The report reviews the events that were emblematic of the changes in trade policy, logistics sector and industrial supply chain operations in 2019,  based on our monthly most-read research review and the more-than 1,300 reports published by Panjiva research in 2019. For each report we outline what it covered, why it mattered and what the data told us.

January – Newark’s new problem is congestion, clearance may just be a matter of time

The event: Congestion built up at many U.S. ports in late 2018 and early 2019 as a result of accelerated shipments to beat tariffs.

Why it mattered: Handling fees were increased and shipments delayed with recovery back to normal taking until later in 1Q, illustrating the fragility of supply chains to even modest disruptions.

What the data showed: There was a 12.8% year over year surge in traffic through the port of Newark / New York in 2018, though the top five freight operators’ market share has been squeezed.

CH ROBINSON AND ORIENT EXPRESS GET AGGRESSIVE IN NEW YORK 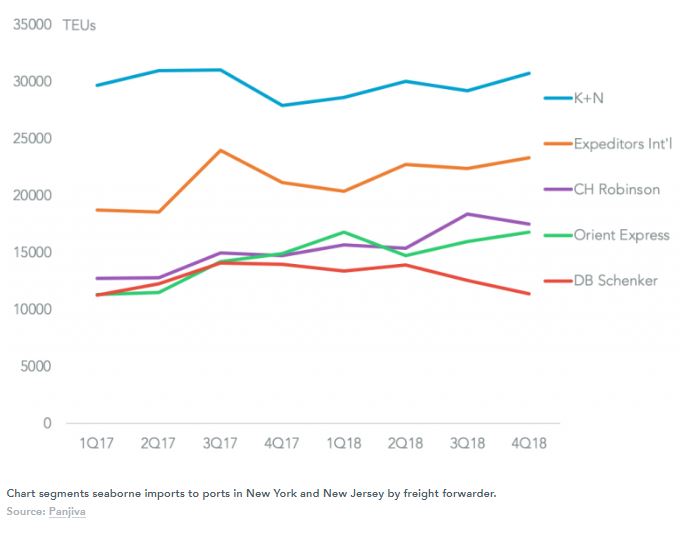 February – Semis only a small segment of a solution

The event: The first of many near-misses in terms of a U.S.-China trade deal included a memorandum of understanding that could have seen China increase its purchases of U.S. products.

Why it mattered: China wanted to include semiconductors in the list, but the heart of the trade war relates to U.S. concerns about China’s technological developments. Needless to say the MoU didn’t evolve into a full deal and negotiations continued through the rest of the year.

What the data showed: The U.S. accounted for less than 10% of China’s semiconductor imports in 2018, while directing 100% of U.S. semiconductor exports to China would only cut the U.S. trade deficit by 8%. 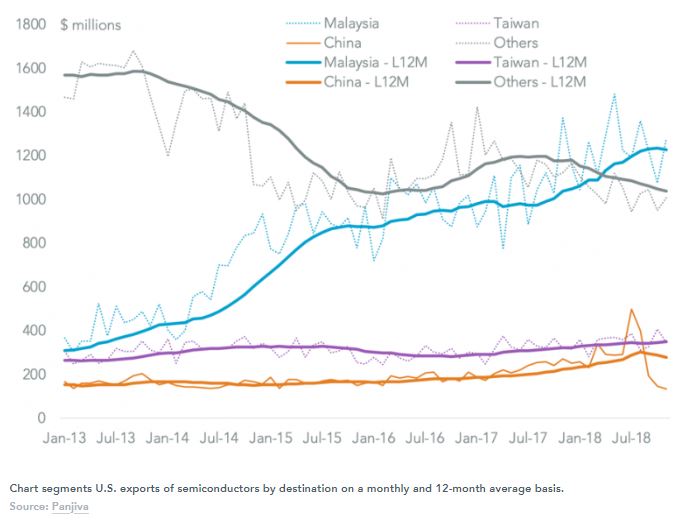 Why it mattered: The logistics sector managed to avoid direct attacks after Maersk and FedEx’s travails in 2017 but Norsk Hydro’s situation showed supply chains are still vulnerable to cyber-security issues.

What the data showed: Importers working with Norsk Hydro that may face a disruption from reduced supplies including Eastman Kodak, Agfa and Southern Lithoplate. 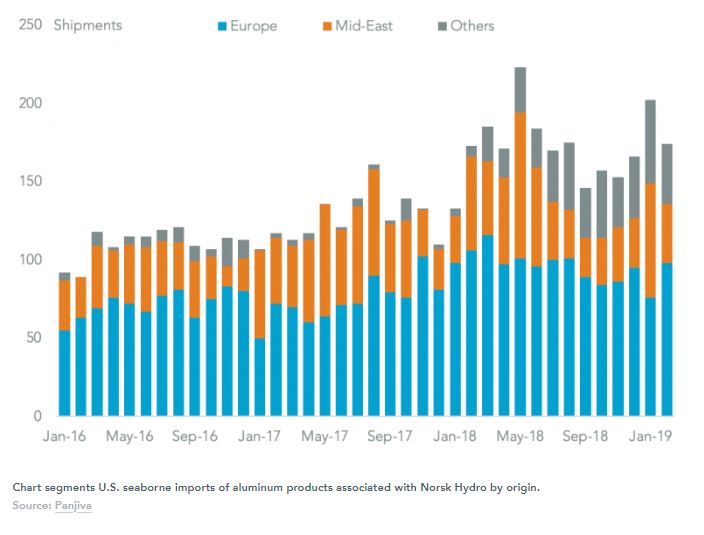 The event: President Trump threatened to close the border with Mexico as a response to continued migrant flows – he latterly also threatened to increase tariffs on all Mexican exports.

Why it mattered: It was just one example of the Trump administration’s use of trade policy in a wider geopolitical context – see more below on Turkey.

What the data showed: Truck-borne bilateral trade between the U.S. and Mexico – which would be disrupted by a closure – reached $484.4 billion in the 12 months to Feb. 28, or 64.5% of all trade between the two countries, with the food sector particularly exposed.

LATE SEASON SUPPLY TROUBLES AHEAD IF BORDER IS CLOSED 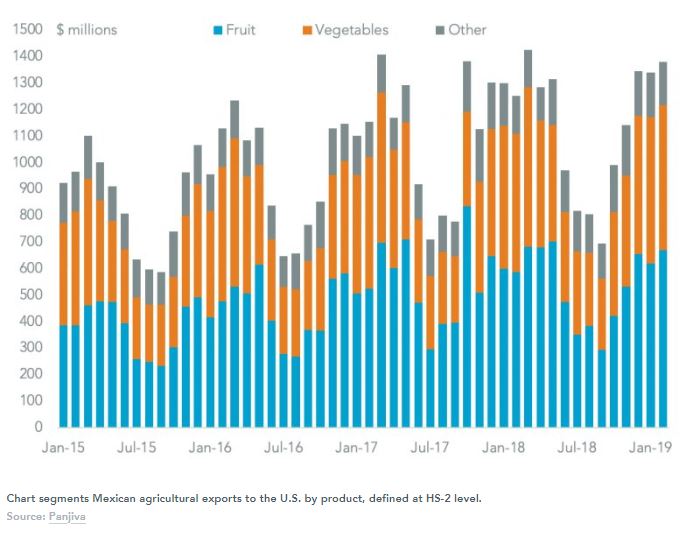 May – Trump’s partly right on who pays for tariffs

The event: The U.S. government increased tariffs on “list 3” products imported from China to 25% from 10%.

Why it mattered: It was a major escalation in the trade war and forced corporations on both sides of the Pacific to further develop their supply chain strategies – Chinese exporters cut their prices for U.S. companies to share the burden.

What the data showed: The most marked price deflation on imports from China has been chemicals where prices fell 5.8% year over year in April.

PRICES DISSOLVE IN CHEMICALS, DEFLATION NOT NEW FOR TECH 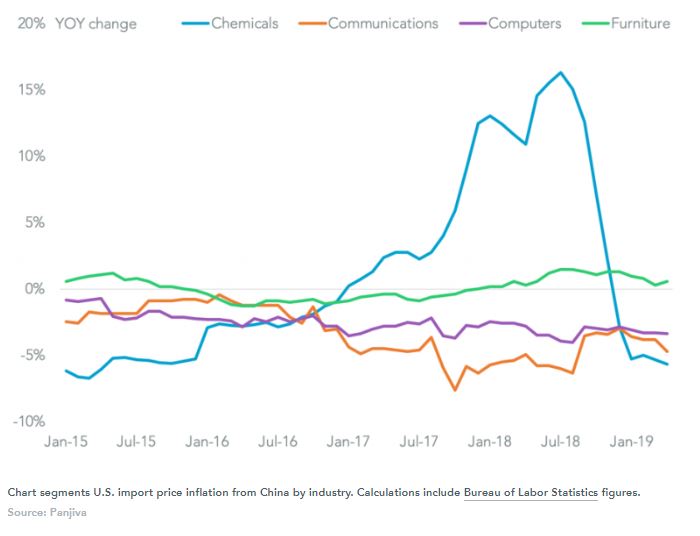 June – Sumitomo, Yazaki Pull the Plug on China By Switching Supplies to Vietnam

The event: Vietnam’s government announced plans to aggressively pursue exporters that transship goods to the U.S. from China via Vietnam.

Why it mattered: The “winners” from the trade war – including Malaysia as well as Vietnam – are increasingly worried about being targeted for tariffs, potentially via a section 301 review.

What the data showed: In the furniture sector 72.8% of the drop in seaborne shipments from China have been replaced by those from Vietnam.

EXPORTS OF CABLES CUT FROM CHINA 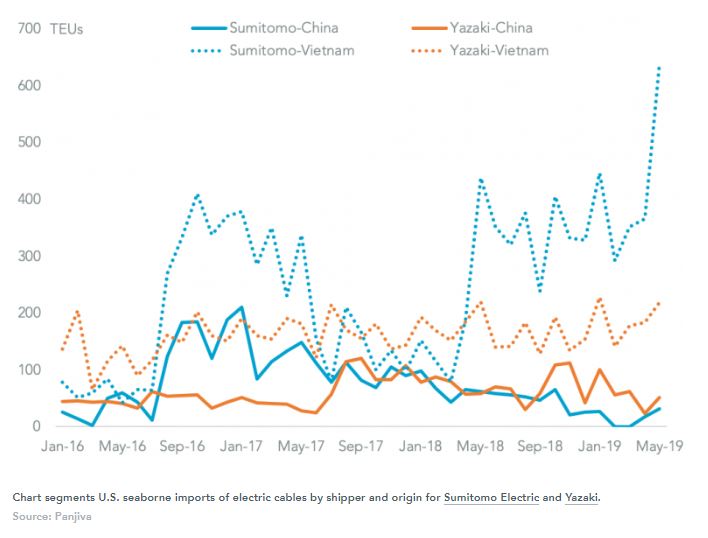 The event: Over 600 retailers wrote to the Trump administration to protest against the application of “list 4” tariffs on exports from China from September.

Why it mattered: The Trump administration subsequently split the list into two groups (list 4A and 4B) with the latter list including seasonally-sensitive products, mitigating the impact on consumers during the holiday shopping season.

What the data showed: May retailers hadn’t yet cut their imports from China, with Target cutting its imports by just 0.7% year over year in 1H 2019 while Walmart increased it by 12.4%. 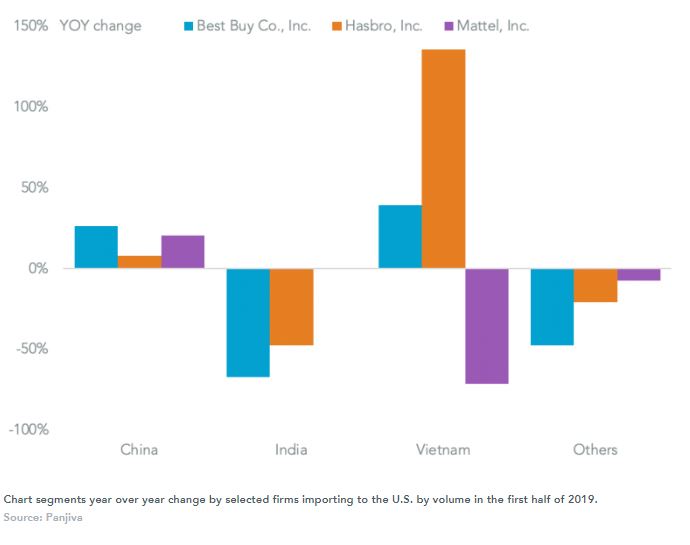 The event: President Trump characterized the EU as being “worse than China” in terms of applying “barriers, tariffs and taxes”.

Why it mattered: Trade talks between the EU and U.S. were stalled for most of the year, with a raising of negative rhetoric coming as the threat of section 232 automotive tariffs overhung the talks. Later in the year the Trump administration applied WTO-sanction tariffs on a wide-range of EU exports. 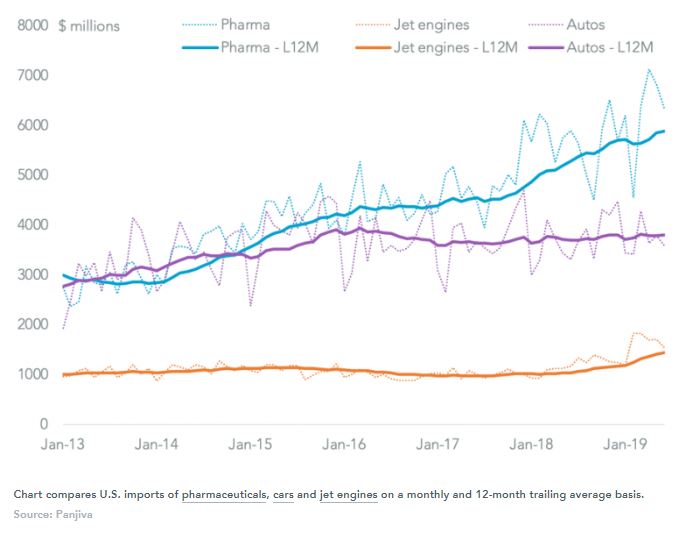 Why it mattered: The assumption had been that oil-related conflict in the Middle East would focus on the Straits of Hormuz – in any event global energy supply chains were disrupted.

What the data showed: U.S. seaborne imports associated with Motiva, Saudi Aramco’s U.S. refining division, consumed 6.7 million tons of imports in the 12 months to Aug. 31, with other importers including Marathon and Phillips 66. 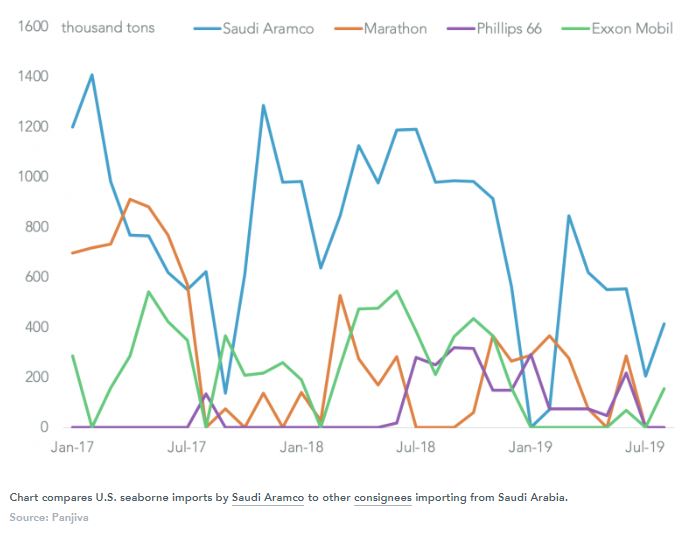 The event: The U.S. government increased section 232 duties on steel imports from Turkey to 50% from 25% in response to Turkish military action in Syria.

Why it mattered: It was another example of the Trump administration using trade policy for geopolitical ends. Notably though the U.S. courts ruled an earlier use of higher section 232 tariffs against Turkey a year earlier was not legitimate, curbing the administration’s ability to use the approach again. 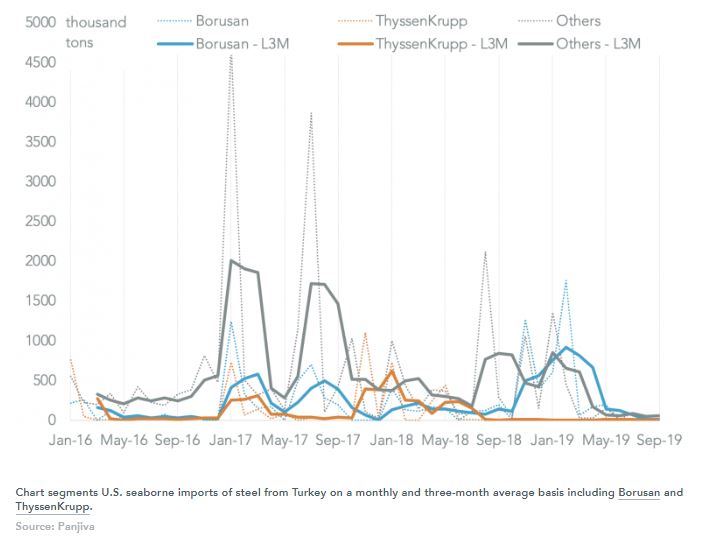 The event: Talks to complete the Regional Comprehensive Economic Partnership (RCEP) trade deal will progress into 2020 without India.

What the data showed: India’s imports of agricultural products from the RCEP region reached $11.0 billion in the 12 months to Jul. 31 while its exports were just $8.1 billion. 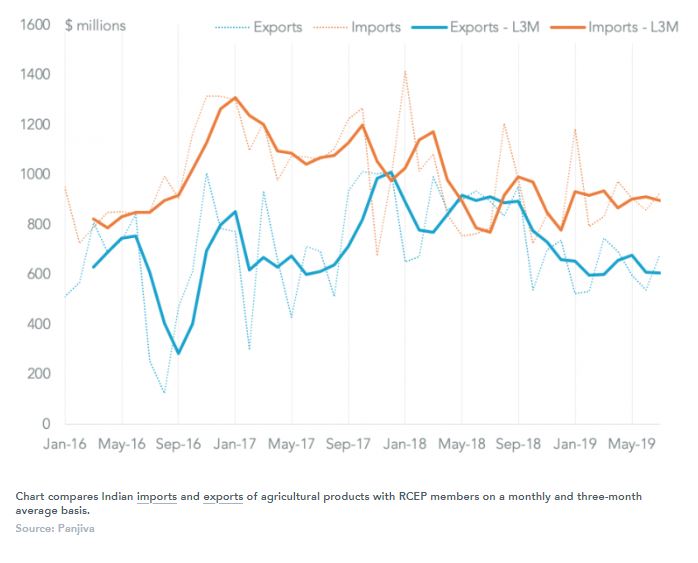 The event: The U.S. and China provisionally agreed a phase 1 trade deal that included Chinese commitments to policy change and significant purchase commitments while the U.S. rolled out part of September’s tariff increase.

Why it mattered: The deal still has to go through the translation and legal review processes, leaving room for a failure but nonetheless leading to a pause in trade war hostilities between the two countries and providing the Trump administration with a demonstrable win going into the election year.

What the data showed: The Chinese commitment to increase purchases from the U.S. by $200 billion in 2020 and 2021 versus 2017 involves some heroic assumptions can be done. Shipping 100% of U.S. crude oil, LNG and soybean exports, adding 50% to non-soybean agricultural sales, increase shipments of electronic components and boosting financial services sales could deliver $100 billion of extra exports annually. 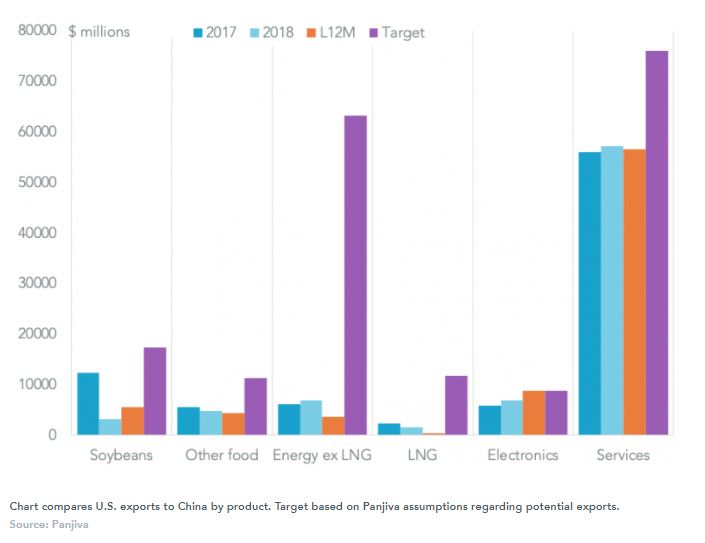