Android Automotive is taking over, but what about Google Automotive Services (GAS)?

With the Android Automotive Operating System (OS), Google is set to make the sharpest rise in the infotainment system space in the next five years. From its introduction in 2017 until now, the operating system has already been integrated in 13 vehicle models with many more to follow. The standout feature is Google Automotive Services (GAS). The GAS suite provides options for automakers to embed a series of services from Google, including Maps, Play Store, and Assistant. GAS are offered through a licensing model to automakers and is built on top of the Android Automotive OS.

Geely (Polestar and Volvo): Apart from the Polestar 2, which was the first model to use Android Automotive, Volvo's all-electric XC40 P8 and XC40 Recharge also leverages the operating system. In April 2022, Volvo extended the services to XC90 and V60 models. The Android Automotive OS is also available in model year (MY) 2022 and future S90, V90, V90 Cross Country, and XC60 models; while the Volvo XC90, S60, V60, V60 Cross Country, and XC40 vehicles from MY 2023 are next to receive the OS.

Renault-Nissan-Mitsubishi: In September 2021, Renault partnered with Qualcomm and Google to power the digital cockpit of the Mégane E-Tech electric vehicle (EV) with the Android Automotive OS. The Austral model, which should launch in September 2022, is the next in line to be updated with the OS. In 2018, the Renault-Nissan-Mitsubishi Alliance announced a partnership with Google to integrate the OS across "multiple models and brands."

General Motors: The Hummer EV became the GM model to integrate the Android Automotive OS with the full suite of GAS. Apart from the HUMMER EV Pickup, GMC also reported that GAS will be available in the 2022 Yukon and Yukon XL and select trim levels of the 2022 GMC Sierra 1500. GAS is also available in select 2022 Chevrolet Tahoe, Suburban, and Silverado models, and on the 2023 Cadillac Lyriq model.

Stellantis: There are plans to launch the OS in its vehicles starting in 2023. Maserati was the first brand in this umbrella to announce Android Automotive integration before the FCA-PSA merger, including the Ghibli, Levante, and Quattroporte in addition to the Chrysler Pacifica and Dodge Durango.

Ford: Earlier in 2022, Ford said that the launch of vehicles with Android Automotive will be delayed after announcing the OS will be launched on "multiple Ford and Lincoln models."

Lucid: Despite the Android Automotive OS announcement, Lucid is integrating its own unique apps and using Amazon Alexa as the primary voice assistant.

Honda: In September 2021, the Japanese automaker said that it would launch vehicles with Android Automotive starting in 2022 but did not specify the names of the models.

BMW: In June, the German carmaker announced that it would be expanding its BMW OS 8 and integrating Android Automotive OS into certain model series. 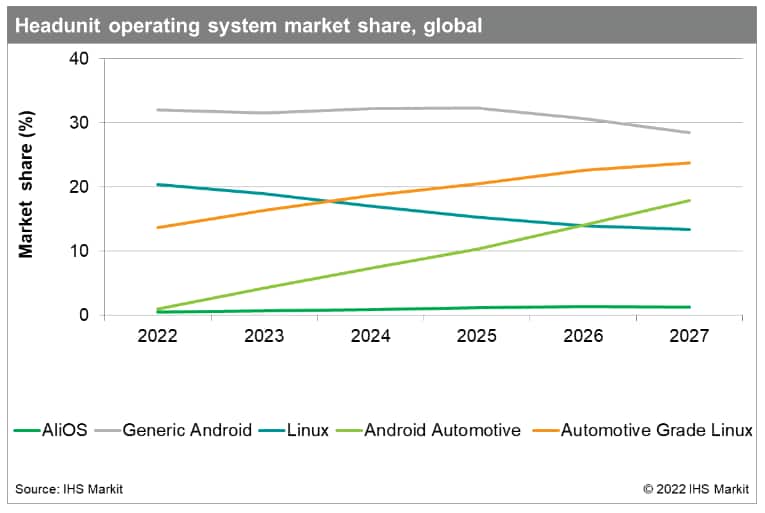 According to S&P Global's Feature Technology Benchmarking, the growth rate for Android Automotive deployment should be the biggest in the next five years. Android Automotive will likely capture around 18% of the market share by 2027 compared with around 1% currently. QNX, one of the leading proprietary automotive OS, has already seen its market share drop from over 18% in 2020 to around 14% in 2022, and we expect it will plunge to just over 5% by 2027. This is a direct result of the growth of Android Automotive and Automotive Grade Linux (AGL). We forecast AGL to rise from its current 13.7% share to around 23% of the overall market share by 2026. Generic Android, which holds around 32% of the share currently, will marginally decline by 2026 but should still make up over a quarter of the overall market. Unlike Android Automotive, which is a proprietary product of Google, Generic Android consists of an open-source model.

In April 2022, Volvo announced an over-the-air (OTA) upgrade to a newer version of Android Automotive OS with access to new app categories on Google Play, including navigation, charging, and parking. With various upgrades expected over the next couple of years, over 80% of Volvo cars could run on Android Automotive OS by 2027.

While announcements of Android Automotive continue to make headlines, the real focus should be applied to those brands on their way to adopting GAS—which brings major user experience (UX) and license cost implications. Many of these announcements including Rivian, BMW, and Stellantis with Uconnect 5 are in fact still running off a base of Generic Android without the entire Google package of operating system, middleware, platform, and of course GAS. GAS has brought with it the revival of the in-vehicle app store, leveraging more than ever from the consumer electronics world compared to previous versions we have seen in the past. While only 41 apps are currently available through the Play Store on Android Automotive, the list of vehicle use-case (or at least vehicle-optimized) specific apps will continue to grow as adoption increases the customer base for automakers and developers alike.

This does not mean GAS is without competition—far from it. Brands such as Lucid and BMW are very focused on differentiating in this space and have determined the best way forward to a customized app environment, is to create an experience unique to their brand identity. Apple CarPlay's major upgrade announced earlier in June also paves the way for a Cupertino-themed interior, should an automaker wish to allow core vehicle data to enter CarPlay's domain, which could provide a very competitive environment from an end customer perspective as well. Time will tell whether automakers will agree to adopt the new version of Apple Carplay or not, but the automotive infotainment space is certainly heating up—with Google currently taking the lead.

The above article is from AutoTechInsight by S&P Global Mobility. AutoTechInsight is a business intelligence platform providing access to a wealth of original research, analysis, forecasting, and thought leadership within automotive technology, the vehicle eco-system, and the supporting supply chain. To learn more, click here.