US connected video devices on course to beat 1.1 billion installed through 2026


US connected video devices on course to beat 1.1 billion installed through 2026

The U.S. installed base for internet-connected video devices is on course to rise at a 2.3% compound annual growth rate from 2021 through 2026, falling only slightly behind high-speed broadband household growth. Kagan's forecast anticipates a relatively stable 8.5 devices per broadband household throughout the forecast, reflecting a saturation point for streaming video devices.

Kagan estimates that connected video devices in the U.S. rose above 1 billion for the first time in 2021, evidence that consumers have fully embraced the streaming revolution. The ubiquity of streaming hardware in the U.S., at nearly 3 devices per person, adds context to the content segment's drift toward ad-supported models. Subscription services have served the segment well so far, but there is an opportunity to further monetize this wide device universe through low- and no-cost services. 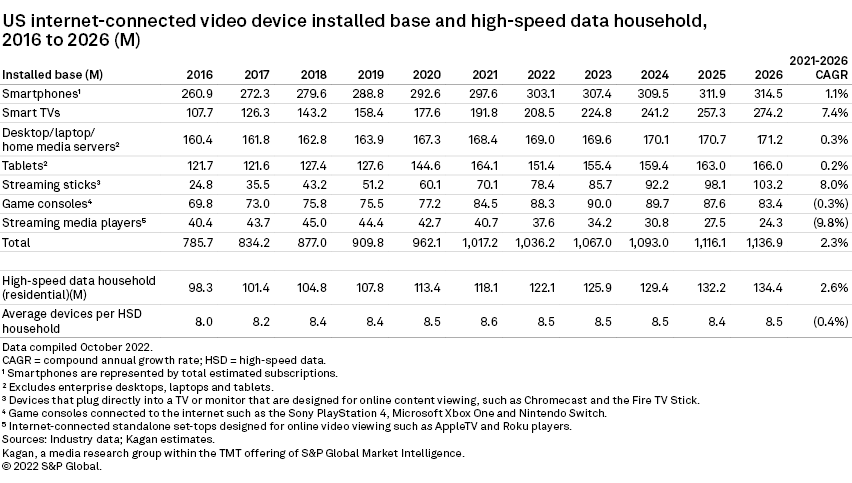 Of the devices in our analysis, smart TVs have the highest growth potential as vendors and end users fully embrace online platforms for their primary viewing. The game console segment has the highest risk of contraction as cloud gaming begins to make discrete and dedicated gaming hardware redundant.

Streaming media players and sticks still have some opportunity to grow as a low-cost way to upgrade an older TV set, but leading smart TV vendors' focus on proprietary FAST services will incentivize hardware solutions with long-term potential, offsetting the need for external devices.

Note that some devices in this analysis, particularly game consoles and streaming media devices, could be connected to the same TV or to smart TVs, which already have built-in streaming capabilities.

More than just a tool for voice communication, smartphones have become staple consumer products that have supplanted desktop computers for many applications. These devices are so common that the vast majority of American consumers already own at least one, making population growth the main driver for the smartphone installed base growth which is estimated at 1.1% CAGR from 2021 through 2026.

In recent years, carriers have been heavily promoting 5G while simultaneously phasing out the older 2G and 3G services in an effort to nudge consumers toward new 5G smartphones. This helped drive smartphone installed base growth, albeit only slightly, as it pulled in holdouts that were still using basic feature phones.

Looking at smartphone users by operating system shows that Alphabet Inc.'s Android took the lead in 2010 and has held it since. Apple Inc.'s iOS follows closely behind and has been steadily gaining ground since 2018. At the end of 2022, we expect user shares of 56% and 41% for Android and iPhone, respectively. 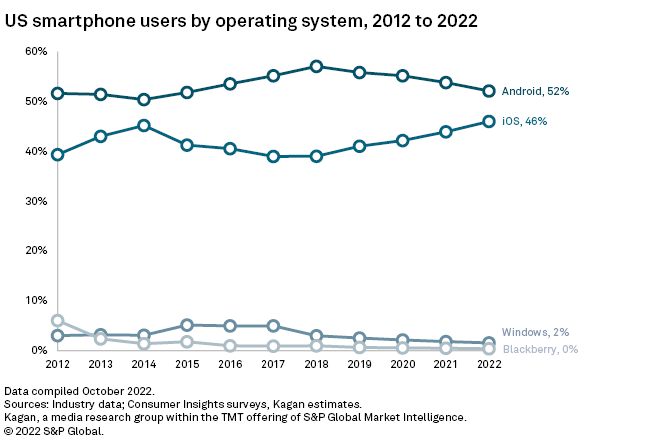 PC growth is slowing as smartphone and tablet functionality improves and expands, slowly eating into the home computer's domain as more light computing tasks are increasingly being done on mobile devices. In 2020 and 2021, tablets saw more use than ever as productivity devices for both schoolwork and business as they were adequate for tasks that didn't require the beefy computational performance of a traditional desktop or laptop computer.

Beyond productivity, a significant chunk of the increased demand for tablets during this time was driven by the need for entertainment, although this trend leveled off as public spaces reopened. This is expected to result in a 7.7% year-over-year drop in the tablet installed base by the end of 2022 and a nearly flat 0.2% CAGR from 2021 to 2026.

Consumer tablet users (including both 4G/5G and Wi-Fi-only models) are expected to exceed 150 million at year-end 2022, with iPad still leading the way in share at around half of the total. The tablet space has primarily been a three-way race between Apple, Amazon.com Inc. and Samsung Electronics Co. Ltd. since 2017. 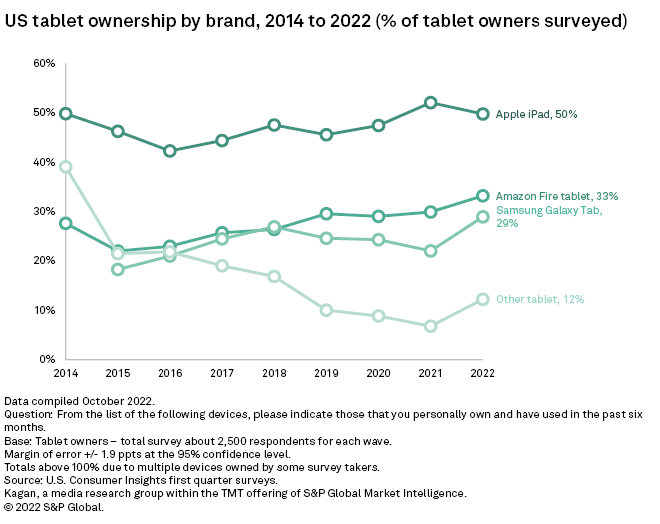 The installed base for PCs also saw a mild bump in 2020 as work from home and distance learning became the norm but this trend was not sustained for long, similar to tablets. PCs will continue to be challenged by tablets and smartphones in the future, especially as consumers decide whether PCs are strictly necessary in the modern home beyond gaming. PC installed base growth is forecast to reach 0.3% CAGR from 2021 through 2026, staying just ahead of tablets. 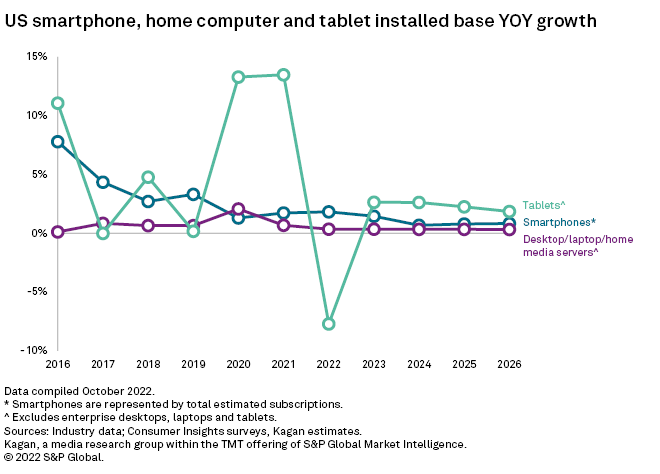 Smart TVs are one of the fastest-growing product groups among internet-connected video devices, having replaced traditional HDTV sets on store shelves and now accounting for more than half of all TVs in American homes. Smart TV shipments slipped in 2021 from lingering component shortages but are expected to return to growth through 2026 with the installed base expected to expand at a 7.4% CAGR over the same period as 4K and 8K smart TVs continue to replace traditional HDTVs. 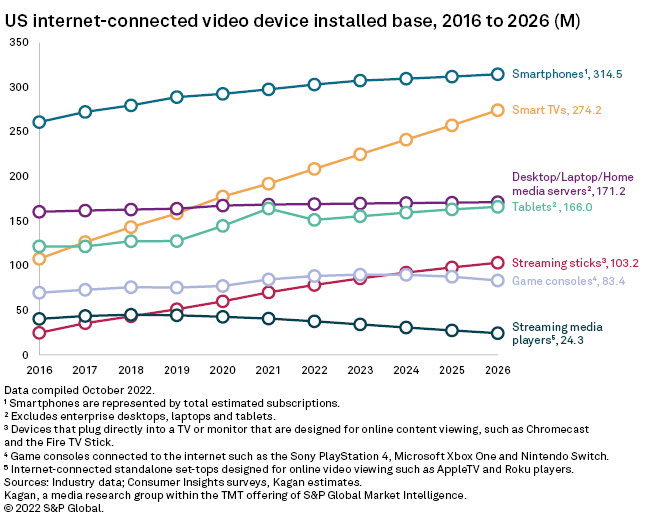 The increasing availability of 4K video content, through online streaming services as well as through physical media such as Ultra HD Blu-ray, has made the upgrade to 4K very appealing for U.S. consumers. This helps sustain the expansion of the 4K and 8K TV installed base in the U.S., which in turn supports the overall TV installed base, which is set to grow more slowly at an estimated 0.4% CAGR over the same period.

More details on the U.S. TV set installed base and shipments through 2026 are available here.

The combined markets of streaming media players and streaming sticks, also referred to as streaming media devices or SMDs, expanded rapidly over the past decade, but growth is slowing as increasingly capable smart TVs offset demand. We expect the combined installed base to grow at a 2.9% CAGR over the forecast to 127.5 million units.

Streaming media players, such as Roku Inc.'s Roku box and the Apple TV, held the lion's share of the SMD installed base as of 2018, but their value proposition diminished as the performance of more affordable streaming sticks improved. We expect the installed base to remain heavily weighted toward sticks over the forecast. 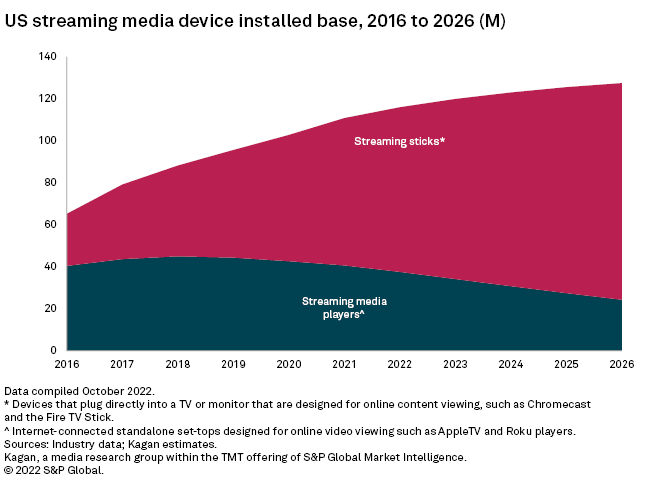 The game console market merged with the connected video devices universe in 2006 when Sony Group Corp. and Microsoft Corp. began selling downloadable movies through the PlayStation 3 and Xbox 360.

The number of connected consoles soared after Netflix Inc. launched as an app for the Xbox 360 in 2008, the PS3 in 2009 and the Wii in 2010. Soon, other streaming services followed suit and launched their apps onto the consoles.

Similar to tablets, game consoles saw an increase in installed base growth during the start of the pandemic due to strong demand for entertainment from consumers that were stuck at home.

However, the U.S. game console installed base is forecast to decline at a 0.3% CAGR from 2021 through 2026 as gaming gradually shifts to the cloud. Cloud gaming can be accessed through smart TVs, streaming media devices, smartphones and other hardware many consumers already own, and we expect that dynamic to modestly offset demand for game consoles over the forecast.

The U.S. is likely to enter this transition faster than other markets because of its high penetration of streaming-capable devices and because many of the top cloud gaming operators, including Microsoft, are based in the U.S. and are focused on their domestic market.