Preliminary analysis of budgets gathered for 2022 shows that the total annual global nonferrous exploration budget increased 16% to $13.0 billion from $11.2 billion in 2021.

The recently released global exploration budget data for 2022 from S&P Global Commodity Insight's Corporate Exploration Strategies, or CES, series shows that the COVID-19 pandemic recovery, which began in mid-2020, continued through 2021 and into early 2022. Strong metals prices and financing conditions encouraged the industry — particularly the junior explorers — to continue investment in their exploration programs. Preliminary analysis of budgets gathered for 2022 shows that the total annual global nonferrous exploration budget increased 16% to $13.0 billion from $11.2 billion in 2021.

Positive sentiment from the pandemic recovery, combined with energy transition aspirations, continued through 2021 into early 2022, resulting in a 16% increase in the aggregate nonferrous exploration budget in 2022, to $13.0 billion. The junior sector made up the bulk of the increase as beneficial market conditions meant many dormant companies reactivated and new players entered the sector. Moving through 2022, market conditions have, however, steadily worsened. Current expectations for 2023 are for a low double-digit percentage decrease in budgets should the negative trends continue.

Our survey of 2,900 public and private companies in 2022 revealed that the global aggregate nonferrous budget increased 16% year over year, to $13.0 billion. Incorporating an assessment of budgets by companies spending less than $100,000 and entities with limited visibility increased the 2022 estimated budget to $13.7 billion, a $1.9 billion rise from 2021. 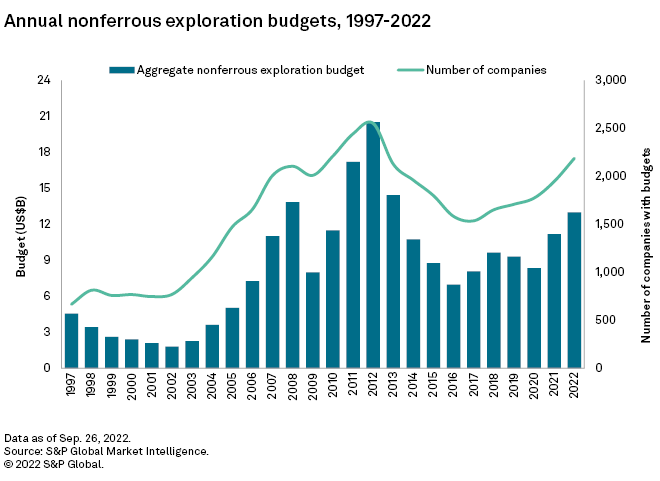 The global spread of COVID-19 in the first half of 2020 vaporized initial optimism in late 2019 and early 2020 toward global markets and the metals and mining industry. The pandemic-induced downturn in the mining industry was deep but short-lived. By mid-2020, exploration programs had resumed and market conditions had improved significantly. While this was too late to influence the aggregate 2020 exploration budget total, which decreased 10%, it allowed explorers to spend more than initially planned.

During 2021, escalating interest in the energy transition, as part of a global move to reduce carbon emissions, boosted the industry's recovery from the pandemic. Some battery metals prices hit all-time highs, which in turn resulted in better market conditions and increased exploration financings during the year. The exploration sector responded with a strong 34% increase in budgets to $11.2 billion, driven by a resurgent junior sector. With the industry on a general upward trend throughout 2021, companies also managed to spend 5.9% more than their total budget.

The positivity of 2021 continued into early 2022, although global macroeconomic uncertainties emerged, centered on concerns over rising inflation. Moving into the June quarter, the fallout from Russia's invasion of Ukraine pushed several metals prices to hit all-time highs, exacerbating high inflation in many North American and European economies. As the governments reported soaring inflation levels month over month, central banks' efforts to address the concerns brought about declining economic outlooks, including weakening demand projections for commodities and sliding metals prices, trends that will continue in the December quarter.

Despite these warning signs, the exploration sector managed to increase allocations for 2022 by 16% to $13.0 billion, with the bulk of the increase again coming from the junior sector, which also led a 12% increase in the number of companies exploring to 2,189. 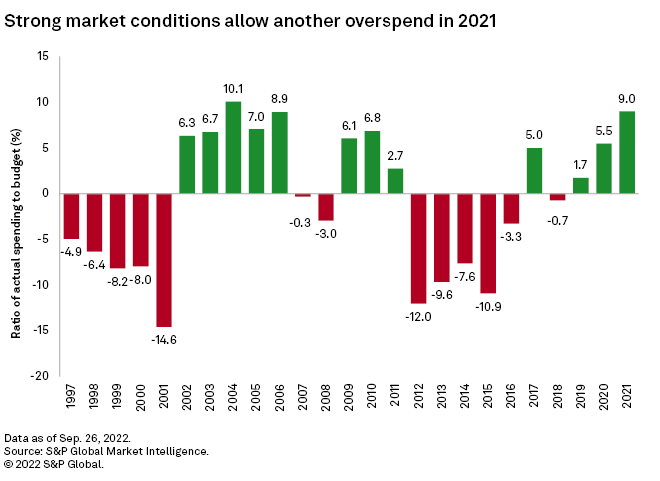 As the end of 2022 approaches, we feel cautious about our 2023 outlook. Both metals prices and financings have tapered since the start of 2022, with all indications pointing to the reductions persisting into early 2023. Given the variety of downside factors, we expect exploration budgets to fall between 10% and 20% in 2023. The steepness of any decline will depend on the next several months, when the sector usually begins planning its next-year program and tapping the market for the necessary funding.

While we expect 2023 to be a down year, we also envision an overall upward trend in exploration spending over the medium term as increases in demand strain the supply pipeline for many commodities. This should result in increased expenditures as companies attempt to bridge the supply-demand gap, perhaps as early as 2024.

Gold remains the driving force in global exploration budgets, although green metals — specifically copper, nickel and lithium — had larger percentage increases in 2022. On a dollar basis, the majority of the budget increase went to gold, which increased 12%, or $722 million, to $6.92 billion. This increase is unsurprising given that 40% of the financing activity in the second half of 2021 and through 2022 has been directed to gold companies or projects and the bulk of drilling has focused on gold projects.

The combined increases for copper, nickel and lithium totaled $893 million, nearly half of the total increase in all nonferrous exploration in 2022, compared with the $688 million, or 24%, combined increase in 2021. While copper continues to trail gold in budget size, the red metal had a larger percentage increase, of 21% to a total of $2.80 billion — its highest since 2014. The budgets for nickel jumped to a 10-year high at $612 million, up 45% year over year. While copper and nickel have already recovered ground lost during the COVID-19-induced slowdown in 2020, zinc-lead continues to struggle with the budget increasing only 2% to $467 million. Lithium jumped 88% to $467 million, its highest since we began to individually track its exploration budgets in 2010. Uranium budgets jumped to a five-year high with a 60% increase to $216 million, attributable to revived interests in nuclear power generation.

Notably, the silver budget decreased this year, by $16 million to $628 million, due to a lower budget in Latin America, notably Mexico. Mexico has been a relative underperformer in 2022 budgeting, after its government nationalized lithium resources in April. This has undoubtedly disconcerted companies, resulting in a risk-off approach in the budgeting process. 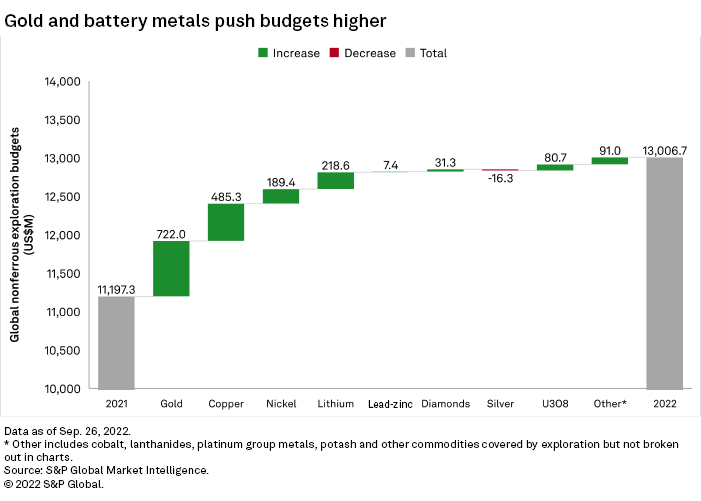 Allocation to all regions increased in 2022 except our Rest of world region. Among the gainers, Latin America contributed the largest increase, up $603 million, or 23%, to $3.26 billion. Chile, Peru, Argentina and Ecuador contributed the most to the region's performance, although it was slightly weighed down by subpar increases in Mexico and Colombia.

Canada closely followed with a $596 million increase, up 29% to $2.68 billion. This continued the 2021 trend with countries having a strong junior presence, such as Canada and Australia, having above-average increases on the back of increased junior-sector spending. Australia's $419 million increase was well short of Canada's growth, resulting in a wider gap between the two countries year over year.

Regional budgets for Rest of world, comprising Europe and mainland Asia, decreased 15%, or $271 million. The downward pressure came from Russia's 32% decline due to international sanctions following its invasion of Ukraine, with many explorers and producers limiting their activities in the country. The Chinese government's ongoing Zero-COVID policy has pulled budgets for the country 11% lower, dampening the recovery of the world's second-largest economy, with the risk of lockdowns and restrictions continuing in its major cities.

Note: Given their size and importance to the industry, Canada, Australia and the U.S. are treated as regions for the purpose of continental-scale comparisons. 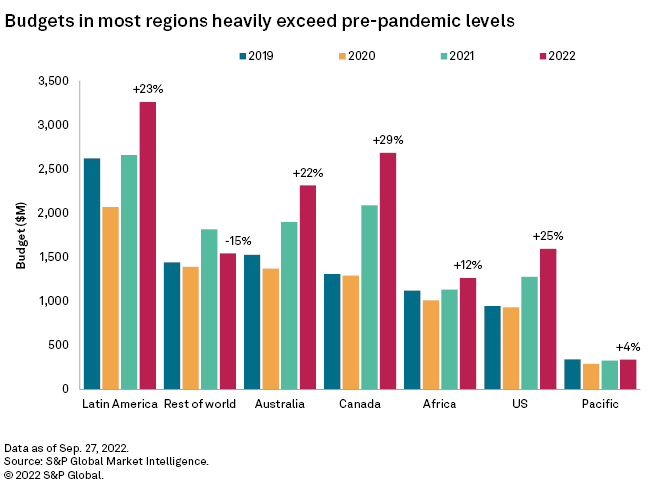 Junior explorers continue to be the driving force in the post-pandemic exploration recovery despite a lower growth of 37% to $5.61 billion in 2022 compared with a 61% increase in 2021. Junior companies have benefited from the strong monthly financing activity that peaked at $3.69 billion in March 2021, allowing these mostly nonproducing companies to allocate more resources to drilling and evaluation. Stronger financing conditions have also encouraged some dormant companies to reactivate and have attracted new entrants to the industry. The junior sector has contributed the most to the year-over-year increase in the global budget.

While the majors are still ahead in terms of total planned spending, the juniors are slowly closing the gap, with the former posting a mediocre 5% increase year over year to $5.86 billion. While the majors still account for the lion's share of exploration budgets at 45%, it is a considerable decline from their 53% shares reported in 2019 and 2020. Meanwhile, the juniors' share has jumped to 43% from just 30% over the same period. The last time the juniors accounted for the largest share of exploration was in 2011, at 44%. 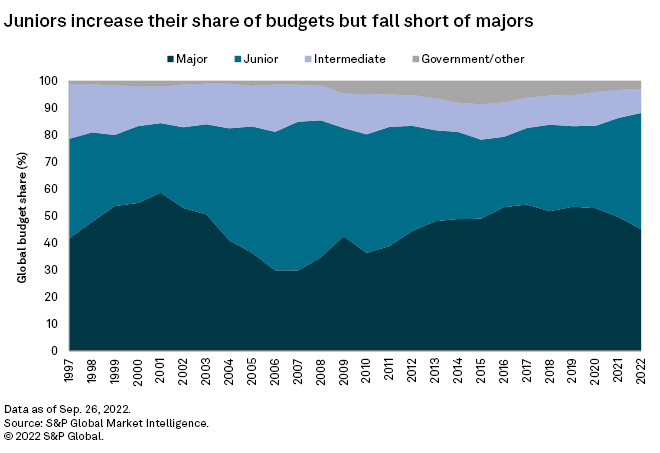 Risk usually overcomes the appeal of potential new discoveries, making the higher-than-average growth in grassroots exploration we recorded in 2021 appear to be a nonpersisting trend. While financing activity remains strong in 2022, it has not been as strong as in 2021, likely pushing explorers to be more risk-averse and to focus on projects that are more likely to pay dividends. 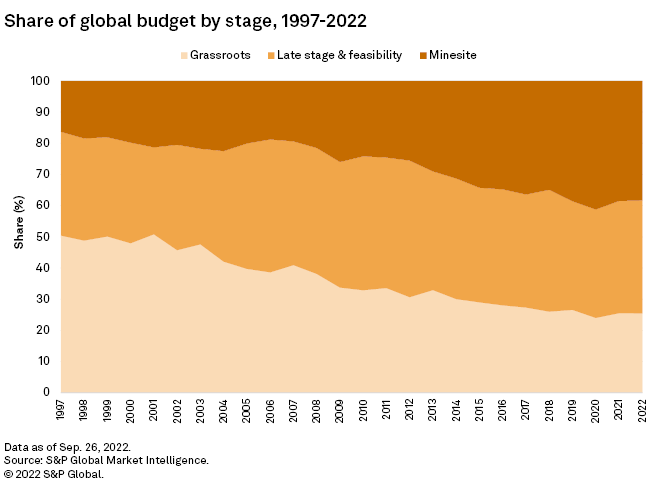