The $65 billion earmarked for broadband within the proposed $1-trillion infrastructure bill will primarily aim at closing a U.S. digital divide that expanded during the COVID-19 pandemic, according to a Kagan analysis of the nation's broadband take rate across various household density areas.

As of March 31, the spread between the areas with the highest and the lowest rates of broadband penetration stood at 35.6 percentage points, according to our breakout of counties based on the average number of households per square mile. 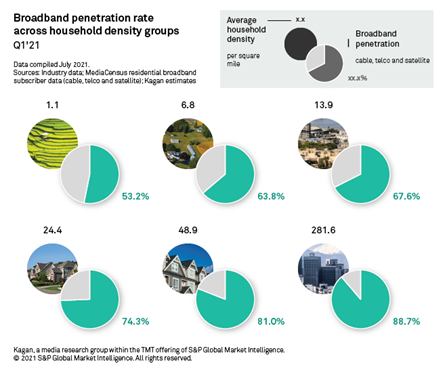 The most rural segment, made up of counties averaging 1.1 households per square mile, had an estimated 53.2% residential broadband penetration rate at the end of the first quarter of 2021. Note that our analysis revolved around MediaCensus residential subscriber estimates for cable, telco and satellite only, and does not include fixed or mobile broadband as a household solution.

The most densely populated category, featuring counties averaging about 282 households per square mile, boasted a broadband penetration rate hovering around 89% — up 4.4 percentage points since the end of 2019.

Overall, we estimate that the U.S. still counted more than 20 million households without a broadband subscription in the first quarter. President Joe Biden, in remarks at the White House on June 24, said the then proposed $1.2-trillion Bipartisan Infrastructure Framework would "deliver high-speed Internet to every American home, bringing down the price that people pay now for Internet service."

A White House statement released the same day underscored the criticality of the effort, equating broadband infrastructure spending to the federal government effort to "provide electricity to every American nearly one hundred years ago."

The proposed infrastructure bill comes on the heels of phase one of the Rural Digital Opportunity Fund, through which the Federal Communications Commission expects to contribute $9.23 billion over 10 years to deploy broadband in underserved areas.