PayPal Holdings Inc. saw record amounts of payment volume and new accounts on its platform in recent months due to dramatic shifts in consumer behavior caused by COVID-19. The company's position as a trusted financial brand in the U.S. along with its limited exposure to the physical point-of-sale market should position it to weather coronavirus impacts better than many competitors.

PayPal is also likely to benefit long term should the pandemic act as a catalyst shifting more consumers to digital payment channels. The company, along with rival digital wallet providers, has been expanding the functionality of its products. As a larger share of purchase volume flows through these platforms, more customers may leave funds deposited in their in-app accounts, ripe for monetization by these wallet providers.

PayPal added 10 million net new accounts to the platform organically in the first quarter, up from 9.3 million in the same period last year. In April alone, the company added 7.4 million net new accounts. It expects the total figure for the second quarter to exceed 15 million. The steep increases in new account additions as consumers look for efficient online payment options is likely driven, in part, by perceptions of PayPal's trustworthiness. 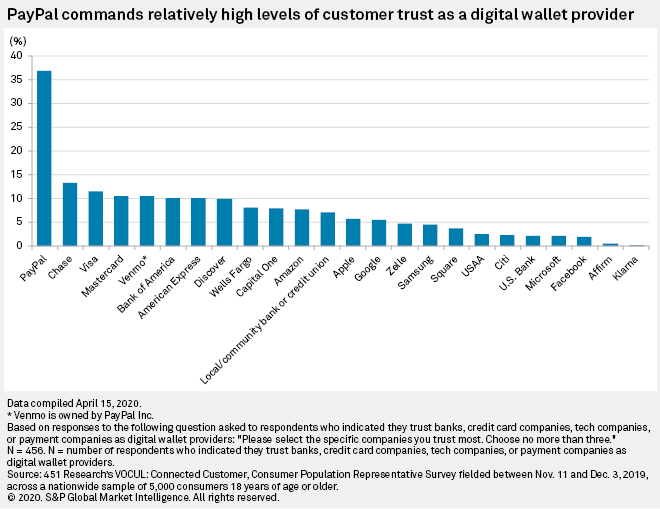 PayPal leads other payment companies and financial institutions in customer trust by a significant margin, according to a fourth-quarter 2019 survey conducted by 451 Research, which is part of S&P Global Market Intelligence. PayPal's position as a trusted brand has helped drive significant adoption of its digital wallet product. More survey respondents used the PayPal digital wallet to make purchases and send peer-to-peer payments in the fourth quarter than other prominent products such as Apple Pay, Google Pay and Square's Cash App. Nearly 69% of respondents cited privacy and security concerns as a factor keeping them from storing payment information on merchant websites. These concerns should make PayPal's status as a trusted service provider a valuable asset in the competition for market share. PayPal is well-positioned to absorb new customer demand for digital payments as the effects of COVID-19 on consumer behavior shift a larger proportion of purchases online.

Capitalizing on the shift to digital

As both a payment instrument and a payment processor, PayPal has struggled over the years to build out a meaningful presence at the point-of-sale. Now, with the global coronavirus outbreak leading to extensive store closures and dramatic declines in card-present spending, its digital commerce focus has proven to be more prescient than problematic.

On May 1, the company saw the largest single day of transactions in its history, President and CEO Daniel Schulman said on a May 6 earnings call. Underscoring the growing importance of digital channels, 52% of U.S. merchants surveyed by 451 Research in mid-March expected their online sales to be higher due to the coronavirus outbreak. With its significant online footprint, PayPal will be a key beneficiary of this shift in purchase behavior. 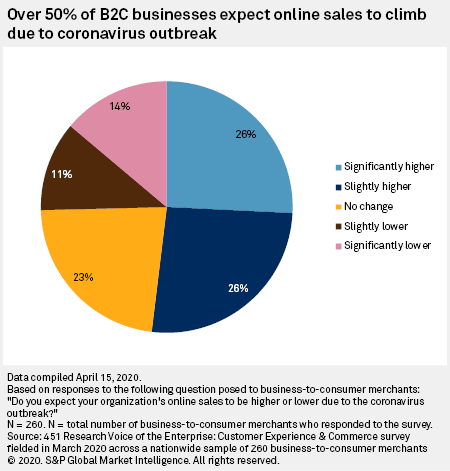 PayPal had 24 million active merchant accounts at the close of 2019, and it is broadly accepted across prominent online retailers. On the consumer front, 451 Research's fourth-quarter 2019 survey shows that 43% of respondents had used digital wallets to make a purchase over the past 90 days. More than two-thirds of those respondents used PayPal — well over 2x the adoption of its next closest competitor. PayPal also has the advantage of multiple strategic levers, such as Venmo and PayPal Credit, which can be used to court various demographics that are shifting more of their commerce activity online.

The company has seen softness in some of its merchant verticals and will undoubtedly feel pressure from softening purchase volume across several e-commerce verticals should the economic ramifications of the shutdown continue to worsen. But it also has the benefit of tailwinds from both "non-essential" and "essential" businesses ramping up online sales in response to social distancing requirements. Online purchasing behaviors adopted during the crisis — such as using PayPal for in-store pickup at Home Depot Inc. or paying for meals through Grubhub Inc. with Venmo — are likely to become habitual post-outbreak for some consumers. This should serve to catalyze the shift of in-store payment volumes online, further expanding PayPal's payment volume opportunity.

Feature expansion and its ramifications

Card companies will still participate significantly in the shift to digital wallet-based payments in the U.S. Both Visa Inc. and Mastercard Inc. announced double-digit year-over-year increases in card-not-present transaction volume in recent weeks. Consumers have shown a preference for funding digital wallet transactions with cards for some time. According to the Federal Reserve's 2018 Survey of Consumer Payment Choice, about three-quarters of respondents who made mobile payments funded their mobile payments with either a debit or credit card.

Some portion of the funds involved in new payment volume facilitated by digital wallet providers will remain circulating within their ecosystems. Becoming the primary source of funds for their customers, as opposed to a connected bank account or card, allows the digital wallet providers to retain a larger portion of transaction revenue while opening up new monetization channels. Digital wallet providers such as PayPal and Apple have been making efforts to enhance the value of their payment ecosystems in recent years through various feature expansions. They are doing this partly to incentivize users to keep their in-app accounts funded. For example, Apple launched its Apple Cash product in December 2017 to allow users to make peer-to-peer payments through their Apple Pay wallets. PayPal and Square Inc. provide debit cards linked to their various digital wallet products so that funds can be tapped for in-store purchases.

The investments may be paying off. The Fed survey showed that about 30% of PayPal users tapped money stored with PayPal as their primary funding source in 2018, up from 21% in 2015. The percentage of respondents adopting a digital nonbank payment account such as PayPal, Apple Pay, or Samsung Pay increased from 40% to 60% over the same period.

The recent stimulus is proving to be a potent customer acquisition tool for digital wallet providers that allow users to deposit their stimulus payments directly into their in-app accounts. Square increased the number of Cash App users with direct deposit access from 3 million to 14 million in a span of four weeks, Chairman, President and CEO Jack Dorsey said on a May 6 earnings call. Meanwhile, Venmo launched a direct deposit feature that allows users to have their paychecks deposited directly into their Venmo accounts. The feature is currently available to a limited number of Venmo debit card holders, but it is likely to expand to a broader user base over time and could greatly augment the amount of funds stored in accounts.

No payments provider is likely to remain unscathed by the demand shock created by the COVID-19 pandemic. PayPal has pulled its full-year guidance due to the uncertainty surrounding the current economic environment. However, PayPal's relative position in the market remains strong. Its minimal exposure to physical point-of-sale products will allow it to avoid financial pressure that some its major competitors will have to endure. Meanwhile, PayPal's position as a highly trusted digital wallet provider may attract a larger share of the purchase volume that gets redirected to digital channels.