DAZN Ltd.'s aggressive and expensive bid to tackle the global streaming sports market has seen paid subscribers and revenues soar since launch. However, profits remain an elusive goal for the group. The U.K.-based firm launched its DAZN streaming service in Europe and Japan in 2016 and added markets including Canada, the U.S. and Brazil between 2017 and 2019, before rolling out globally in late 2020. Soccer rights are DAZN's primary draw in its core European and Asia-Pacific markets, but the service also streams a variety of other sports such as boxing, combat sports, basketball, baseball and motorsports in select regions. DAZN is majority controlled and primarily funded by Access Industries (uk) Ltd., a privately held conglomerate owned by billionaire Len Blavatnik.

Kagan estimates that DAZN finished 2020 with an estimated 7.6 million paid subscribers, down slightly from 7.8 million as of year-end 2019. The service had strong momentum heading into the year, but the pandemic wreaked havoc on the sporting world as most leagues and contests were paused in March and April 2020. While some sports would resume action in late summer/early fall, churn for most sports-focused streamers was likely sizable during the first half. 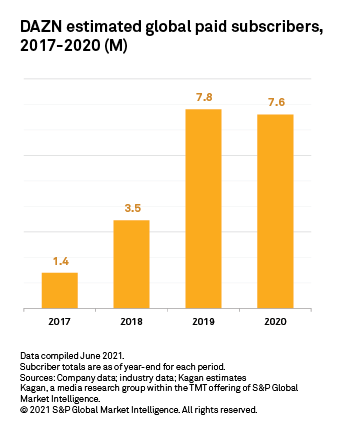 Gains during 2019 were primarily powered by debuts in Spain and Brazil during the year and launches in Italy and the U.S. in the second half of 2018. DAZN announced in December 2020 that it was expanding globally to more than 200 countries and territories, although subscriber growth from that initiative could be limited. DAZN's international offering in markets outside its traditional service areas is typically priced at £1.99 per month or less and primarily consists of live boxing matches and small niche sports, paired with archived content and original programming. 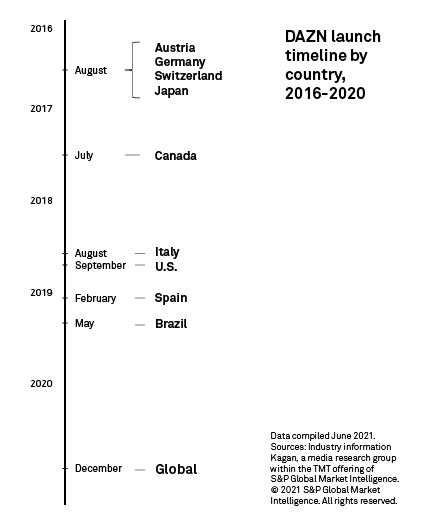 Financial data for 2020 has not yet been provided by DAZN Group, but reported financials through 2019 illustrate challenges faced by streaming sports services looking to aggregate popular, premium contests into a single service. Global demand clearly exists, but the high cost of sports rights that reached $1.65 billion in 2019 presents a soaring hurdle, especially in markets such as the U.S., where big broadcasters and media firms have locked up the most popular linear and streaming sports rights in long-term deals.

DAZN's revenues soared in 2019 for its core over-the-top offering across all regions, but its reported group loss across continuing operations ballooned as well and neared a $2 billion shortfall for the year. The company also saw growth in the year across its three primary business lines: over-the-top, media that comprise advertising and sponsorships, and ventures that primarily sub-licenses rights it holds. OTT revenues accounted for more than two-thirds of total group revenues. Revenues likely took a hit during 2020, but the company did launch several initiatives aimed at right-sizing operations, including exiting some rights deals and scaling back operations in Brazil and the U.S. in a bid to focus on core markets.

Initially launching in Germany, Austria and Switzerland in 2016, DAZN expanded to Italy and Spain between 2018 and 2019 and to the rest of the region in December 2020 as part of its global release.

The cost of a subscription varies by market depending on the available rights and the popularity of the service. In Italy, the monthly price will triple from €9.99 to €29.99 effective in July after the streamer acquired the exclusive rights to Serie A soccer. There is a promotional offer for current customers to commit to an annual contract at a monthly rate of €19.99. Both Germany and Austria share the same price structure with €14.99 for a monthly and €149.99 for a yearly subscription. In Switzerland, residents pay CHF12.9 per month or CHF129 for the full year. Spain has already seen a doubling in pricing since its launch two years ago. Currently, the monthly plan costs €9.99 with the annual at €99.99. Due to limited content, the service is priced at £1.99 a month in the U.K. and €1.99 a month in Ireland.

Since its inception, DAZN has pursued partnerships with various telcos, offering combined billing and in some cases bundled plans. This strategy has helped the streamer extend its reach to more households and benefit from marketing synergies. 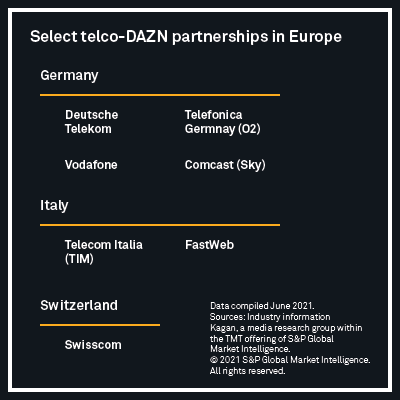 In the U.K. and Ireland, DAZN is capitalizing on international boxing rights in order to strengthen its brand name among fight sports fans and pursue more mainstream rights in the future. Following the $2 billion U.S. deal from three years ago, DAZN partnered in June 2021 with Matchroom Boxing for the rights to stream a minimum of 16 fights a year for the next five years. The deal does not include matches of the British heavyweight champion Anthony Joshua, who is signed to Sky exclusively for another year.

In 2019, DAZN partnered with Discovery Inc. to make Eurosport 1 HD and Eurosport 2 HD available to its subscribers in Germany, Austria, Italy and Spain. A year later, the agreement was extended for another five years and now includes Switzerland. The summer 2020 Olympic Games in Tokyo and the Beijing 2022 Winter Olympic Games will also be available to DAZN's subscribers.

In the DACH region — comprising Austria, Germany and Switzerland — DAZN established a strong following, having secured the rights to the German Bundesliga with 106 matches per season, Spanish La Liga, Serie A, Serie B, Ligue 1, MLS and the UFC. In Germany, DAZN signed an agreement with Comcast Corp.'s Sky for the distribution of two linear DAZN TV networks on Sky Q starting in the summer of 2021. The two channels have previously been available to Vodafone Group PLC's GigaTV subscribers since late 2020. According to Kagan estimates, DAZN had 1.45 million subscribers in Germany in 2019.

In Italy, DAZN disrupted the sports broadcast market by acquiring the rights to the local Serie A matches for the following three seasons beginning 2021/2022. The deal will cost DAZN €840 million per season, giving subscribers access to 10 games per week, of which seven will be exclusive to the platform with the rest bought by Sky for a total of €262.5 million. In June 2020, DAZN rejected an offer from Sky for €500 million to add the sports app to its Sky Q boxes maintaining the exclusivity with Telecom Italia SpA. As of now, TIM is the sole distributor of DAZN, with a reach of 6.43 million residential internet homes. The app is available on its TIMVision set-top boxes in three ways: stand-alone, bundled with the TIMVision basic pack, with the additional option to include Sky's Now TV. In 2019, DAZN had an estimated 1.43 million customers in Italy.

Japan was DAZN's only market in the Asia-Pacific region until the streamer's global expansion in late 2020.

In Japan, DAZN is charged at a monthly price of ¥1,750, excluding tax, on its own and partners' platforms. As the streamer has established its subscriber base in the market, it has cut some promotional offers, including the very successful NTT DOCOMO INC. deal of ¥980 per month, without tax. While docomo users who had subscribed to DAZN by September 2020 would continue to enjoy the discounted rate, new subscriptions would pay the list price. Other partners provide different promotions and trial periods, but most are only available to the premium tier customers, and none can be compared to the docomo deal. For example, KDDI Corp. offers their mobile customers of the unlimited 5G plan a three-month free trial and a minimal discount of 6% from the fourth month.

Partnership is key to DAZN's expansion strategy in Japan. The streamer offers direct carrier billing through the major mobile and multichannel operators. Access to DAZN is built into the multichannel operators' set-top boxes. Apart from the incumbent telcos, DAZN entered into a partnership with Japan Cable and Telecommunications Association, or JCTA, to launch on over 50 cable MSOs by end of 2020. 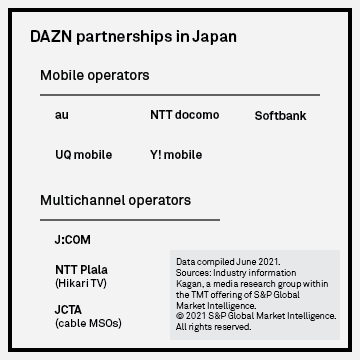 As the industry was hit hard in 2020 due to the outbreak of COVID-19, DAZN attempted to alleviate its heavy content costs. In August, the streamer announced extending their existing partnership with J.League for 2 more years, or 8 more seasons, until 2028, with the lengthened term based on a revenue-sharing model on top of a reduced license fee. Compared to a guaranteed license fee, the content provider would share the risks during bad times and growth during good times — a model that DAZN might continue to pursue going forward.

In November, the streamer launched an original program branded "Yabecchi Stadium," which provides J.League-related news and insights. Through a collaboration with Yamaha, subscribers can send cheers and applause to the stadium and interact with other users through a remote cheering application, named Remote Cheerer powered by SoundUD. The application has been applied to "Yabecchi Stadium" and enables audiences to interact with others in a chatroom.

In terms of licensed local competitions, DAZN added pre-season matches of the Nippon Professional Baseball, or NPB, league and the Asian Football Confederation, or AFC, Champions League in Japan in May 2020 and June 2021, respectively.

Pricing in Canada has remained unchanged since DAZN launched there in 2017, with the service available for C$20 per month or C$150 a year for an annual plan. A 30-day free trial is also available for users in Canada. DAZN initially launched in the U.S. at $9.99 per month but quickly raised its price to $19.99 per month in early 2019, when it also introduced a $99.99 a year subscription option. DAZN's offering in Brazil has seen several iterations, launching at 37.90 Brazilian reais in May 2019, then reducing that price by nearly half to 19.90 reais in December. In late 2020, the Brazilian operations were restructured, with the service still accessible but only through DAZN's international subscription offering.

Unlike in Europe and Japan where the company has actively partnered with telcos, DAZN has primarily gone it alone in the Americas. The service initially made waves with huge deals for exclusive boxing and combat sports rights in 2018-2019 but that momentum faded as Bellator MMA moved to Showtime and DAZN's much-hyped 11 fight, $365 million deal with Canelo Alvarez and Golden Boy Promotions fizzled out prematurely.

Competing with giants such as AT&T Inc., Amazon.com Inc., Comcast, The Walt Disney Co., Fox Corp. and ViacomCBS Inc. for popular domestic and international sports rights in the U.S. is a daunting proposition. This is especially challenging as general entertainment subscription video-on-demand offerings, including Amazon Prime Video, Peacock and Paramount+, look to differentiate their services with more streaming sports and Disney shifts an increasing amount of programming to ESPN+. The NFL alone generated over $100 billion in commitments for long-term pacts running through 2033 with Amazon, ABC, ESPN, NBC, FOX and CBS.

DAZN Canada has been the service's longest-running and most consistent offering in the Americas, offering subscribers access to top European soccer league action as well as NFL and MLB content. The service signed a five-year pact with the NFL in 2017 for the Canadian rights to NFL Sunday Ticket, NFL Game Pass and NFL RedZone. Additional international sports that DAZN has rights to stream in the country include boxing, tennis, basketball and rugby.

DAZN's offerings in Brazil and the U.S. have been pared back significantly in 2020-2021 as the company exited numerous rights deals during the pandemic. Subscribers in the U.S. have access to boxing via Matchroom Boxing and Golden Boy Promotions, while those in Brazil can stream soccer, boxing, basketball, motorsports and other niche events including snooker and bowling.