Next in Tech | Episode 82: Flexible Infrastructure

Request Information on 451 Research and the M&A Knowledgebase

Semiconductor activity contributed to a strong year for IoT dealmaking in 2020, followed by a flurry of consolidation in the healthcare, transportation, manufacturing and wireless sectors. According to 451 Research's M&A KnowledgeBase, the total value of IoT acquisitions rose to nearly $69bn from $8bn in 2019. Transaction volume was down slightly to 125 prints from the 2019 record of 139 purchases. Even backing out the $33.5bn NVIDIA-Arm pairing, total deal value was over four times the prior year.

M&A activity was concentrated in a small handful of verticals as businesses sought to digitize. Spurred by a global health crisis, healthcare technology-related transactions led in volume with 24 acquisitions totaling over $19bn, or 20% of all deals in the year. There was continued enthusiasm for the transportation sector, with 13 transactions in both commercial and consumer transportation totaling over $5.8bn, including four rather large LiDAR special-purpose acquisition company (SPAC) deals.

This transportation number does not include the acquisition in December of Uber's Advanced Technology Group by Aurora Innovation for a reported $4bn and is also not reflected in the $66bn in total IoT transactions. Healthcare and transportation were followed by manufacturing and industrial (13 prints, $5bn) and wireless-related firms (sensors and infrastructure), with 13 deals totaling $41m. 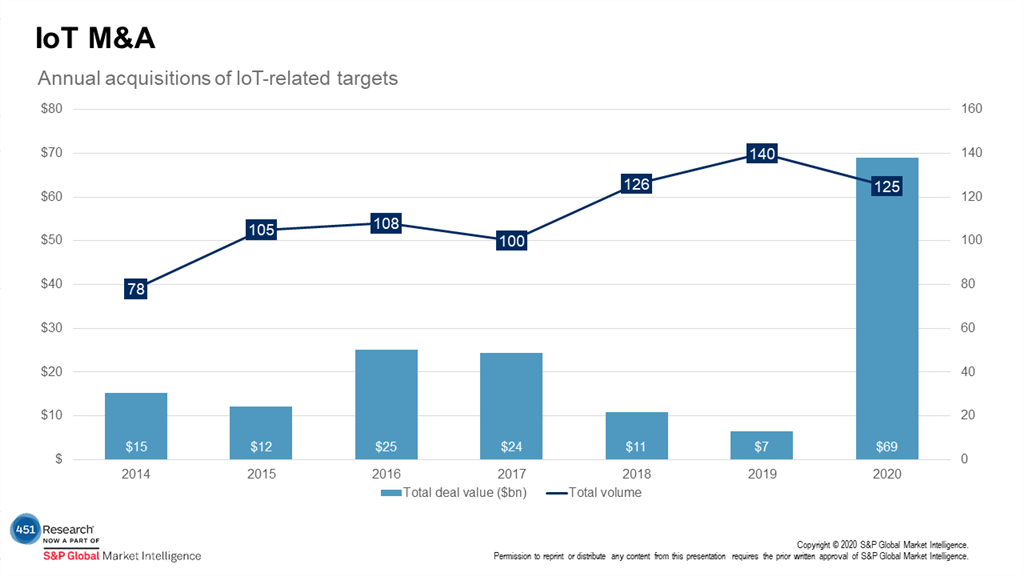 The signature transaction of the year was NVIDIA's $33.5bn cash-and-stock purchase (pending approval) of Arm from SoftBank. As AI capabilities stretch out to the edge, NVIDIA is betting that 'trillions' of AI-enabled devices will result in an Internet of Things many times larger than today's IoT market. The target's architecture is already well positioned to gain this business, and NVIDIA says it plans to both turbocharge Arm's current R&D efforts in the segment and offer its own AI software IP portfolio for embedding into the edge, potentially spanning from the cloud through to smartphones, self-driving cars, robotics and edge IoT.

Telemedicine firm Teladoc bought diabetes management specialist Livongo Health for $18.5bn in August. The seller offers home blood glucose monitoring devices and supporting services for diabetes. While only 6% of respondents to 451 Research's Voice of the Connected User Landscape (VoCUL): Endpoints & IoT, Consumer Representative, Q4 2020 survey indicated that they have a dedicated health monitoring device, more than one-third of those respondents use the device for blood glucose monitoring. As hospitals' insurance reimbursements model shifts from procedures to outcomes, there is greater incentive to remotely monitor patients with chronic conditions as part of a broader virtual care engagement.

By reaching for OSIsoft, the enlarged AVEVA is anticipated to have a combined annual revenue of over $1.5bn. Both companies have a solid foothold in heavy industries and their product portfolios are complementary. The combination of OSIsoft's PI Systems with AVEVA's 3D Plant Design and AI/ML proposition should advance the development of digital twins to further optimize asset performance and preventive maintenance. Their combined strength will form one of the largest open standard-based industrial platforms in a market still dominated by proprietary systems.

Luminar is a developer of LiDAR technology that is deployed in advanced driver-assistance systems (ADAS) and eventually self-driving cars and trucks. The vendor went public via an acquisition by Gores Metropoulos, a SPAC, in December, shortly after announcing a series of partnerships with Intel's Mobileye for robotaxis and Volvo, followed by a subsequent investment from Daimler. LiDAR is one of the many sensing technologies used in ADAS/autonomy, alongside cameras, sonar/ultrasonics and radar. Luminar also has its own perception software stack that interprets inputs from LiDAR to pass on to the path-planning stage of ADAS/autonomy.

The second of four LiDAR SPACs was Graf's acquisition of Velodyne Lidar in July. The deal provided a $150m investment to the target, although the cap table continues to be dominated by the founder, Baidu, automotive parts supplier Hyundai Mobis, Ford, and Nikon. Velodyne was the initial LiDAR firm in the automotive segment, having been used in the original DARPA autonomous driving challenges. The challenges to the industry, and especially to incumbents like Velodyne, have been the dual developments of solid-state LiDAR (in contrast to earlier LiDAR that used a spinning mechanical mirror to obtain a 360-degree view of the surrounding environment) and frequency modulated LiDAR (in contrast to amplitude modulated LiDAR), which is less susceptible to interference and has higher fidelity than its AM counterpart. Velodyne has announced offerings for the first challenge, but not yet the second.

Aurora is a self-driving technology provider that has forged partnerships with a few smaller automakers, and is effectively pre-revenue. However, it managed to acquire Uber's Advanced Technology Group (ATG), which housed its self-driving efforts. The companies estimate that the combined entity will have a valuation of more than $10bn. Although originally founded to develop technology for fully autonomous vehicles, Aurora has prioritized its go-to-market efforts to focus first on long-haul trucking applications, followed by last-mile delivery, then robotaxis. The transaction provides Uber ATG with $400m in additional working capital (it had closed a $530m series B in early 2019, led by Sequoia and Amazon). It also adds strategic investors Toyota, SoftBank and DENSO (a leading automotive parts supplier) to Uber (a ready-made robotaxi customer).

Healthcare: Put down the smart watch, we have a whole new wearable

Perhaps not surprisingly during a global pandemic, healthcare technology-related transactions led the field for number of prints at 24. Much of the activity was concentrated in remote device data collection and management, as a reflection of the changed insurance reimbursements model in the US that shifted the posture of the care community from in-facility care to remote monitoring and telemedicine. Connected devices at patients' homes, or worn by patients post-surgery or to monitor ongoing health issues such as diabetes, are increasingly prevalent, with 6% of respondents to 451 Research's (VoCUL): Endpoints & IoT, Consumer Representative, Q4 2020 survey stating that they have stand-alone dedicated health monitoring devices that are separate and distinct from health and fitness features on smart watches and fitness trackers.

These devices are most often employed for blood pressure monitoring, vital signs (respiration, temperature), blood glucose monitoring, and electrocardiogram, among other features. Manufacturers include Omron, Philips and Care Touch. In our VoCUL survey, 11% of respondents had been provided with a portable medical device by a healthcare professional to monitor disease, post-surgical monitoring, chronic pain management, or non-surgical rehabilitation. These medical wearables were already growing in popularity – and the data exhaust from them was highlighting scaling issues in collection and monitoring – before the outbreak.

With many suppliers opting for telemedicine and virtual visits, the growth of wearable medical devices – along with simplifying the sharing and security of the data generated from them – will be a lucrative submarket for many years to come. The transactions in this space last year align with this trend, with the signature Teladoc-Livongo combination at the top, followed by Teladoc-InTouch Health in January for $600m and Masimo's pickup of NantHealth's connected care assets for $47.3m, also in January.

The two dominant trends in transportation technology M&A in 2020 surrounded the ongoing march of ADAS in consumer and commercial vehicles toward ever-increasing autonomy, and the evergreen quest for more efficiency in trucking and maritime by the deployment of tracking and fleet management. LiDAR sensor technology led the pack with four SPACs, first with LiDAR pioneer Velodyne Lidar in July, then AVEVA in November, and finally Luminar and Innoviz in December. The autonomy segment also saw LeddarTech's purchase of perception software specialist Vayavision and Lacroix Group 's reach for eSoftThings, which offers a hardware and software stack for autonomy.

Telematics and fleet management is a sector that has a long history of innovation – and M&A – to squeeze out every last cost component in a margin-thin industry. While we anticipate consolidation activity in the trucking autonomy space to begin in 2021 and hit its stride in 2022, the humdrum business of locating and routing semi-trucks is more relevant than ever in the age of vaccines and the cold chain. Telenav, a provider of location-based services for the trucking and connected car industry, went private via a transaction with V99 in November for $241m; AddSecure purchased Connexas Group, a maker of IoT-enabled fleet management systems including cameras to monitor workers and vehicles for compliance, in May; and Omnitracs bought video-based telematics firm SmartDrive Systems in September.

Holding their breath for 5G and NB-IoT

There were several noteworthy wireless technology deals last year, both on the wireless geolocation front as well as related to 'tags,' or sensors for data collection in the field. While u-blox snagged Thingstream in April and consolidation in the low-power, WAN segment occurred throughout the year, the industry is largely holding its breath for volume 5G rollouts that began in earnest at the end of 2020. 5G addresses many of the throughput, latency and scalability/segmentation issues of 4G/LTE, needed for large-scale IoT deployments, and the addition of a licensed-band low-bandwidth alternative (NB-IoT) will enable a new breed of applications, initially targeted at asset tracking and monitoring.

Solution delivery in an ever-complexifying world

With the maturing of the IoT vertical, enterprises are deploying larger and more integrated projects. These projects now include components from multiple manufacturers across domains ranging from operational technology to infosec to data management and AI. While vendors' professional service efforts remain an indispensable part of every deployment, a cadre of other organizations from field services to global SIs are also playing key roles in delivering entire solutions, instead of a 'build it yourself' collection of components. This proliferation of partners brings a new set of coordination challenges, which we anticipate will give rise to a new generation of project coordination software and services to facilitate general contractors' delivery of outcomes.

The wealth of data generated by the many emerging IoT devices is creating a new breed of challenges in data management, and quickly exceeding traditional IT-gatekeeper models of data analytics. This is driving investment in DataOps, a DevOps-inspired approach to data management and visualization that pushes dashboards out to the edge where line and field personnel have just-in-time access to local and aggregated data. The counterpart to this access to data is the democratization of development of applications, which is being realized by low-code/no-code development tools (also called rapid application deployment tools) that enable non-developers to create their own apps for operational tasks with the newly available data.

LG Chem's battery division: In somewhat of a foregone conclusion, LG Chem won shareholder approval to carve out its electric vehicle battery division in October 2020. The South Korea-based chemical vendor has stated that it plans to list the newly separated battery division in the near future. LG Chem and its battery group have been in the business of providing batteries and associated technology to automakers since 2008, when it won the contract to supply batteries for the GM Volt. It currently partners with Ford, Geely, GM, Nissan, Volkswagen, Hyundai and Tesla, among others. LG Chem also recently announced a $2.8bn investment to build and expand its production facility in Shanghai near Tesla's production operations there, although Tesla has announced that it will also be pursuing its own battery manufacturing.

AEye: One remaining privately held LiDAR specialist is a notable exception to the SPAC mania in 2020. Pleasanton, California-based AEye combines cameras and 1,550nm LiDAR to achieve in a single device sensor-fusion, similar to what OEMs are seeking to accomplish with multiple LiDAR and cameras paired with a CPU/GPU. A SPAC is the most likely path to the public markets for a firm that has received strategic investment from automotive tier one suppliers Aisin and Continental, and is scheduled to first appear in production vehicles in 2024.

Request Information on 451 Research and the M&A Knowledgebase