The Essential Podcast, Episode 59: Elements of the Energy Transition #3 — Gadolinium

The Essential Podcast, Episode 58: A Mutual Failure of Understanding — Financial Cold War Between China and the United States

In 1973, Princeton professor Burton Malkiel wrote the book, A Random Walk Down Wall Street, laying out a case against the mutual funds of the time as persistently underperforming market indices. Malkiel recommended[i] that the New York Stock Exchange create a fund that simply bought and held stock in the companies comprising the indices. Somewhat quaintly, he also suggested that the NYSE run the fund on a non-profit basis.[ii]

The 1976 initial offering for the first equity index mutual fund (tracking the S&P 500®) raised USD 11 million. Boosted by the proliferation of defined contribution retirement programs (401[k] plans in the U.S. arose from the Revenue Act of 1978) and turbocharged by ETFs starting in 1993 (again, first tracking the S&P 500), by 2019, USD 4.6 trillion was directly indexed to the S&P 500, with USD 6.4 trillion tracking all S&P DJI indices. S&P DJI estimates the cumulative savings from indexing versus active equity fund fees at USD 320 billion over 1996-2019, just for the S&P DJI benchmark indices. 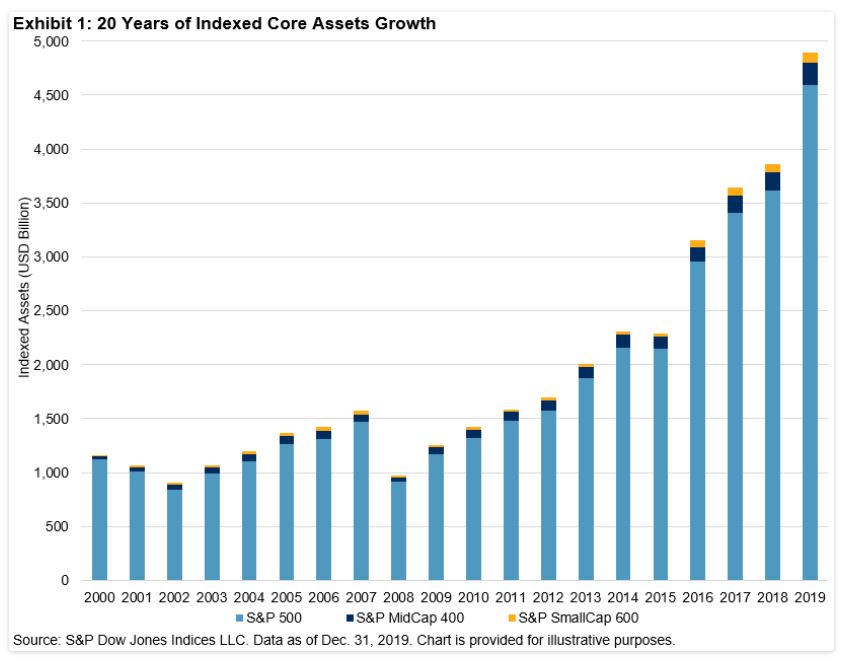 While S&P DJI’s SPIVA series regularly looks in more depth around the world and by fund style, perhaps now is a good time to review the longer-term trends and continued value behind indexing. Over the past 20 years (May 2000-April 2020), an investor in an active fund had a roughly 90% chance of being outperformed by the corresponding S&P DJI benchmark. If the underperformance wasn’t punishment enough, nearly two-thirds of funds were merged or liquidated in that time, while one-quarter of funds drifted away from their initial style. Furthermore, SPIVA Persistence reports have consistently shown that even the top funds of one measurement period are unlikely to retain their ranking in the next.

However, the story is more than a binary sieve of funds underperforming or surviving. Exhibits 3 and 4 show the superior returns of indices, benefiting from better stock picking (or, more accurately, no stock picking) and not having the fee drag. Reinforcing Einstein’s claim of compound interest as the Eighth Wonder of the World, a “satisfied-with-just-average investor” earned between 0.8% and 2.8% more in annualized terms, resulting in an impressive 42%-184% cumulative benefit over 20 years. 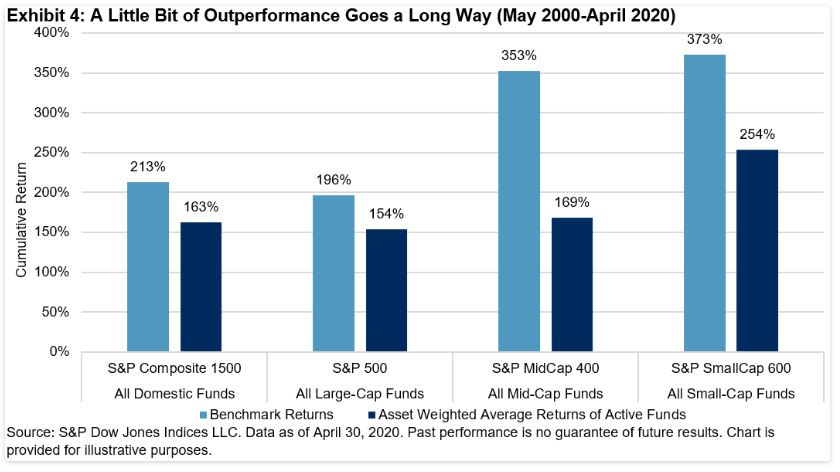 Malkiel’s seminal work helped launched a revolution in investments and personal finance, arguably putting the book in the same league as The Wealth of Nations (Adam Smith, 1776) and Das Kapital (Karl Marx, 1867) for its influence on asset accumulation. Malkiel’s vision of a low-cost fund for the masses has finally come to fruition: capitalism and technology have guillotined costs, with most U.S. brokerages now charging zero commissions and numerous index funds’ annual fees measured in low-single-digit basis points. 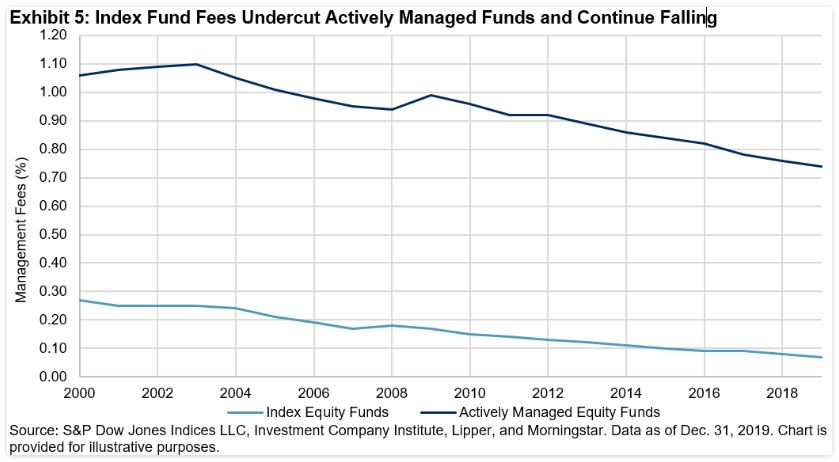 [i] Malkiel was neither the first nor the only person with this observation and recommendation, but his book was more widely read than previous academic publications, especially among non-professional investors.

[ii] In fairness, the NYSE was nominally structured as a non-profit exchange until its 2006 IPO.