A Eurozone in Transition

While Europe is the region hit hardest by the Russia-Ukraine conflict, its economy could be resilient to the shocks in the long-term.

S&P Global Economics now expects Eurozone growth to fall by 1.2% this year, relative to its previous baseline, driven by its exposure to Russia and expensive energy imports. Dependent on Russia for 45% of its natural gas and 30% of its oil supplies, Europe has been scrambling to ensure its energy security amid roaring energy and commodities prices—by seeking new trade partners and promising to meaningfully reduce its reliance on Russia by year-end.  In the short term, these changes could lead to even higher gas and power prices.

But despite the devastation of the current conflict, the overall macroeconomic outlook for Europe doesn’t appear to be entirely negative.

“There are good reasons to believe that current scenarios surrounding the Russia-Ukraine conflict are manageable for the European economy, taking into consideration the usual transmission channels—trade, commodity prices, and confidence,” S&P Global Ratings Chief EMEA Economist Sylvain Broyer said in research published March 16. “Russia was only the fifth destination of EU exports in 2021, accounting for no more than 4% for total goods exports. Higher energy and commodity prices can be cushioned, at least temporarily, by the large excess savings that households and corporates have accumulated during the pandemic—in many countries, fiscal policy is working to mitigate their impact. And even if confidence takes a severe knock from the conflict, it will be from a high level due to the quick recovery in the labor market as well as fading, but ongoing, fiscal and monetary stimulus.”

S&P Global Ratings believes that Europe’s energy market could be reshaped by the current situation, in combination with evolving regulation on the gas and energy sector, the EU's steps to secure alternative gas supplies or fuels, and efforts to redirect liquefied natural gas cargos.

Today is Tuesday, March 22, 2022, and here is today’s essential intelligence. 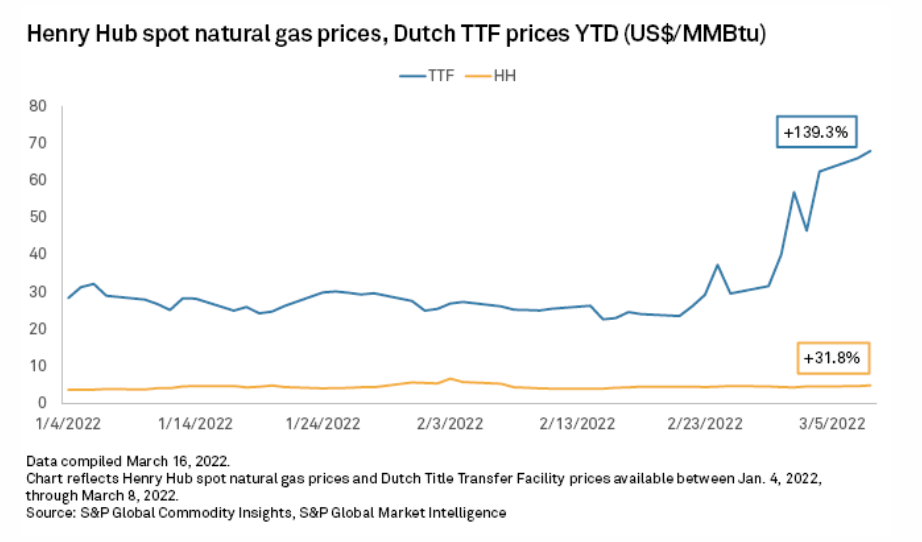 An energy price spike triggered by Russia's invasion of Ukraine has laid bare supply chain vulnerabilities that could curb global growth in the near term. Flows of Russian oil, natural gas, and coal have been disrupted, driving up prices for available energy commodities. Russian metals and mining companies have continued to make shipments and avoid sanctions despite broad global opposition to their government's war on Ukraine, but higher energy costs have battered Europe's aluminum, nickel, and steel sectors, as well as South Africa's platinum miners. Russia's invasion came as prices for many metals were already increasing due to supply tightness for commodities such as aluminum, nickel, and coal. 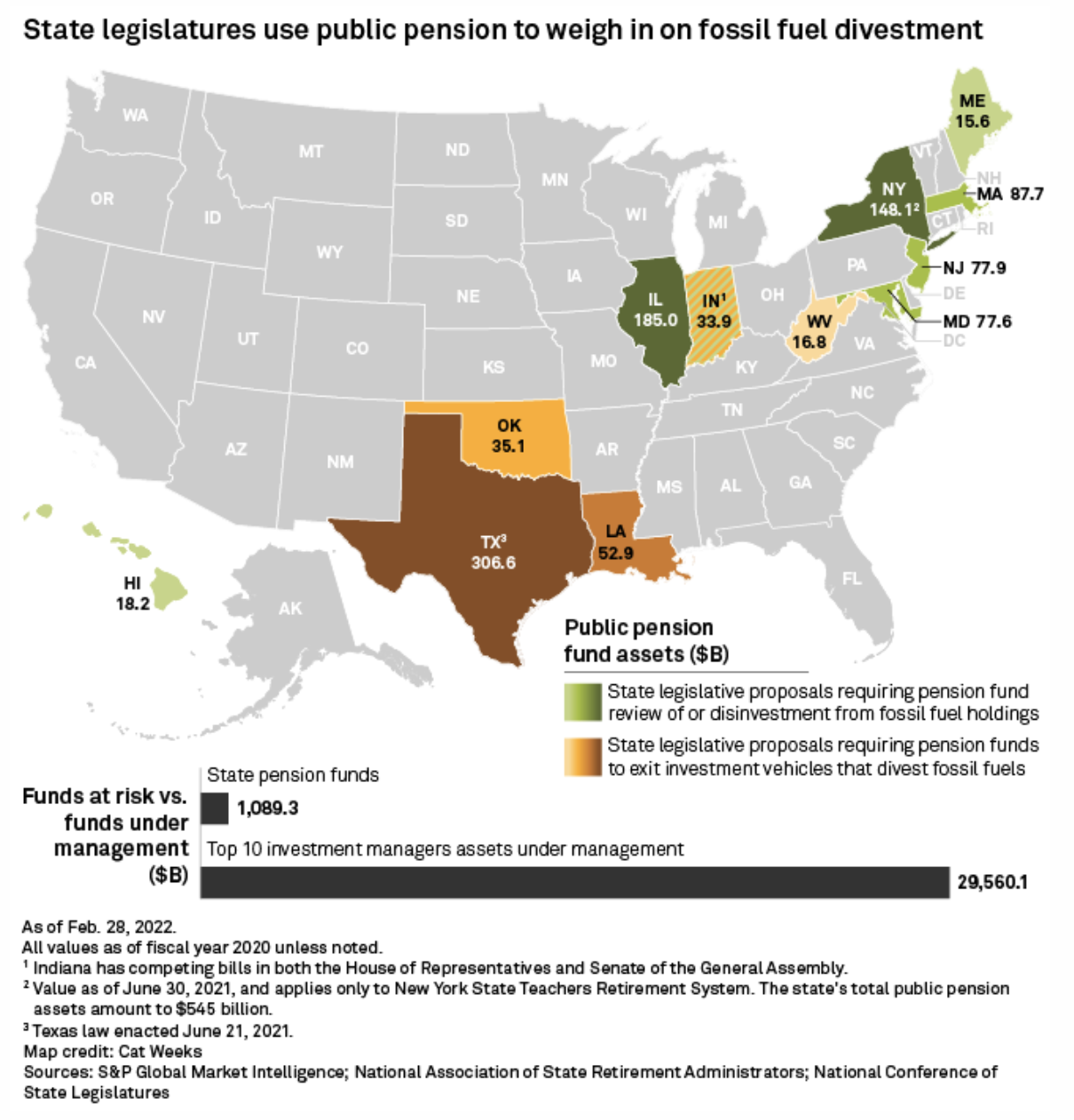 Pension fund managers are walking a fine line as the energy transition evolves, balancing demands to limit investment in fossil fuels against those of oil-producing states that have threatened to take their business elsewhere if such a boycott happens. Eight states are considering laws that would require managers of public employee pension funds to drop fossil fuel companies from their portfolios in an effort to support the fight against climate change. Those states have a collective $644 billion under management. At the same time, five states with $445 billion in pension fund assets either have or are considering laws that would take away fund management—and the fees that go with it—from investment managers such as BlackRock Inc. and JPMorgan Chase & Co. if the fund managers screen potential investments based on their environmental records. 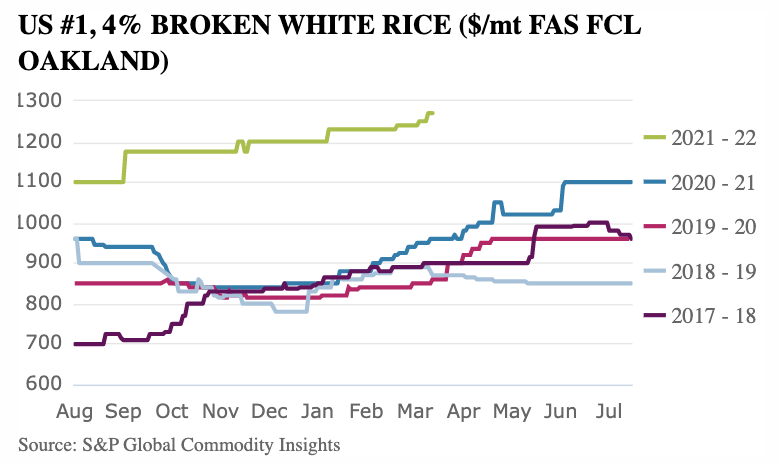 Sources in the California rice market are reacting with increasing concern to the prospect of a historically small crop this year, on the back of an already disappointing 2021 harvest. According to the U.S. Department of Agriculture's 2021 Acreage Report, planted area in California totaled 417,000 acres (168,754 hectares), down by 100,000 acres (40,469 hectares), or 19%, on year as water allocation restrictions curbed farmers' ability to plant. California's 2021-22 rainy season got off to a good start, with heavy rain and snow for periods of Q4 2021 and hopes of a return to a "normal" crop size rose. However, much of this precipitation was absorbed directly into the parched ground, rather than filtering down to reservoirs or topping up the snowpack all that much. 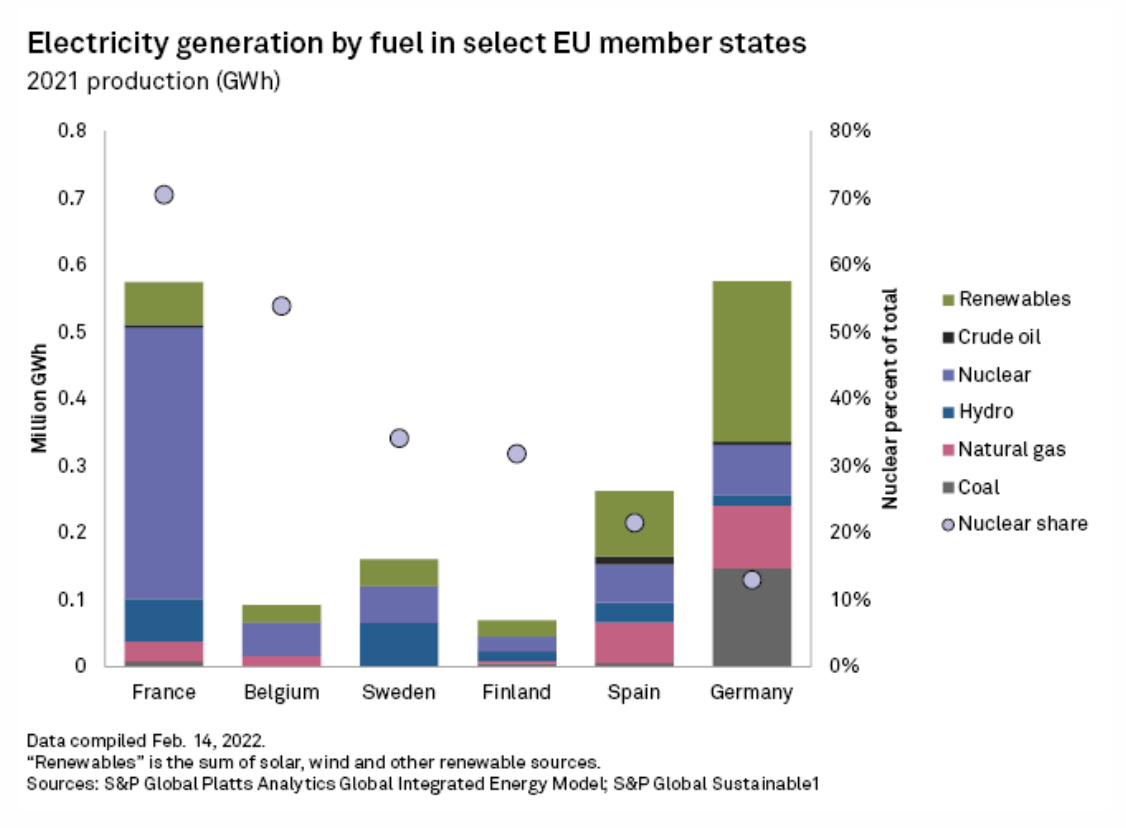 Regulation is shaping the sustainability agenda and changing the way companies do business in different jurisdictions but keeping pace with constant regulatory updates has become a mammoth task for businesses and investors. In this recurring series, S&P Global Sustainable1 presents key regulatory developments from around the world. In this month’s update, it looks at new guidance on EU taxonomy disclosures, a growing push toward regulating ESG ratings providers in Europe and India, a carbon emissions disclosure bill in California, and new ESG disclosure rules in China. 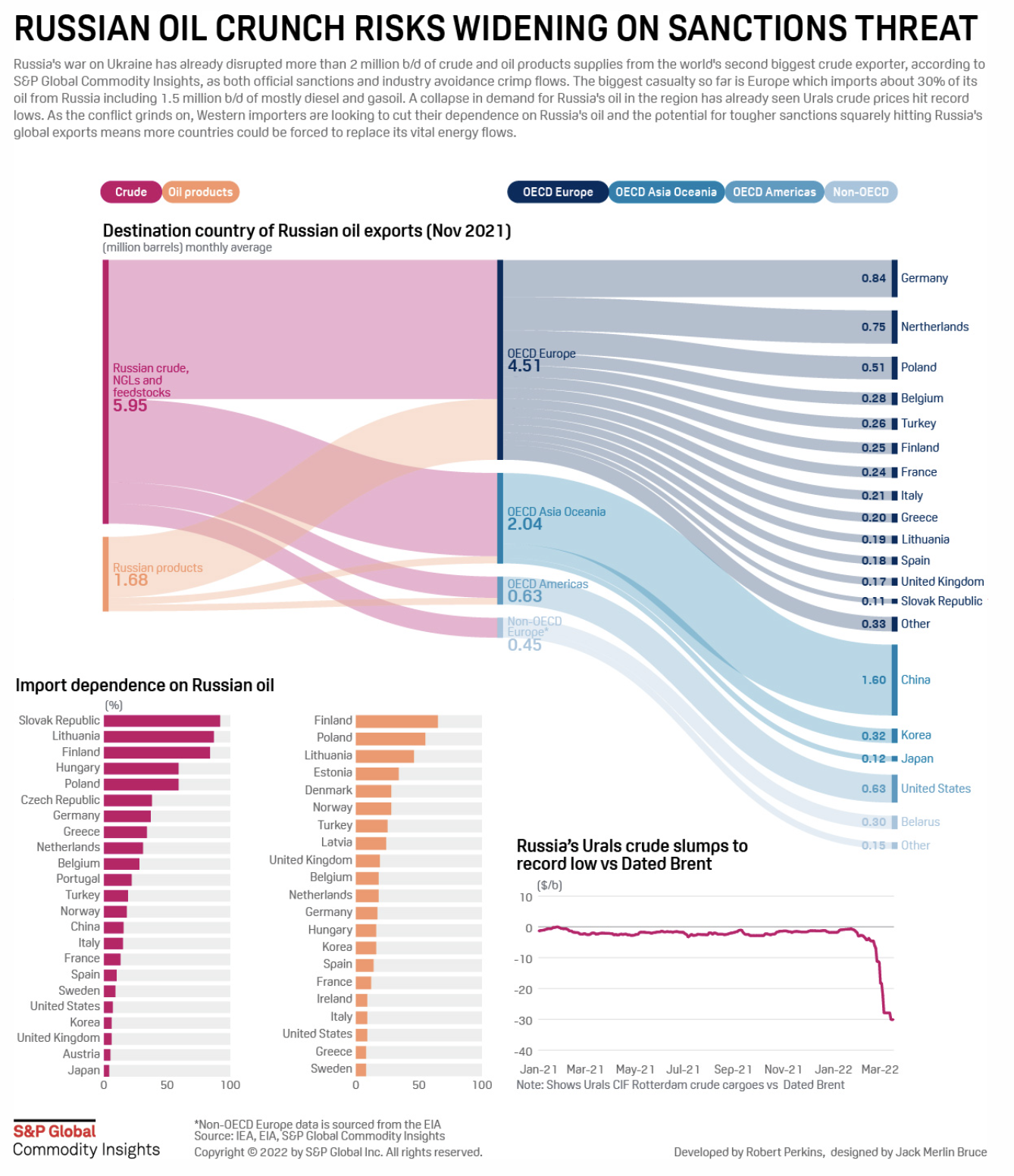 Ireland and Lithuania called for the EU to impose sanctions on Russia's oil trade at a meeting in Brussels on March 21 ahead of talks with U.S. President Joe Biden later in the week. The calls came during a meeting of EU foreign and defense ministers, prior to a meeting of EU heads of government and Biden on Thursday to discuss the response to Russia's invasion of Ukraine and what EU foreign affairs high representative Josep Borrell called "massive" war crimes by Russia. The EU has shied away from following U.S. and U.K. moves to boycott Russian oil, with EU energy sector sanctions focused on areas such as investment and technology sales, although Germany is moving to try and limit its use of Russian gas. 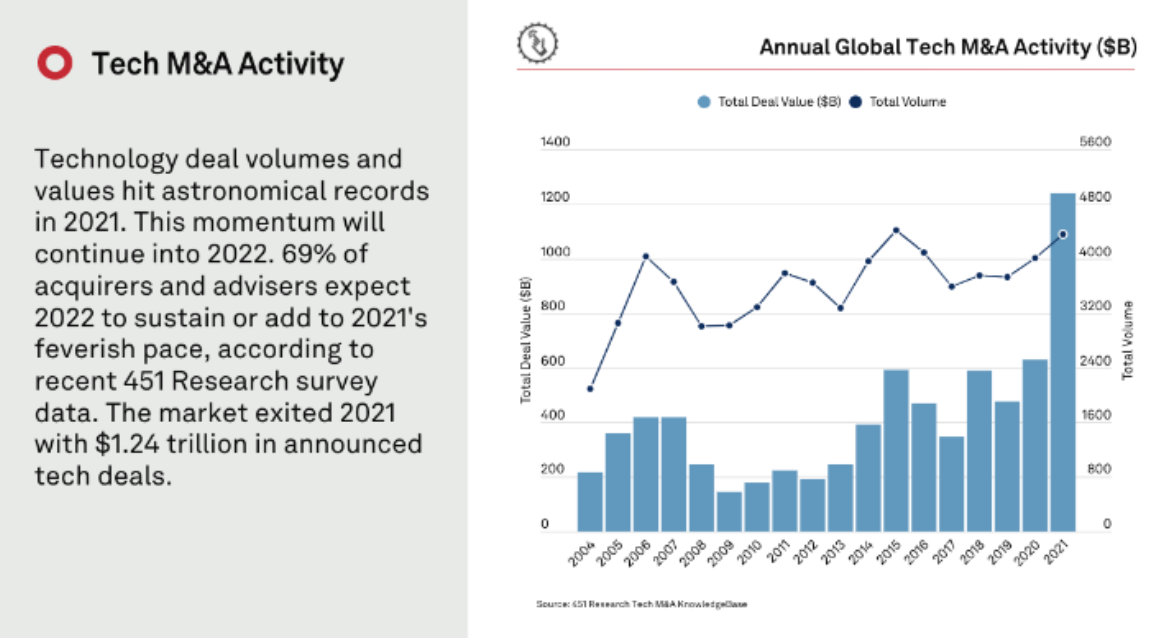 2021 was a huge year for S&P Global Market Intelligence. It introduced the S&P Capital IQ Pro platform with differentiated data, robust solutions, and flexible delivery options to help its clients accelerate their digital transformation while navigating through post-COVID uncertainty in the TMT sector. Today, S&P Global Market Intelligence is excited to announce that IHS Markit is now part of S&P Global. Look back and discover its next step in delivering data, technology, and expertise to the TMT sector.