Facing a potential existential crisis, the world's largest oil companies have recently felt the force of climate activism in boardrooms and courtrooms. As investor pressure escalates, oil majors may need to find solutions for their role in reaching net zero while maintaining net profits.

May was an eventful month for oil majors. Netherlands-based Royal Dutch Shell lost a court battle that will force the giant to accelerate its efforts to reduce carbon emissions. Exxon Mobil’s board saw the appointment of three climate-focused activist investors from hedge fund Engine No. 1. Chevron’s investors voted for the first time in favor of aggressive targets to cut emissions from its products. But was the upheaval a moment in time? Or does it mark the beginning of widespread support for actionable change?

The growing focus on environmental, social, and governance (ESG) risks and opportunities that forced changes across oil majors’ boards and institutional investor divestments could affect demand and pricing for oil and gas companies' new debt issuance, according to S&P Global Ratings. Better credit is available to oil companies that produce less carbon, according to S&P Global Ratings, which found in recent research that oil companies pay more for capital in the bond market when they release more emissions.

Nonetheless, these companies continue to have ample market access. In its most-likely scenario, S&P Global Platts Analytics anticipates that global oil demand will rebound in 2023 from pandemic-prompted lows and subsequently grow slowly through 2040. At the same time, oil and gas majors' traditional business models are likely to be increasingly challenged as renewables rise and the energy transition takes shape, according to S&P Global Platts’ alternative 2 Degree Outlook. The International Energy Agency warned, yielding much criticism from the oil industry, that all new upstream developments would need to be canceled, and spending would solely focus on existing fields in order to achieve net zero emissions by 2050.

“These events regarding climate change underscore what has become a global concern among sovereign nations and investors, and could serve as a wakeup call for an industry that is perceived by many to be slow to adjust to climate change and emission mandates,” S&P Global Ratings said in a report last month. “In our opinion, stricter regulations, substitution, and secular shifts in industry supply and demand fundamentals will contribute to a more difficult operating environment for fossil fuel producers and will likely augment the risk of stranded assets and significant asset writedowns.”

Oil majors’ next steps will likely shape how they will confront the difficult challenge of balancing sustainability in the environmental sense with sustainability regarding industry viability. As key players in the fight against global warming, no matter their size, oil companies’ net zero targets, current carbon intensity, new strategies, and overall operating conditions are under market participants’ close watch.

Today is Wednesday, July 7, 2021, and here is today’s essential intelligence.

The Global Sukuk Market Is Returning to Traditional Risks 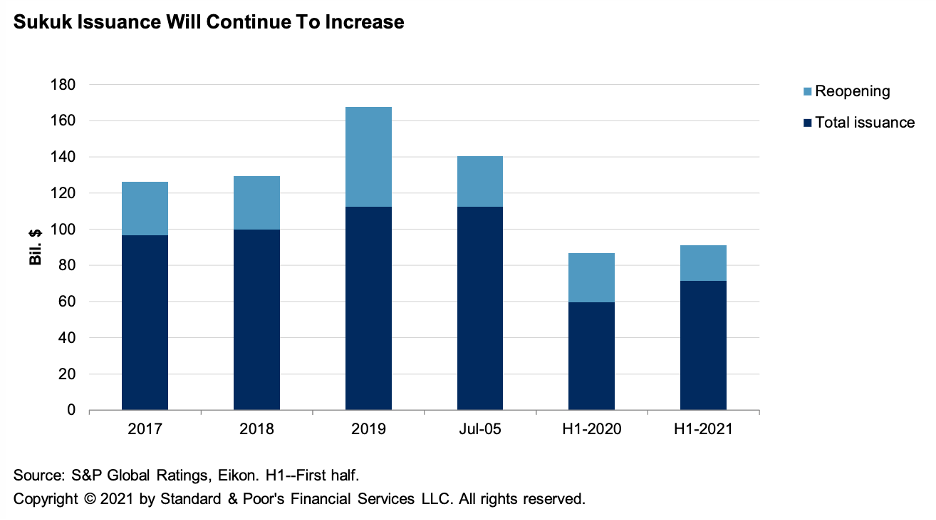 In first-half 2021, sukuk issuance volumes increased 5% (20% including primary issuances only) due to strong liquidity, low interest rates, and some issuers returning to the market.

Despite a rash of negative rating actions in 2020, there were no fallen angels (companies downgraded from investment grade to speculative grade) in the U.S. Chemicals sector. 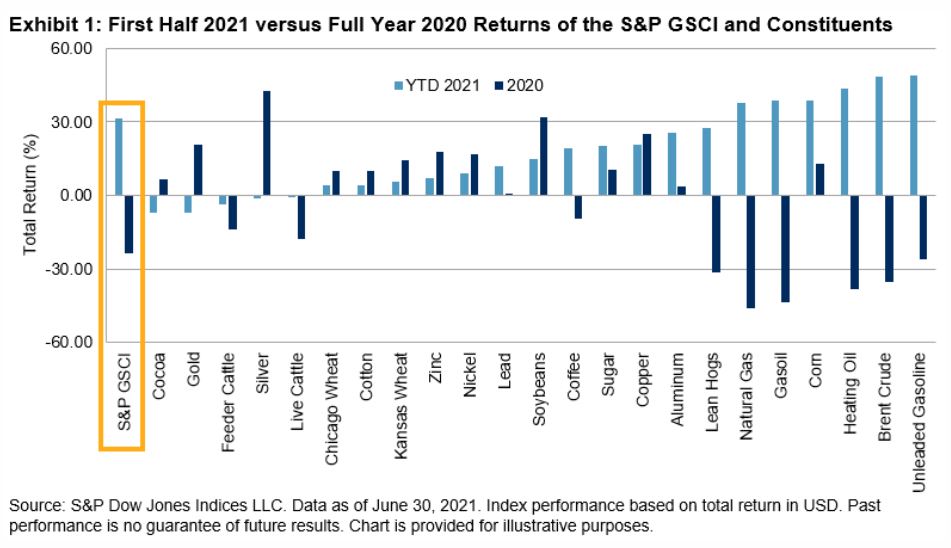 The S&P GSCI rose 31.4% in the first half of 2021, outperforming the S&P 500®, which rose 15.2%. The S&P GSCI has more than doubled since hitting an all-time low during the initial stages of the COVID-19 pandemic in April 2020. Several commodities have reached new all-time highs this year, as the global economy has reflated, consumer confidence hit pre-pandemic highs in many regions, and supply chains remained disrupted.

NYMEX WTI Surges to Over Six-Year High on OPEC+ Deadlock; ICE Brent Trades Near $78/B

NYMEX WTI crude futures jumped to a six-and-half-year high in European morning trade July 6, a day after OPEC+ talks were abruptly canceled due to rifts regarding the coalition's future production plans. The breakdown in OPEC+ talks mainly due to differences between Saudi Arabia and the UAE over production increase have spooked oil markets, raising concerns about tight near-term supply. 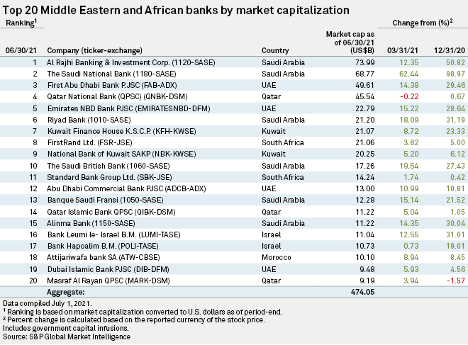 Saudi Arabia's Al Rajhi Banking & Investment Corp. topped the list of the 20 largest banks by market capitalization in the Middle East and Africa as of June 30, with a market cap of $73.99 billion, S&P Global Market Intelligence data shows.

Virtual banks in Hong Kong are eyeing expansion into wealth management business for the mass market, a move that analysts say could help turn their first profits. Like many online-only banks around the world, some of Hong Kong's eight licensed virtual banks are venturing into more lucrative businesses such as wealth management after building their customer base from scratch through lower-margin services such as deposit accounts, loans and money transfers. 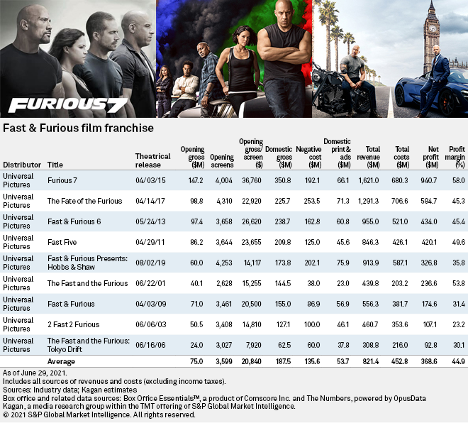 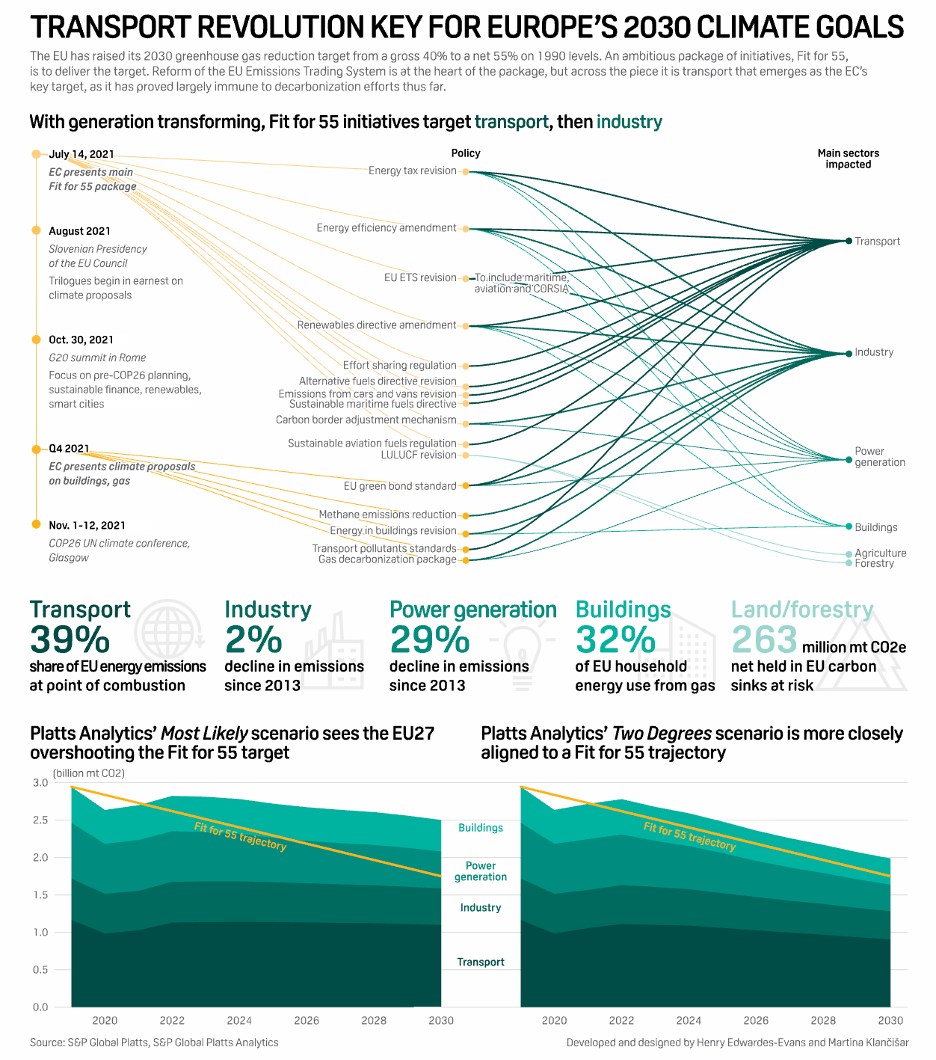 The European Commission is gearing up to target CO2 emissions from the transport sector as part of its plans to cut greenhouse gas output by 55% below 1990 levels by 2030. The EU's executive arm is set to unveil a standalone carbon market for the road transport sector that will target upstream fuel providers, according to draft documents leaked in late June.

India's path to meeting its ambitious target of 450 GW renewables capacity by 2030 is obstructed by a lack of systemic reforms and progress in the power sector -- factors that are key to unlocking further development of its clean energy sector.

The next generation of Asia's wealthiest families are leaning on sustainability to stamp their mark on their businesses and also to grow returns in the post-COVID-19 world. The next-gen, or the upcoming cohort that will inherit the wealth of the ultra-high net worth families, is one of the key drivers for for environmental, social, and governance issues in Asia, particularly in Greater China, said Amy Lo, co-head of global wealth management in Asia-Pacific and head and chief executive of UBS Hong Kong. 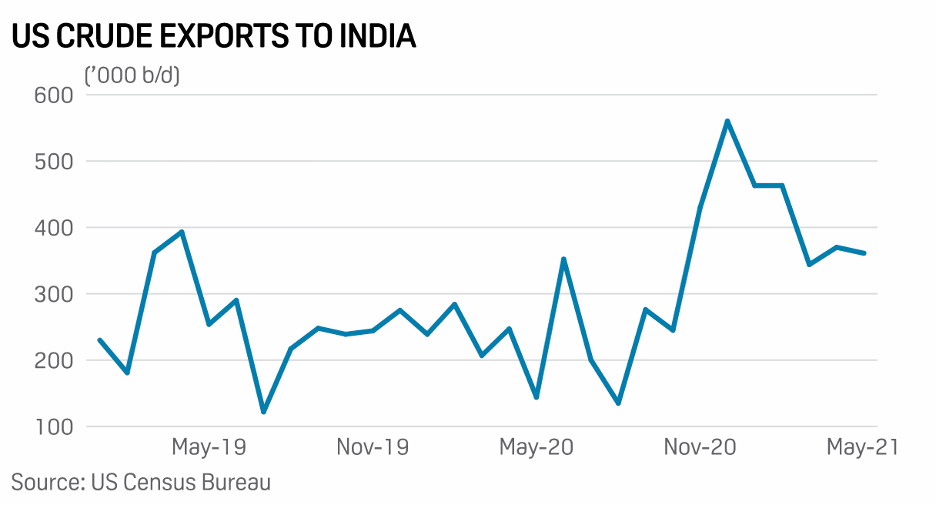 Indian refiners have been snapping up maiden import deals for newer crudes such as Guyana's Liza and Brazil's Tupi in a sign that one of Asia's fastest-growing oil consumers is increasingly looking to diversify its feedstock basket and have steady supply sources beyond the Middle East.

OPEC+ abruptly canceled its meeting July 5 with no new date set after Saudi Arabia and the UAE failed to agree on the terms of a deal that could see 400,000 b/d of extra production each month added to the market from August. The dispute centers around the UAE's demand for its baseline -- the level used to calculate its quota -- to reflect closer its 4 million b/d of capacity. S&P Global Platts Analytics is optimistic a resolution will be found.