The Federal Reserve’s monetary-policy announcement seems to have met the market’s consensus expectations. The outcomes of the central actions will indicate how the post-pandemic economic and credit recovery develops.

At the conclusion of its two-day Federal Open Market Committee (FOMC) on Jan. 26, the world’s most influential central bank left the target range for the federal funds rate unchanged near zero, continued its tapering to end bond purchases by early March, and signaled that it will raise benchmark interest rates starting at its next meeting that same month. S&P Global Economics anticipates the Fed will enact at least three rate hikes this year, starting in March, followed by as many as five addition hikes through 2024. Balance sheet normalization could solidify at some point next year.

“The Fed's interest rate rocket is heading to the launchpad and preparing for liftoff,” S&P Global Ratings’ Chief U.S. Economist Beth Ann Bovino said in a report released following the FOMC meeting. “But it's not just a question of liftoff in interest rates—it's now more of a question of how high the Fed wants to fly its monetary policy rocket and how fast. And our reading of the statement suggests that the Fed is aiming for the stars in this cycle of monetary tightening.”

The Fed made clear that current conditions—expansive growth, with economic output in the fourth quarter of 2021 advancing at the highest level in nearly 40 years, an annualized 6.9% rate; a strong labor market reaching the central bank’s maximum employment target, despite the spread of the omicron variant across the country disrupting some workforce conditions; and inflation at 7%, marking a four-decade high—have set the precedent for its most aggressive tightening since the 1990s.

“In light of the remarkable progress we’ve seen in the labor market and inflation that is well-above our 2% long-run goal, the economy no longer needs sustained high levels of monetary policy support,” Fed Chairman Jerome Powell said in a press conferencing following the FOMC meeting yesterday. “Inflation risks are still to the upside in the views of most FOMC participants, and certainly in my view as well. There’s a risk that the high inflation we are seeing will be prolonged. There’s a risk that it will move even higher. So, we don’t think that’s the base case, but … we have to be in a position with our monetary policy to address all of the plausible outcomes.”

Emerging market (EM) economies may face consequences from the Fed’s decisions. Although some previous tightening cycles from the U.S. central bank have been associated with turbulence in developing economies with high external financing needs or weak debt profiles, S&P Global Ratings anticipates that EMs are better-positioned to weather changing conditions than they were during previous cycles.

“Our baseline macroeconomic forecasts broadly anticipate orderly adjustments in interest rates across major emerging markets in response to the upcoming normalization of U.S. monetary policy. Domestic interest rates and exchange rates in EMs have been adjusting to the expected rise in rates over the last year—much of the action may already be behind us,” S&P Global Ratings’ Chief Emerging Markets Economist Satyam Panday and Lead Latin America Economist Elijah Oliveros-Rosen said in research yesterday. “The overall impact on each country will depend on many factors, including their policy response. Our analysis suggests that external imbalances will be the main channel of transmission of a faster-than-expected Fed tightening cycle for Argentina, Chile, Colombia, and Turkey, while fiscal imbalances will be the main channel for Brazil, India, and South Africa.”

Investors may look to remove risk from their portfolios despite a stormy start to 2022 that has brought forth capricious movements across markets. After the press conference, the broad-based S&P U.S. Treasury Inflation Protected Security Index declined 1%, benchmark U.S. two-year Treasury yields rose more than 13 basis points in the largest single-day swing since March 2020, the CBOE Volatility Index rose to 32, and the S&P 500 finished flat, according to S&P Dow Jones Indices.

“Some market participants may be staying on the sidelines and refrain from taking on more risk until there is greater clarity on the Fed policy outlook," Yeap Jun Rong, a market strategist at the foreign exchange firm IG, told S&P Global Platts about crude futures’ reactivity to the FOMC meeting outcome. "Guidance from the Fed regarding the path toward tightening will be key in driving market performance near-term.”

In the coming weeks and months, other banks around the world are set to raise their own rates. The Bank of Canada also announced yesterday that it is maintaining its rate at 0.25% but will soon begin raising the benchmark to fight inflation. In contrast with its Western counterparts, the People’s Bank of China indicated earlier this month that it may cut its interest rate to challenge slower loan growth, according to S&P Global Market Intelligence.

Today is Thursday, January 27, 2022, and here is today’s essential intelligence. 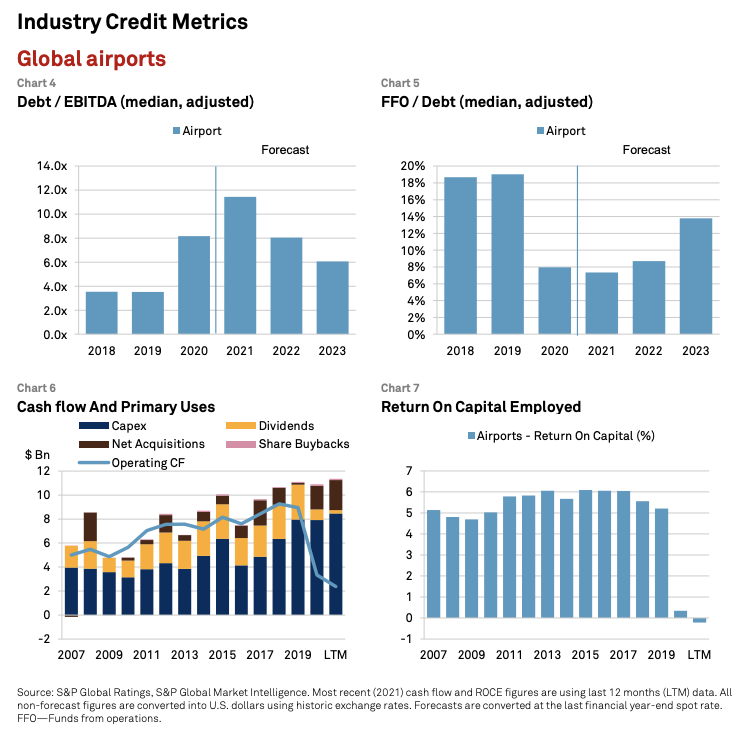 S&P Global Ratings’ Industry Top Trends series sets out our industry experts’ assumptions for 24 global industries in 2022. They consider what's changed, what are they key assumptions for 2022, and what are the key risks. Global Transportation Infrastructure is navigating new virus variants with the pace of recovery varying widely across different assets.

Insurtech companies set records in both fundraising and valuations in 2021. That may prove difficult to replicate, given the specter of rising interest rates and the struggles of publicly traded insurtechs. U.S.-based insurtechs raised about $3.58 billion from issuances of common equity, preferred securities, and senior debt in 2021, according to an S&P Global Market Intelligence analysis. Willis Towers Watson PLC estimated that insurtechs raised $10.5 billion during the first three quarters of 2021, while market scanning platform Sønr put total investments at $39.14 billion for that period. 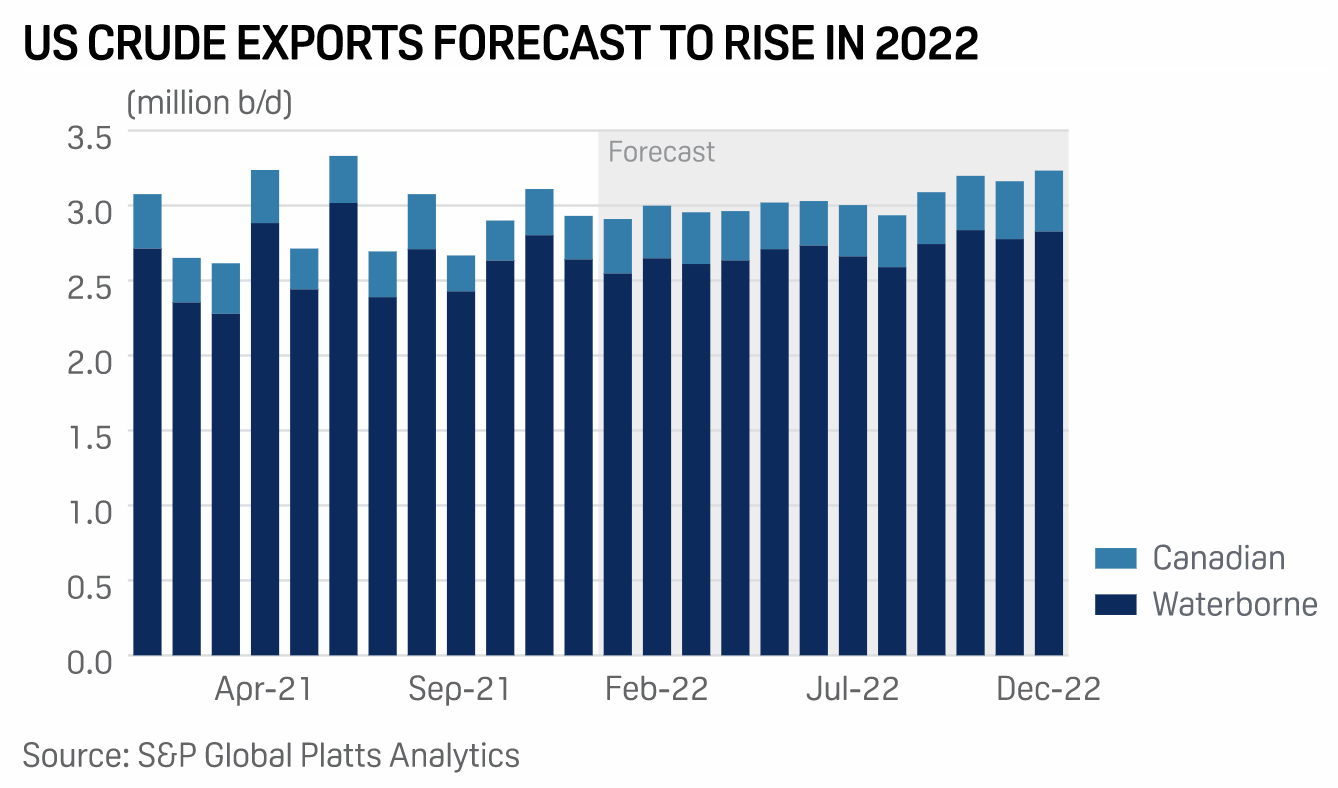 U.S. crude oil exports are expected to rise in 2022 and exceed an average of 3 million b/d as North American production rises amid a higher oil and gas pricing environment. However, U.S. exports will not spike as much as crude production volumes this year because domestic demand also is expected to increase with refineries still underutilized as the ongoing COVID-19 pandemic potentially switches to the endemic phase later this year, according to S&P Global Platts Analytics and Kpler projections. 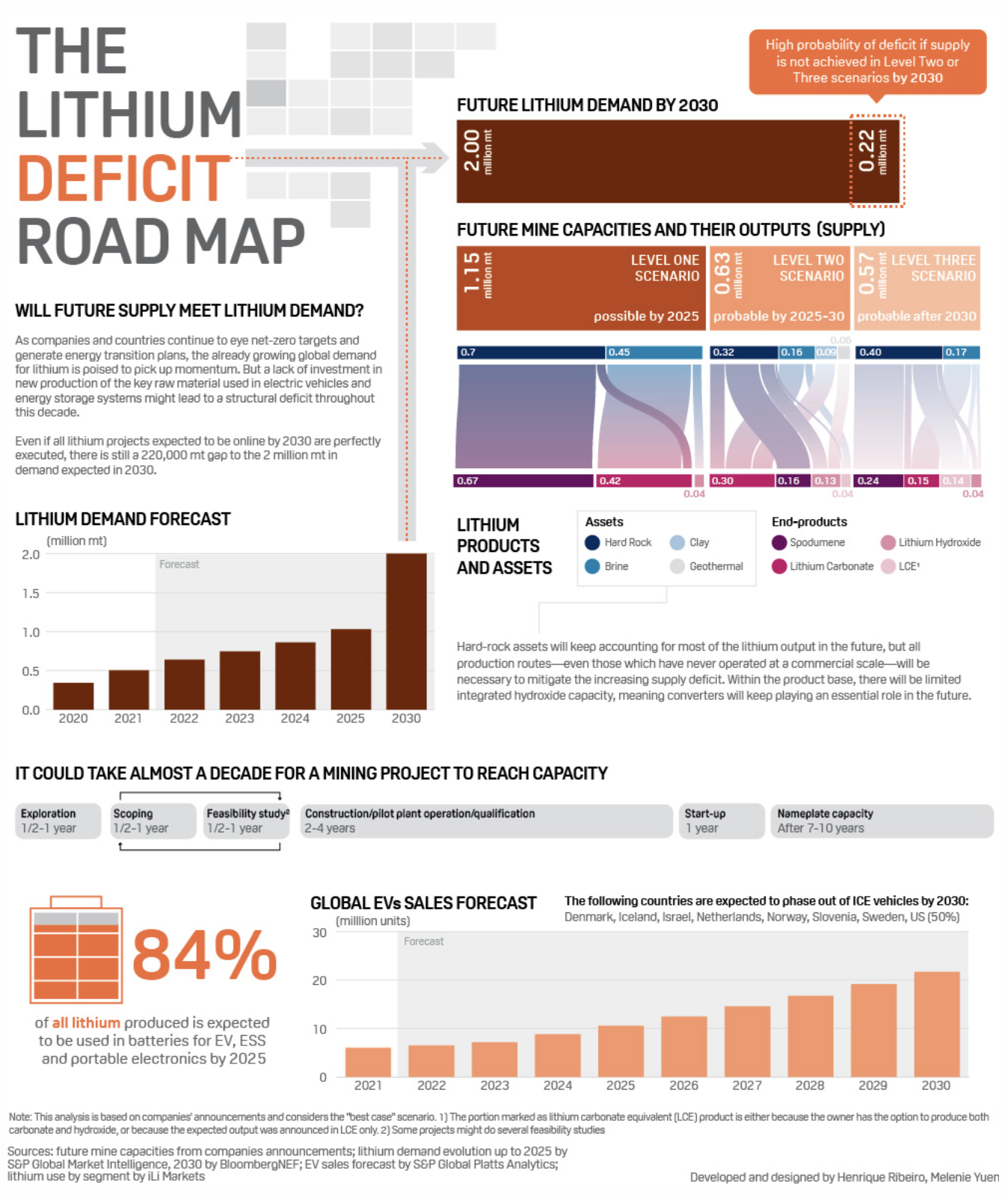 Lithium is a key raw material for electric vehicles and energy storage systems, but the lack of investment in new supply in previous years might generate a structural deficit throughout this decade, data from the expected supply versus expected demand (both until 2030) demonstrates. During the last lithium price bear run, from mid-2018 to mid-2020, investments shriveled from the specialty chemical. In early 2018, a lot of new spodumene ore capacity started running from previous investments in anticipation to an expected EV boom that didn't start until the second half of 2020; the oversupply crashed prices and halted investments. 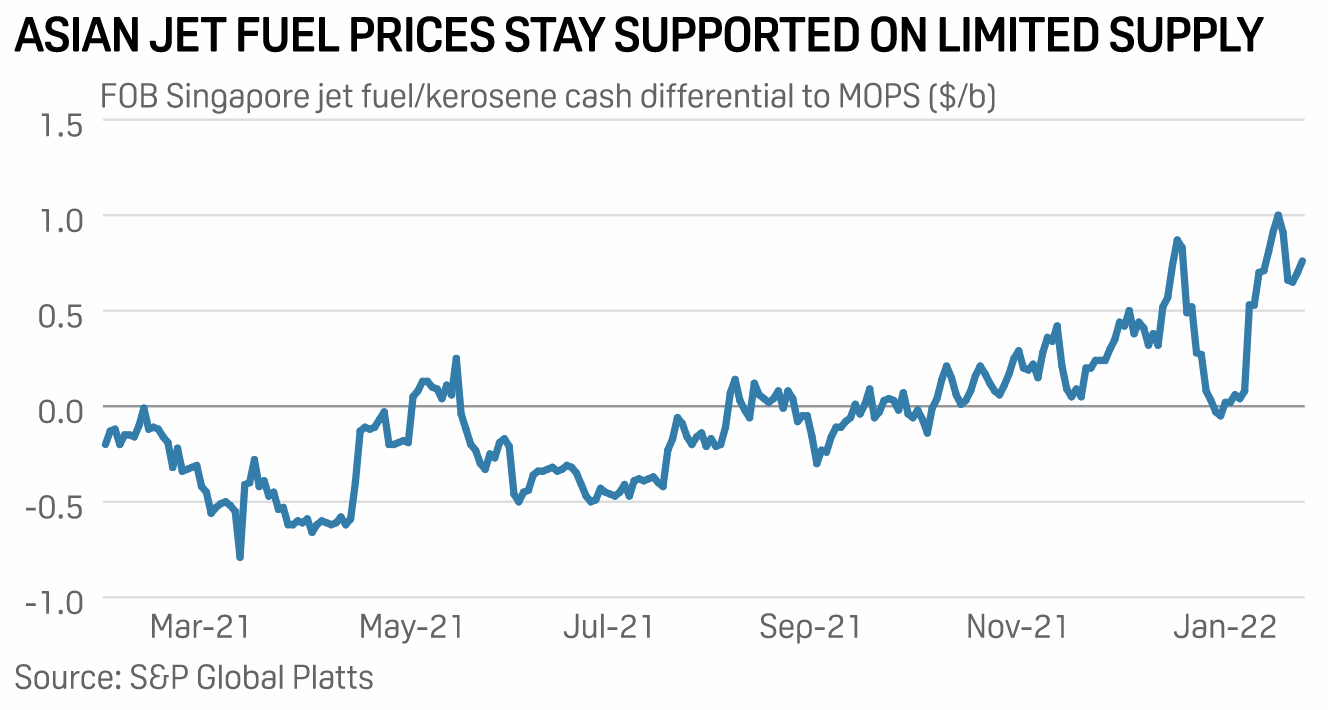 Surging omicron coronavirus cases in Asia-Pacific have weakened jet fuel demand recovery in the region over the near term, as some airlines are forced to reduce flight capacity due to stricter mobility restrictions. Asian countries have curbed movement in the fight against COVID-19, with sources saying that the absence of a strong domestic market for flight travel has curtailed demand recovery.

Big 4 Wireless Carriers Spent $100B On 5G Spectrum: Was It Worth It? 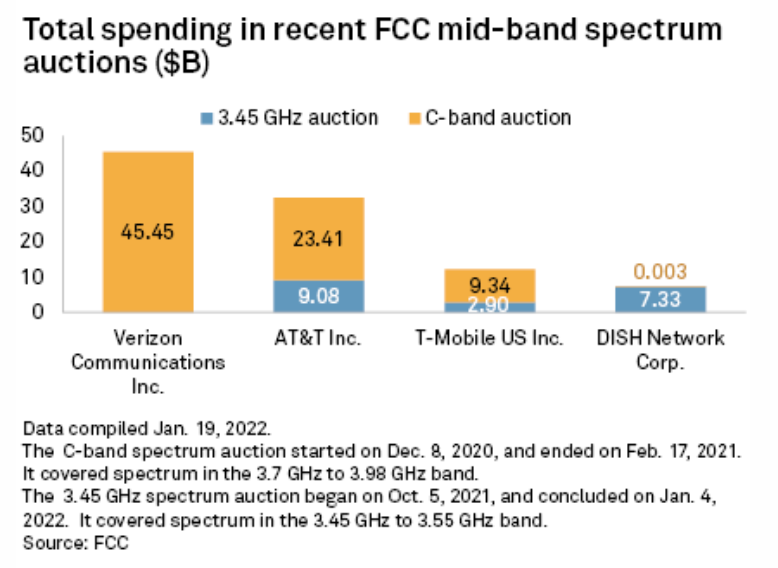 Mobile carriers spent tens of billions of dollars on 5G spectrum over the past two years, but those investments may take a while to pay off, analysts say. Looking at four of the biggest U.S. wireless companies—AT&T Inc., Verizon Communications Inc., T-Mobile US Inc., and DISH Network Corp.—the companies collectively spent nearly $100 billion in two near back-to-back mid-band spectrum auctions. Mid-band spectrum is considered essential for 5G delivery, balancing speed, and range. It provides broader coverage than high-band spectrum and faster speeds than low-band spectrum.