The Essential Podcast, Episode 71 Bretton Woods 2.0 – A New Model for a Changing World

Geopolitical uncertainty is plaguing energy markets across all regions. If talks between the U.S. and Iran to freeze the latter’s nuclear development and lift some U.S. sanctions falter or fall apart, some 700,000 barrels per day of oil capacity could be lost from the market. Libya’s political future and status as a stable oil producer hang in the balance due to delayed elections. Russia’s fractious relationships with Ukraine, the E.U., the U.S., and Middle Eastern economies are adding to uncertainty as Russia threatens military action toward its fellow former Soviet republic, has withheld energy supplies from its European counterparts, battled sanctions from Washington, and argued over oil production decision-making. Disruption from anti-government protests and political change in Kazakhstan have put the Central Asian economy’s credentials as a commodities powerhouse to the test.

Market participants are watching closely to see how the outcomes of these situations affect energy markets, even as the coronavirus pandemic continues to determine global activity.

“These issues probably wouldn't have had as much influence on oil markets in recent years, just because there was so much spare capacity, so there was a buffer for OPEC+ to fill any gaps. But that option will probably be reduced dramatically by the second half of this year," Mr. Sheldon said on the Capitol Crude podcast. “This all comes at a time that OPEC production cuts are going to lower spare capacity down, probably by the middle of the year, we’ll see spare capacity levels falling below the pre-pandemic levels of the first quarter of 2020 and probably down to levels that we haven't seen since the onset of the Arab Spring."

The lingering demand implications of the pandemic have added complexities to the oil market. Criticizing OPEC+’s decision to maintain supply increases as oil prices surge, global leaders’ perceptions of the bloc have soured in recent months and governments like those of U.S., Japan, and India have challenged the group’s choice to add supply by releasing oil from their own strategic petroleum reserves. OPEC’s new secretary-general, Kuwait's Haitham al-Ghais, who was elected to the position on Jan. 3, is tasked with bringing a new face to the oil cartel during its season of discontent, according to S&P Global Platts.

"Political pressure on OPEC from oil consuming countries is nothing new, but has become particularly acute since oil prices reached multi-year highs in October," Mr. Sheldon told S&P Global Platts in a separate interview this week. "A historically rare, price-related SPR release from the U.S. and others sets a new precedent OPEC+ may need to incorporate into future production decisions."

Today is Thursday, January 20, 2021, and here is today’s essential intelligence.

With Rate Hikes Near, The Fed Has A $9 Trillion Balance Sheet Problem 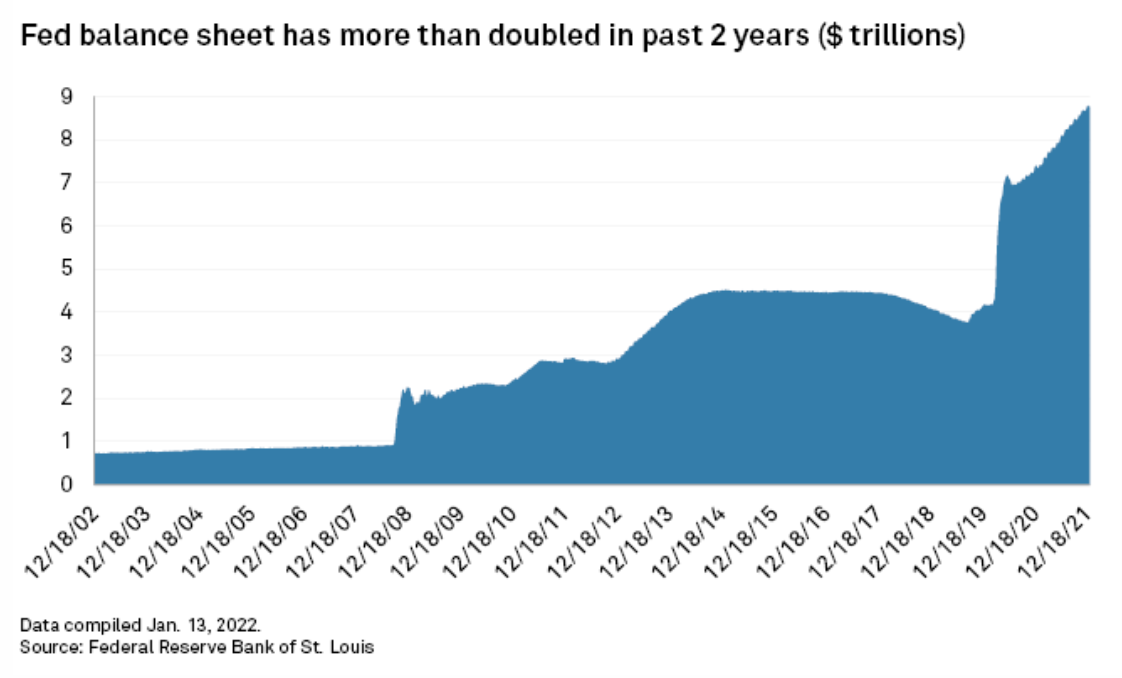 The U.S. Federal Reserve is moving to tighten monetary policy, ending its bond-buying program in March, with rate hikes to follow shortly after. That leaves central bank officials with a key challenge: reducing the central bank's nearly $9 trillion balance sheet far earlier than most market watchers anticipated. The Fed balance sheet, fattened by the bank's $120 billion in monthly securities purchases since the start of the COVID-19 pandemic, has grown to unhealthy economic levels, economists and strategists argue, with its sheer size distorting the bond market and threatening the future shape of the yield curve.

Latin American Equities Close 2021 In The Red For A Second Consecutive Year, Driven By Weakness In Brazil

2021 started on a hopeful note, with COVID-19 vaccines coming to save the world. However, as in many other parts of the world, Latin American countries struggled to control the pandemic’s impact on their economies and societies. Additionally, political uncertainty and civil unrest in several countries contributed to a disappointing year. While most global markets experienced strong performance in 2021, the S&P Latin America BMI finished the year down 12%, with negative returns in three out of four quarters. 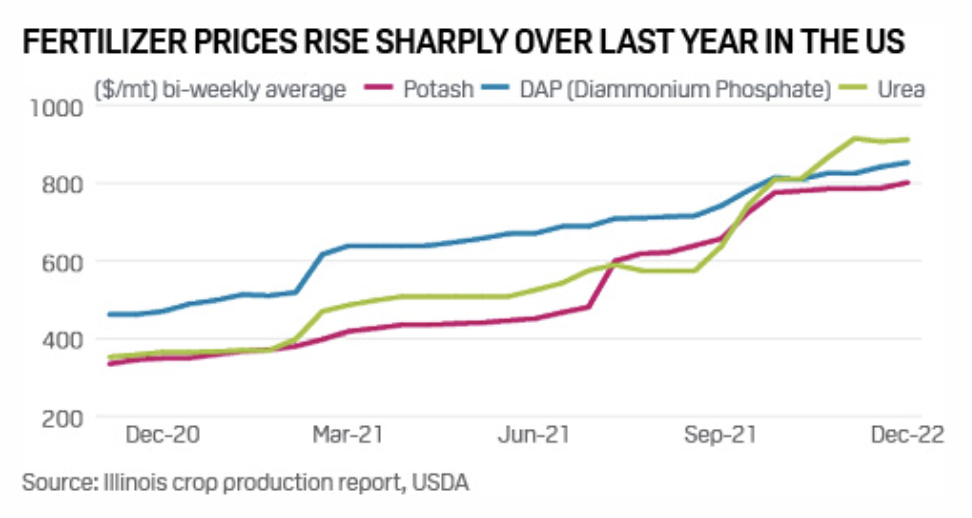 Global fertilizer prices soared to multi-year highs in the past few months following surge in prices of key feedstocks natural gas and coal, and certain export restrictions put in place by supplying countries. Around the globe, natural gas is used as a raw material as well as fuel for nitrogen fertilizer production. In some countries such as China, coal is gasified into ammonia and used for manufacturing fertilizers. Nitrogen fertilizers are the most used fertilizers in the world. Ammonia, phosphorous, and potash are the other important fertilizer components. 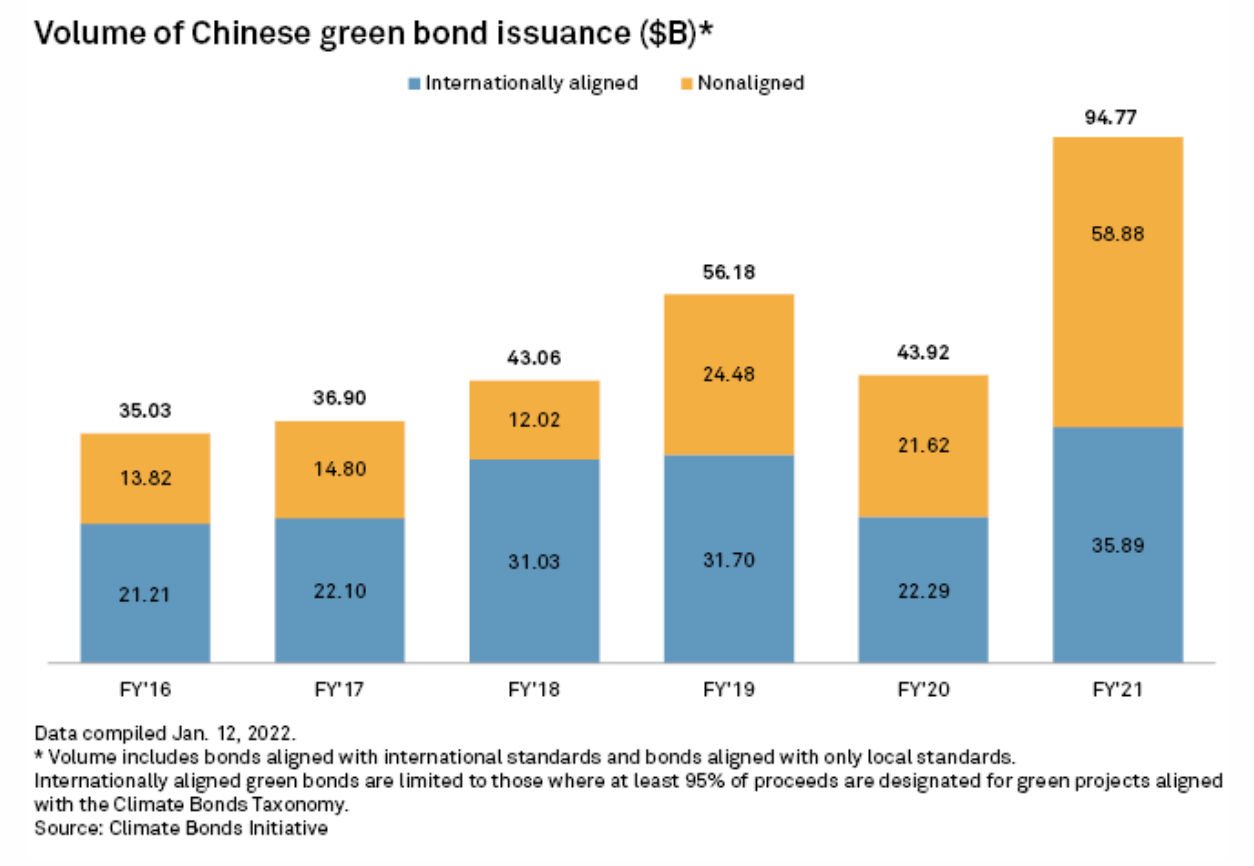 The issuance of Chinese green debt, including instruments that only meet local standards, could grow by at least 80% this year after raising $94.77 billion in 2021, said Anish Ailawadi, senior director and head of investment banking at research and analytics firm Acuity Knowledge Partners. The world's largest carbon dioxide emitter is expected to align its definition of green projects with the global taxonomy to draw more international investors, after excluding fossil fuel-related projects when they revised the list of projects eligible for issuing green debt in April 2021, analysts said.

Copper prices were on a roller-coaster ride in 2021 with demand recovery in U.S. and Europe, logistics issues, COVID-19 disruptions, and power cuts in China all contributing to the price fluctuations. Futures backwardation also hit a historical high in 2021. Apart from copper prices, copper cathode import premium to China and copper concentrate treatment charges hit an all-time low. In 2022, increasing supply from new and existing mines is likely to be one of the key factors to watch out for.

Listen and subscribe to Commodities Focus, a podcast from S&P Global Platts

Microsoft Not Playing Around With $68.7B Buy Of Activision 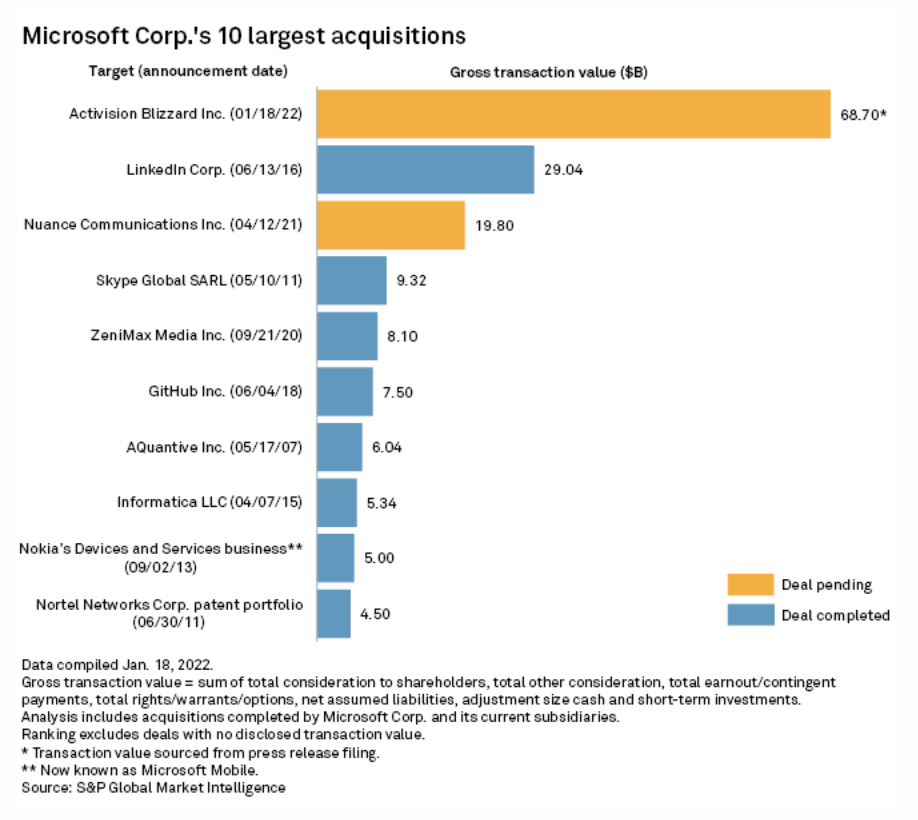 Microsoft Corp. on Jan. 18 agreed to acquire Activision Blizzard Inc. for $95 per share in cash, valuing the game publisher and developer at $68.7 billion, including net cash. Following the deal's expected completion in fiscal 2023, Microsoft expects to become the world's third-biggest gaming company in terms of revenue, behind China's Tencent Holdings Ltd. and Japan's Sony Group Corp. The transaction is Microsoft's biggest so far by value, coming in at more than twice the size of Microsoft's $29.04 billion buy of professional social networking platform LinkedIn Corp. in 2016.