Markets are reeling as Russia is attacking Ukraine following what President Vladimir Putin described as “a special military operation” and NATO Secretary General Jens Stoltenberg condemned as a “brutal act of war.”

As the military incursion into Ukraine intensifies with airstrikes, shelling, and explosions in critical regions—including the capital, Kyiv, the second-largest city, Kharkiv, and the major port city of Odessa — the geopolitical crisis poses serious threats to human life, credit conditions, financial markets, energy and metals supply and prices, and commodities and agriculture trade on a global scale.

Ukrainian officials reported that several of the government’s and country’s banks’ websites had been hit by cyberattacks. S&P Global Ratings sees a heightened risk that Ukraine will be the target of additional cyberattacks, which could affect credit conditions for corporations, governments, and other parties inside and beyond the region.

The U.S., EU, U.K., Japan, and other NATO-allied countries levied economic sanctions against Russia’s sovereign debt, biggest banks, oligarchs and their families, commercial shipping vessels, and Nord Stream 2. Stricter sanctions could be implemented against Russian exporters in the short-term. And the controversial gas pipeline project is unlikely to ever be revived, according to S&P Global Platts. The world is watching to see what happens on the ground, how the geopolitical balance plays out, whether sanctions evolve, and if energy and commodity security is disrupted.

“The imposition of strict sanctions, along with any countermeasures from Russia, could hinder the operations of exposed borrowers and have broader ramifications, such as a temporary energy price shock in Europe—which could exacerbate inflationary pressures,” S&P Global Ratings said in a recent special update to its credit conditions outlook for 2022.

Japan doesn’t anticipate current conditions to immediately disrupt its stable energy supply as it imposes sanctions on Russia. "We understand that sanctions taken by Japan, the U.S., and Europe are not having an impact on the current energy flow," a source with Japan’s Ministry of Economy, Trade, and Industry told S&P Global Platts Feb. 24.

Crude oil futures trading on the April ICE Brent contract hit an intra-day high of $100 per barrel in late morning trade today in Asia before quickly rising to $101 per barrel, according to S&P Global Platts. Europe's TTF gas price rose as much as 35% in early trading today, as well. Russia is a key supplier of oil and petroleum products to the U.S. and natural gas to Europe. Both Russia and Ukraine are key suppliers of wheat to the Middle East and European nations and vegetable oils to other countries. Asian economies may not be as affected by the sanctions since they are not as reliant on Russia for energy supply, but some Chinese buyers have apparently been advised against purchasing Russian coal by authorities, sources told S&P Global Platts Feb. 24.

"$100 per barrel is just a landmark,” Vandana Hari, CEO of the energy research firm Vanda Insights, told S&P Global Platts. “If Russia does mount a full-scale invasion, it will blow the roof off oil prices.”

"Oil markets are understandably on edge due to Russia's outsized market position and 2.7 million barrels per day of crude exports to Europe,” S&P Global Platts Analytics said in a note. “But Platts Analytics still does not anticipate a notable supply curtailment from Western sanctions or Russia holding back large volumes.”

Today is Thursday, February 24, 2022, and here is today’s essential intelligence. 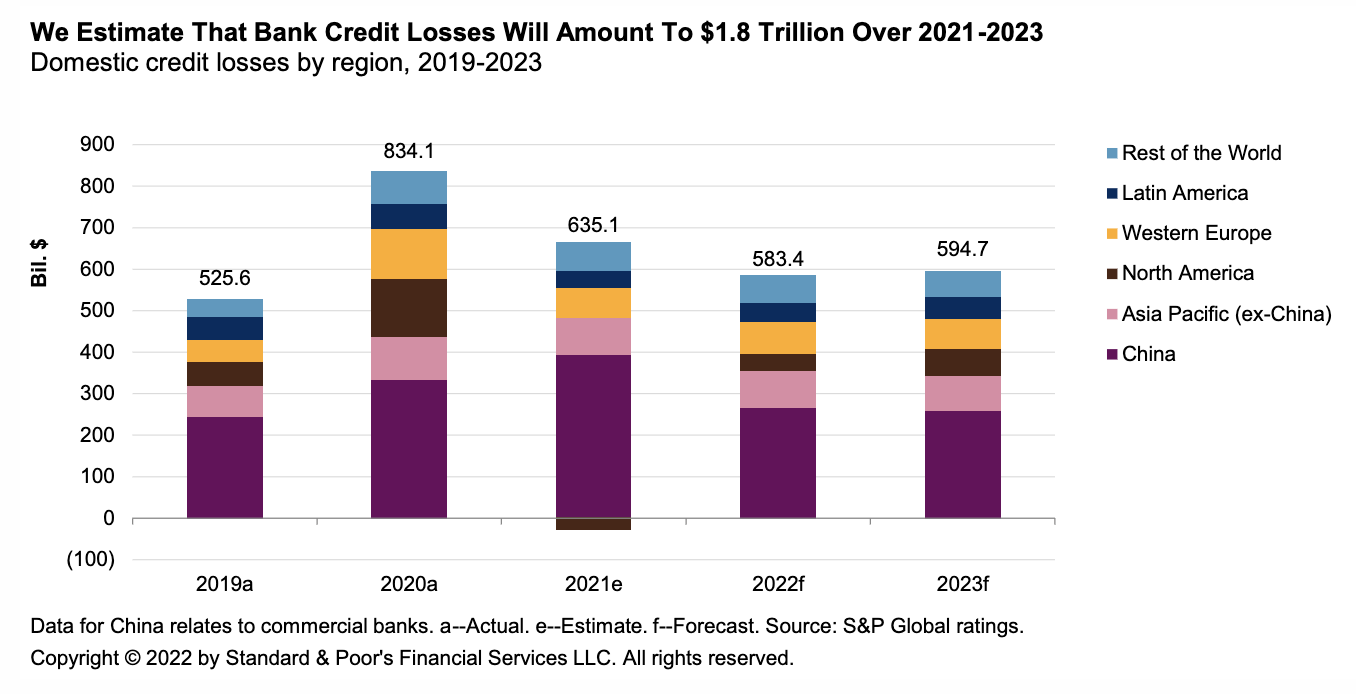 Across the 86 banking systems that S&P Global Ratings covers, it expects credit losses will amount to around $1.8 trillion over the three years to end-2023. China's commercial banking system accounts for just over half of this total, reflecting the sheer size of that system in a global context, the relatively greater reliance of the Chinese economy on bank financing relative to capital market financing, and stringent provision-coverage regulations for nonperforming loans. In the latest edition of Capital Markets View, Taron and Chris take a look at how the year started for leveraged finance over the month of January and how things have changed since then with geopolitical tensions and an increasing inflationary and interest rate environment impacting the loan and bond market in Europe over the past few weeks./p> 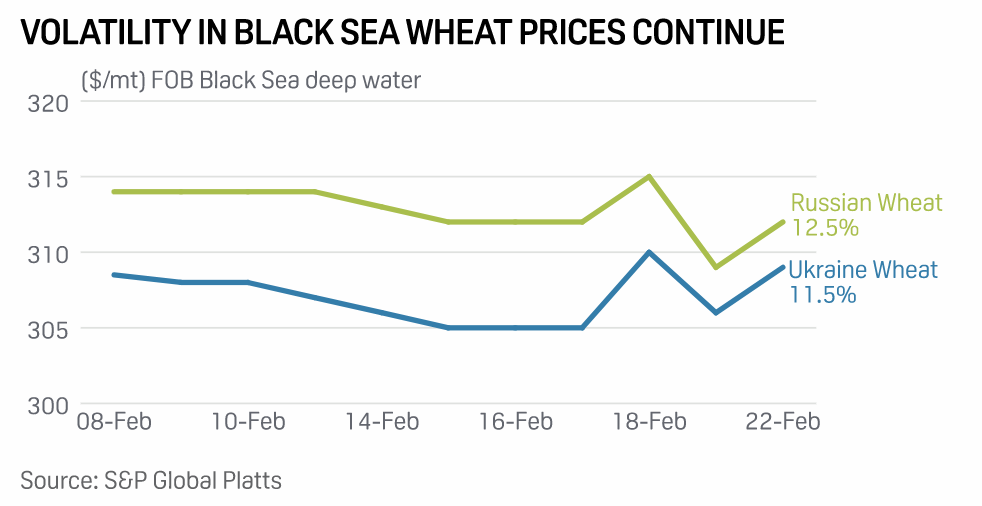 Volatility in Black Sea wheat prices has continued in recent days due to the ongoing tensions in the region, with export prices of wheat from Ukraine and Russia both having risen, traders said. According to S&P Global Platts assessments, on Feb. 22 prices of 12.5% protein Russian wheat were at $312/mt, while 11.5% protein Ukrainian wheat prices were at $306/mt, both up $3 day on day. Russia has deployed troops into breakaway sections of eastern Ukraine this week on a "peacekeeping mission." Meanwhile, Ukraine has also called up reservists to conscript its own forces. 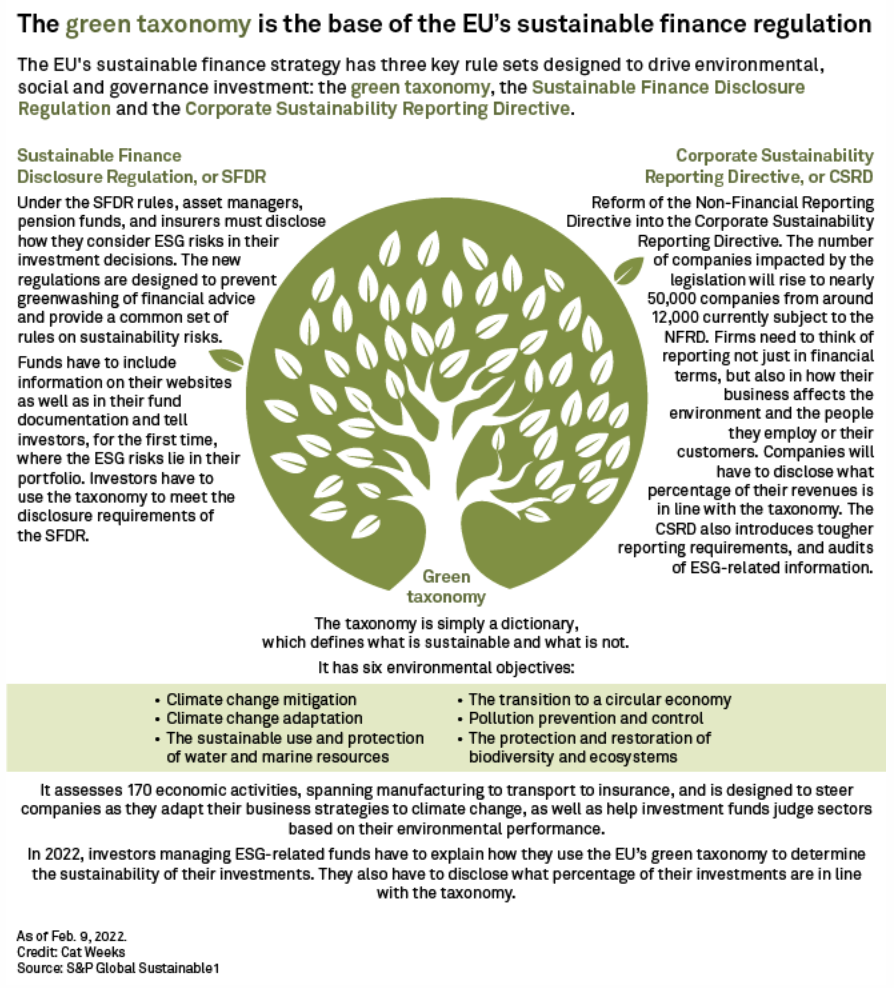 The EU taxonomy is a key component of the EU’s sustainable finance agenda and has become something of a buzzword in the world of ESG investing as one of the leading attempts to define green investments consistently and comprehensively. The EU aims to mobilize some €1 trillion in public and private investment over 10 years as part of its “Green Deal” to help it achieve its ambitious climate targets. And there are an estimated €3.3 trillion in ESG assets under management in the EU — so changes to the framework could sway investment decisions for large fund managers and their customers.

Listen: $100/B Oil — Implications For Asia, The World And Energy Transition

When the outbreak of the COVID-19 pandemic decimated global oil demand and pulled down prices to their lows in 2020, not many would have believed that just two years down the road, crude oil would be again climbing to $100 a barrel. In a wide-ranging discussion with Sambit Mohanty, Asia Energy Editor at S&P Global Platts, Jim Rogers, Chairman of Beeland Interests, Inc., Rosemary Griffin, Managing Editor for Russia at Platts, and Kang Wu, Head of Global Demand and Asia Analytics at Platts, share their insights on the resiliency of Asian oil demand recovery, the risk to prices and trade flows from Russia-Ukraine tensions, the potential return of Iranian oil, as well as the implications of surging oil prices on energy transition efforts. 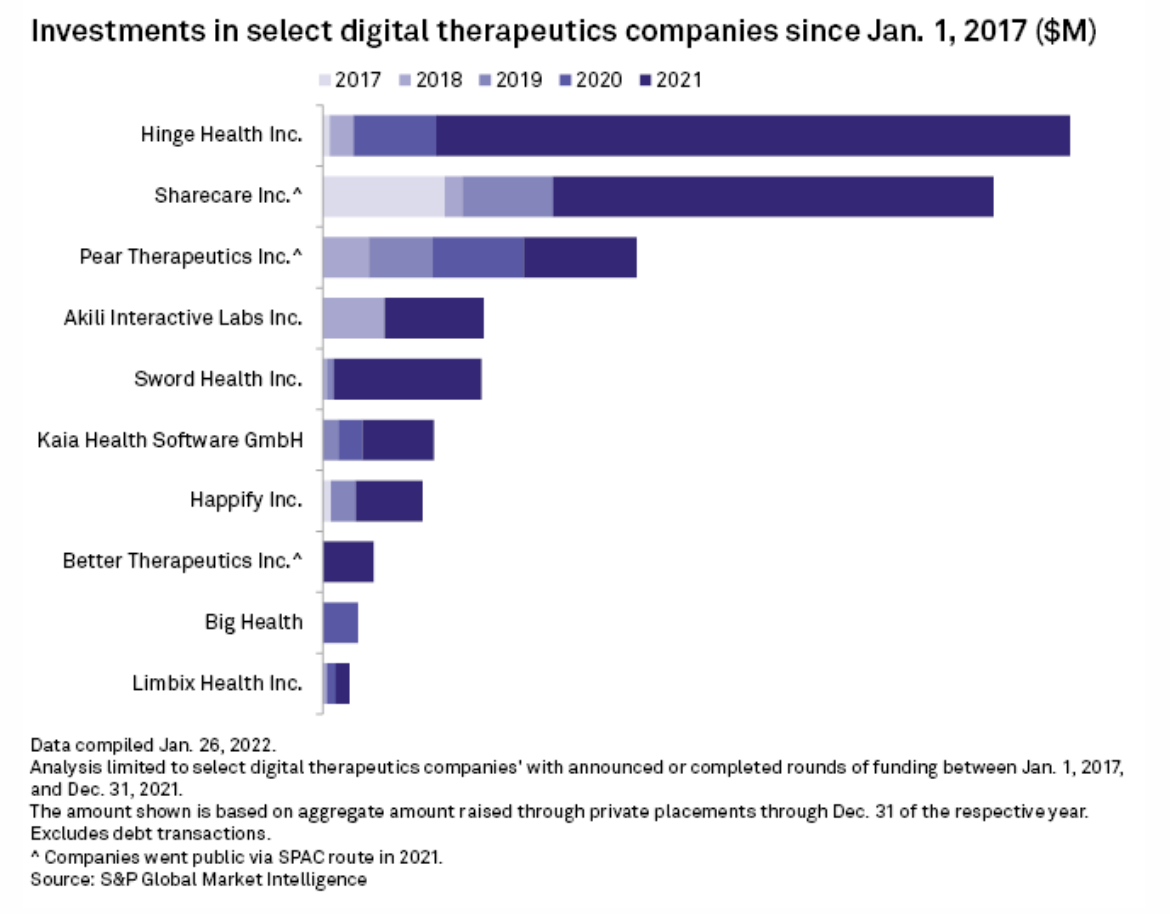