The U.S. Centers for Disease Control and Prevention recommended pausing the use of Johnson & Johnson’s coronavirus vaccine across the country due to cases of rare blood clots in a few recipients. European countries will pivot to prioritizing the Pfizer vaccine after also halting the distribution of the J&J vaccine and stopping the rollout of the AstraZeneca vaccine due to a possible link between that jab and extraordinarily atypical blood clots that are sometimes fatal. Denmark has decided to permanently abandon the AstraZeneca vaccine. South Africa’s health minister, who had already decided to temporarily taper the use of the AstraZeneca option in the country’s vaccine strategy, will now also refrain from authorizing further deployment of J&J’s.

S&P Global Ratings expects the global economic rebound to roar in the second half of this year, with GDP growing 5.5% for the year. But current and further disruptions to nations’ efforts to inoculate the world’s population in the race between vaccinations and mutations may make the outlook even more uneven than it already stands.

“Widespread immunization, which will help pave the way for a return to more normal levels of social and economic activity, looks to be achievable by most developed economies by the end of the third quarter. However, some emerging markets may only be able to achieve widespread immunization by year-end or later,” S&P Global Ratings’ Chief Economist Paul Gruenwald said in his economic outlook for the second quarter of 2021. “The degree of convergence back to normality depends on what shape the post-COVID economy takes and how quickly we get there. While we agree that the recovery from the pandemic is more accurately called a restart, we are not going back to an end-2019 world. Priorities and preferences have changed and that means the composition of production and consumption will change. And at this juncture there is much uncertainty: we don't know exactly what this post-COVID world looks like.”

The U.S.’s recovery—which S&P Global Ratings anticipates will begin to register as annualized growth of 11.3% in the second quarter, following the 6.3% in the first quarter of this year—will be a meaningful driver of the global economic rebound.

Despite the setbacks spurred by concerns over the single-dose J&J jab, U.S. President Joe Biden has promised all adults in the country will be able to obtain vaccines starting April 19 at the latest. Confidence in vaccines remains high among many market participants.

“The pace of COVID-19 vaccines administered has picked up remarkably—to near 3.0 million average vaccinations per day, compared with 1.3 million the third week of February. The current pace of vaccinations is likely to help the U.S. get to the so-called ‘herd immunity,’ or estimated 75% of the population vaccinated, sometime in June,” S&P Global Ratings’ Chief U.S. Economist Beth Ann Bovino said in a report this week. “Thanks to improved vaccination rollouts, reduction of restrictions, and the large fiscal stimulus (the third over the past year), we expect to see marked improvement on all fronts of the economy in the spring.”

Still, no country can exist in a vacuum. The U.S. may be administering vaccines at a more rapid pace than many of its advanced economy peers, but "until the world really is vaccinated, we're all going to be at risk of new mutations, and we won't be able to really resume activity with confidence all around the world," Federal Reserve Chairman Jerome Powell said at the International Monetary Fund's spring meetings on April 8.

Increased access to inoculations comes as good news in a period of prolonged suffering and offers a pathway out of the pandemic. But attention shifting overwhelmingly to vaccinations may overshadow the importance of maintaining adequate amounts of medical supplies to diagnose and treat COVID-19.

U.S. imports of medical supplies previously deemed necessary to treat the pandemic declined month-over-month in February by 11.4% on a day-adjusted basis, according to an analysis by Panjiva, part of S&P Global Market Intelligence. Likewise, Panjiva data found that U.K. imports of medicines fell by 42.2% sequentially in January and by 38.7% year-over-year.

“There’s been an unwelcome return of medical protectionism,” Panjiva said in its second quarter outlook. “The distribution of vaccines globally will likely take more than the remainder of 2021 to complete, with herd immunity levels even in the more advanced countries unlikely to be achieved by the end of Q2’21. That will maintain the need for all the other products needed to protect against, diagnose, and treat COVID-19 on an ongoing basis.”

Today is Thursday, April 15, 2021, and here is today’s essential intelligence. 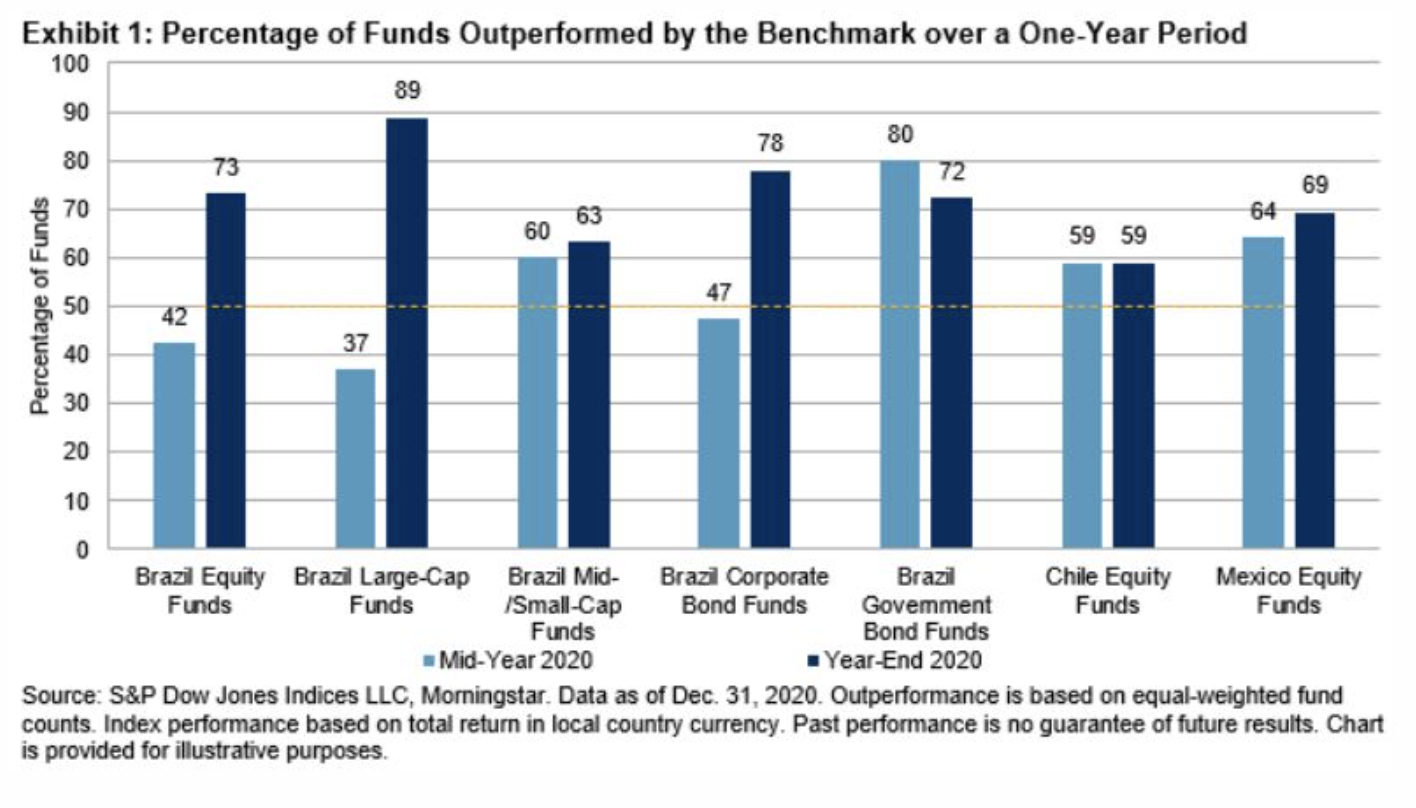 The recently published SPIVA® Latin America Year-End 2020 Scorecard shows that the volatile environment of 2020, though potentially favorable for high-conviction active managers, did not necessarily translate into success for active managers.

When the pandemic began, many investors feared widespread dividend cuts. However, while some companies did cut or suspended their dividends, the damage was largely confined to the pandemic’s early stages. Once the economy began to stabilize, so did dividends. By the end of 2020, approximately three times as many companies in the S&P 500 raised their dividends as cut them.

Bitcoin has gained ground to rival gold as a store-of-value investment because, like gold, it is a hedge against currency devaluation and volatility, cryptocurrency market sources say.

Rebooting The U.S. Media Sector: 2021 Advertising Trends are Nicely Up, With Some Sectors Lagging

Recessionary uncertainty and secular change across the U.S. media sector have presented the advertising industry with many opportunities and challenges since the global pandemic's onset last year. Where S&P Global Ratings first saw a spate of downgrades and negative outlooks, some positive momentum and advertising trends can now be seen outpacing previous assumptions. When will the U.S. economy recover, and how fast can it happen? Which advertising segments will be better off when all is said and done? How are advertisers preparing for the new normal?

The Future of Banking: Can Digital-Only Banks Crack Malaysia? 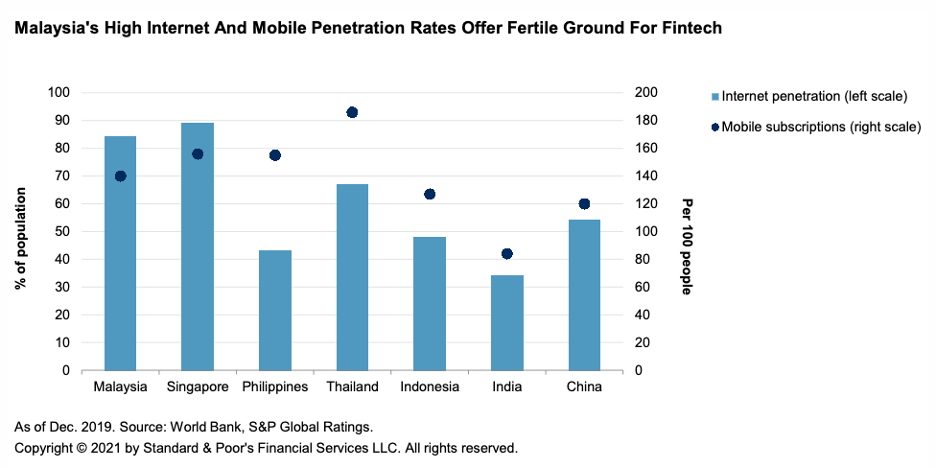 Digitalization of financial services in Malaysia will likely accelerate with disruption caused by COVID-19 and the entry of digital-only banks. S&P Global Ratings expect digital-only banks to remain niche players for the next three to five years due to initial operational constraints and the likely competitive pressures in funding. Industry leaders such as Maybank and CIMB are better placed than peers to respond to the challenges and explore new growth opportunities.

Ant Group Co. Ltd.'s financial services business, which contributes more than 60% of its revenue, will likely take a significant hit as cross-selling to payments users will no longer allowed under a restructuring plan pushed by the Chinese government on anti-monopoly grounds. 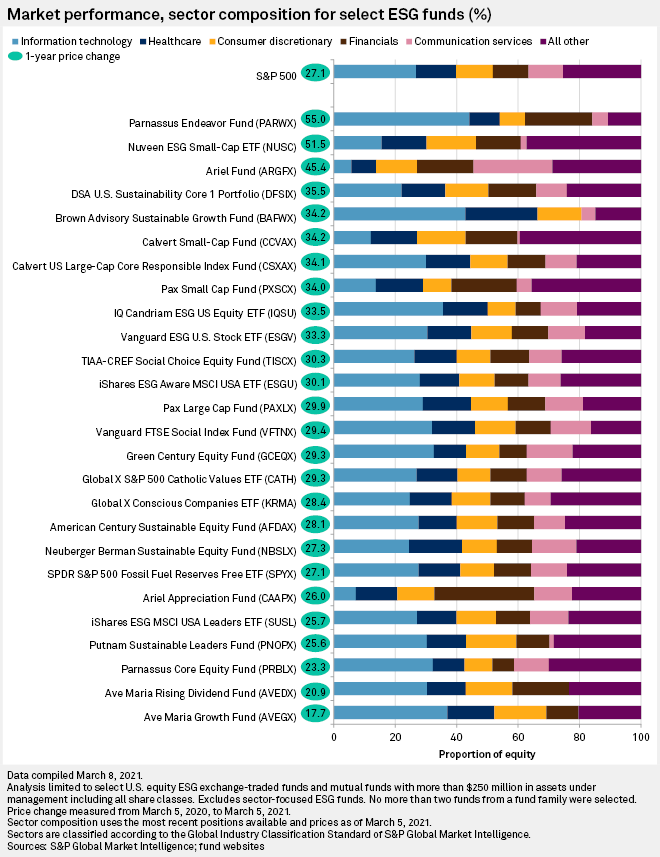 In the first 12 months of the COVID-19 pandemic, many large investment funds with environmental, social and governance criteria outperformed the broader market. One fund went from being among the poorest performers to the top of the list following tweaks to its portfolio. S&P Global Market Intelligence analyzed 26 ESG exchange-traded funds and mutual funds with more than $250 million in assets under management, and found that from March 5, 2020 — the month that the World Health Organization officially declared COVID-19 a pandemic — to March 5, 2021, 19 of those funds performed better than the S&P 500. Those outperformers rose between 27.3% and 55% over that period. In comparison, the S&P 500 increased 27.1%.

Carbon offset credits have been issued for cattle methane emissions reduction in what the company involved says is the world's first such issuance. Swiss agriculture technology company Mootral has launched the carbon crediting system for reducing methane emissions from cows. The move highlights the growing links between the global agriculture business, international carbon markets and end users in the heavy industrial sectors who need carbon offsets to meet net-zero emissions targets.

China's national emissions trading system, or ETS, which launched earlier this year, will be instrumental in meeting the country's 2060 carbon neutrality goals by using market-based mechanisms, with tighter regulations allowing for more rapid decarbonization of the power sector, the International Energy Agency said in its latest report on China's ETS.

In a strategy presentation in February, Miguel Stilwell de Andrade, CEO of EDP - Energias de Portugal SA, pledged that his company, one of Europe's biggest utilities, would not own any natural gas-fired power plants in 2030, the date by which it wants to reduce its direct emissions to net-zero. The commitment came less than a month after another power giant, Enel SpA, said it would get out of gas by 2050, its own target date for carbon neutrality. "That's clearly a future where there is no gas," said Salvatore Bernabei, CEO of the utility's renewables business. The statements were some of the clearest indications yet that natural gas, long hailed as a transition fuel by policymakers and industry advocates in Europe and elsewhere, is starting to lose its luster for the largest energy producers as they strive to reach net-zero.

Container shortages and high freight rates have proven to be a major hurdle for international trade in the last six months. Nowhere has this been more so than for various agricultural products. S&P Global Platts shipping and agricultural editors come together to discuss the fallout from global container freight shortages and how they have affected the rice, sugar and used cooking oil markets.

Global air travel continues to recover from 2020 lows but large regional differences remain and uncertainties over vaccine 'passports' mean the hard-hit sector is set for a slow and bumpy return to normality.