Low Volatility in Europe and Asia

Investing in infrastructure has become popular among institutional and private investors in recent years. Investors could be attracted to the potentially long-term, low-risk, and inflation-linked profile that can come with infrastructure assets, and they may find that it is an alternative asset class that could provide new sources of return and diversification of risk.

WHY CONSIDER INVESTING IN INFRASTRUCTURE?

Infrastructure assets provide essential services that are necessary for populations and economies to function, prosper, and grow. They include a variety of assets divided into five general sectors: transportation (e.g., toll roads, airports, seaports, and rail); energy (e.g., gas and electricity transmission, distribution, and generation); water (e.g., pipelines and treatment plants); communications (e.g., broadcast, satellite, and cable); and social (e.g., hospitals, schools, and prisons). Infrastructure assets operate in an environment of limited competition as a result of natural monopolies, government regulations, or concessions. The stylized economic characteristics of this asset class include the following:

Consequently, the infrastructure asset class may provide investors with a degree of protection from the business and economic cycles, as well as attractive income yields and an inflation hedge. It could be expected to offer long-term, low-risk, non-correlated, inflation-protected, and acyclical returns.

It is also generally believed that infrastructure is, as an asset class, poised for strong growth. As the global population continues to expand and standards of living around the world become higher, there is a vast demand for improved infrastructure. This demand includes the refurbishment and replacement of existing infrastructure worldwide and new infrastructure development in emerging markets.

Financing public infrastructure has traditionally been the responsibility of the state. However, fiscally constrained governments are increasingly turning to the private sector to provide funding for new projects. As a result, the investment opportunities in this sector continue to grow.

DIRECT AND INDIRECT EXPOSURE TO INFRASTRUCTURE

Exposure to infrastructure can be achieved either directly or indirectly.

Direct exposure is gained through private markets in which investors own the companies that build or operate the infrastructure assets, like toll roads, airports, etc. The most important benefit of investing through these vehicles is that market participants obtain the direct exposure they are looking for and all of the benefits that come with owning the infrastructure itself.

On the other hand, infrastructure assets are often highly regulated, so this type of investment can have more concentrated regulatory risk. It also often involves significant leverage, along with the risks that are bundled with it. The other potential downside is that these assets are illiquid, so there is no price transparency on an ongoing basis. Market participants would typically have to invest in the asset class for the long term, as there are no liquid secondary markets in which their investments could be quickly traded.

Indirect investment can be achieved through publicly listed companies whose business is directly related to infrastructure assets.

The primary advantage of listed infrastructure vehicles is that they are traded on an exchange. The size of the listed market is large—the total market capitalization of the universe of “pure-play” infrastructure companies, from which the Dow Jones Brookfield Global Infrastructure Index is constructed, was USD 1.76 trillion as of Dec. 31, 2019. Listed companies also provide access to unique assets that might only be available in public markets. Daily price transparency and relative liquidity, which are characteristics of listed companies, are important to many market participants. Listed firms also have extensive financial reporting requirements that are regulated by the various stock exchanges.

A number of new infrastructure indices (capturing only publicly listed infrastructure securities) have emerged since the mid-2000s. Most indices take one of two construction approaches: either applying a market-cap-weighting methodology to infrastructure sectors (in which case, utilities will always dominate the index) or imposing hard caps on these sectors. In order to identify effectively companies with the pure-play characteristics previously outlined, it is necessary to dig into financials and identify what percentage of earnings comes from competitively exposed versus regulated lines of business.

Managers in infrastructure investment may consider different benchmarks, depending on their own definition of the investment universe. Some managers favor pure-play infrastructure sectors, considering only stocks with stable cash flow patterns and low correlations to broader equities for portfolio inclusion. Other managers operate under a less-constrained definition of the space, with a thematic view of what constitutes infrastructure. Such portfolios may include infrastructure-related companies such as shipping, diversified communications, power generation, etc. 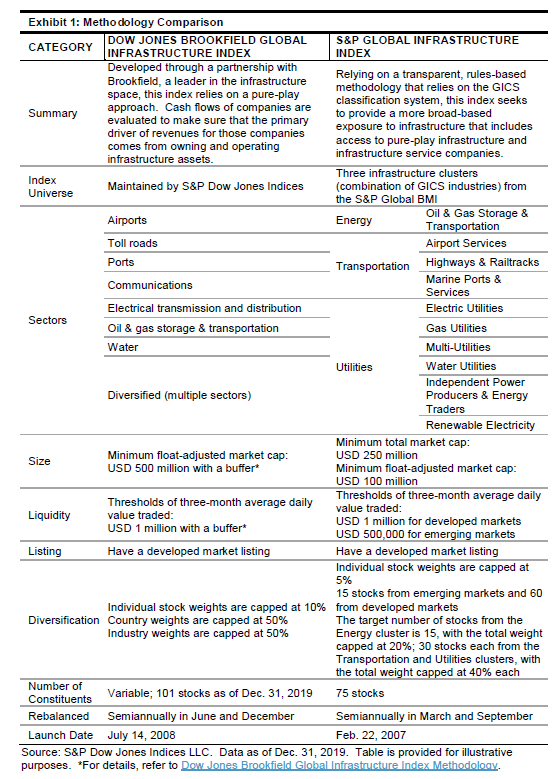 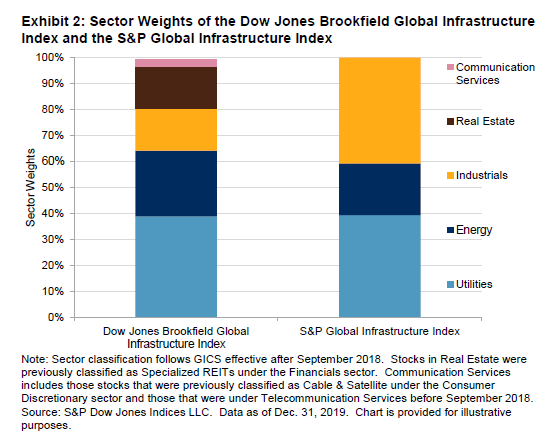 The risk/return profile of the Dow Jones Brookfield Global Infrastructure Index, which takes a pure-play approach, is differentiated from that of an index taking a broad-based approach (as seen in Exhibit 4). The Dow Jones Brookfield Global Infrastructure Index has shown the highest return and risk-adjusted return over the past 10 years. The index has an annualized return of 10.22% over the past 10 years, outperforming the S&P Global BMI by 1.34% and all other infrastructure indices studied here by more than 3.45% per year. 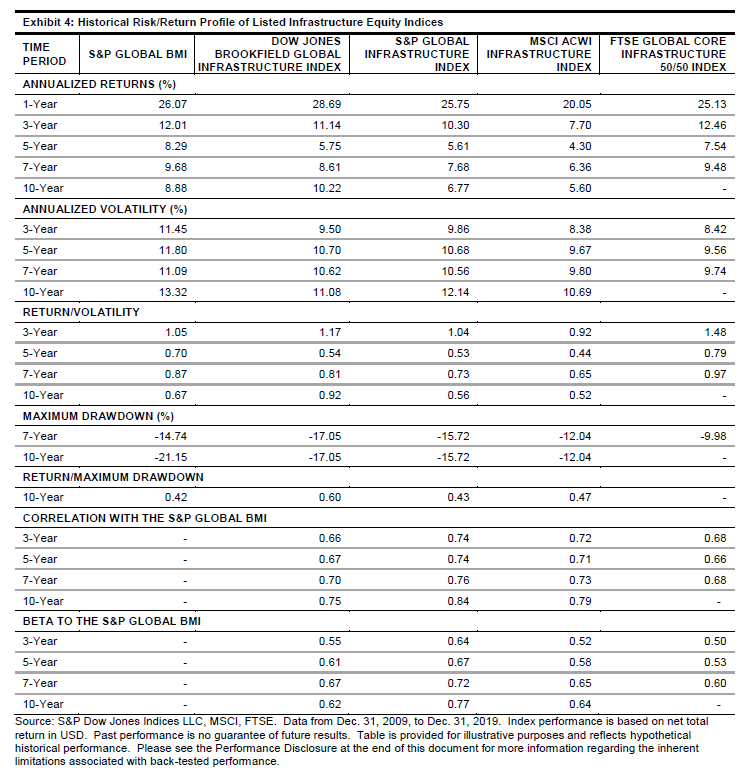 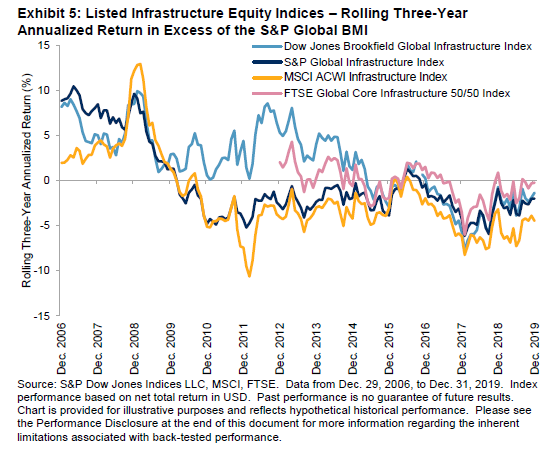 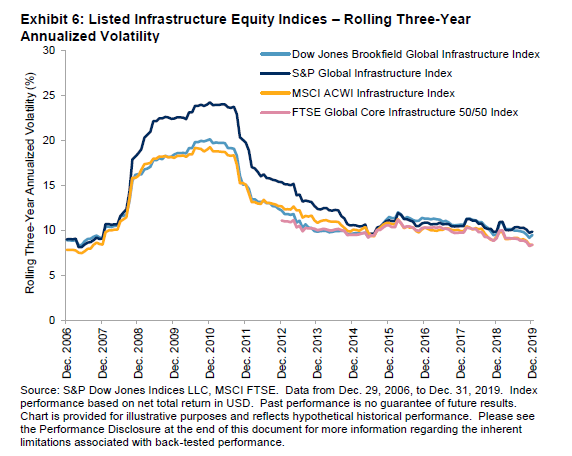 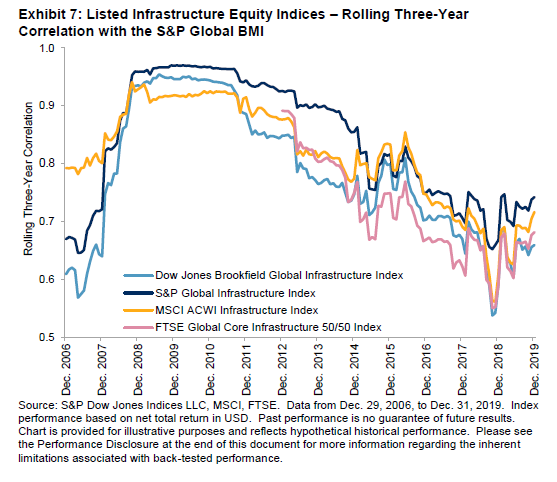 One of the potential benefits of investing in infrastructure is the historical inflation hedge that it has provided. To illustrate this, we studied the relationship between the indices’ monthly returns and inflation rates3 compared with the broad market benchmark. Exhibit 8 shows that over the past 17 years (from Dec. 31, 2002, to Dec. 31, 2019), the Dow Jones Brookfield Global Infrastructure Index and the S&P Global Infrastructure Index have outperformed the S&P Global BMI by a monthly average of 40 bps and 18 bps, respectively, in high-inflation months. These two indices have slightly underperformed the S&P Global BMI in low-inflation months. 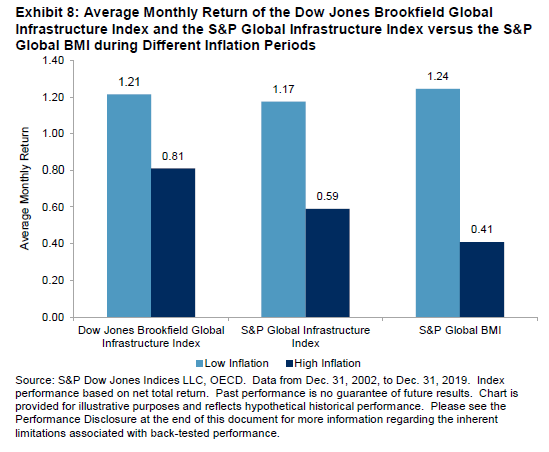 The impact of oil prices on companies owning or operating infrastructure assets is not trivial. First, there is generally low exposure to oil prices, as companies that typically own or operate these assets tend to have stable cash flows backed by long-term contracts that are sometimes regulation enabled. It also helps that most of these assets are monopolistic in nature. 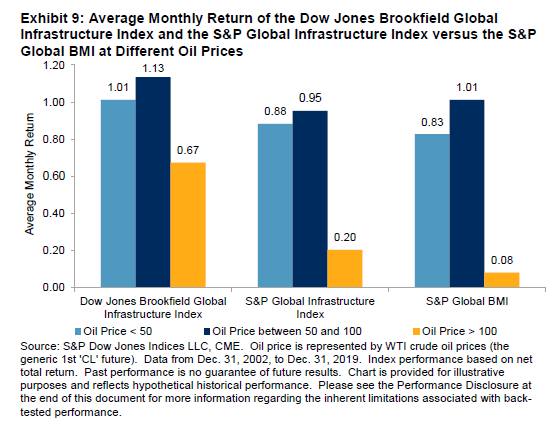 Third, the sensitivity to oil prices varies from company to company, depending on whether they are net consumers or producers of oil. Exhibit 10 shows the average monthly return of the Dow Jones Brookfield Global Infrastructure Sector Indices at different oil prices from Dec. 31, 2002, to Dec. 31, 2019. Oil & Gas Storage & Transportation seemed to be the infrastructure subsector most negatively affected by low oil prices. Other sectors, except Water, seemed to benefit from low oil prices. 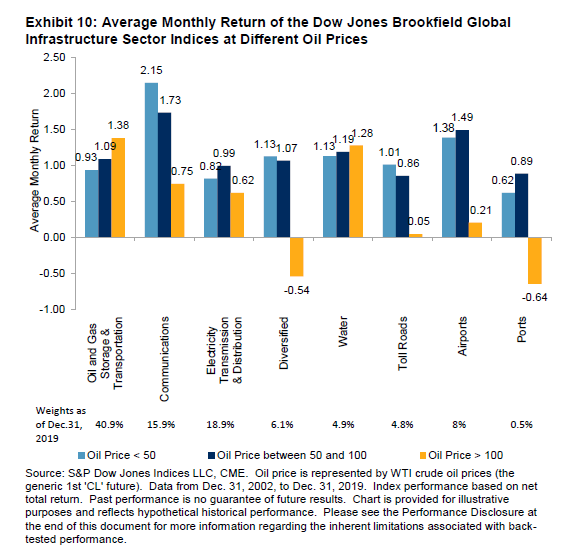 Among all eight Dow Jones Brookfield pure-play sectors, the Dow Jones Brookfield Global Infrastructure Index is most heavily exposed to Oil & Gas Storage & Transportation. As of Dec. 31, 2019, it took up 41% of the index and averaged 43.01% over the past 10 years (see Exhibit 11). 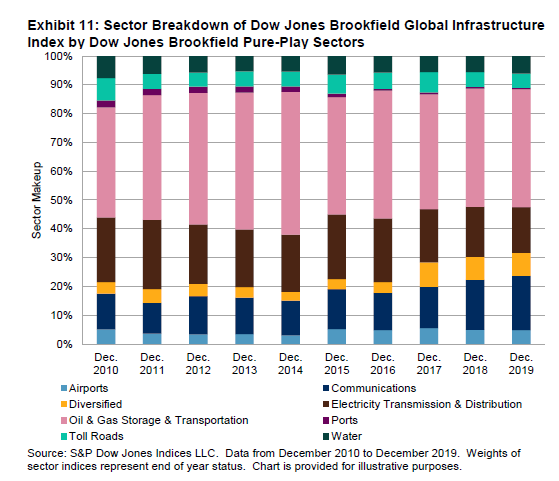 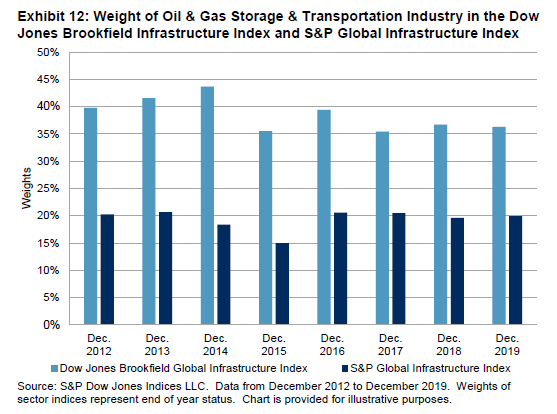 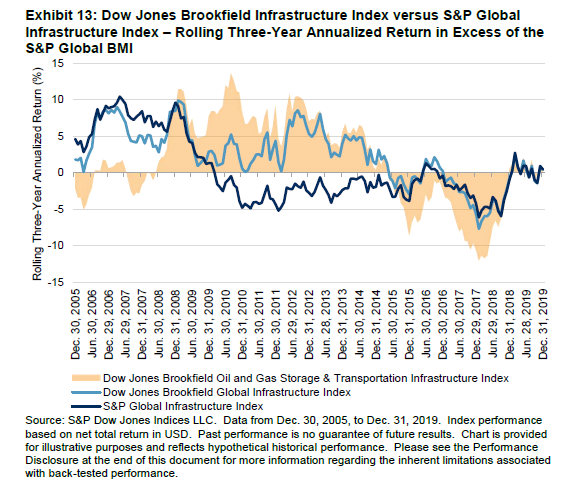 Infrastructure could offer return, risk, and diversification characteristics that are different from those of other asset classes; thus, it may merit consideration for allocation in a diversified portfolio. 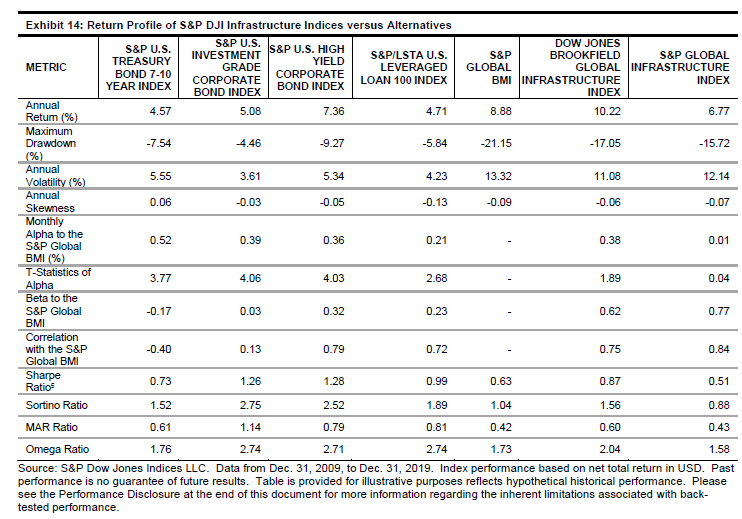 Diversification is the key advantage of infrastructure ownership in a portfolio context. Over the past 10 years, the Dow Jones Brookfield Global Infrastructure Index had a correlation of 0.01 with U.S. Treasury Bonds, 0.40 with U.S. investment-grade corporate bonds, 0.75 with U.S. high-yield bonds, 0.57 with global leveraged loans, and 0.75 with global equities (see Exhibit 16). 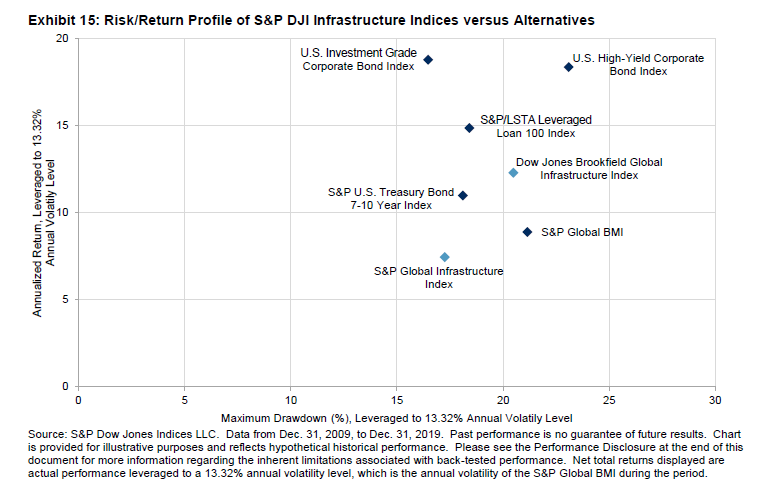 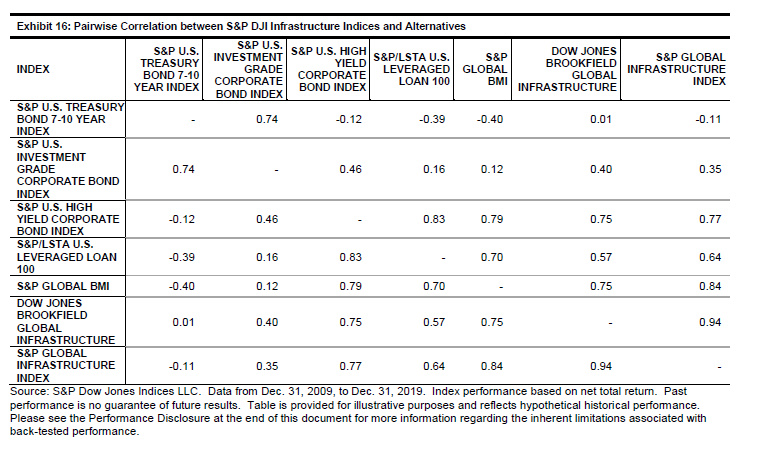 Finally, we performed two traditional Markowitz mean-variance optimizations, with and without the Dow Jones Brookfield Global Infrastructure Index included in the opportunity set of U.S. medium-term Treasury Bonds, investment-grade corporate bonds, high-yield corporate bonds, leveraged loans, and global equities. The resulting historical efficient frontiers are presented in Exhibit 17. There is a clear improvement in the efficiency of the resulting asset allocations after adding infrastructure into the opportunity set. The portfolio information ratio was maximized with an allocation of 50% to U.S. medium-term Treasury Bonds, 47% to U.S. high-yield corporate bonds, and 3.2% to the Dow Jones Brookfield Global Infrastructure Index. 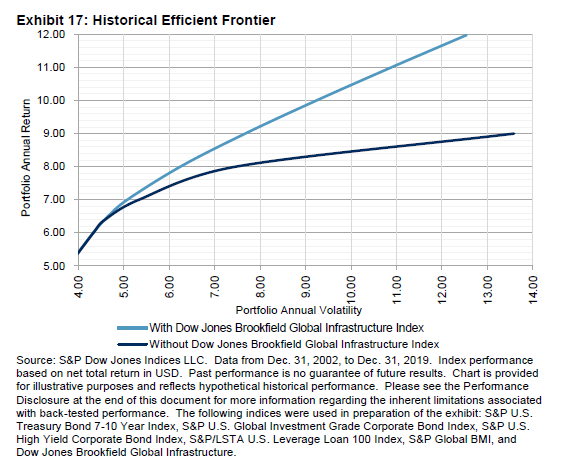