How US Transportation Credit Quality is Affected by COVID-19

Banks should take a relatively harsh view of credit when complying with a new accounting provision (the current expected credit loss model, or CECL) in 2020 in order to improve their returns in the coming years. S&P Global Market Intelligence estimates that banks will reserve for aggregate net charge-offs of $336.3 billion when adopting CECL.

But banks might find it difficult to support such a view of credit, given strength in current economic conditions and positive sentiment among consumers and businesses. In a less severe scenario, S&P Global Market Intelligence estimates that banks would reserve for aggregate net charge-offs of $260.3 billion when adopting CECL.

Support for a more sanguine view of credit comes from a Kensho Technologies model for forecasting net charge-offs. The Kensho model relies on macroeconomic data, delinquency rates and three financial stress indicators for consumers, businesses and real estate. The indicators capture internet search volumes for select keywords to measure anxiety surrounding the credit cycle in different areas of the economy.

Aug. 21 2018 — If U.S. banks have too rosy of an outlook when complying with the current expected credit loss model, they might defeat part of the accounting provision's purpose.

If CECL works counter-cyclically as intended, it will help banks prepare for the next downturn as they pull forward losses by reserving for them up front.

But many bankers have argued that it will prove difficult to predict turning points in the credit cycle. If banks do not see credit deterioration coming soon enough, they may end up having to build reserves significantly right when losses are peaking. With some worrying signs appearing on the longer-term horizon, institutions would be wise to focus on those potential threats and adequately build reserves when adopting CECL.

CECL impact comes down to your view of the credit cycle

CECL compliance begins in 2020 for many institutions and marks a considerable shift from the current model, under which banks set aside reserves over time. The new provision requires banks to substantially increase their allowance for loan losses on the date of adoption. If that adjustment exceeds retained earnings, the change will result in a capital hit to the industry.

Banks can use various methods to estimate future losses and will not be required to forecast beyond a reasonable and supportable period, which many institutions peg at 12 to 18 months. After that point, banks will rely on historical experience.

We then modeled how both reserving scenarios would play out against our previously published outlook for credit quality.

We assumed in our first scenario that institutions would share our credit quality outlook over the next 18 months. That outlook suggests credit quality will remain strong in the near term, in part due to the passage of tax reform, which put more money in borrowers' pockets. Current economic conditions are quite strong and the labor market is tight, but it is hard to see much improvement from current levels.

In 2020, economists expect further rate increases, higher unemployment, even slower economic growth and only modest increases in home prices. Higher spending from the tax reform legislation will also wane in 2020, serving as a drag on growth. Some market watchers even believe the yield curve could invert in 2020, suggesting that a recession could lie ahead.

Considering the prospect of rising delinquencies and the late stage in the current cycle, which stands as the second-longest on record, we think it is reasonable for banks to expect credit to sour. Our first CECL scenario assumes institutions would look at historical experience during the brief recession in 2001. 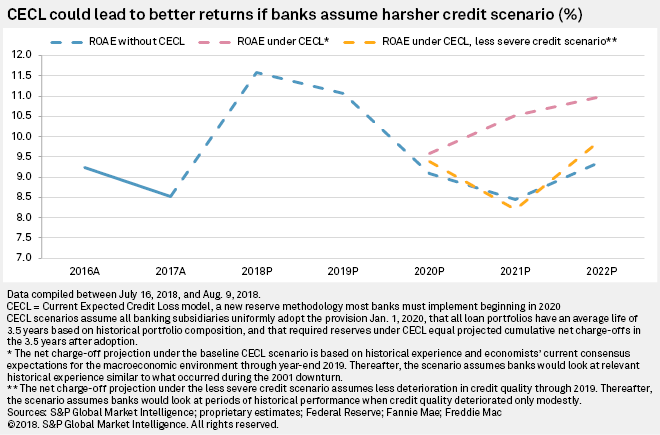 Using that credit experience as a guide, we estimate that banks would reserve for aggregate net charge-offs of $336.3 billion when adopting CECL in 2020. The industry's tangible equity-to-tangible assets ratio could fall to 8.54% in 2020, assuming uniform adoption of CECL by all banking subsidiaries at that time. That level is 100 basis points below projected capital if banks continued operating under the existing incurred loss model.

Measuring CECL's impact if there are legs in the cycle

Some observers do not share our view and might focus more on the strengths in current economic conditions, including positive sentiment among consumers and business. It seems reasonable to consider that some banks would forecast a more sanguine outlook for credit quality.

In a less severe scenario, we estimate that banks would reserve for aggregate net charge-offs of $260.3 billion when adopting CECL.

In that less severe scenario, returns after CECL adoption would be similar to those that would result if the accounting provision were not put in place, but profitability would be less consistent. Banks would still have to record material provisions for losses in 2021 and 2022, causing a drag on earnings. 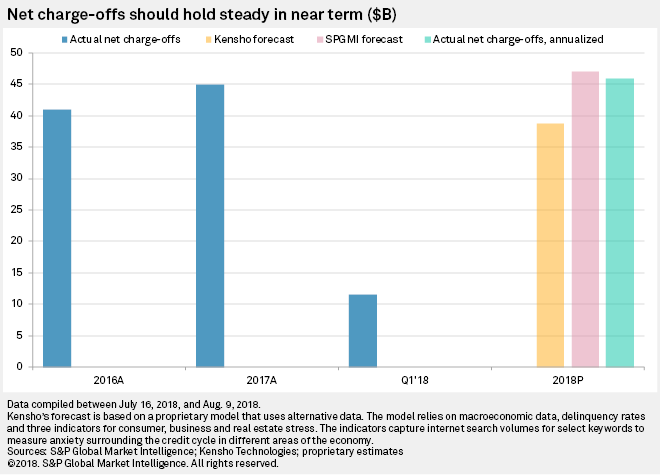 Some forecasters believe there could be further legs in the current economic cycle. Using alternative data to capture sentiment across the country, Kensho Technologies has developed a model to forecast net charge-offs. The Kensho model relies on macroeconomic data, delinquency rates and three financial stress indicators for consumers, businesses and real estate. The indicators capture internet search volumes for select keywords to measure anxiety surrounding the credit cycle in different areas of the economy.

The Kensho model projected credit losses at the individual bank level for the last three quarters of 2018. An analysis based on that model suggests that net charge-offs across the industry would total $38.59 billion, or 0.40% of estimated average loans, in 2018. That would represent a 13.5% year-over-year decline.

Assuming that came to pass, losses across the banking industry would fall well short of aggregate annualized first-quarter net charge-offs for only the fourth time since 2000. The three other occasions occurred in 2003, 2004 and 2013, when the economy recovered from a prior recession, reinforcing that the Kensho forecast captures improving sentiment across the U.S.

Returns, however, would be much stronger if banks adopted a harsher forecast and assumed that further deterioration in credit would follow. That approach would result in minimal increases in the allowance for loan losses in 2021 and 2022, and accordingly, considerably lower provisions for loan losses than would have been recorded under the current reserve methodology.

If the cycle bottoms several years after CECL's adoption and banks focus on the warning signs on the horizon, the new accounting provision could help banks pull forward losses. But the devil will be in the details from one institution to the next. Banks operating in strong markets that boast pristine credit quality today might struggle to support an outlook that results in a large enough upfront reserve build to stand against future losses.

Already a client? Click here for more data and insights from this analysis.