S&P Global Market Intelligence's latest Lithium and Cobalt September 2022 Commodity Briefing Service forecast a lithium supply deficit starting as early as 2024 due to sustained demand growth and a lack of producing mines. Even if the 53 lithium-producing projects currently in the post-preliminary economic assessment, or PEA, pipeline are developed aggressively, the market will reach a deficit of 605,000 tonnes of lithium carbonate equivalent, or LCE, by 2030.

* Assuming aggressive development of all 53 lithium projects currently in the pipeline, there will still be a demand gap by 2029, requiring $37.8 billion of capital investment to meet a deficit of 605,000 tonnes of LCE in 2030.

* Argentina, the U.S. and Canada host more than half of the projects in the post-PEA pipeline. The weighted-average capital intensity of these 53 projects is $17,353 per tonne of LCE production per year.

* Lithium carbonate and hydroxide projects are five times more capital-intensive than concentrate projects but still remain attractive due to the higher cash margins achieved when in production.

Estimated capital costs of the 53 projects range from $64 million to $1.97 billion, and they are projected to produce a total of 42.4 million tonnes of LCE over their mine lives, giving an average capital intensity of $17,353/t/y of LCE. This implies approximately $10.5 billion of investment to make up the deficit by 2030 and $27.3 billion of capital to develop the 53 projects.

Of the 53 projects in the pipeline, Argentina, which is experiencing a boom in mining investment, leads with 14 projects, all of which are lithium brines concentrated within the Lithium Triangle. North America is next, with nine projects in the U.S. and seven in Canada. Currently, at least 11 lithium-producing projects are set to start production by 2024, and 42 are projected to start by 2030. 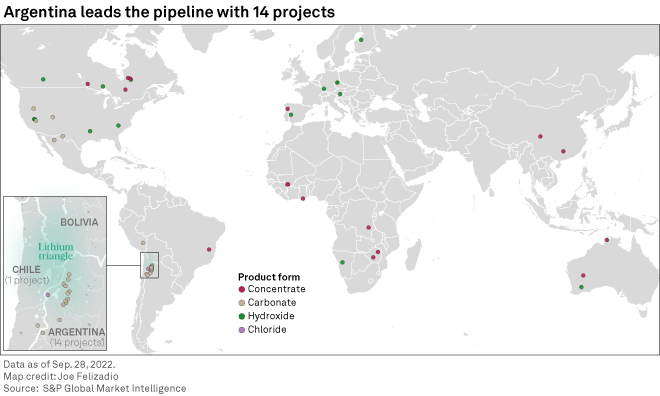 Lithium capital intensity is calculated by dividing the initial capital cost by the projected annual LCE production. This enables investors to compare the development costs of projects regardless of varying production rates. Projects planning additional processing facilities for byproduct production are expected to have higher capital intensity but more revenue streams. 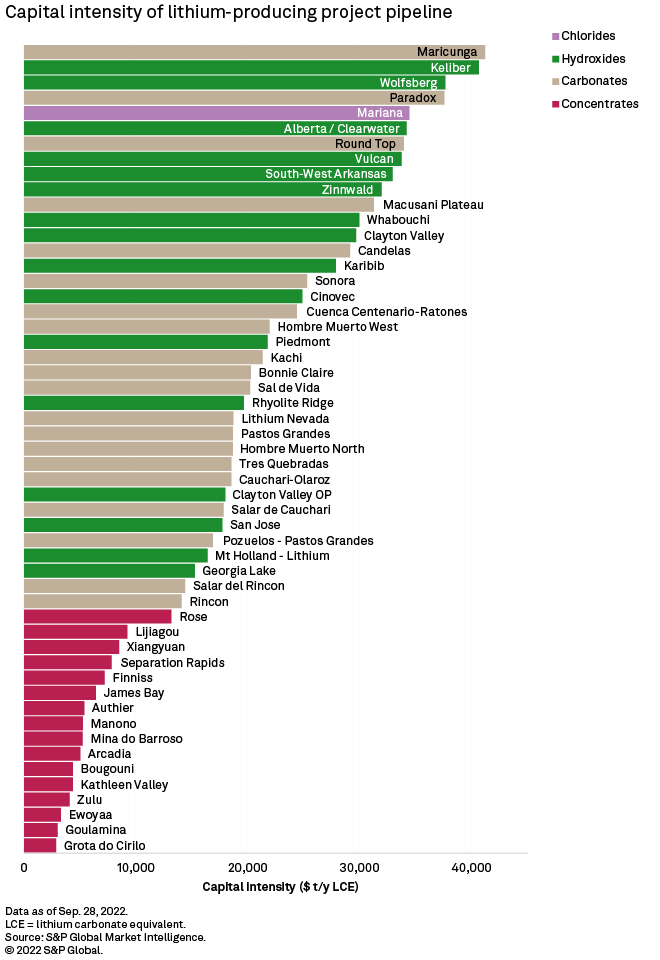 The 16 concentrate-producing hard-rock mines are the least capital-intensive. Of all the lithium product forms, excluding direct shipping ore lithium concentrates such as spodumene, petalite and lepidolite require the least processing facilities and the smallest capital cost, as they are usually obtained with just dense media separation or froth flotation. Sigma Lithium Corp.'s Grota do Cirilo project in Brazil, set to start phase 1 commissioning in the March 2023 quarter, will produce up to 562,000 t/y of spodumene concentrate at 5.2% Li2O through dense media separation, should the company's plan to mine both the Xuxa and Barreiro deposits proceed. Liontown Resources Ltd.'s Kathleen Valley project in Australia is the fifth least capital-intensive project and will produce 608,000 t/y of spodumene concentrate at 6% Li2O (commonly referred to as SC6) through flotation, starting in 2024.

Most Argentine projects are in the middle of the list since conventional brine extraction requires additional capital for extraction wells, solar evaporation ponds and a lithium carbonate plant. The initially least capital-intensive brine project based on its original production capacity, Lithium Americas Corp.'s and Ganfeng Lithium Group Co. Ltd.'s Cauchari-Olaroz in Jujuy, increased its projected expenditure from $641 million to $741 million in March due to additional workings and inflationary pressures. Set to start production later this year, the project's capital intensity is now $18,525/t/y of LCE, similar to that of Tres Quebradas in Catamarca at $18,528/t/y, which will start a 50-year conventional brine operation in 2024 at an estimated capital cost of $371 million. Direct lithium extraction, or DLE, technologies are being evaluated on other projects, such as Lithium South Development Corp.'s Hombre Muerto North in Salta. DLE has minimal surface impact and allows conversion from brine to lithium carbonate within days, compared with months-long solar evaporation before plant processing.

Six of the 10 most cost-intensive projects are lithium hydroxide producers, as this product requires further processing — usually after production of a crude intermediate form of lithium carbonate/sulfate/chloride. Vulcan Energy Resources Ltd.'s combined geothermal energy and lithium brine project in Germany will produce lithium chloride solution through direct lithium extraction before converting it to lithium hydroxide monohydrate, or LHM, at the company's central lithium plant, with a capacity of 39,400 t/y of LHM. E3 Lithium Ltd.'s Alberta project in Canada is developing its pilot plant, which is designed to produce 20,000 t/y of LHM through electrolysis of ultra-pure brine obtained from DLE via ion exchange during the commercial phase.

Lepidico Ltd.'s Karibib hard-rock lithium project in Namibia, expected to start phase 1 construction in 2022, will produce LHM by converting intermediate lithium sulfate liquor through the company's proprietary two-stage conversion, producing five byproducts along the way. The project will allocate 72%, or $112 million, of the initial capital cost for the concentrator ($26.8 million) and 5,600-t/y LiOH plant ($85.1 million). According to a 2017 report, Schlumberger Ltd.'s Clayton Valley brine project in the U.S. has an estimated budget of $26.7 million for an 11,500-t/y of LHM plant, in conjunction with a $64.6 million lithium sulfate plant. The report allocates about 34% of the capital to processing facilities. There is a low correlation between hydroxide plant capacity and processing facility capital costs, as hydroxide projects are adopting various technologies and processes. 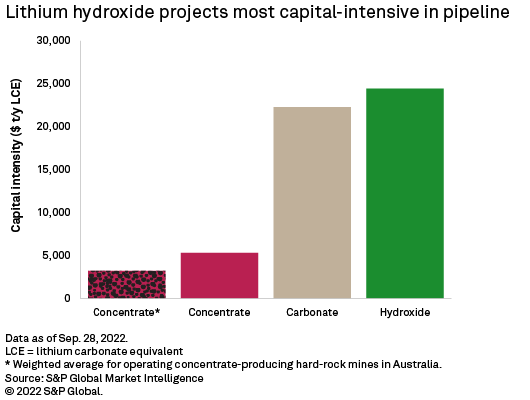 In terms of weighted averages across product types, hydroxide projects are the most capital-intensive at $24,418/t/y of LCE — roughly 4.6 times higher than concentrate producers. Carbonate projects, mostly brine, follow closely at $22,282/t/y of LCE. Altura, Bald Hill, Mt Cattlin and Pilgangoora — all operating concentrate-producing hard-rock mines in Australia — have a weighted actual capital intensity average of $3,194/t/y of LCE — lower than concentrate-producing projects in the pipeline at $5,288/t/y of LCE, which will likely further increase since those four operating mines have deviated up to 59% from their projected initial capital costs. Actual capital intensity is calculated by dividing actual development costs by the projected LCE production rate announced in technical reports and presentations at the start of construction or commercial production. 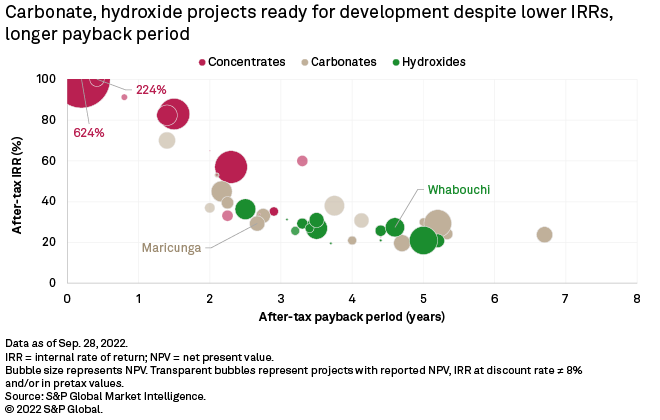 In terms of economic analyses of these projects, lithium carbonate and hydroxide projects are set for development, despite lower internal rates of return, or IRR, and longer payback periods compared with concentrate projects. The most capital-intensive project, Lithium Power International Ltd.'s and Minera Salar Blanco SpA's Maricunga in Chile has a capital intensity of $41,209/t/y of LCE; however, it expects to recuperate its capital in 2.7 years, with an after-tax net present value of $1.4 billion and an IRR of 29.3%. Investissement Québec's Whabouchi project in Canada is due for a construction decision in the December quarter, with a 2019 Technical Report after-tax IRR of 27.4% and a payback period of 4.6 years. These values are expected to have improved with current market conditions, with lithium hydroxide prices significantly increasing since 2019. 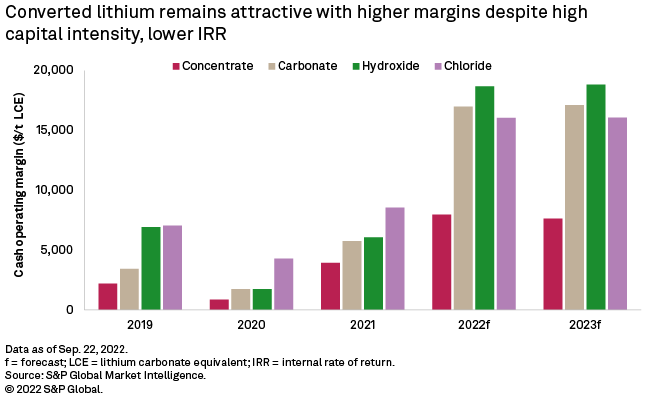 Despite higher capital intensities, lower IRRs and longer payback periods, lithium converters consistently realize significantly higher margins than concentrate producers. Margins for converted lithium are expected to be roughly twice those of concentrate producers for 2022 and 2023. This gives investors some assurance that even if market conditions degrade, lithium converters will have more space to adjust their operations compared with concentrate producers. A 2021 research report showed that adding a hydroxide plant to concentrate-producing operations will raise cash flow and margins significantly higher after 5.3 years. By contrast, lithium carbonate producers, mostly of brines, will see only slightly increased cash flow from year nine onwards.