This report is the second of five global mobile reports posted during Kagan's Mobile Week 2020.

Wider 4G network coverage, higher data consumption and more value-added service offerings increased the aggregate service revenue of the 47 global mobile markets we cover by 1.9% in 2019. Mobile subscriptions, on the other hand, grew faster at 3.4%, resulting in a slight decrease in average revenue per user of 0.6%.

Click here (only for clients) to see the full report and detailed data in Excel format.

Across these 47 markets, the U.S. topped our list in terms of service revenue, followed by mainland China and Japan.

Japan and the U.S. have well-developed value-added service, or VAS, offerings that provide additional revenue streams to carriers on top of SMS, voice and data. Income per capita is high for both advanced markets, giving carriers leverage to charge more.

Mainland China and India do not share the usual characteristics of advanced markets such as postpaid dominance, high 4G penetration and high ARPU. The reason for their massive service revenues is the sheer volume of their mobile subscriptions. Regulators in both markets have ongoing campaigns to bring mobile connectivity to rural areas, which means their service revenues may continue to increase as more people develop an appetite for data-intensive mobile offerings.

North America had the highest region-level ARPU, pulled up by Canada's high ARPU, which is also the highest among the 47 markets in our list.

Large variances between the markets with the highest and lowest market-level ARPUs per region are observable in Europe, Asia-Pacific and Middle East. These markets have a clear divide between developed and emerging markets, which translates to divergent spending habits on mobile services. Developed markets have higher 4G and postpaid penetration while emerging markets are prepaid-dominant.

To measure the affordability of goods and services, we used disposable income per capita as a proxy metric because it indicates the money the average person has full discretion to spend. We adjusted the values for purchasing-power parity for better cross-market comparison. Comparing this metric with ARPU reveals a positive correlation: markets with higher disposable income per capita have higher mobile ARPUs.

Norway and the U.S. had roughly similar real disposable income per capita, but Norway's ARPU was more than the U.S.'s. The U.S. was also a bit of an anomaly due to its large base of connected devices, which pulled down overall ARPU. 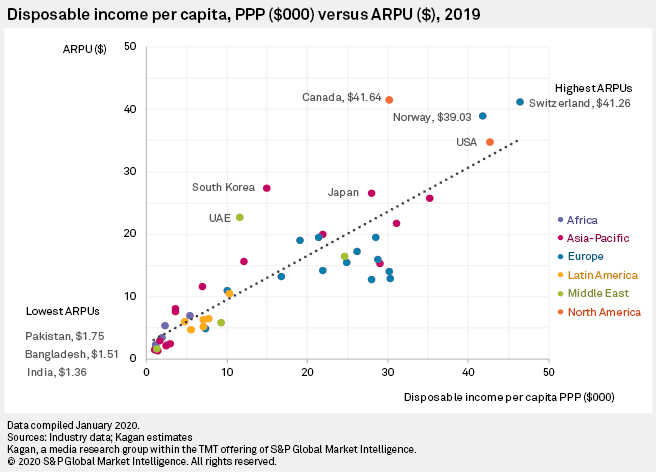