Frequent US movie goers are back, infrequent attendees not so much


Frequent US movie goers are back, infrequent attendees not so much

Comparing the frequency with which U.S. consumers have attended the cinema over multiple years reveals that, based on Kagan’s recent Consumer Insights survey, frequent movie-goers (those attending more than once a month) have returned to the theater after the pandemic, but overall attendance is still down due to fewer infrequent movie-goers.

* Approximately half of internet adults in the U.S. reported attending the cinema over a three-month period, a substantial increase over 2021 totals, but still short of historic trends.

* Currently, 22% of internet adults attend the cinema multiple times per month, mirroring pre-pandemic levels in 2018 and 2019. However, the survey data shows a shortfall in overall cinema attendance due to infrequent movie-goers being hesitant to return to the theater.

* The survey also found that frequent movie-goers use more SVOD and AVOD services but spend the least amount of time watching TV/video content each day compared to infrequent/non-movie goers. 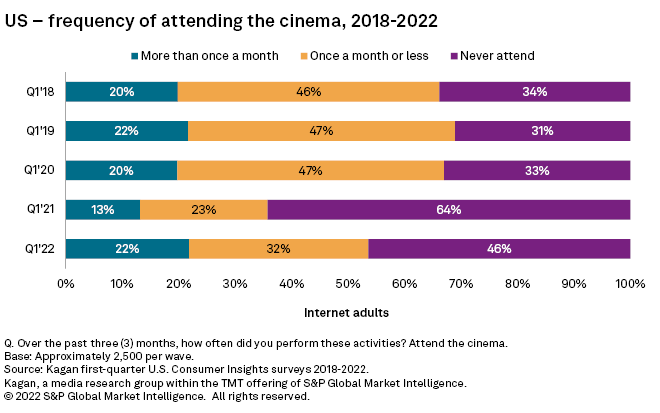 Historical survey data shows that about two-thirds of internet adults in the U.S. have typically attended the cinema. This all changed during 2020 when the COVID-19 pandemic erupted and movie theaters were forced to shutter their doors for extended periods of time. By the end of first-quarter 2021, most movie theaters had reopened, but cinema attendance remained low (36%). Over the subsequent twelve-month period, cinema attendance has continued to rebound, reaching 54% in first-quarter 2022. The pandemic had the opposite effect on online video, with the use of SVOD services, such as Netflix and Amazon Prime Video, expanding seven percentage points during 2020 to 83% in Q1’21 and 84% in early 2022. 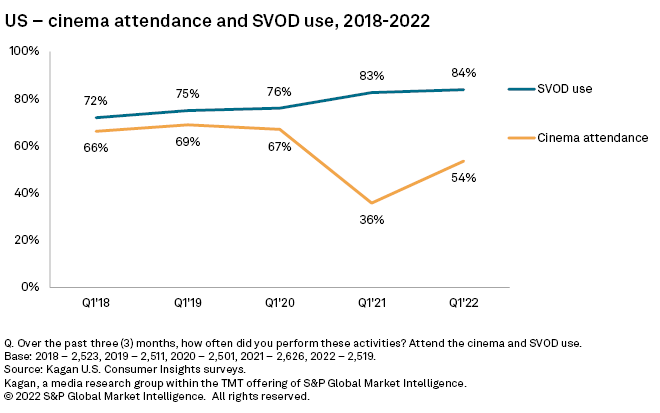 Enticing infrequent movie goers back to the cinema may be a function of both health safety, as well as evolving film release windows. Movie theaters are now competing with some SVOD services that are making new, big-budget releases available exclusively on their streaming platforms, such as "Turning Red" on Disney+. Films with traditional theatrical debuts are also often moving to streaming platforms more rapidly than they did in the past. Infrequent movie-goers also tend to subscribe to major SVOD services and are prone to spending much more time watching TV at home than frequent movie-goers. 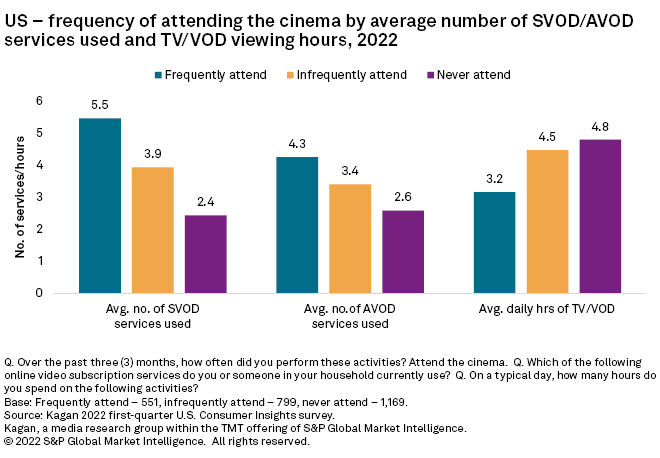 The survey data shows that young adults (Gen Z and millennials) have traditionally constituted about half of those attending the cinema frequently. Since the pandemic, young adults represent nearly three-quarters of frequent movie goers. Older adults may still have health safety concerns, but the movies being released, such as superhero films, may also be targeted primarily at young adults. 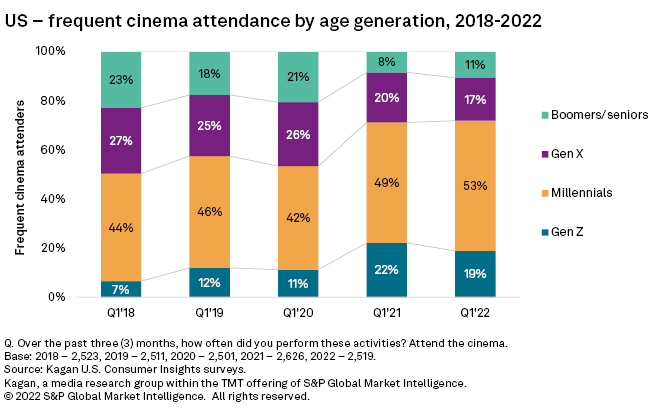 Infrequent movie goers tend to come in all ages. The historic survey data shows that there is a fairly even age distribution, with young Gen Z and millennials constituting around 40%, while the remaining 60% is split between Gen X and Baby boomer/senior adults. Each age group will have different content interests. In 2021 about 400 movies were released in the U.S., half the amount released in 2019. With fewer movies being released in the theater, finding titles that will attract adults ages 40 and above may be a substantial challenge. 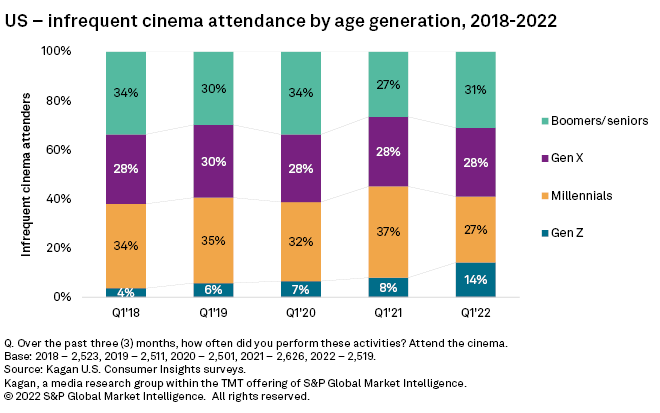 Data presented in this article was collected from Kagan’s Q1’22 U.S. Consumer Insights survey conducted in March 2022. The survey totaled 2,519 internet adults with a margin of error of +/- 1.9 percentage points at the 95% confidence level. Percentages are rounded to the nearest whole number. Gen Z adults are ages 18-24, millennials are aqes 25-41, Gen X are ages 42-56 and baby boomers/seniors are adults aged 57+.