The onset of COVID-19 has significantly impacted the near-term growth prospects of a wide range of insurance companies and the industry as a whole, but fallout from the pandemic is not the lone source of headwinds for recently high-flying companies.

For the second consecutive time, one of the entities ranked by S&P Global Market Intelligence among the fastest-growing U.S. property and casualty or life and health insurers curtailed sales at the behest of regulators before the end of the calendar year in which it had recorded its outsized expansion.

Just months after American Transportation Group Insurance Risk Retention Group Inc. completed a year in which it grew direct and net premiums written by 307.1% and 276.8%, respectively, the company has been placed into administrative supervision and warned in a regulatory filing that substantial doubt exists about its ability to continue as a going concern. The North Carolina-domiciled commercial auto insurer's expansion ranked fifth- and sixth-highest in 2019 among combined and standalone P&C entities that met criteria established by S&P Global Market Intelligence. It subsequently alleged in a lawsuit, however, that at least some portion of the rapid expansion came as part of a fraudulent scheme by its former managing general agent to write as much business as possible without regard for regulatory limitations.

A year earlier, S&P Global Market Intelligence ranked Global Bankers Insurance Group LLC as the U.S. life industry's fastest-growing entity despite internal and external actions involving certain of its members that had the effect of limiting sales prior to the end of 2018. The group's members were later placed into rehabilitation by regulators in North Carolina and Michigan.

Among life and health companies, annuity writers ranked as the fastest-growing entities as measured by both total direct premiums and annuity considerations and direct first-year and single-premium business. Texas Republic Life Insurance Co., Independent Life Insurance Co. and the SILAC Inc. group ranked among the top three on both bases, limited to those groups and top-tier entities meeting various criteria established by S&P Global Market Intelligence to include measures of business production and retention.

A virtually overnight transition from fast growth to financial distress like American Transportation Group Insurance experienced is not typical, but 2020 has presented unique challenges to the industry. A review of first-quarter direct premiums written growth rates for the fastest-growing insurers from 2019 finds a wide range of outcomes, from continued expansion to dramatic retrenchment. Growth rates for the period among the 10 fastest-growing P&C companies came in anywhere from a decline of 100%, reflecting American Transportation Group Insurance's cessation of writing new or renewal business, to an increase of 269%. For the 10-fastest-growing life entities, the range was from contraction of 89.3% to expansion of 271.6%.

Ultra-low interest rates, surging levels of unemployment, and logistical challenges in sales and underwriting associated with stay-at-home restrictions have presented previously unforeseen risks to business plans, and some companies are better positioned than others to maintain their momentum.

The three fastest-growing P&C companies by 2019 direct premiums written were entities that began operating in their current form in 2018. 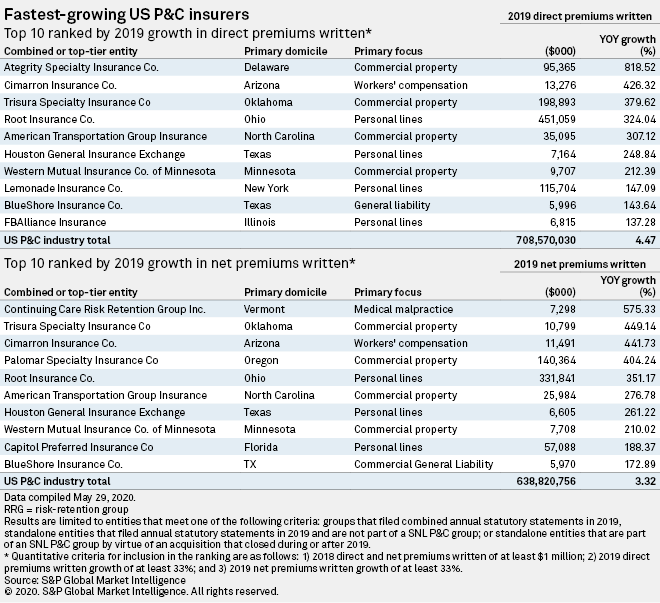 Ategrity Specialty Insurance Co. was licensed in 2018 and offers a range of commercial general liability and property coverages on an excess-and-surplus lines basis for targeted classes that include lodging, artisan contractors, churches, office buildings, grocery stores, apartments and restaurants. Cimarron Insurance Co. Inc., formerly ProSelect National Insurance Co., was recapitalized and relaunched with a focus on workers' compensation coverage in 2018 after being sold as essentially a clean shell. Trisura Specialty Insurance Co., a surplus lines company that began binding business in early 2018, focuses on partnering with a core basis of established program administrators and ceding much of the associated risk to highly rated international reinsurers.

Two high-profile insurtech companies ranked among the 10 fastest-growing P&C companies by direct premiums written. Both Root Insurance Co. and Lemonade Insurance Co. cited geographic expansion as a driver of their 2019 growth of 324% and 147.1%, respectively. Direct premiums written equaled or exceeded $1 million at Root in 27 states in 2019, up from 17 in 2018. The number of states in which Lemonade accomplished that feat in 2019 doubled to 16.

Reinsurance-related changes led two carriers to ascend the ranks of the fastest-growing P&C insurers by net premiums written. Continuing Care Risk Retention Group Inc.'s 575.3% growth in that measure greatly exceeded its 68.7% expansion in direct volume. This reflected the impact of a true-up in ceded premiums in 2018. Palomar Specialty Insurance Co.'s 404.2% growth in net premiums written vastly exceeded its 52.2% expansion in direct business as the company on July 1, 2019, suspended a quota-share agreement through which 35% of its net earthquake premium had been ceded to a Bermuda affiliate.

The annuity business of Texas Republic Life, the fastest-growing U.S. life insurer on the basis of total direct premiums and considerations, expanded at such a rapid clip that its "sales significantly outpaced our ability to secure quality investments," according to the 2019 Form 10-K for parent Texas Republic Capital Corp. 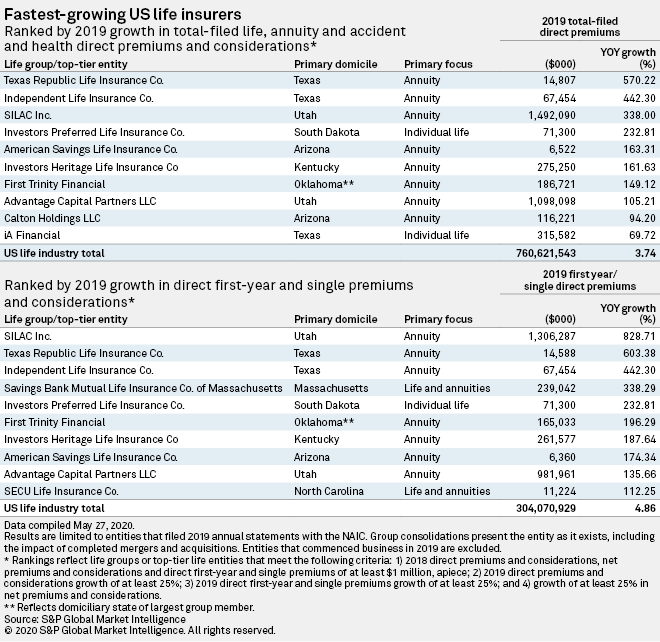 The company offers single-premium deferred annuities as well as certain whole life and universal life products. Its direct first-year and single premiums and considerations of $14.6 million in 2019 marked an increase of 603.4% from 2018 levels. With single-premium annuities accounting for the overwhelming majority of its business, Texas Republic Life's total direct premiums and considerations surged by 570.2%. On the basis of first-year and single premiums, a measure of new business production, only the SILAC group produced a larger increase at 828.7%.

Other annuity providers that ranked among the 10 fastest-growing life insurers also benefited from recent product releases. Investors Heritage Life Insurance Co. launched a single-premium multiyear guaranteed annuity in late 2018 that produced significant growth in 2019. Sentinel Security Life Insurance Co. helped drive growth at the Advantage Capital Partners LLC group through its 2018 rollout of fixed and fixed indexed annuities. The company, which has been diversifying from its previous focus on final expense life insurance, also increased the crediting rate on its multiyear guaranteed annuity product in 2018, fueling 2019 expansion. Savings Bank Mutual Life Insurance Co. of Massachusetts attributed its rapid growth in 2019 to the success of an annuity product it developed in conjunction with a broker.

Independent Life Insurance Co., which ranked No. 3 in terms of growth in first-year and single premiums and No. 2 in total direct premiums, generated significant volume of fixed, single-premium structured annuities during its first full year of operation.

A variety of challenges related to the pandemic could impact volumes in the structured settlement market beginning in the second quarter of 2020, Independent Life cautioned, citing delays in mediations and court dates. The company continues to expect an increase in its annuity considerations of between 25% and 40% in full year 2020 as activity picks up later in the summer, but that would be well short of the 442.3% and 271.6% expansions it experienced in 2019 and the first quarter of 2020.

Texas Republic Life took action to slow its production in late 2019 and early 2020 as it dropped its annuity crediting rates. Still, the company's direct premiums rose by 78.2% in the first quarter. At the other end of the spectrum, Investors Heritage, First Trinity Financial Corp. and American Savings Life Insurance Co., which ranked among the 10 fastest-growing life insurers in 2019, reported year-over-year declines in their first quarter direct premiums of well into the double digits, but did not discuss reasons for the drops in their quarterly statements.