Newly released 2020 global exploration budget data from S&P Global Market Intelligence's Corporate Exploration Strategies, or CES, series shows that exploration sector optimism that began to appear in the second half of 2019 was snuffed out by the COVID-19 pandemic, resulting in a second year of decreasing budgets in 2020. Preliminary analysis of budgets gathered for 2020 exploration shows that our estimate of the total annual global nonferrous exploration budget has fallen 11% year over year to $8.7 billion from $9.8 billion in 2019.

Our survey of 2,500 public and private companies in 2020 has resulted in the global aggregate nonferrous budget decreasing 10% year over year to US$8.3 billion. Incorporating an assessment of budgets by companies spending less than US$100,000 and those entities with limited visibility has increased the total nonferrous metals exploration budget for 2020 to $8.7 billion — $1.1 billion less than in 2019. 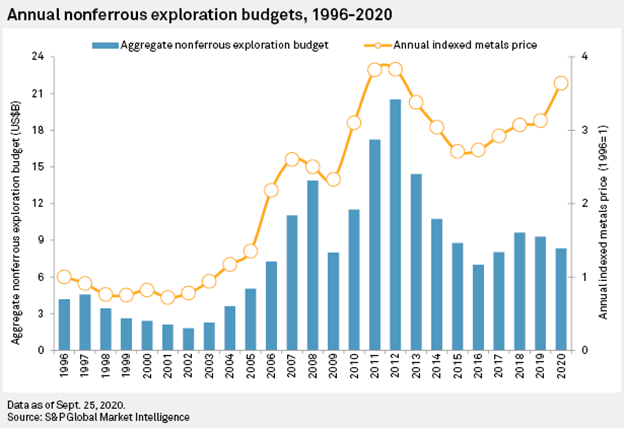 Exploration budgets decreased modestly in 2019, due to poor price performance by most metals early in the year and a slowdown in financing activity. As the year advanced, precious metals prices moved upwards and base metals prices stabilized. Market activity also picked up, with financing levels ending the year well above 2018 levels. Yet optimism for a return to increasing exploration was stymied in early 2020 with the global spread of COVID-19. Mobilizing exploration teams became difficult as lockdowns hit Asia in the March quarter and then spread to most other nations. The shuttering of many major economies resulted in severe demand destruction, which sent base metals prices lower until late March; and uncertainty hit global markets, causing a decline in financings into the June quarter.

Fortunately, the mining industry recovered quickly from the initial shock. Base metals prices trended upward during the June and September quarters, and financings returned to pre-pandemic levels. On the ground, mining was declared an essential industry in most countries, so shutdowns were relatively short-lived. Exploration programs resumed, although difficulty remained with large district programs crossing state or provincial boundaries, or near first nations. Through all of this, gold went on a bull run, spending several months above $1,900 per ounce, although it has since pulled back somewhat. All of these factors have contributed to the 2020 exploration budget decrease being far less steep than anticipated at the end of the March quarter.

Despite the challenges 2020 has brought, there are some positive signs. The number of active companies with exploration budgets has increased again, up 3% to 1,762 from 1,708 in 2019, as dormant companies reactivated themselves in late 2019 before conditions deteriorated. Gold allocations have also increased, to $4.3 billion despite the difficult field season earlier in the year.

As the end of 2020 nears, we are cautiously optimistic on our outlook for 2021 budgets. Equity market support for explorers is trending above 2019 levels, and prices for copper and gold (the two largest targets for exploration) are well above where they started the year; both provide support for improved exploration budgets over the coming year.

Major companies account for the largest share of the global budget for the ninth consecutive year, followed in order by juniors, intermediates and government and other company types. Companies of all types have decreased their allocations this year, leaving their global budget shares almost completely flat year over year. 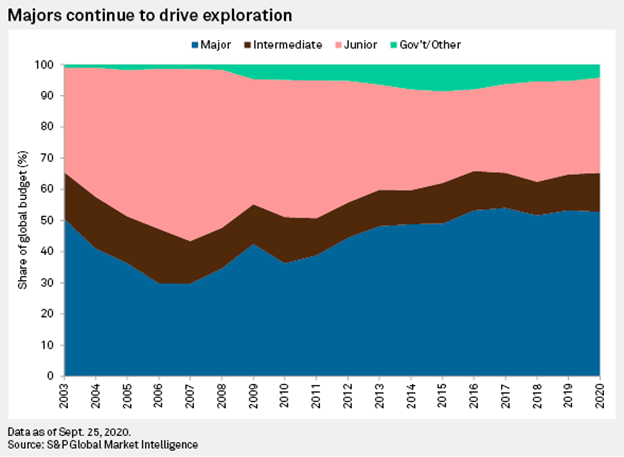 Since the CES studies began in the 1990s, there has been a notable shift away from earlier stages of exploration towards work at existing mine sites. While there is variability from year to year, the global allocations directed to minesite exploration have increased from less than 20% in the late 1990s to over 30% since 2014. This year, pandemic restrictions have had a disproportionate impact on the earlier stages of exploration. Regional lockdowns made large-scale grassroots efforts more difficult, especially where they cross state or provincial boundaries. As a result, grassroots budgets have decreased to just over $2 billion; late-stage exploration is down to $2.90 billion; and minesite exploration decreased to US$3.43 billion.