Two-thirds of internet adults in China use the iQiyi and Tencent Video services to watch online video, according to the Kagan 2022 China Consumer Insights survey. However, the survey also revealed that online video remains supplemental to live (linear) TV programming for most internet adults.

* Nine out of 10 internet adults watch online video; iQiyi and Tencent Video are the most popular subscription video-on-demand services.

* TV series programming and short-form video are the most popular types of video content viewed on smartphones. Over half of internet adults said they spend more time in front of the big-screen TV watching live (linear) TV than any other type of video content.

Results from the Kagan 2022 China Consumer Insights survey, completed in June 2022, show that 92% of internet adults watch paid or free online video. Over two-thirds (68%) of internet adults said they use iQiyi, owned by online search engine giant Baidu, followed closely by 66% using Tencent Video. Douyin, the Chinese version of TikTok, is also extremely popular with six out of 10 (61%) internet adults using the service. Bilibili is a video-sharing website, and Youku is an online video service owned by e-commerce giant Alibaba. Mango TV is an online video service operated by the Hunan Broadcasting System. 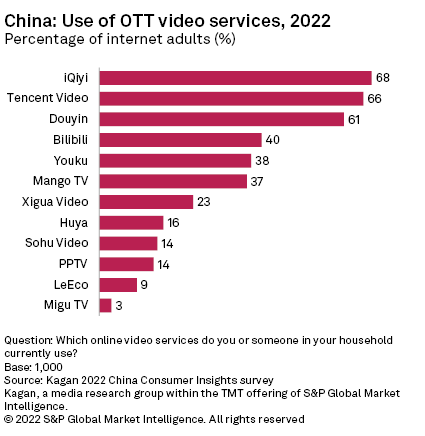 Historical survey data depicts strong user growth for iQiyi, Tencent Video and Bilibili between 2019 and 2021. IQiyi and Tencent Video use peaked in 2021 at 73% and 69%, respectively. The use of Bilibili grew a whopping 20 percentage points over the same time period, matching that of Youku at 42% in 2021. All four online video services saw a modest decline in usage in 2022. 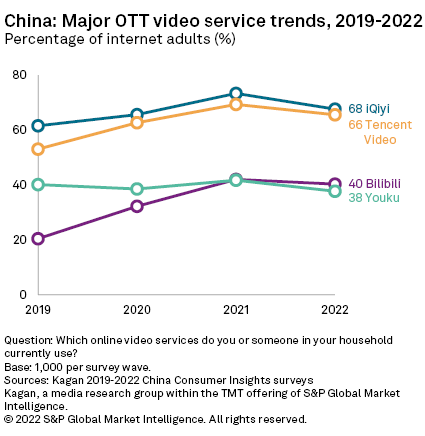 Overall use of digital entertainment in China has followed the same pattern as that of the major over-the-top video services, exhibiting strong growth from 2019-2021, followed by a slight decline in 2022. On average, internet adults in China spend over five hours each day on digital entertainment, which includes over two hours per day watching TV/video content. Internet adults also report spending another 1.5 hours per day, on average, listening to music, as well as playing video games. The 2022 survey found that 82% of internet adults play mobile video games, 78% play online/console games and 63% listen to online music. 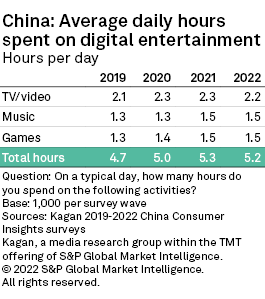 Over the past four years, the percentage of internet adults subscribing to a multichannel TV service has declined 10 percentage points to 69% in 2022. However, this decline is predominantly from an increase in the number of young adults choosing not to subscribe (video cord nevers) rather than those dropping their pay TV subscription (video cord cutters). 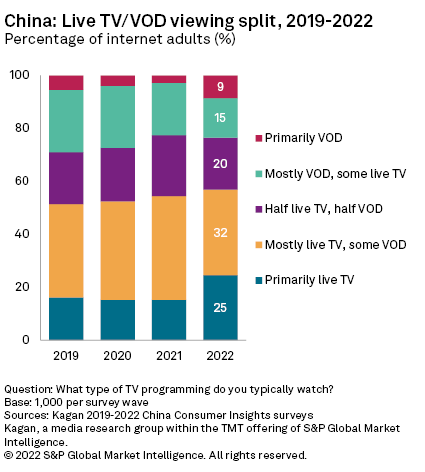 Six in 10 smartphone users (59%) reported watching TV series programs on the device over the past 30 days. Approximately half of smartphone owners said they have used their mobile devices to watch user-generated video posts (50%) and professional short-form videos (49%). Somewhat surprisingly, 48% indicated they have watched a full-length movie on their smartphone over the past month. 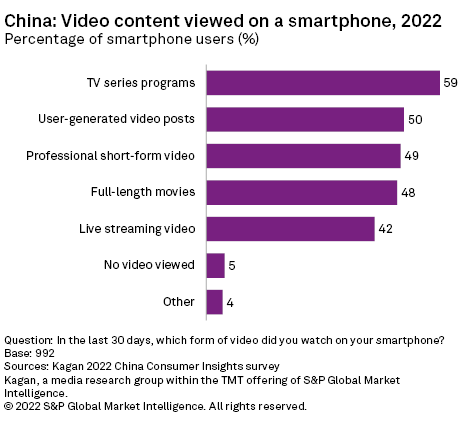 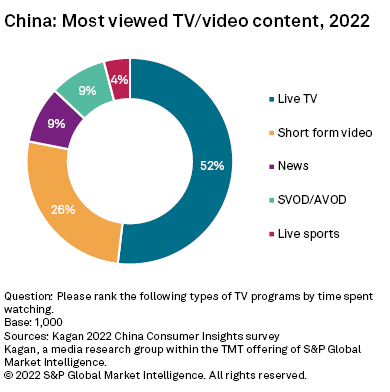 The 2022 Kagan China Consumer Insights survey, conducted in June 2022, consisted of 1,000 adults. The survey has a margin of error of +/-3 percentage points at the 95% confidence level. Percentages are rounded up to the nearest whole number.