Click here to access the full report, including the summary PowerPoint presentation and Excel spreadsheet (for clients only).

China was the first country to be hit by the COVID-19 pandemic. The first cases were traced to the city of Wuhan, in Hubei province, in late December 2019, and the disease quickly spread through China as people traveled to their hometowns ahead of the Chinese New Year holidays in January 2020.

Lasting for more than two weeks, the Chinese New Year season is usually the busiest time of the year in China, but most festivities for this year were canceled due to the pandemic. China Central Television's New Year's Gala, the most-watched TV program in terms of live viewers, remained in broadcast on Jan. 24 and attracted 1.23 billion viewers, up by 59 million from the previous year. 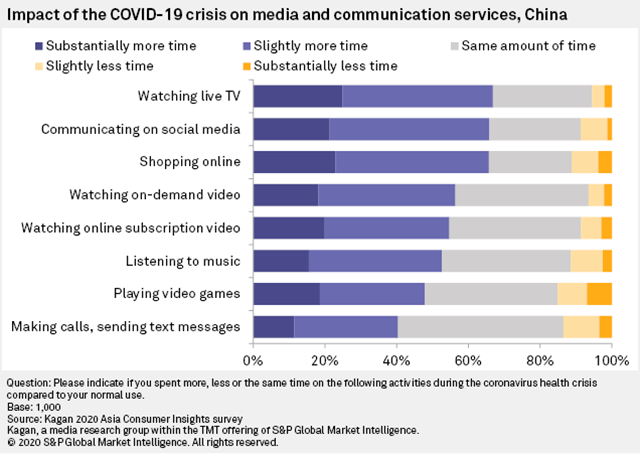 Baidu Inc.'s iQiyi, Tencent's Tencent Video and Alibaba Group Holding Ltd.'s Youku Tudou were the most popular OTT video platforms in our survey. These OTT video platforms were able to increase usage during the height of the pandemic by hosting popular live TV programs, making some on-demand TV programs available for free and hosting the launch of movies originally scheduled to be released in cinemas for the Chinese New Year holidays.

Survey results, however, revealed that smaller OTT players were the biggest winners in China's media landscape due to the pandemic. We asked adult internet users in China when they started using various OTT video platforms, and smaller players had a higher proportion of new users during and after coronavirus-related restrictions compared to more established OTT players like iQiyi, Tencent Video and Youku Tudou. UUSee had the largest share of users who started using it during lockdowns, while 56.com had the highest proportion of users who began using it after lockdowns.

For reference, the Chinese government imposed lockdowns on Wuhan and other cities in China on January 23. Lockdowns outside of Wuhan were lifted on March 25, whereas restrictions in Wuhan remained until April 8. The lockdowns, for the longest part, lasted more than two months and affected roughly half a billion people.

After a second wave of infections, Jilin and other cities in northeast China plunged back to partial lockdowns on May 13, affecting about 108 million people. This was the last wave of lockdowns before we fielded the survey in June.

The COVID-19 crisis had a significant impact on social media use in China, with 66% of adult internet users saying they spent more time on social media during the crisis. Tencent's WeChat emerged as the most popular social media platform, followed by Tencent QQ (which is also owned by Tencent) and SINA Corp.'s Sina Weibo, China's largest microblogging platform. Sina Weibo benefited from the spillover of discussions from millions of people who watched CCTV's New Year's Gala and the Wuhan field hospital livestreams.

On the contrary, the crisis had little impact on traditional modes of personal communication. 46% of respondents said they spent the same amount of time making calls and sending text messages during the crisis, while 55% reported no change in the amount of time they spent sending emails.

Online shopping was another activity that got a significant boost from the pandemic. As stores were shut down and people were confined to their homes, online shopping and delivery became the most popular and safest ways to obtain physical goods. 66% of people we surveyed said that they spent more time shopping online during the COVID-19 crisis.

We tracked which e-commerce platforms were most popular among adult internet users in China, and four emerged at the top: Alibaba's Taobao and Tmall, JD.com Inc.'s Jingdong Mall, and Pinduoduo Inc.'s Pinduoduo. Alibaba and JD used their expertise in new technologies such as 5G, artificial intelligence and robotics to create innovative product delivery solutions that are apt for the health crisis, such as driverless delivery vehicles and delivery drones.

Chinese adult internet users were able to seamlessly shift their spending online because of their mature digital payments ecosystem. Similar to results that we got last year, WeChat Pay and Alipay dominate China's digital payment landscape. These digital payment platforms are essentially mobile platforms, which is why smartphone owners reported the highest activity for online shopping among various device types in our survey. Focusing only on smartphone owners, 68% said that they used their smartphones for online shopping in the past three months, which was a big jump from just 55% in 2018. In fact, the proportion of smartphone owners who did not do any finance-related activity on their smartphones dropped from 11% in 2018 to just 4% in 2020.

In an earlier article, we discussed how mobile operators China Mobile Ltd., China Unicom (Hong Kong) Ltd. and China Telecom Corp. Ltd. used 5G to deliver innovative solutions to help fight COVID-19, such as thermal-imaging scanners and disinfecting robots. The success of these solutions in controlling the pandemic spurred great interest in 5G and related technologies.

93% of wired internet users expressed interest in replacing their home internet service with wireless 5G, with 31% expressing extreme interest. Among the Internet of Things services that we surveyed, home security systems got the highest net interest rate among all respondents. Driverless or autonomous cars got the least reported ownership among our respondents but net interest remained high.

When asked about concerns regarding IoT, security emerged as the top concern for most. 76% of respondents expressed concerns about their personal data being collected and compromised through IoT connections. Only 3% of respondents believed that IoT will bring no benefit to them.

Data presented in this article was collected from the Kagan 2020 Consumer Insights survey in China. The online survey consisted of 1,000 adult internet users and was completed during second quarter 2020. Data from the survey has a margin of error of +/- 3 ppts at the 95% confidence level. Percentages are rounded up to the nearest whole number.

To submit direct feedback/suggestions on the questions presented here, please use the "feedback" button located above, directly under the title of this article. Note that while all submissions will be reviewed and every attempt will be made to provide pertinent data, Kagan is unable to guarantee inclusion of specific questions in future surveys.