As Market Fault Lines Emerge, Where Could Stranded Costs Develop?


As Market Fault Lines Emerge, Where Could Stranded Costs Develop?

S&P Global Market Intelligence recently highlighted the possibility that stranded costs in the electric sector could emerge again, 20 years after a wholesale restructuring of the industry that was intended to mitigate this type of risk. A recent S&P Global Market Intelligence webinar, Grid Transformation and Stranded Assets: Why They Could Be Back and Bigger Than Ever, delved into historical and future potential stranded costs and related market developments.

This article, the second in a two-part series, examines regional market factors that may lead to future stranded costs.

Demand growth as an underlying risk factor for stranded costs

What are the factors that drive stranded asset risk in the modern era? Often the factors present today are not so different from factors that gave rise to stranded assets in the 1980s and 1990s. Low demand growth, in particular, presents a risk today. Since 2015, Market Intelligence estimates that aggregate annual demand growth projections have been revised downward from 1.0% annually over the next 10 years to 0.6% annually. This means that the market now needs about 35 GW less capacity than it was planning for five years ago.

The main impact of a lack of electricity demand growth is intensified competition between different generating asset classes. This competition has been most intense over the last five years between coal and natural gas generation, but renewable generation is likely to emerge as a competitor for scarce megawatt-hours of demand growth as well. As wind and solar plants add zero-marginal-cost generation to the grid, Market Intelligence estimates they will absorb roughly half of the incremental growth of generation, leaving conventional generation resources such as coal and natural gas to fight over the remaining sliver. The loser of this three-way competition will likely have stranded costs, and it is possible that stranded costs could arise across all three asset classes.

Resource adequacy in restructured and regulated markets — a risk for natural gas assets?

In addition to market share competition between generators, competing policy constructs with regard to resource adequacy may be consequential. The PJM Interconnection put in place an annual capacity auction once it became clear that not enough new generation was being built under its restructured market. The Electric Reliability Council of Texas retained its energy-only market, building an administrative scarcity curve that could be added to hourly prices in order to maintain a price signal for long-term investment. In both markets, the merchant generation sector responded by adding gas-fired generation and shedding coal-fired generation. But while PJM reserve margins remain high by industry standards, ERCOT's reserve margins for the upcoming summer are the lowest in its history, following a 2018 summer when reserve margins were hardly better. If ERCOT is able to manage its market at low reserve margins, it may shape the debate going forward about how much capacity is needed to maintain reserves in a market with greater geographic and resource diversity such as the Eastern Interconnect. 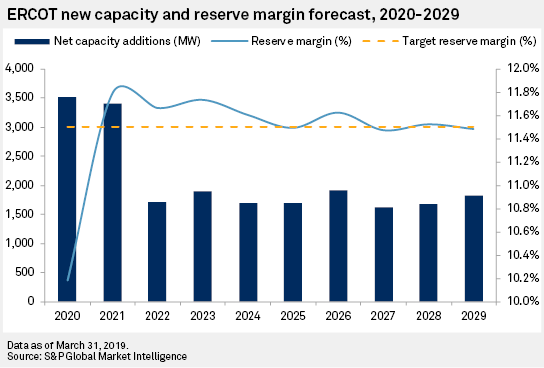 Market Intelligence estimates ERCOT's revised operating reserves demand curve will support a reserve margin between 11.0% and 11.5%, well below PJM's planning target of 16.5%. Even with a target this low, ERCOT will need 10 GW of new capacity, including peak capability from wind or solar, to achieve this target. Of this forecast capacity need, only about 1.6 GW can be met by new gas plants planned to be in service by the summer of 2021. About 6 GW of wind and solar facilities are also under construction, which may provide 2.5 GW of summer peak capacity, leaving a gap of nearly 6 GW to be filled by uncommitted generation, whether conventional or renewable.

By contrast, PJM has more capacity than it needs to meet planning reserve margins. Up until this year, expansion of gas-fired generation has outpaced the retirement of coal and nuclear generation, pushing reserve margins higher. With the pipeline of firm new gas projects declining, Market Intelligence projects that reserve margins will decline over the next 10 years as retirements outpace additions. Still, reserves are likely to remain above targets, especially now that Ohio has moved to subsidize the Perry and Davis-Besse nuclear plants and prevent them from deactivation. 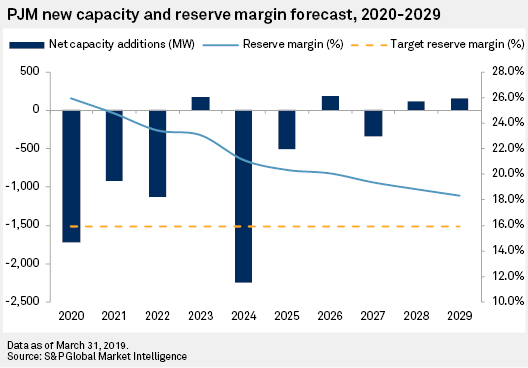 The expansion of natural gas production within the PJM footprint has led to a surge in natural gas generation share, from 12% in 2010 to 28% by 2017. Despite little new added generation after 2019, favorable price trends are projected to push gas generation's share in the PJM market to nearly 45% in 2022-2023. Part of this growth is attributable to announced retirement of nuclear plants in the region. 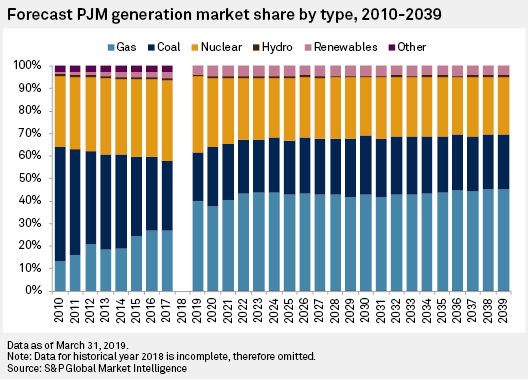 PJM and ERCOT are restructured competitive wholesale markets, but stranded cost risk exists in vertically integrated markets as well. The Southeast Reliability Council, or SERC, region revised its electricity demand growth projection down from 0.8% annually to 0.3% at the end of 2018. This comes at a time when major SERC participant Southern Co. is working to complete the 2,200-MW expansion of the Alvin W. Vogtle Nuclear Plant, already subject to numerous cost overruns and financial distress. The units will nevertheless enter service in 2021-2022, pushing SERC-Southern reserve margins to 35%. Coal plants will likely feel the impact of this surplus capacity, with Market Intelligence estimating that 4.5 GW of coal will become uneconomic. With much of that legacy investment depreciated, the stranded cost risk may actually be small. However, the nearly 3.9 GW of natural gas facilities built within the Southern Co. footprint to replace previously retired coal plants may feel the squeeze as well, and all of this capacity has come online since 2010. Furthermore, new gas pipelines have been built from the Marcellus Shale region to the Southeast to supply these plants, and more are on the way. To the extent utilities have contracted for long-term capacity on these pipelines, that investment too may become stranded if natural gas power generation does not materialize. 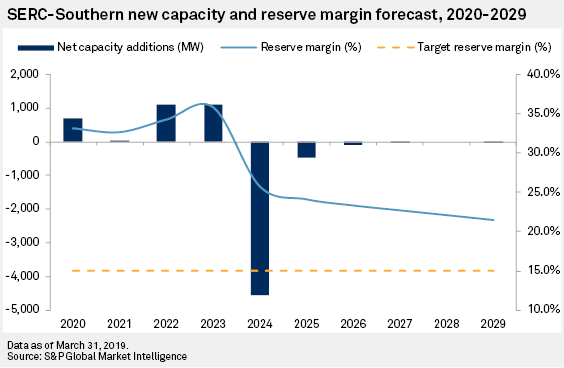 Market Intelligence projects that natural gas will grow to 50% of the SERC generation mix over the next two years. Growth will subsequently slow as the market runs out of coal plants to displace and demand growth remains slow. 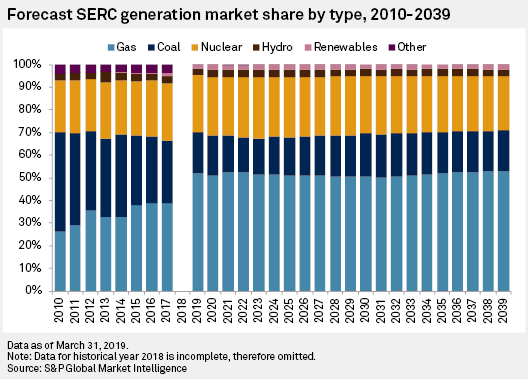 Renewables represent the second emerging asset class where the risk of incurring stranded costs may arise in coming years. Although green energy advocates cite the falling costs and beneficial environmental attributes of this sector, the increasing trend toward higher and longer electricity sales targets via renewable portfolio standards means that new generation may be pushed into the grid faster than is warranted by electricity demand growth. 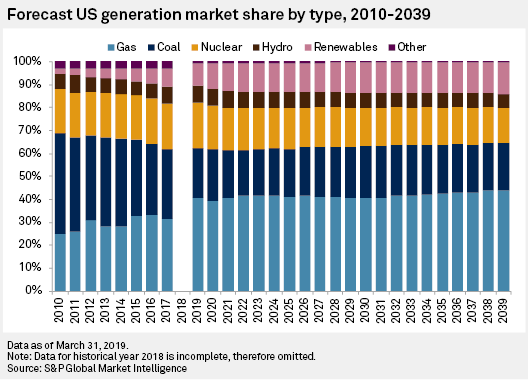 Expansion of renewable electricity does not have to be rapid to have a disruptive effect on wholesale electricity markets. From less than 5% of the generation mix nationally in 2010, Market Intelligence estimates that in 2017, wind and solar combined accounted for 8% of the electric generation mix in the U.S. By 2022, this share is forecast to grow to 12%, increasing more slowly after that as a function of demand growth and state RPS milestones. The share of zero-carbon electricity as a whole, i.e., wind, solar, hydroelectric and nuclear, will constitute 40% of the generation mix by 2022 and will decline slightly after that as nuclear retirements offset RPS-driven green energy build.

Green electricity is expanding most rapidly in the states making up the Western Interconnect as RPS mandates drive significant growth in wind and solar generation. Market Intelligence projects new renewable electricity will make up 35% of total generation by 2039, with zero-carbon hydroelectric and nuclear making up another 25%. 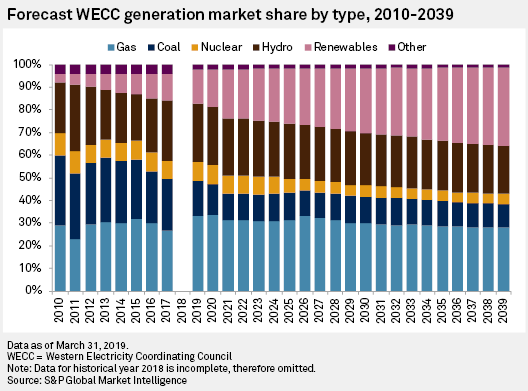 While the growth in green electricity is impressive, it may create stranded cost risks in two possible ways. The first is through the risk of older, above-market power purchase agreements in which continued cost declines and lower current contract prices make older contracts overpriced. This has emerged as an issue in the bankruptcy reorganization of PG&E Corp. and subsidiary Pacific Gas and Electric Co., although no contracts have yet been rejected in that process. Next, renewables could be subject to simple overbuild risk as

Low wholesale prices are already having an effect on conventional generation in the U.S. West. In California, Market Intelligence estimates the market will lose nearly 1,500 MW of gas-fired generation that cannot afford cooling system retrofits over the next two years, and renewable build will only slightly offset that loss. Reserve margins may be tested again when the Diablo Canyon nuclear plant retires in 2024-2025, again before sufficient green capacity can be brought in to offset the lost capacity. California recently indicated it may need new capacity of up to 2,000 MW by 2021. 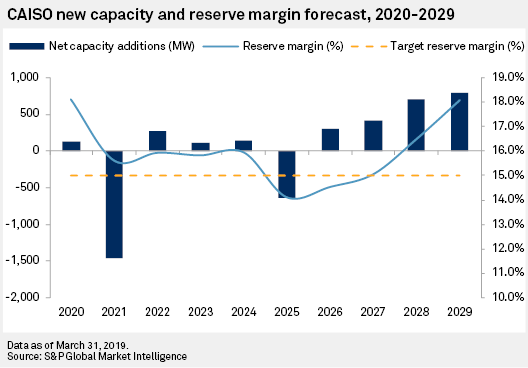 The desert Southwest is in a similar bind, with plans to retire the Navajo Generating Station and San Juan coal plant at the end of 2019 and in 2022, respectively. To maintain adequate reserves, the region will need an estimated 2,200 MW of net new capacity. The pipeline of solar photovoltaic projects is good, but it may be difficult to deploy this much by 2021, and only about 300 MW of new conventional generating capacity is under development. 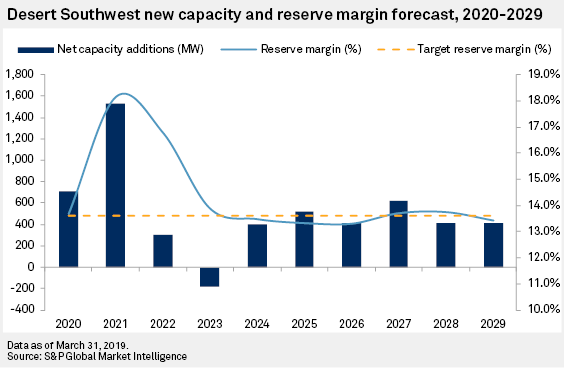 With grid in transition, someone is likely to guess — and invest— wrong

Stranded investment risk tends to increase during transitional periods where large amounts of new investment are taking place. Low demand growth represents an enhancement of risk because it increases the likelihood that new generation investments will exceed market need.

In the eastern U.S., most of the new investment has been focused on natural gas generation and related upstream investments, while in the western U.S., most of the new investment is concentrated in renewable electricity.
Generation shortages appear likely to develop in multiple regions, including ERCOT, CAISO and the desert Southwest. If additional investments are needed to mitigate these shortages, it could call into question current expenditures, driving a public and policy backlash against many forms of new investment, whether in natural gas or renewable generation.

Investors see value in El Paso deal, but will regulators?