A bit of life returns to M&A market in August


A bit of life returns to M&A market in August

Through Aug. 19, the total value of U.S. M&A announced in the month reached $81.32 billion, exceeding both the $45.62 billion recorded in July and the $76.93 billion reached in June. Those numbers exclude a proposed $17.5 billion reverse merger between AppLovin Corp. and Unity Software Inc. Though Unity rejected the AppLovin proposal, any signs of increased activity are welcome in a year where the total value of global M&A announcements in the first half dropped 26.2% year over year to $1.710 trillion, according to S&P Global Market Intelligence's latest M&A and equity offerings white paper. The slowdown in global equity issuance was more dramatic, plummeting 67.3% year over year to $193.74 billion through the first half of the year. Dealmaking in much of 2022 has been plagued by falling equity valuations, surging inflation, rising interest rates and ongoing geopolitical uncertainty.

Current market conditions are taking some major players out of the M&A market. Higher interest rates and lower valuations are turning private equity firms into bystanders. Special purpose acquisition comp previously helped boost M&A and IPO activity. However, momentum from that vehicle has slowed considerably as blank-check companies have faced increased scrutiny while operating in a difficult environment. Despite headwinds, the first half of 2022 saw the announcement of a number of large M&A deals. Corporate executives continue to discuss possible transactions, but absent a significant market swing, sellers need to adjust their expectations before the M&A market sees a meaningful pickup. However, the pipeline of prospective targets is swelling because IPO activity has also been subdued. With lower valuations and increased volatility, equity issuances declined across the globe. 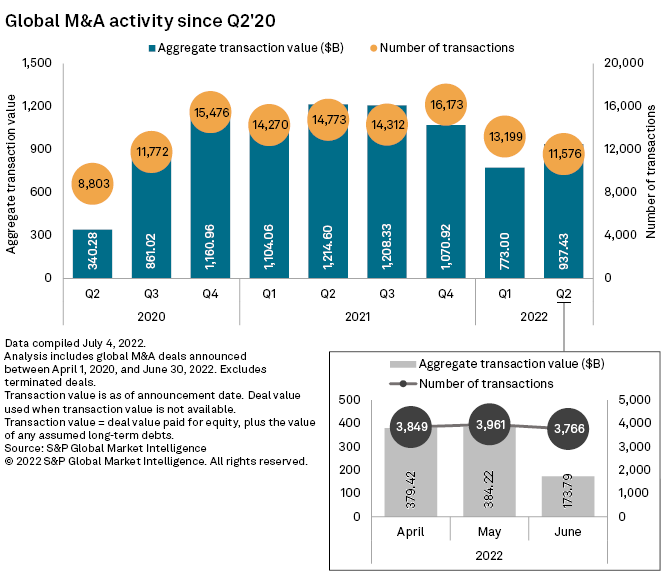 Reduced activity from private equity has been part of the reason for the slowdown in transactions. The cost of financing transactions has increased as the Federal Reserve pursues historic rate hikes to curb inflation, giving financial sponsors reason to pause.

Once some normalcy returns to the market, the terms of the transactions will change as the financing will come with higher interest rates and stricter covenants, Lazard Ltd. Chairman and CEO Kenneth Jacobs said during a July earnings conference call. The deals could see less debt and more equity — structures that will lead to lower internal rates of returns.

"The market at that point will reopen," Jacobs said. "The question is just how quickly that plays through."

The financing environment is not as dire as it was 15 years ago during the aftermath of the credit crisis. During that period, many lenders needed capital infusions as the enormous strain of bad debt ate into their balance sheets. Currently, banks have strong balance sheets and that gives them a greater ability to adjust. 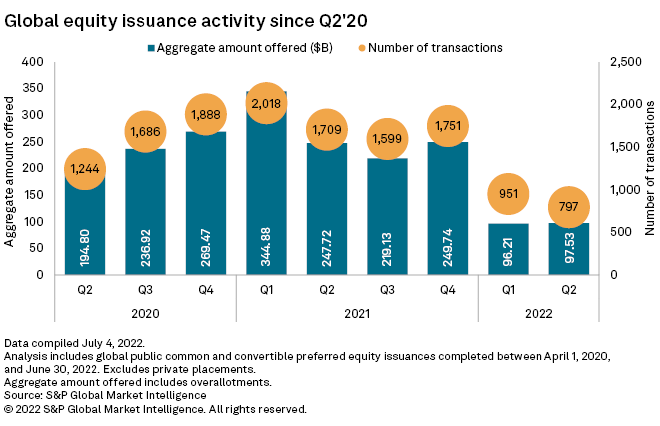 But many other obstacles to dealmaking remain. Evercore Inc. Chairman and CEO John Weinberg noted that the macroeconomic environment continues to be challenged by historically high inflation, supply chain constraints, rising interest rates, geopolitical tensions and the current regulatory environment.

Despite the headwinds, strategic dialogues are continuing, Weinberg said. M&A discussions typically pause during uncertain times, but Weinberg said there are several factors that can give prospective suitors reason to continue considering transactions. The CEO noted that companies still have good leverage levels and cash on the balance sheet, but they are less likely to execute a transaction during volatile markets.

"There is a view that being ready if the market turns is smart," Weinberg said.

Along with the uptick in larger deals in early August, there have been other signs of a turn. Inflation has shown some signs of peaking, and stock prices have rallied this summer.

However, the Federal Reserve is expected to keep raising interest rates. The higher financing costs add costs to acquisitions and weigh on valuations, both of which can slow M&A.