Will You Charge More For 5G?


Will You Charge More For 5G?

While just two of the six North American carrier executives we surveyed expect to charge more for 5G compared to 4G, 71% of the entire global carrier executive base expects a 5G price hike.

Three of the six North American executives surveyed in Kagan's August B2B 5G survey expressed no plans for rate increases, making North America the least likely of all regions we reviewed to charge more for 5G. However, we did not inquire if North American carriers planned to move back to metered plans from unlimited, which, as outlined below, can have a positive impact on average revenue per user. 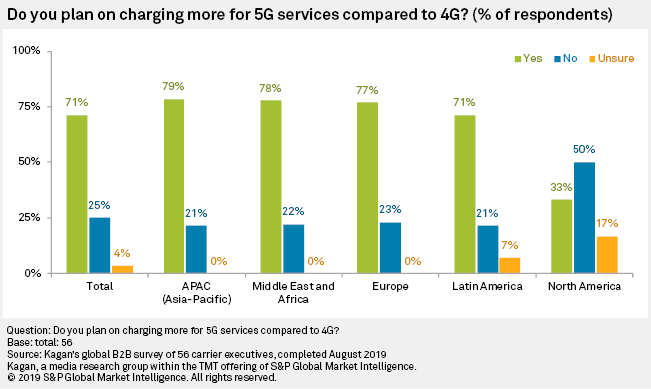 American and Canadian consumers already pay among the highest bills for wireless in the world, at around $40 per month, perhaps giving operators pause on rate hikes.

To help us think about future North America 5G ARPUs, we also reviewed historic data during the 4G transition, when ARPUs moved both up and down due to three variables, and found:

These three trends combined to give ARPUs a roller coaster ride during the 4G transition. Industry total ARPUs dropped from $46.60 in first quarter 2010, near the LTE launch, to $35.54 in second quarter 2019, while postpaid ARPU went from $55.53 to $45.51 comparing the same periods.

Perhaps most importantly, none of these ARPU wobbles have impacted the northward charge of mobile EBITDA. Industrywide, EBITDA has grown from the $12 billion range quarterly in 2007 to the $25 billion range in more recent quarters.

While South Korean operators are even under scrutiny from regulators for offering heavily subsidized 5G device discounts, this also no doubt helped the country top 3 million new 5G subs as of September 9, 2019.

In the U.S., carriers have yet to make any big 5G discount moves, but it is still early. Apple Inc. launched its latest iPhone 11 earlier in September, but none of the phones are 5G compatible.

Kagan’s global B2B survey of wireless providers on their 5G deployment and service development strategies populated more than 2,000 data points and yielded insights on deployment roadmaps, technology approaches, pricing strategies, killer apps, and plans for rural deployments. The data is available in our "survey banner" file that presents the results of 24 key questions asked of executives and decision makers at 56 discreet wireless carriers in all major geographic regions.