Our analysis shows that sports networks with the highest license fees also enjoy the widest carriage on base packages offered by most skinny bundle operators.

Virtual multichannel services see sports networks as an important part of the bundle even though these channels continue to drive higher programming costs, which has led to frequent price hikes.

Our analysis shows that sports networks with the highest license fees also enjoy the widest carriage on base packages offered by most skinny bundle operators. We looked at 40 sports networks, including TBS and TNT, which carry the rights for premium sports content like the NBA, NCAA Men's Division I Basketball and MLB. 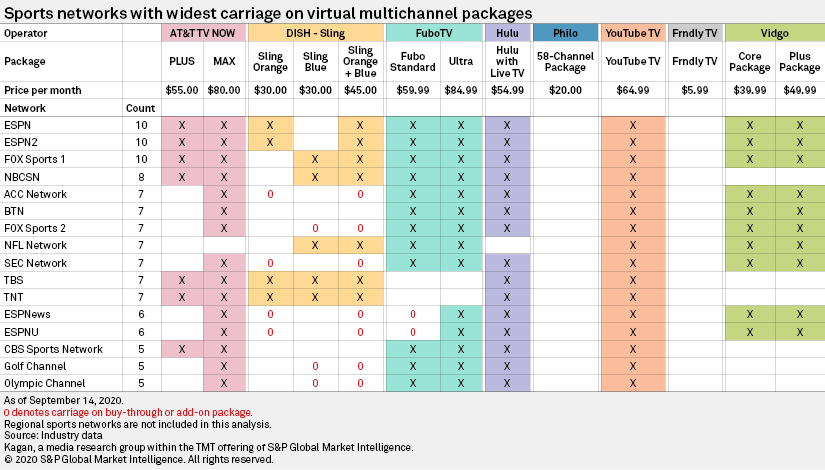 Of the 13 virtual multichannel base packages we looked at for this report, ESPN, ESPN2 and FOX Sports 1 were included in 10 packages. ESPN remains the most expensive basic cable network, with an estimated average affiliate fee per sub per month of $7.64 in 2020, while average rates for both ESPN 2 and FOX Sports 1 reached $1.04. The NFL Network, which charges around $1.79 per sub per month, is available in seven base packages.

College sports networks such as SEC Network, ACC Network and BTN, which were each available in seven base packages, were also among the top 10 most expensive cable sports networks in terms of 2020 average affiliate fee per sub per month. 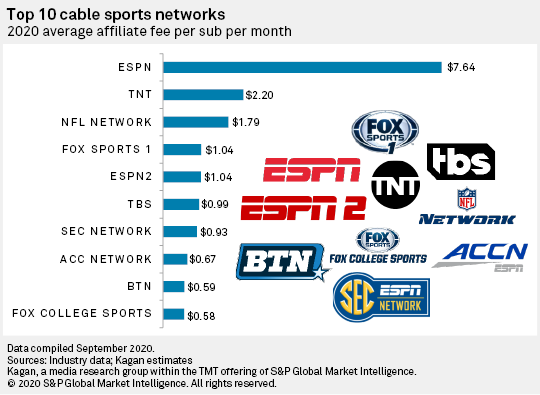 However, note that license fees to carry these networks are likely higher for virtual multichannel services, as programmers charge them a significant premium due to lower subscriber penetration compared to traditional MVPD counterparts that tend to get the lowest programming rates. Moreover, further consolidation in the industry may also mean that virtual multichannel operators that want to beef up their base packages with sports networks might not have as much leverage in negotiating for the exclusion of non-sports channels that are also part of bloated cable network portfolios owned by top media conglomerates. Carrying bigger channel bundles expands programming costs, making it more difficult for the business to become profitable without significantly raising prices.

Fubo TV, which has marketed itself as a sports-centric virtual multichannel service, finally added ESPN's suite of networks across its packages last August. The affiliate deal also included carriage for other The Walt Disney Co.-owned networks such as ABC, Disney Channel, Freeform, FX and National Geographic Channel. Given the new channel additions, Fubo TV had to implement a $5 monthly price increase across all of its base packages effective Aug. 1. The price for Fubo TV's Standard package went up by 9.1% to $59.99 per month, while the price for the Ultra package grew by 6.25% to $84.99 per month. The service also removed 11 WarnerMedia networks, including TNT, TBS, Cartoon Network / Adult Swim and CNN, after failing to reach an agreement with AT&T Inc.

After closing the distribution deal with Fubo TV, Disney in August reportedly acquired an estimated 17% ownership stake of the service's parent company Facebank Group by purchasing more than 6.6 million shares of common stock. Disney already operates Hulu + Live TV, which is one of the biggest U.S. virtual multichannel services in terms of subscriber count.

Alphabet Inc.'s YouTube TV, which offers a sports-heavy channel lineup, also announced a price increase of 30% to $64.99 per month after signing an affiliate deal with ViacomCBS Inc. for cable networks, including BET, Comedy Central MTV, Nickelodeon, Paramount Network and VH1. The service also announced that it has added NFL Network to its base package one week before the start of the new NFL season. YouTube TV created a new Sports Plus add-on package, which costs $10.99 per month and includes other sports channels like NFL RedZone, FOX College Sports FOX Soccer Plus, GolTV, MAVTV, Stadium and TVG.

After a carriage dispute last June, Dish also secured a new deal with the NFL to bring back the NFL Network on the Sling Blue and Sling Orange + Blue packages in time for the new season. 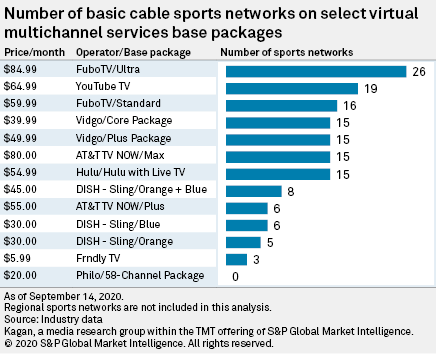 Among the virtual multichannel bundles we examined, Fubo TV and YouTube TV offers the widest selection of basic cable sports programming in their lineups. FuboTV's Ultra package has the most number of sports networks, including league-owned channels like MLB Network, NBA TV and NHL Network as well as other niche sports channels. Meanwhile, Hulu LLC's Hulu with Live TV and AT&T TV Now's MAX package offer most of the top sports channels except for the NFL Network, but both packages do not carry niche sports networks.

Meanwhile, Hispanic sports channels like ESPN Deportes and FOX Deportes are available on Vidgo's Core and Plus packages while Kroenke Sports & Entertainment LLC-owned Outdoor Channel, Sportsman Channel and World Fishing Network are the only sports channels available on Frndly TV. Smaller sports networks like Outside Television and Pursuit Channel are only available as part of add-on packages on select services. 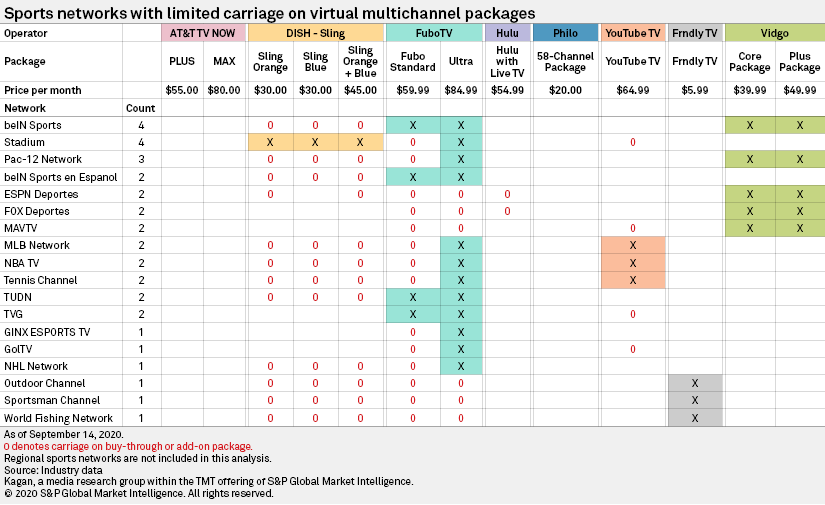 DISH Network Corp.'s Sling TV has a limited selection of sports channels included in its base packages, but the service offers most of the networks as part of add-on bundles, which costs $5-$10 per month.

To get an estimate of basic cable networks sports programming costs as a percentage of monthly price for each of the skinny bundle base packages, we increased Kagan's 2020 averages for license fees per sub to reflect the higher premiums paid by virtual multichannel services to carry the networks. Our analysis shows that sports programming costs on average account for about 37.5% of the monthly price of the base packages we examined. Smaller services like Vidgo and Frndly TV are likely paying a significantly higher premium compared to the other virtual multichannel operators because of the way volume discounts work.

As rising programming costs hurt the bottom line of virtual multichannel services, Philo continues to steer clear of expensive sports channels. The strategy seemed to work well for the low-cost skinny bundle, which mostly offers a variety of general entertainment networks in its 58-channel base package. Philo gained traction among cord-cutters that do not care much for sports content and reached 700,000 subs as of midyear 2020.

Sports are still considered some of the most valuable content on linear television since it delivers huge live audience numbers that attract advertisers. Sports networks, however, have struggled with viewership declines for most of the first half of the year due to the lack of fresh content amid the coronavirus outbreak. Combined 24-hour delivery for Nielsen-rated sports networks have fallen year over year by double-digit percentages every month since major sports leagues canceled or postponed their respective seasons last March.