US Cable Capex Falls In 2019, Charting Course For 5-Year Forecast


US Cable Capex Falls In 2019, Charting Course For 5-Year Forecast

The U.S. cable industry is on course to finish 2019 with its first drop in total capital expenditures in nearly a decade, marking a shift in budgeting that topped $20 billion in the trailing two years.

According to Kagan estimates for total cable capex, the tally for U.S. operators is expected to fall to approximately $17.62 billion in 2019 behind lower demand for set-top boxes and an easing in spending on the types of headend and network equipment that fall into the scalable infrastructure category.

Rather than an aberration, we expect the drop to mark the start of a prolonged decline in spending by an industry facing a consumer-driven retreat from big-ticket video delivery and the associated proprietary equipment to support it.

Our revised outlook calls for a decline in the five-year view but still at elevated levels when compared to historical capex totals. We estimate industry spending will drop to $16.17 billion by 2023, producing a negative 4.7% CAGR. The downward trajectory is in contrast to the comparable five-year historical period, which produced a 6.8% CAGR with persistent year-over-year growth from 2013 to 2018.

Capital intensity, or capex as a percentage of revenue, is expected to produce even more significant declines in the outlook, reaching below the historical watermark. Expectations for modest increases in overall revenue, primarily from residential broadband and commercial services, overlaid on reduced total capex work to shrink industry intensity to 11.3% in by 2023. 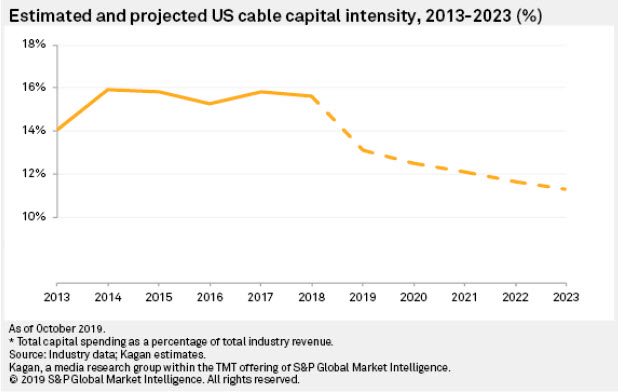 US Cable Capex Falls In 2019, Charting Course For 5-Year Forecast