Both mobile operators and regulators experienced a consequential year in 2020 as the COVID-19 pandemic forced the cancellation of several much-awaited spectrum auctions. Kagan curated a list of rescheduled and upcoming auctions worldwide, split into three broad categories: low-band, mid-band, and high-band or millimeter-wave spectrum.

To view the complete list of upcoming spectrum auctions

Auctions for low-band spectrum below 1 GHz are set to be held in 32 markets worldwide in the upcoming years, mostly in the 700 MHz band. Markets in the Asia-Pacific region originally planned to release 700 MHz last year to comply with the 2020 deadline for adopting the APT700 standard for 4G. European markets were similarly bound by a 2020 deadline for the band, but for 5G as stipulated in the 5G Auction Plan of the European Union.

The COVID-19 pandemic crushed the timeline for compliance for both plans, which is why several tenders for the 700 MHz band remain slated for 2021. Since the band can be used for both 4G and 5G, some markets in Asia-Pacific and Latin America and the Caribbean opted to tag their 700 MHz auctions either for both technologies or as technology neutral.

India was one of the most prominent markets that were originally set to release low-frequency spectrum last year. The local regulator earmarked lots in the 700 MHz, 800 MHz and 900 MHz bands to help alleviate the market's spectrum deficiency. The regulator eventually pushed back the tender to the first quarter of 2021 after heeding the calls of financially distressed operators that complained about the expensive auction fees.

Malaysia, on the other hand, awarded licenses in the 700 MHz band in May 2020 only to revoke them the following month after complaints from local operators. Malaysia is targeting to auction lots in the band some time this year.

The 700 MHz band has already been set aside for the Red Compartida wholesale network in Mexico, so the regulator shifted the market's low-frequency 5G band to 600 MHz. Mexico and Hong Kong are notable for being the only markets so far to set an auction for the 600 MHz band for 5G use. The same band is used in the U.S. by GCI LLC, T-Mobile US Inc. and United States Cellular Corp. for their 5G networks. 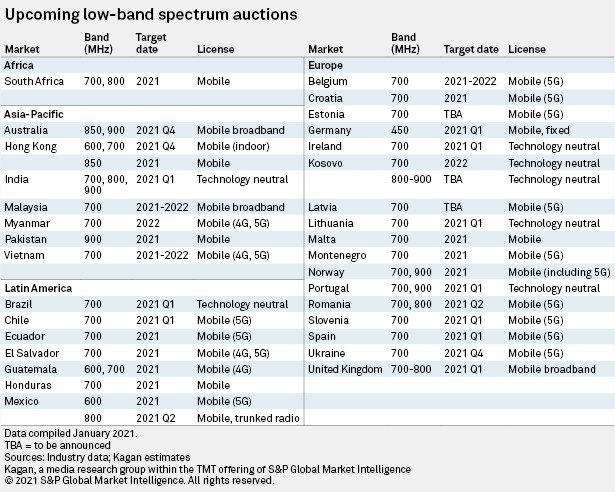 Mid-band spectrum (between 1 GHz and 6 GHz)

Most of the derailed auctions in 2020 were supposed to release mid-band spectrum for 5G, specifically in the 3.5 GHz band because of its good balance of network coverage and capacity.

Europe, where 3.5 GHz 5G deployments are the most popular, saw a wave of auction postponements to late 2020 or early 2021 in Austria, Belgium, Czech Republic, France and Portugal among others. Hungary was able to finish its 700 MHz, 2.1 GHz and 3.5 GHz tender in March before pandemic-related restrictions swept the region.

Operators whose 5G plans were hinged on the release of 3.5 GHz spectrum were caught off guard last year by the postponement of auctions in several markets. Some operators, such as those in Brazil, became resourceful. In the absence of 3.5 GHz allocations, some embraced Dynamic Spectrum Sharing, or DSS, for 5G. This entailed the use of low- and mid-band spectrum such as 700 MHz, 1.8 GHz and 2.6 GHz originally used for earlier technologies as substitute bands for 5G.

DSS 5G and the expiration of old spectrum licenses are factors in the increase in the number of markets planning to auction mid-band spectrum aside from 3.5 GHz. At least 35 markets worldwide have plans of auctioning mid-band spectrum in upcoming years.

The U.S. recently held two mid-band auctions: the CBRS auction (3.5 GHz to 3.7 GHz) concluded in August 2020 and the highly anticipated C-band auction (3.7 GHz to 4.2 GHz) that is yet to be concluded. An auction of the 2.6 GHz band is in the consultation phase. Canada is also planning to auction the 3.5 GHz band this year. 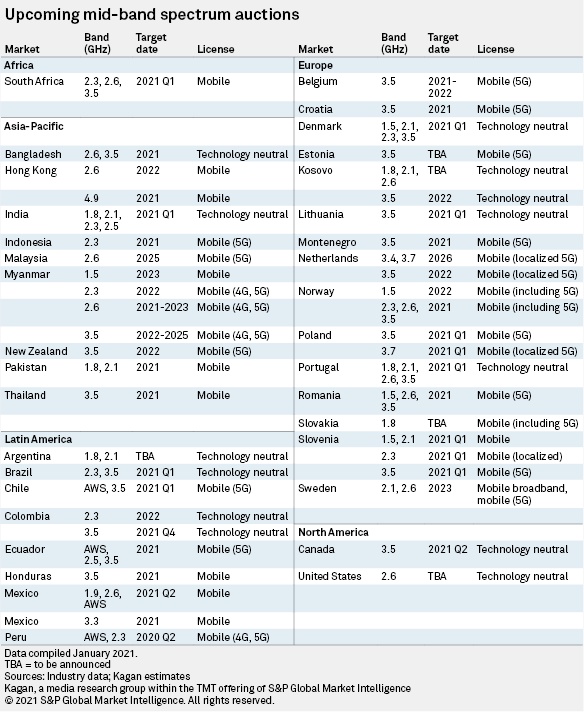 Only 16 markets so far have confirmed plans of auctioning millimeter-wave, or mmWave spectrum, mostly in the International Telecommunication Union's officially sanctioned 26 GHz band.

MmWave bands still have a smaller following than low- and mid-band spectrum despite the International Telecommunication Union's approval of their use for mobile services in November 2019. Apart from being new and having a less-developed ecosystem, mmWave bands pose significant cost issues related to tower densification and power consumption that discourages some operators from using them.

Consultations in some markets such as Chile, Cyprus and Poland yielded little to no demand for millimeter-wave spectrum from operators, causing regulators to scrap proposed auctions for these bands. This mirrors Hong Kong's experience in March 2019, wherein the local regulator skipped the planned auction process and assigned lots in the 26 GHz and 28 GHz bands to operators for free due to lack of demand.

North America seems to be the only region where millimeter-wave spectrum is highly coveted. The U.S. successfully auctioned licenses in the 37 GHz, 39 GHz and 47 GHz last year after successful allocations of the 24 GHz and 28 GHz bands in previous years. Canada likewise designated the 26 GHz, 28 GHz, 37 GHz-40 GHz and 64 GHz-71 GHz bands as high priority bands that are set to be auctioned starting this year. 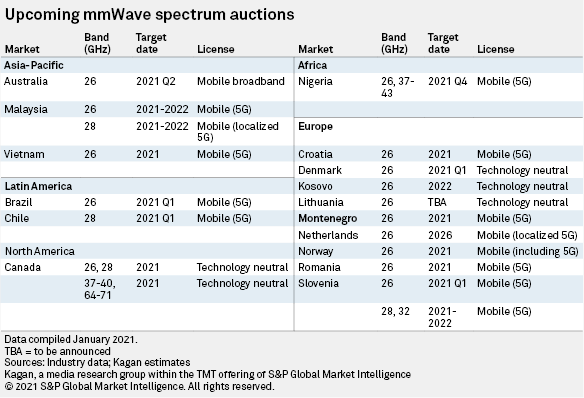