Tower Values Rising On Run Up To 5G


Tower Values Rising On Run Up To 5G

If you're an existing client, read on Market Intelligence

Both AT&T Inc. and Telefónica SA are shopping their tower portfolios to raise billions. The timing might be ideal, considering the world's high hopes for 5G.

Regulators worldwide have earmarked fresh spectrum for 5G in mid-band (3 GHz-5 GHz) and millimeter-wave (24+ GHz) ranges, frequencies not normally used for mobile services. This higher-frequency spectrum has a smaller coverage range and is more susceptible to line-of-sight disruptions than traditional mobile spectrum. As a result, it requires more towers and small cells to make up for the weaker propagation.

U.S. tower values are rising as a result. Looking at 92 U.S. deals over the last decade, the average price per tower was around $500,000. But American Tower in July 2019 acquired Grain Management for more than twice that amount, at $1.3 million per tower, and the 2018 acquisition of Frontier Communications by Everest Infrastructure averaged $701,600 per location.

Similarly last month AT&T Mobility sold 1,000 towers to Peppertree Capital for about $680,000 per tower, raising $680 million to shore up its balance sheet following its acquisitions of Warner for $108 billion and DIRECTV Holdings LLC for $49 billion.

AT&T’s U.S. tower sale is the fourth major tower sale from the company since 2007. Over the last 12 years, AT&T has raised $5.89 billion from the sale of 11,492 towers, about $512,530 per tower on average. Despite the divestment, AT&T is apparently still pursuing building redundant towers in an effort to reduce its tower rental expenses.

Clients can access details on all tower comps here in our supplemental file.

A few hundred more of AT&T's US towers could still be on the block: Company executives have mentioned as many as 1,300 U.S. towers are for sale. These are in addition to 1,500 towers it wants to sell in Mexico, which we estimate could be worth about $357.7 million based on recent comps in Latin America.

Also last month, Spain-based Telefónica hired Goldman Sachs to help it shed over 50,000 of its towers. It has wireless infrastructure in 12 countries with the majority located in Spain, U.K., Germany and Brazil.

Telefónica estimates its 50,000 towers would generate an operating income of about $401 million annually.

Despite the recent pickup in deals, a couple of large deals in the Middle East were recently shelved by regulators. Edotco's $940 million offer for 13,000 Pakistan towers failed to gain regulatory approval and was abandoned in September 2018 and IHS Towers' $672 million offer for 8,100 Zain towers in Saudi Arabia was denied by Saudi regulators this June.

By country, The U.S. and Australia kept their top slots in terms of average price per tower sold according to comps from the last 10 years. 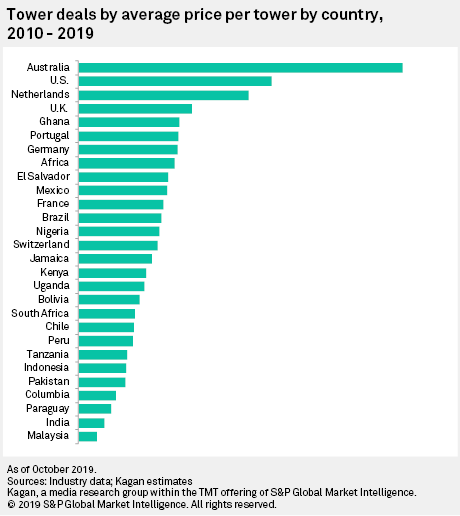