Beat Saber, from independent studio Beat Games, is the top-grossing VR game across multiple platforms, combining for an estimated lifetime revenue total of $69.7 million as of September 2020. 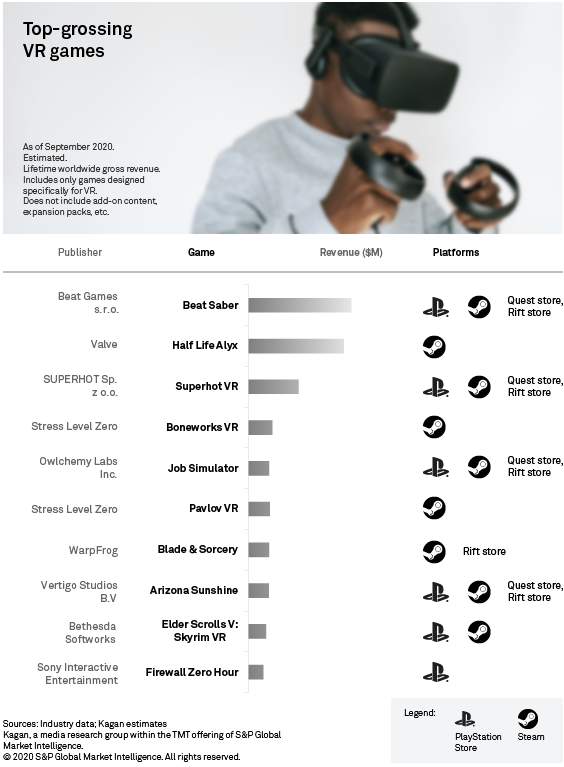 Note that our analysis of does not include add-on content or expansion packs, of which Beat Saber would be the primary beneficiary. The game sells extra songs with play-along patterns individually for $1.99 or in bundles at various price points.

Half Life Alyx, the No. 2 top-grossing VR game on our cross-platform list, points to a future when more established publishers deliver large-scale VR games at higher price points. Our analysis indicates that the Valve Corp.-published game has grossed $64.6 million in just six months, whereas Beat Saber has been in at least one online store for 28 months.

Still, the top-grossing games in VR pale in comparison to titles that release across the widely installed consoles. For instance, Activision Blizzard Inc.'s Call of Duty: Modern Warfare made $1 billion in revenue in its first two months after its release in October 2019. 2K Games Inc.'s Red Dead Redemption 2 made $725 million in its first weekend of release in October 2018.

Kagan's VR game analysis is based on the number of reviews left by consumers on digital storefronts for each game. Trends observed supported the assumption that between 0.5% and 5% of consumers leave reviews on games they purchase, which can be used to establish a ratio of reviews to purchases.

MI clients can access our full report, which breaks out the top 10 games in each of the top four VR software storefronts.