In our recent Voice of the Enterprise, Storage: Transformation 2020 study, we found that 32% of respondents are using monitoring or incident response tools that employ AI/ML, with a further 25% either in discovery or with plans to implement the tools in the coming years. Adoption is being led by the kind of technology early adopters that can and do get the most benefit from the tools.

With more than half of respondents to our survey either already using or planning to use AI/ML-enabled monitoring or incident response tools, we think adoption is strong, particularly if you're considering the more capable tools that have emerged in the last couple of years. Organizations that are on the leading edge of new technology adoption are more likely to have already embraced AI/ML monitoring tools, and they're more likely to appreciate them, according to our research. This adoption pattern indicates that tech leaders have more to benefit from AI/ML-enabled capabilities, and suggests the potential for continued growth of AI/ML-supported monitoring tools as more of the market marches toward the cloud-native technologies that demand a new approach to monitoring.

Cloud-native adopters benefit the most from AI/ML-driven monitoring

AI/ML-enabled features in monitoring tools have matured quite a bit since they first emerged. Some initial applications were cumbersome and prone to error – for instance, they required users to choose an algorithm to run against a particular dataset – and thus had limited utility. Others arguably didn't actually employ AI or ML, although they were marketed as such. However, products have evolved recently with some monitoring tools running anomaly detection across all ingested data. A tool may group anomalies into incidents, indicating to users when a series of anomalies is related to a single problem. More recent AI/ML-driven developments include capabilities that surface past incidents that are similar to an ongoing incident in order to guide responders to the appropriate fix.

These types of advancements appear to be driving adoption. In our recent Voice of the Enterprise: Storage, Transformation 2020 survey, 32% of respondents said they are currently using a monitoring or incident response tool that employs AI/ML, with a further 12% in discovery or proof of concept. Twenty-five percent said they are not considering such tools.

We found a dramatic difference in adoption based on whether a respondent is a tech leader – either an early adopter of technology or pragmatic but likely to act sooner rather than later – or a tech laggard, likely to 'wait and see' or adopt late. Thirty-nine percent of tech leaders are currently using AI/ML monitoring or incident response tools, compared to just 11% of tech laggards. Tech laggards are also much more likely to say they aren't considering such tools (48%) compared to tech leaders (18%). 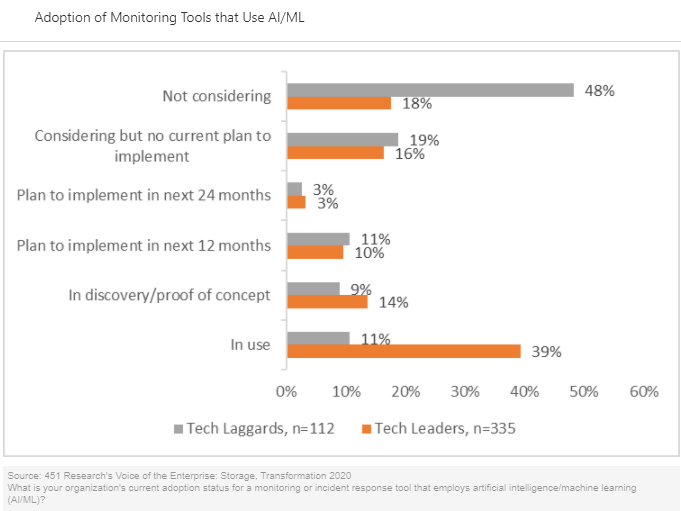 We see good reason behind the different adoption rates, namely that tech leaders likely have more to gain from AI/ML-driven features. Complex, distributed applications that employ containers, on-prem and cloud resources, orchestration tools, and microservices are more challenging to manage. They generate large volumes of operations data, and when performance problems occur, they issue a cascading series of events, making it difficult for operations professionals to pinpoint the cause. Monitoring and incident response tools that use AI/ML to, for instance, group alerts into incidents and recommend the source of problems are particularly helpful in these environments.

While we think that 32% adoption is strong in terms of the more advanced AI/ML capabilities that have emerged over the past couple of years, that adoption rate would appear low when considering tools that have been marketed as AI/ML-capable for roughly a decade. Our research indicates that users think AI/ML is overhyped and that they may recognize when products don't actually use AI/ML, such that respondents to our most recent survey may have been primarily focused on the more modern capabilities.

As part of our Voice of the Enterprise, Storage: Transformation 2020 study, we spoke with a manager at a large consumer/retail organization who very strongly values 'call home' features, even while determining that they don't use AI. We think this user represents a good example of someone who is savvy about identifying AI/ML hype while appreciating capabilities that have real value:

"If [artificial intelligence or machine learning enhanced management tools] are on there, then they're being used. We have a lot of systems that call home. I don't think of it as AI per se, because that's been around for years. If a system sees a failing part, they'll call IBM or call Pure, and we'll get alerted and a repairman will show up… It's great. Absolutely…I would not buy an infrastructure that did not have that feature. If it's not monitoring itself for any anomalies or any possible hardware failures, then it's behind the times. I don't want it."

We anticipate the continued development of monitoring tools and capabilities that apply AI/ML to increasingly large and varied datasets in ways that deliver strong value to practitioners, for anomaly detection as well as more sophisticated analytics. In the short term, we expect that users of cloud-native technologies will increasingly adopt and benefit from the emerging AI/ML-driven capabilities in monitoring and incident response tools. In the longer term, we anticipate that these tools will further develop to solve current challenges around applying AI/ML to a unified set of varied operations data, particularly in hybrid environments.