Facebook Inc. generated a massive $18.69 billion in revenue for the second quarter of 2020 while Twitter Inc., Snap Inc. and Pinterest Inc. were each well below the $1 billion mark. Second-quarter 2020 proved to be more difficult because of economic challenges presented by the COVID-19 pandemic. Despite these challenges, Twitter, Snap and Pinterest all had boosts in daily active users, or DAUs.

Facebook experienced a decline in revenue growth in mid-March 2020 that trickled into the first weeks of April. The social media giant noted there was decent recovery between May and June, providing enough economic stimulation to yield a 10.7% annual revenue jump in second-quarter 2020.

Twitter was hit the hardest out of the social media group with an 18.8% annual revenue decline during the quarter. The economic turmoil caused by COVID-19 coupled with the firm's continued ad targeting issues with its Mobile App Promotion, or MAP, products may have contributed to this dramatic revenue drop. The company had a 27% year-over-year drop in the last weeks of March 2020 with a gradual economic recovery throughout the second quarter of 2020. Twitter experienced a pause in recovery between late May and mid-June, however, as some large advertisers held back their social ad spending amid protests and boycotts on platforms including Facebook and Twitter.

Snap had the highest annual percentage increase in revenue of the pack at 17.1% in second-quarter 2020, while Pinterest managed smaller annual growth of 4.3%. Both companies noted that the effects of COVID-19 initially affected their revenue gains in March 2020, and ad spend began to gradually improve between April and June 2020 as shelter-in-place restrictions were relaxed. 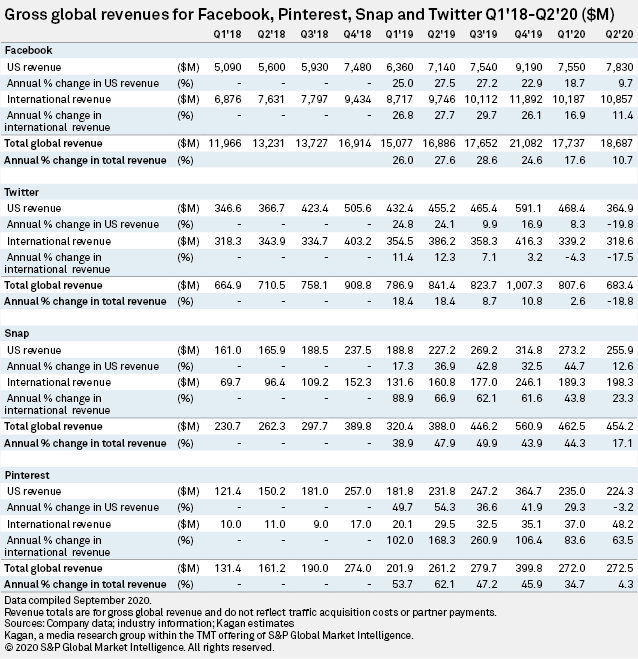 Snap continued to lead the pack with the highest annual percentage increase of 12.6% for U.S. revenue for the second quarter of 2020. Pinterest saw its U.S. revenue drop 3.2%, which is a sharp decline from previous quarters and was attributed to a compression in its average revenue per user as a result of COVID-19. Twitter saw the largest decline of 19.8% year over year for its U.S. revenues amid leading firms, with operating losses mounting as a result. 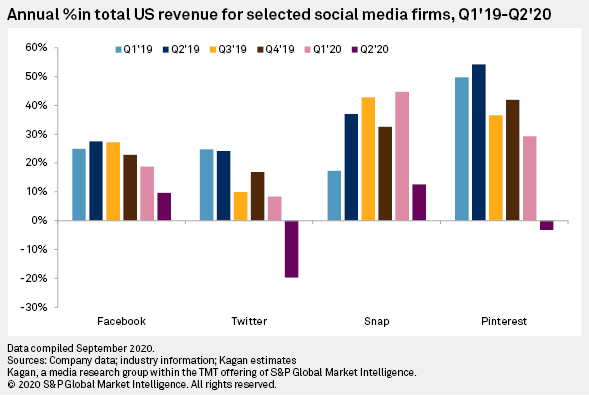 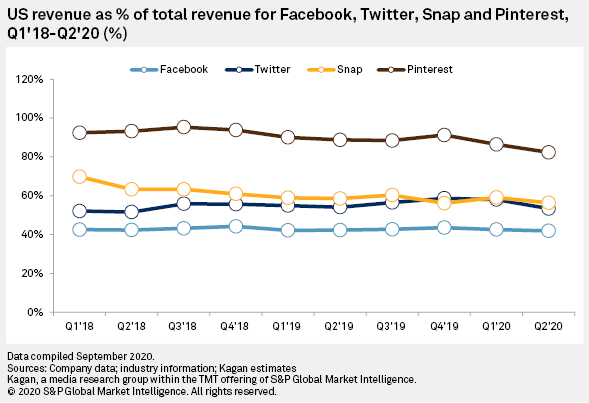 This was Twitter's second consecutive quarter of reported operating losses after several years of reporting positive income. Largely responsible for this were the social media company's revenue drop and an increase in its quarterly expenses, partly due to its acquisition of mobile app development company CrossInstall Inc. Snap and Pinterest continued to develop their social media platforms by funneling over 50% of their revenues into research and development, on top of other expenses.

Twitter had continued steady growth in global DAUs as well as the second-highest annual percentage change from the group. More people have been turning to Twitter as a source of information on current events related to social and political topics. Celebrities, political figures and other influential individuals have been posting their opinions about these issues on Twitter, which has further encouraged users to be more active on the platform.

Pinterest attributed its 39.6% annual growth in the second quarter to its users searching for creative projects to keep them busy while sheltering in place. Individuals with children may be more likely to use the platform in search of crafty ways to keep their kids entertained. 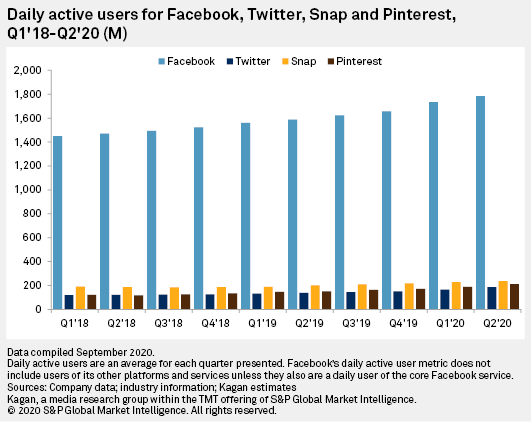 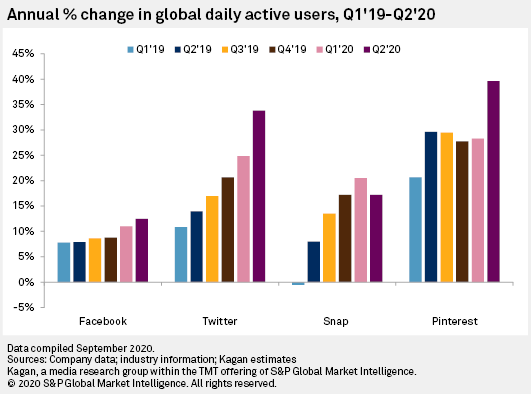 ARPU annual percentages dropped across the board as a decrease in advertising demand was felt across all platforms. Twitter has had annual ARPU reductions for several quarters and fell in the second quarter of 2020 by 39.3% year over year. Pinterest also took a hit with an estimated 25.3% drop in ARPU as a result of increased daily active users and decreased ad demand.

Snap was the only one of the pack that did not see ARPU decline on an annual basis in the second quarter. The firm attributed this to its continued investment in augmented reality, or AR. Snap recently launched a new Lens feature called "Try-On" where Snapchatters can virtually try on products and purchase them within the app. Innovations like this may stimulate ad demand on Snapchat from business sectors that target younger people. 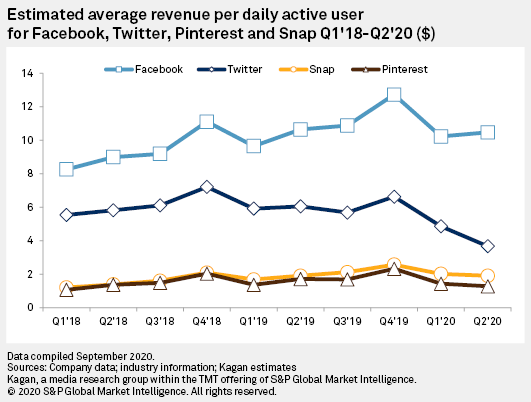 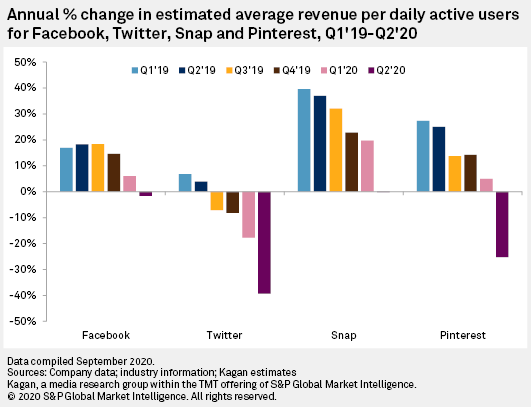