Natural language processing, or NLP, is a powerful tool for financial analysis, and this new report creates sentiment scores for broadcast quarterly earnings calls by topic over the last 10 years using Python and machine-readable transcripts from S&P Global Inc. As an example, based on this NLP analysis of textual data in broadcast earnings calls transcripts, compound sentiment scores on the topic of advertising have fluctuated from a low of 0.15 in 2009 to a high of 0.32 in 2015 and back down to 0.27 in second-quarter 2020 from the impact from COVID-19. 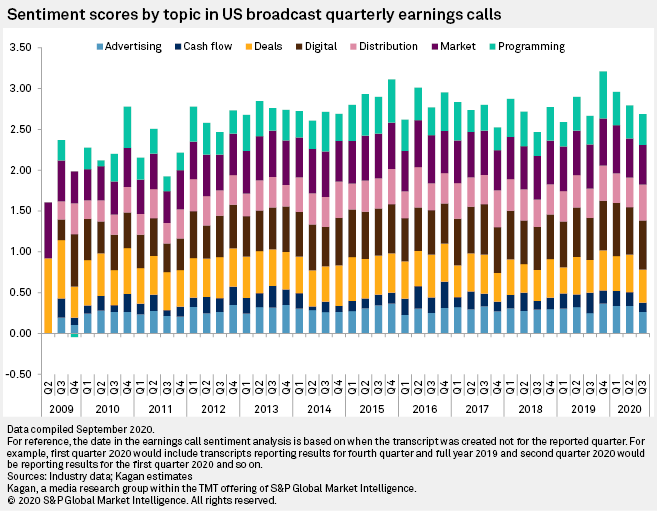 For background on the tools used in this NLP analysis, we used a "bag of words" approach in Python to tokenize each word in the string of text in each document, cleaned the data to remove stop words and other words that were not meaningful for the analysis, then processed the cleaned text using the Latent Dirichlet Allocation, or LDA, algorithm to do unsupervised topic modeling and fine-tuned to create industry-related topics. Topics were broken out into seven categories: advertising, cash flow, deals, digital, distribution, market and programming.

Using the VADER, or Valence Aware Dictionary and sEntiment Reasoner, package in Python, we created simple sentiment analysis scores for each topic that does not require any training data but is constructed from a generalizable, valence-based, human-curated sentiment lexicon. Compound sentiment scores range on a scale from negative 1 to 1, with negative 1 being a truly negative comment to 0 being a neutral comment to 1 being a truly positive comment. On average, earnings call transcripts skew positive, although can fluctuate from 0.0 to 0.5 in most instances.

Finally, the processed file was exported to Excel to visualize the data in pivot tables and charts. In addition, we added other industry-related financial metrics including broadcast public trading multiples for radio and TV companies and station deal volume and cash flow multiple metrics over the same period as a comparison.

Digging into the sentiment analysis, there is a trend corresponding to the peaks and valleys in the broadcast advertising marketplace over the past 10 years, although radio companies have lower scores overall compared to TV, which makes sense given the decline in ad share for radio. Closely correlated with advertising sentiment is the topic of cash flow with a peak of 0.24 seen in 2016 with a strong economy, Olympic and political year.

Not surprisingly, sentiment scores on the topic of deals have been relatively high in the 0.4 to 0.6 range over the past decade as consolidation has been a key component to growth in the industry, especially for TV station groups. However, that average sentiment score has declined of late as the pandemic and current local economic conditions have limited deal activity.

Correlated with the deals topic is the market topic, which has been somewhat stable in terms of sentiment scores, although has also seen a sharp drop off recently from a high of 0.59 earlier this year as broadcast stocks witnessed a big sell-off.

There is a similar downward trend for the topics of distribution and programming, which includes retrans, with cord cutting impacting top-line revenue growth. This is along with rising sports rights fees and reverse compensation compressing net retrans margins for TV station owners and networks that have to compete with new digital entrants for must-watch programming. On the radio side, the rise of Spotify Technology SA has taken listeners as well as talent away from local radio as podcasting becomes a viable alternative to syndicated radio network shows.

One topic that has seen a consistent rise in sentiment scores is digital, with radio companies focused on streaming and podcasting while TV station groups point to the benefits of ATSC 3.0 as well as the possibilities for growth in over-the-top and targeted advertising platforms.

Overall, there are some interesting takeaways from this NLP analysis of broadcast earnings calls, although they should be combined with other metrics to form a more holistic viewpoint on industry trends. We will continue to monitor these sentiment scores on a quarterly basis and produce reports for comparative analysis .