Probability of Default and Scoring Models: Similarities and Differences


Probability of Default and Scoring Models: Similarities and Differences

The past years have seen a proliferation of statistical models that combine financial ratios and socioeconomic/macroeconomic factors with advanced mathematical techniques to estimate the creditworthiness of publicly listed or privately held companies in a simplified, quick, automated and scalable way. Fundamentals-based credit risk models usually come in two flavors, depending on the asset class they aim to cover:

The two approaches tend to overlap on medium and large companies and, in most instances, produce the same or very comparable assessments. At times, however, they can provide divergent credit risk assessments for the same companies, with a difference of several credit score notches. This is not surprising since the models belong to different families of analytics, have been trained on different data sets and are characterized by different “DNAs” (medium-term assessments for PD models and long-term assessments for scoring models).

At S&P Global Market Intelligence, we offer both types of statistical models that are part of the Credit Analytics suite:

Source: S&P Global Market Intelligence, as of July 30, 2021. For illustrative purposes only.

For the same company, both models will generate the same weak output (i.e., worse than ‘b-’) within one notch most of the time, whenever the financial statement contains items that are weak across the board. In limited cases, however, there can be significant differences for the same company: one model may assign a worse than ‘b-’ score, while the other may assign a much higher score by six or more notches. Since each model looks at a limited sub-set of financial ratios, this could be based on a company filing a financial statement with a mixed profile, one that is partly “good” and partly “bad”2.

One such case is Just Energy Group Inc. (JE), a Toronto-based multi-utilities company that was founded in 19973 and provides electricity and natural gas commodities in the U.S. and Canada. Looking at Figure 1, CM 3.0 assigns a ‘bb+’ score to JE (top panel), and PDFN assigns a ‘ccc+’ score (bottom panel), which is six notches worse. 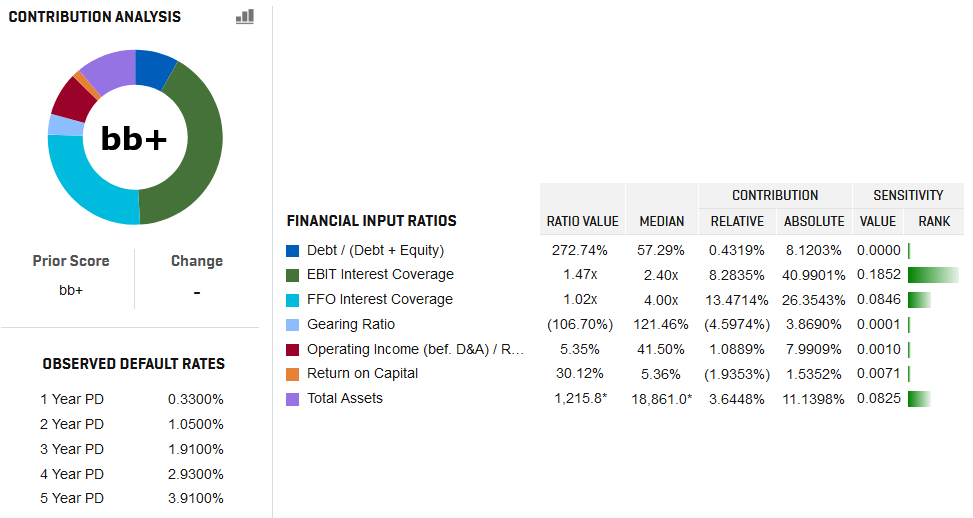 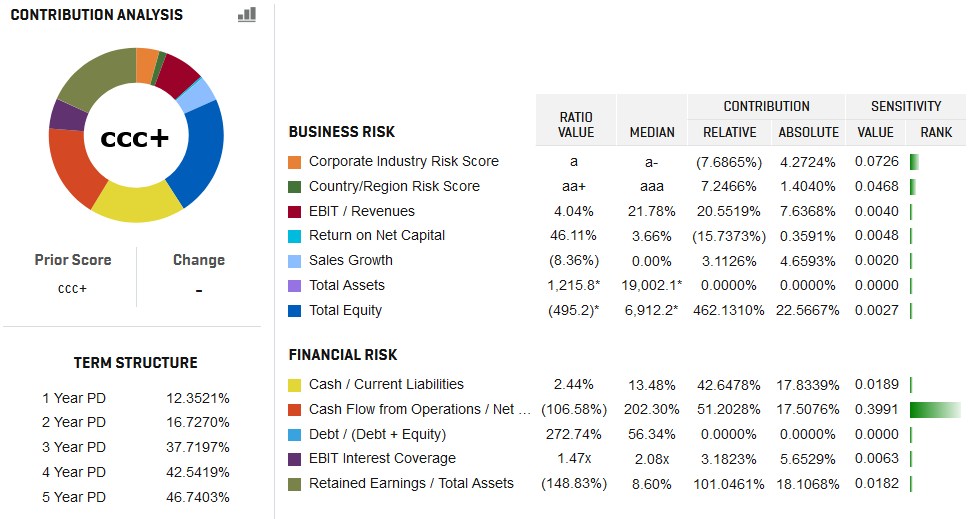 * Currency in millions of CDN dollars.
Source: S&P Global Market Intelligence, as of July 30, 2021. For illustrative purposes only.

Unlike in the CM 3.0 calculation, the company shows negative Total Equity and negative Retained Earnings/Total Assets in PDFN 2.0, which have a high absolute contribution to the ‘ccc+’ score. So, why did we not choose the same set of financial ratios when training these two models? There are two main reasons:

However, since each model looks at a specific set of financials, we advocate using both models when looking at the same company to get a more holistic view of credit risk.

4 This is also reflected in the choice of the financials. For example, in PDFN Private short-term Liabilities are included in one of the inputs.