• State lawmakers continue to make up for the lackluster 2020 legislative sessions. More than 150 energy-related measures were enacted in the second quarter, adding to the 35 measures signed in the first quarter. This is a sharp increase from the 65 measures that were signed by the end of the 2020 calendar year and 120 measures enacted in 2019, as tracked by Regulatory Research Associates, a group within S&P Global Market Intelligence. 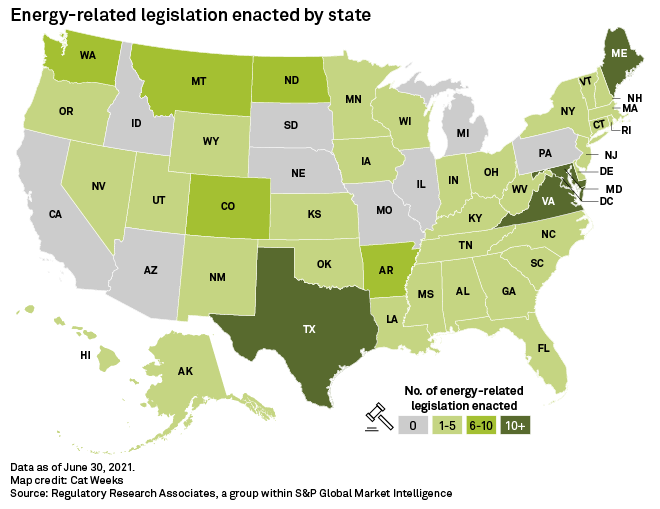 • Additional enacted measures dealt with storm recovery and securitization, alternative ratemaking, and rate design. A handful of states are looking into the possibility of participating in a regional transmission organization or an organized wholesale market.

• Legislatures in all 50 states and the District of Columbia convened during 2021. Currently, 12 states have legislatures still in session, with a majority adjourning towards the end of the calendar year. Over half the states have convened or are planning to call a special session, many focusing on state budgets, appropriations, unfinished business from the regular session, and redistricting. Additionally, many states commenced the first year of their two-year legislative sessions, allowing for measures to carry over into the next legislative session. 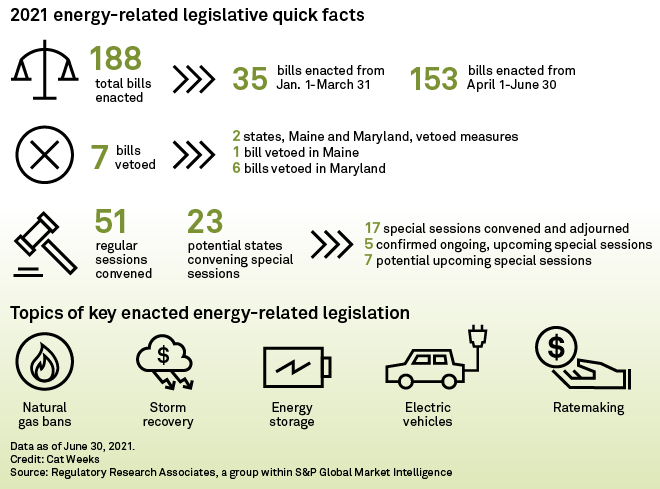 Over the years, the idea of electrification has gained vast momentum among industry stakeholders and lawmakers, with cities, municipalities and counties leading the charge on restricting natural gas use. Meanwhile, many state legislatures have begun to take preemptive steps to assure that local government entities are prohibited from passing such policies or ordinances.

While most of the state governors signed the enrolled measures, in Kansas, Senate Bill 24 became law without receiving Democrat Gov. Laura Kelly's signature. The Kansas Legislature, which consists of a Republican supermajority, passed SB 24, which prohibits a municipality from imposing any policy that prohibits an end-use customer's use of a utility service, specifically natural gas or propane. In Kansas, measures that the governor does not act upon within ten days of receiving the bill automatically become law. Since SB 24 was sent to the governor March 30 and did not receive the stamp of approval, the measure was then enacted April 9.

Though many of the states that adopted such measures have not seen much movement of natural gas bans at the local level, it seems that state lawmakers are reacting to electrification trends spreading through Democratic-stronghold states at the local government level and are attempting to get ahead of the issue.

Meanwhile, a large number of investor-owned utilities, which operate in the states that have adopted preemptive measures that ban natural gas prohibitions, have over the years, pledged to reduce their carbon emissions or achieve net-zero emissions by 2050. While "burning natural gas for energy results in fewer emissions of nearly all types of air pollutants and carbon dioxide than burning coal or petroleum products," according to the U.S. Energy Information Administration, natural gas still produces methane emissions which accounts for roughly 10% of all U.S. greenhouse gas emissions.

On the other side of the issue, Minnesota Gov. Tim Walz, a Democrat, signed House File 6 on June 26, which among other things, authorizes a natural gas utility to file a plan with the Minnesota Public Utilities Commission to obtain innovative resources that displace conventional natural gas, including renewable natural gas, power-to-hydrogen, power-to-ammonia, carbon dioxide capture, strategic electrification and others. The bill requires the programs within the plans to be cost-effective and reduce greenhouse gas emissions, as well as have a term of five years. The new law also requires the Minnesota PUC to initiate a proceeding no later than Aug. 1, to assess the need to amend natural gas regulatory policies in order to facilitate achieving the state's greenhouse gas emissions reduction goals.

In Colorado, Gov. Jared Polis, a Democrat, signed Senate Bill 21-264, which requires each gas distribution utility to file a clean heat plan with the Colorado Public Utilities Commission and demonstrate how it will use clean heat resources to meet certain clean heat targets. The bill defines a clean heat plan as a "comprehensive plan submitted by a gas distribution utility ... that demonstrates projected reductions in methane and carbon dioxide emissions that, together, meet the reductions required ... at the lowest reasonable cost." A clean heat resource would include any of the following: gas demand-side management programs, recovered methane, green hydrogen, beneficial electrification and pyrolysis of tires.

By Oct. 1, the Colorado PUC must update the electric and gas demand-side management rules consistent with the clean heat targets outlined within the measure. Additionally, the commission must remove any prohibition on customer incentives to help replace gas appliances with "highly efficient electric alternatives." Notably back in March, House Bill 21-1034 died in the House Committee on Energy and Environment and would have prohibited any statute, rule or local ordinance from banning the use of natural gas or propane for electrical generation, cooking, hot water or space heating.

Following the extreme winter weather events that caused major disruptions in energy markets and crippled portions of the Midwest in February, several states enacted measures stemming from the impact of the events.

In Texas, Gov. Greg Abbott, a Republican, signed a slew of bills that were introduced following the February winter weather event. House Bill 1520, which was signed June 16 and went into effect immediately, authorizes the Railroad Commission of Texas, or RRC, to allow gas local distribution companies to securitize extraordinary gas commodity costs associated with natural or man-made disasters, system failures and other catastrophic events for which the RRC has approved the creation of a regulatory asset.

House Bill 3648, which was signed on June 18 and went into effect immediately, calls for collaboration between the Public Utility Commission of Texas and the RRC on setting gas supply priorities during energy emergencies by designating certain natural gas facilities and entities as critical customers or critical gas suppliers.

Additionally, Abbott signed House Bill 4492 on June 16 and authorizes the Texas PUC to issue financing orders to securitize up to $800 million of amounts owed to the Electric Reliability Council Of Texas Inc., or ERCOT, by competitive wholesale market participants for the period in February when emergency pricing provisions were in place and financial revenue auction receipts used by ERCOT to reduce short payments and financing costs temporarily. The measure also allows up to $2.1 billion of costs "uplifted" to load-serving entities on a load ratio share basis due to energy consumption during the February emergency related to the reliability deployment price adder charges and ancillary services costs in excess of the commission's systemwide offer cap.

House Bill 2483, which was signed June 15 and goes into effect Sept. 1, authorizes electric transmission and distribution utilities to lease and operate facilities that provide power on a temporary or emergency basis to restore service more quickly following a major outage. Utilities may also enter into cooperative agreements with other utilities to procure, own and operate "long lead time" facilities, excluding battery storage, to provide backstop power to respond to major outages.

Kansas Gov. Kelly signed Senate Substitute for House Bill 2072 on April 9, allowing the state's electric and natural gas utilities to securitize certain "qualified extraordinary costs," including those related to February's extreme weather, upon receiving Kansas Corporation Commission approval of a financing order. Qualified extraordinary costs include those that "would cause extreme customer rate impacts if recovered through customary ratemaking, including, but not limited to, purchases of gas supplies, transportation costs, and fuel and power costs including carrying charges incurred during anomalous weather events." The commission is required to render decisions on requests for financing orders for plant retirement and abandonment costs within 135 days of submission of the application. For qualified extraordinary costs, the commission must issue a decision within 180 days of the request.

Oklahoma Gov. Kevin Stitt, a Republican, signed an amended version of Senate Bill 1050 on April 23. The measure known as the "February 2021 Regulated Utility Consumer Protection Act," provides for the state's utilities to be allowed to securitize, through the Oklahoma Development Finance Authority, the costs they incurred in connection with the February weather event following issuance of a financing order by the Oklahoma Corporation Commission. Costs eligible to be securitized include, but are not limited to, fuel, purchased power and natural gas commodity costs, fuel-related storage costs, emergency compressed or liquified natural gas supplies, contracts for services providing additional pressurization on lines and transportation pipeline penalties.

In Arkansas, Republican Gov. Asa Hutchinson signed House Bill 1557 on April 25, which requires an electric utility to have an emergency plan in place for individuals with disabilities or the elderly during certain weather events. Additionally, the bill requires electric utilities to directly notify local governments of planned power outages and other emergency measures to reduce energy consumption.

Legislatures in the District of Columbia and all state legislatures are in session during 2021. Following the 2020 general election, Republicans hold the governorship and majorities in both chambers of the legislature in 22 states, whereas Democrats have full control in 15 jurisdictions. In 12 states, power in both branches of the government is divided between Republicans and Democrats. Nebraska has a nonpartisan, unicameral legislature, while the Council of the District of Columbia is unicameral.

Currently, 12 states have legislatures still in session, with a majority adjourning towards the end of the calendar year. The Arkansas legislature began its recess on April 28 and is most likely to reconvene in September. In Idaho, the Senate adjourned sine die on May 15, while the House of Representatives went into recess the same day. The Idaho House of Representatives is required to reconvene by Dec. 31. The Indiana General Assembly recessed on May 10 and is expected to reconvene sometime in early November.

Over half the states have convened or are planning to call a special session, many focusing on state budgets, appropriations, unfinished business from the regular session, and redistricting. Three states — Alaska, South Dakota and Virginia — have confirmed dates for upcoming special legislative sessions, while the Delaware and Texas legislatures are currently in a special session. Seven states — Iowa, Kentucky, Nebraska, North Dakota, Oregon, Tennessee and Washington — are expecting to convene sometime in the late summer, early fall for special legislative sessions.

Learn more about our Energy solution.

Already a Market Intelligence platform subscriber? For 2021 major enacted and vetoed energy legislation tracked by Regulatory Research Associates, a group within S&P Global Market Intelligence, for the first half of 2021, check out the state-by-state summary tables.

Learn more about our Energy solution