Outlook for European CLO Supply Has Improved, but It Remains a Concern


Outlook for European CLO Supply Has Improved, but It Remains a Concern

While it's not out the woods yet, the resilience of the European CLO market is clear to see, with participants adapting to find pragmatic ways to clear out pre-COVID warehouses since the onset of the pandemic.

A market snapshot at the beginning of September strikes a more optimistic tone than in March, with average deal sizes increasing and the case for equity improving (albeit marginally).

A key hurdle for the remainder of the year though could be loan supply, with concerns that soft issuance levels will hamper CLO creation.

While it's not out the woods yet, the resilience of the European CLO market is clear to see, with participants adapting to find pragmatic ways to clear out pre-COVID warehouses since the onset of the pandemic. What’s more, market players are cautiously optimistic for the last four months of the year, with liabilities having tightened, and outstanding vintages also holding up fairly well. A key hurdle for the remainder of the year though could be loan supply, with concerns that soft issuance levels will hamper CLO creation, while selling CLO equity remains challenging.

"I think we could see around 20 more new issues this year," says a banker. "We signed new warehouses in the summer, and are confident these will price in the next few months. There are headwinds though, with new loan supply dragging, while selling CLO equity is still extremely difficult."

Register for our complimentary webinar on European CLOs

"The U.S. market is ripping, with triple-As there going tighter over the summer and CLO formation picking up," notes another banker. "This bodes well for Europe to follow, but placing equity here is still tough, and asset prices are moving faster than liabilities."

For now, a snapshot of the European CLO market at the beginning of September strikes a more optimistic tone than in March. Average deal sizes have crept up, the case for equity has improved (albeit marginally), and the terms offered to managers for new warehouses have loosened. 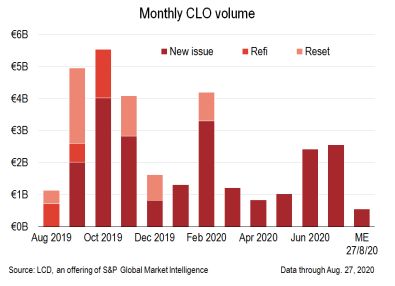 August, often a hiatus for the market, was interrupted by the printing of two new CLOs, including one which was upsized, highlighting the current appetite for CLO paper and suggesting more people were perhaps at their desks — remotely — than might have been expected. August is typically a slow month for CLO issuance, with two of the last five years hosting no supply, and with €540 million printing this August, the month was slightly ahead of the €490 million average over the last five years. 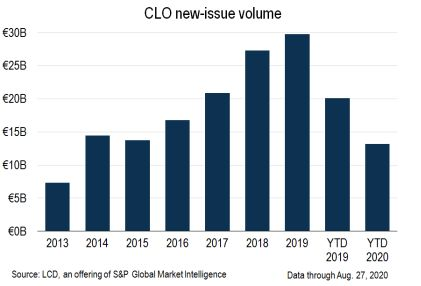 New normal
The European CLO market has priced €13.21 billion from 40 transactions so far this year (to Aug. 27), including €7.38 billion from 26 COVID-era prints (from April onwards), characterised by lower leverage and shorter non-call and reinvestment periods, which managers hope will allow them to refinance at more favourable levels next year. 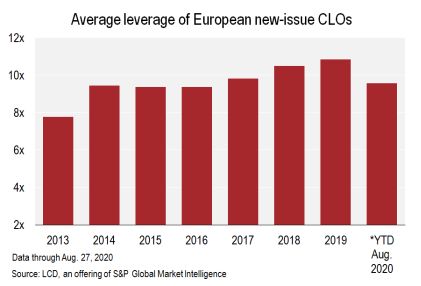 The improving conditions have prompted some analysts to revise earlier forecasts, and should the upper-end of estimates come to fruition, €6.8 billion of issuance could come through during the remainder of the year. 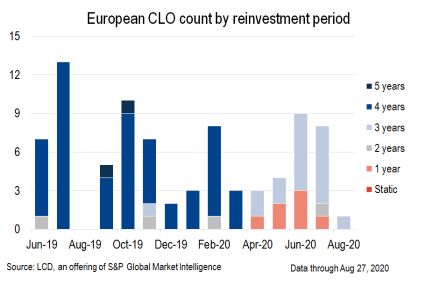 Indeed, analysts at Wells Fargo announced in a research note (published on Sept. 2) that they had revised their 2020 European CLO primary forecast to €20 billion.

And in a research note published last week, analysts at Barclays revised their forecast for 2020 gross European CLO supply to €15-€18 billion, from a previous estimate of €12-€15 billion. "While concerns around loan market quality and lack of new loan supply should remain a headwind, the continued improvement in loan prices and tightening in CLO liability costs have slightly improved the new issue equity arb," they wrote.

Improving case for equity
While tightening liabilities over the past five months have improved the case for equity, 140 bps remains the benchmark low for COVID-era triple-A prints for a European reinvestment CLO, the first of which priced in mid-July.

However, the expectation among managers and analysts is that liabilities will likely continue to tighten in the coming months — a view buoyed by tightening spreads across the Pond. 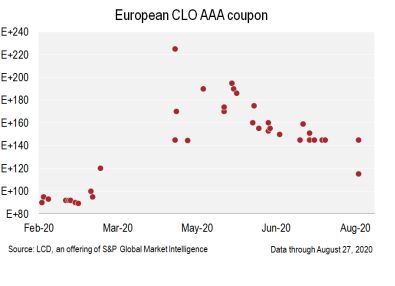 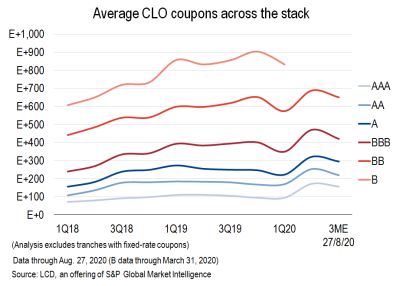 Challenges ahead
While the increase in CLO issuance since June was boosted by an uptick in primary loan activity, for those managers looking to launch now the outlook for the rest of the year remains hinged on liability levels and loan spreads, on which there is a lack of clarity going forward. "Whether you can get a deal done soon depends on how far ramped you are, and how you feel about levels," said one CLO manager.

In August, Wells Fargo analysts observed a 5-25 bps tightening of secondary spreads month-on-month through the double-As to double-Bs, with the triple-As unchanged.

However, the lag between rapidly tightening primary loan spreads and liabilities could prove a drag on new CLO activity. Anecdotally, one manager commented that good assets in primary could now be picked up in the low-400 bps/98.5 region, compared to 450 bps a few months ago, effectively meaning players were losing loan spread faster than the cost of liabilities was falling. 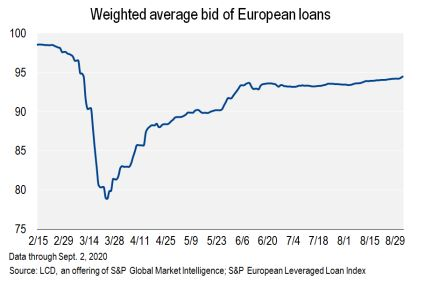 Meanwhile, a full recovery in secondary prices is getting closer, with the European Leveraged Loan Index (ELLI) up at 94.47 on Sept. 2, versus 98.54 in mid-February. This clearly makes it harder for a manager to ramp with secondary assets, given liabilities are still markedly wider than before the COVID-19 crisis hit. 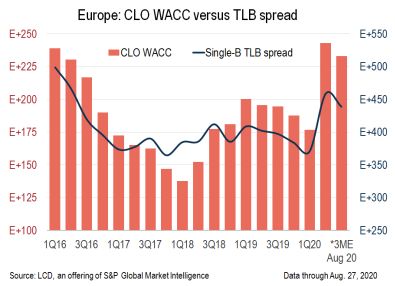 Another potential drag is the forward pipeline for the European leveraged loan market. With some €2.2 billion of visible debt in the pipeline (of which roughly €1.67 billion is institutional), this is currently 58% lower than the average weekly measure over the last five years.

Naturally there will be deals lining up that have not yet been revealed, but some managers say they are not being warmed up for a sizeable flurry of new loan deals.

Creation stations
Meanwhile, the outlook for new CLO warehouse creation is constructive. Anecdotally, managers are increasingly bullish on the prospect of opening new warehouses — particularly those managers able to provide in-house equity. Moreover, at least one bank is known to have signed new warehouses during the summer, and new CLO creation is therefore on the cards. There is a caveat though, in that primary loan supply is not strong enough for a sizeable ramp, and warehouses are therefore likely to see assets transferred in from funds' managed accounts, sources say. This dynamic will mean the arbitrage remains challenged.

Nevertheless, new warehouse creation represents a shift in attitudes compared to early in the pandemic, when banks were offering mark-to-market warehouses with tighter advance rates, tests and trading restrictions. Several managers have since said they would have been in trouble had they been sat on warehouses with the same terms offered in March.

While terms have since softened as the market has improved, the outlook for warehouse creation remains a conflicting point among some managers, with those with internal capital or retention funds most likely to be able to drive through new CLO creation. Indeed, placing third-party CLO equity is still deemed to be extremely difficult, meaning new issues will likely still largely come from those that can place the equity internally.

Static buzz
Elsewhere, static CLOs — those vehicles with no reinvestment periods — have rarely been a feature of the European CLO market, but one such deal priced in August, with more expected to follow in the longer-term.

In the U.S. market, static CLOs typically price some 40-65 bps tighter than reinvestment CLOs, buoyed by an immediately amortising structure, one-to-three year duration, and known collateral pool, which allows the manager to attract buyers beyond traditional CLO structures, according to sources.

Indeed, the €198.7 million Palmer Square European Loan Funding 2020-1, which priced in August via J.P. Morgan, printed considerably tighter than deals seen with reinvestment periods in Europe, at 115/175/280/400/680 bps on a DM basis through the triple-As to double-Bs. The manager — an established name in the U.S., and a proponent of static CLOs — is understood to be targeting three-to-four CLOs per year in Europe, comprising a mix of static and reinvestment CLOs.

One investor consulted voiced concerns that the market was moving in the wrong direction with static CLOs, highlighting that the fundamental advantage of a CLO is that it is managed. Moreover, it remains to be seen if more traditional managers will be motivated to dip their toes in the water here, given the lower management fees and the short-term nature of static vehicles.