Measuring The Wireline Digital Divide In The US

Analyzing Kagan's MediaCensus wireline broadband subscriber data across county lines shines a light on a nearly 30-percentage-point gap in high-speed data penetration between the most urban and rural areas.

We estimate that the U.S. counted 99.6 million residential wireline broadband subscriptions for a 78.8% national penetration rate in third quarter 2019. But 29 percentage points separated the nation's least populated counties from the most densely occupied ones at the end of the period.

Not a client yet?

Subscribe to our TMT monthly newsletter to stay up-to-date on industry news and insights. 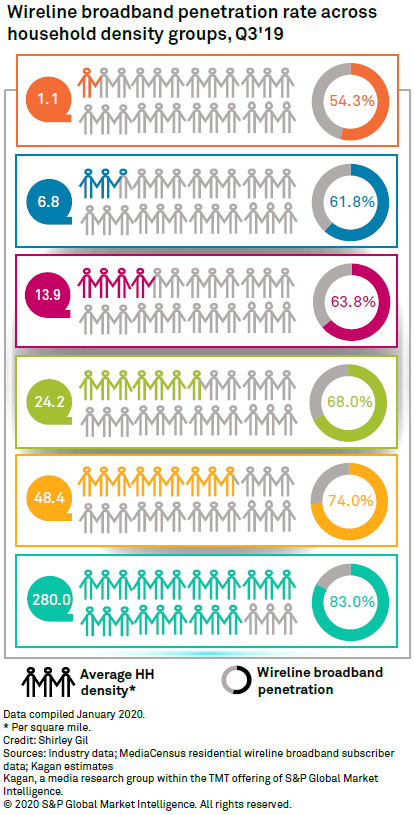 The most densely populated urban areas — or the group in our study averaging 280 households per square mile — had an estimated wireline broadband penetration rate of 83% as of Sept. 30, 2019.

The nation's most rural group on our density scale, or areas averaging 1.1 households per squarely mile, were taking wireline broadband service to the tune of 54%.

Even across slightly more populated areas, or the three groups in our analysis ranging from 6.8 to 24.2 households per square mile, the wireline penetration rate trails the top bracket by a significant margin.

Wireline broadband penetration take rates in rural America are likely impeded by limited service access due to uneconomical cable and telco deployment, inhospitable terrain or a combination of both.

This does not necessarily translate into zero broadband access. Such areas are the primary market for satellite-delivered broadband.

Note that in the typically more economically challenged rural areas, where traditional multichannel cord cutting is acute due to eroding affordability, some households might primarily rely on mobile wireless only to fill their broadband needs.