The COVID-19 pandemic and subsequent lockdowns positively impacted overall daily TV viewing times in Western Europe but not across all demographics. In countries such as the Netherlands, Germany and the United Kingdom, linear TV consumption by younger audiences continued to decline. News content featured prominently in the region's top-rated broadcasts as viewers sought reliable information on the pandemic. 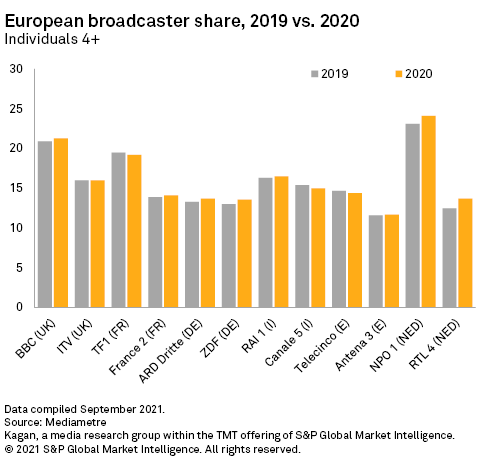 U.K. TV consumption stood at 3 hours 12 minutes for individuals in 2020, a 4.9% increase on 2019. However, despite the lockdowns, viewing among younger audiences continued to decline. Since 2016, there has been a 37% decline in younger adult viewing time. Ofcom's 2020 Media Nations Report identified two factors behind this decline: the growth of streaming services, such as Netflix Inc. and The Walt Disney Co.'s Disney+, and the continued growth in content consumption on Alphabet Inc.'s YouTube. 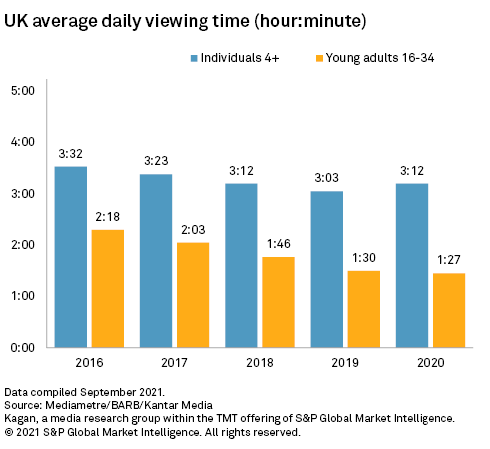 In terms of channel performance, national broadcasters such as BBC One, ITV and Channel 4, and their sister channels BBC Two, E4 and BBC News, all featured as the most heavily consumed services. The U.K.'s most-watched programming is traditionally dominated by live event shows such as ITV's "Britain's Got Talent," which reached an audience of 9.5 million for the final in 2019 and the BBC's "Strictly Come Dancing," which 12.6 million tuned in for the 2019 final. The highest-rated broadcast in 2020 was the prime minister's statement to the country on May 10, watched by 18.8 million.

French linear broadcast individual viewing grew by 13.3% in 2020 as the country went into national lockdown in March and October. Viewing for individuals stood at 3 hours and 58 minutes, higher than any of the previous five years. President Emmanuel Macron's address to the nation, on April 13 and Oct. 28, attracted the highest audiences, with 14.6 million and 11.6 million individual viewers, respectively. 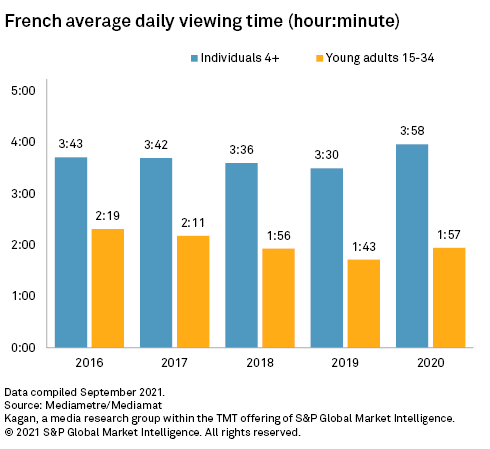 Drama series such as "Capitaine Marleau" and "Balthazar" and events such as the "Election of Miss France" pageants and the Les Enfoirés charity concerts were among the most popular broadcasts in both 2019 and 2020. Two Harry Potter films also attracted enough viewers to make the top 10 list in 2020.

Germany's TV viewing time grew overall in 2020, but as in the U.K., young audiences continued to desert the linear format, with viewing time for the demographic declining 8.5% year on year and 37% lower than 2016. Part of this decline can be attributed to the growth in online video consumption amongst younger audiences in Germany. 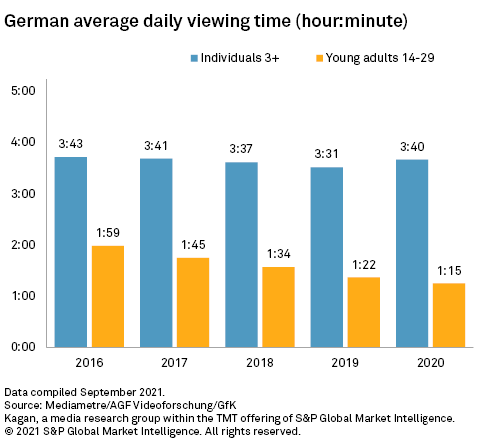 While news was one of the most-watched genres in Germany in 2020, the number one broadcasts in both 2020 and 2019 were episodes of the detective series "Tatort," with an audience share of 36.5% and 36.9%, respectively. Sports was a popular TV choice in 2020 with 12.8 million watching the Champions League Final between PSG and Bayern Munich on ZDF.

Italian viewing time is among the highest in the major European markets and has remained stable in recent years. During lockdown, average individual viewing times increased by 11.5% and young adults by 16.4% compared to 2019. Italy was the first country in the region to be affected significantly by COVID-19 and was the first to go into national lockdown. 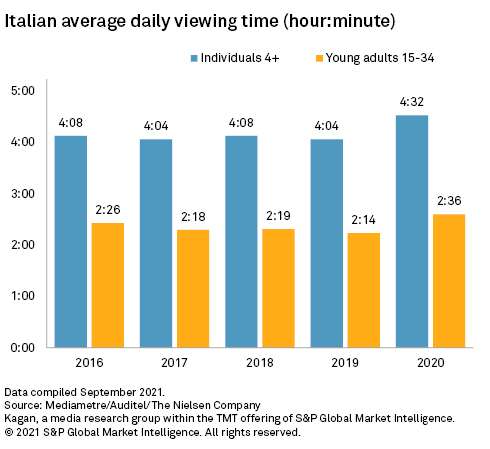 The most popular programming in Italy remained cultural events like the "Festival di Sanremo" music festival, which rated No. 1 in both 2020 and 2019 and has been the most popular broadcast since 2015. An episode of RAI1's "TG1 Edizione Straordinaria" on the COVID-19 crisis was the third highest-rated program in 2020 with an audience of 10.8 million and a 34.1% share.

2020 Spanish viewing times increased as well. Overall individual view time grew 6.8% to the highest level since 2015, while younger audiences increased viewing by 4.0% year on year in 2020. Taking a 14.4% share, Telecinco remained the most-watched channel while Cuatro increased share. Antena 3 was the second most popular channel in both 2020 and 2019 with 11.7% and 11.6% shares respectively. 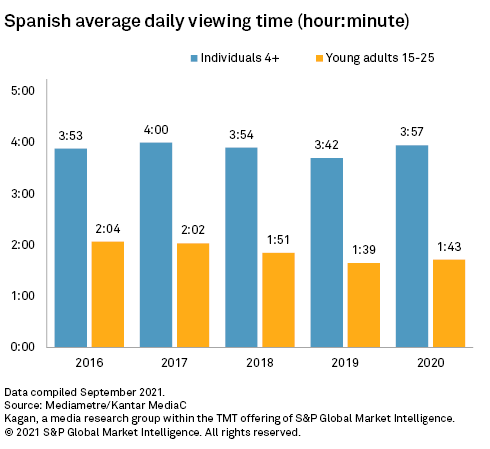 Events and reality television made up the bulk of Spain's most popular broadcasts in 2020. New Year's Eve 2020 programming "Campanadas de Fin de Año" and "Feliz 2021" were the most popular of the year.

Average viewing times in the Netherlands grew by 2.6% year on year, one of the smallest increases among the major markets in 2020. Like the U.K. and Germany, young audiences in the Netherlands continued to decline and were down 6.3% year on year in 2020. The most-watched channels in 2020 were the generalist channel groups NPO, RTL Nederland BV and SBS as well as Veronica and Net 5 from Talpa Holding NV. 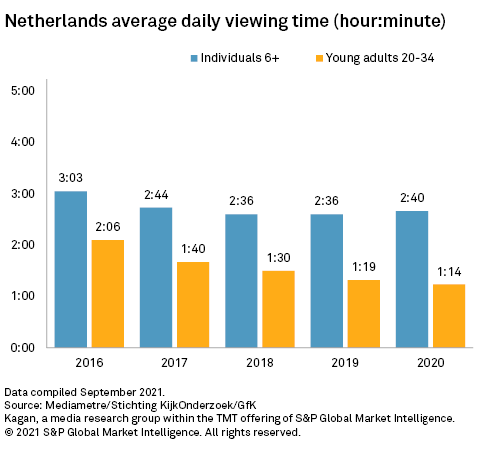