Unlocking the Full Potential of Earnings Transcripts with Kensho NERD

Enterprises are missing out by not optimizing cloud spending, not going multicloud

Flooding in Japan from Typhoon Hagibis in October 2019 destroyed a third of East Japan Railway (JR) Company’s[1] fleet of futuristic bullet trains on the Jōetsu Shinkansen high-speed line connecting Tokyo and Niigata. This resulted in a loss of approximately $300 million U.S.[2]

It is almost impossible to avoid disasters of this scale in today’s environment. That being the case, assessing asset vulnerability should be a responsibility that each company takes seriously in order to help avoid costly damage to company resources and a negative impact on financial results. According to the U.S. Climate Resilience Toolkit,[3] there are three steps that can be taken to assist with resilience:

1. Evaluate potential climate impacts on your assets.
2. Assess each asset’s vulnerability.
3. Estimate the risk to each asset.

To assist with this, Weather Source data available via Snowflake on the S&P Global Marketplace enables quantitative evaluations of various weather events on operating/physical assets. This helps users calculate both the likelihood of catastrophic weather events, as well as the severity of the damage each weather event may cause on 5.9 million global postal codes over 170 countries, including 40,000+ U.S. ZIP codes. Both daily and hourly historical data is available as far back as 2000, with statistical averages, minimums, maximums, and standard deviations. Weather Source also provides 15-day forecast data, refreshed four times a day.

According to Weather Source data, JR East Nagano Train Yard receives less than half an inch of daily rainfall, on average, during most of the year (see the orange line in Figure 1). However, this location had recorded 4.7 inches of rainfall on October 12, 2019 (circled) from historic Typhoon Hagibis. 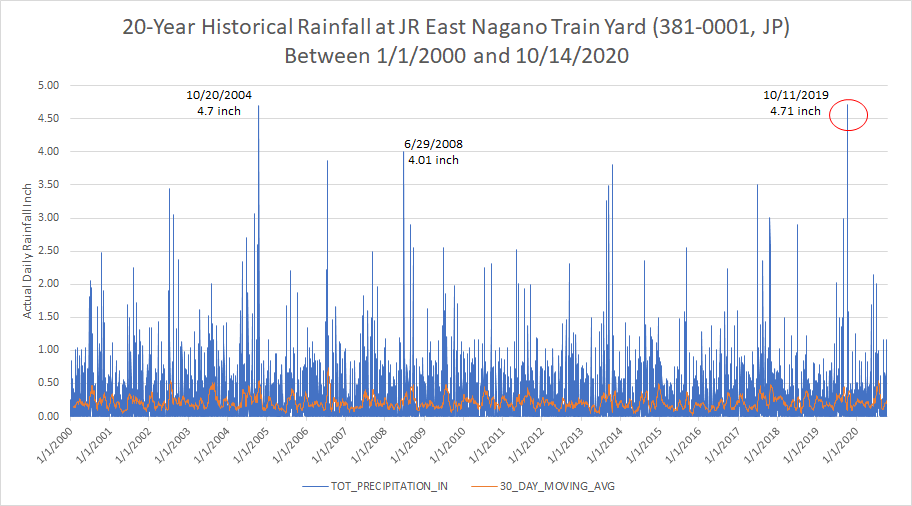 Looking back over 20 years, there were at least three occurrences when this area recorded more than four inches of rain in one day. The nearby Chikuma River, the longest and widest in Japan, has also been known to flood from time to time, given the mountainous landscapes it weaves through before entering the Japan Sea. Since its levee had also broken many times in the past, flooding events were highly likely in this area.

Weather Source also provides rainfall impact information (rainfall inch per hour) to measure the pattern of severe rainfall. Figure 2 identifies the highest rainfall each season (winter, spring, summer, and fall) and trends for the last 20 years. The dotted lines are the trend lines based on the highest rainfall in each season in order to identify significant outlier events each year that tend to result in natural disasters. 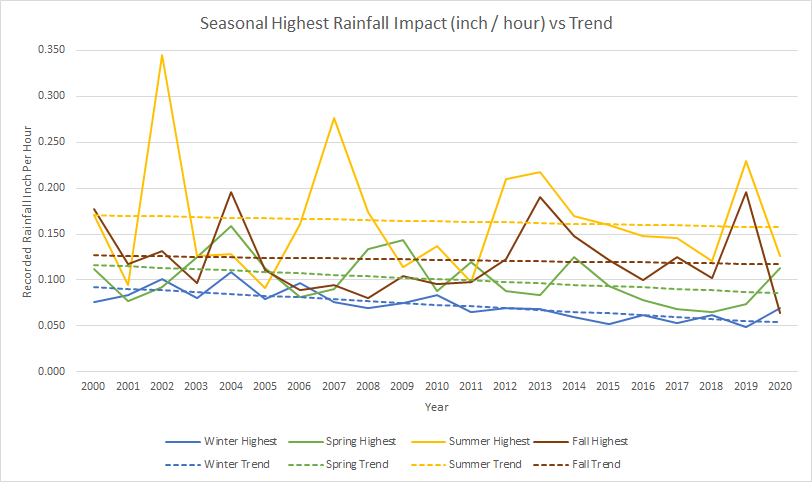 Combining the historical rain pattern with the increasing volatility of the severe rainfall impact, JR East could have considered building a more resilient infrastructure in this area, which may have helped to avoid the $300 million loss to its trains.

3. Estimate the Risk to Each Asset

Examining Typhoon Hagibis through the lens of climatology data from Weather Source, precipitation history tells the likelihood of rain and the severity of each rainfall event. Weather Source also provides the statistical standard deviations in its Climatology data package that indicates the potential swing from the averages of each weather event throughout the year. As shown in Figure 3, Typhoon Hagibis hit Japan on the 285th day of the year, the same day of the highest standard deviation calculated by Weather Source back in 2017.

An additional factor in calculating the potential impact on the company’s train assets is the river’s discharge rate at this specific location where flooding is common. Successive and sustained rainfall will have a compounding impact and stress on the levee system. Given its mountainous location, a heavy rainfall also increases the water discharges from many tributaries in this river system. Figure 4 simulates the prolonged rainfall with a hypothetical three-day (orange) and five-day (purple) discharge rate over the observed rainfall (blue) to show the compounding effect of successive and sustained rainfall. It is possible that repeated rainfall preceding October 12, 2019 may have already weaken the integrity of the levee system in this area. 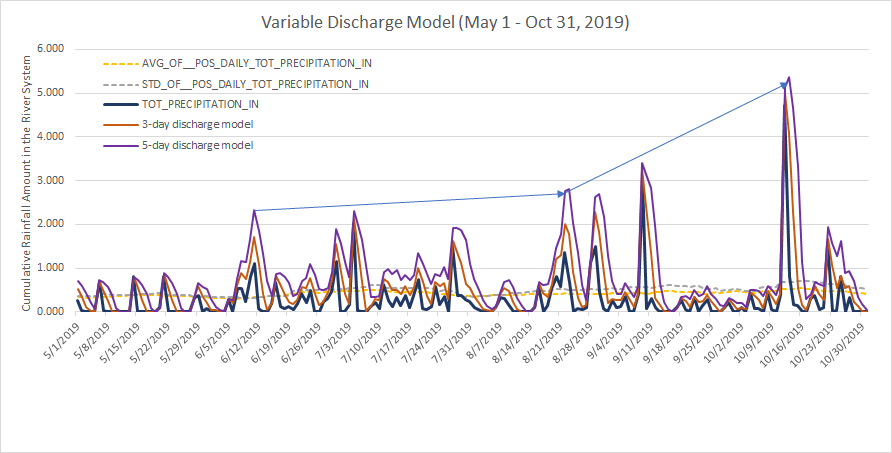 Lastly, observing the forecast is important when considering weather and its potential impacts. Weather Source provides 15-day daily forecasts for all locations, shown in Figure 5, which aligns with local forecasts to help understand what the future may hold. 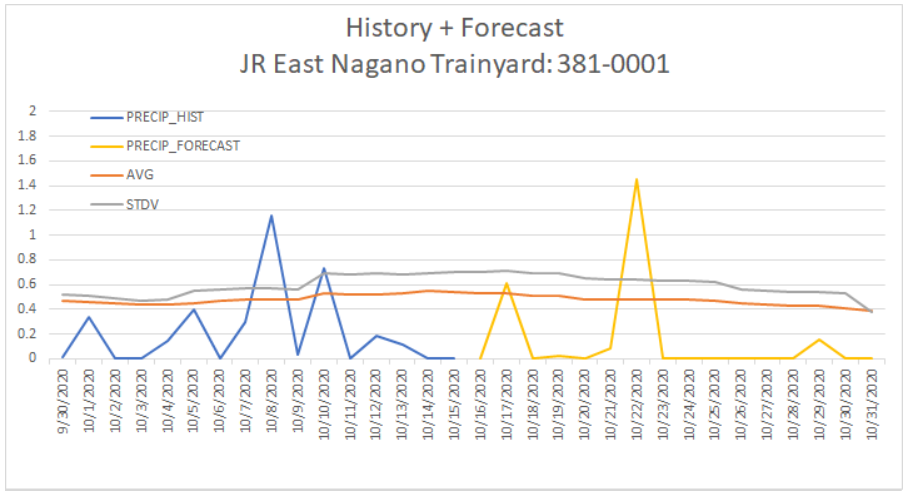 In summary, although past events are not always indicative of future events, scientific studies indicate that extreme weather events, such as heat waves and large storms, are likely to become more frequent or more intense with human-induced climate change. It is becoming critical to understand the potential impact on corporate assets around the world. S&P Global Market Intelligence users can take advantage of the Weather Source global climate dataset in order to help: 1) evaluate potential climate impacts on assets, 2) assess each asset’s vulnerability, and 3) estimate the risk to each asset, in order to minimize the impact from costly climate-related disasters.

For more information on Weather Source and how this comprehensive data can help with your analysis, please visit the S&P Global Marketplace.