FOX News Opinions May Resonate With Viewers, But Not With Some Advertisers


FOX News Opinions May Resonate With Viewers, But Not With Some Advertisers

Recent opinionating by influential news anchors at FOX News Channel (US), some via Twitter Inc., may have backfired, with a number of major advertisers potentially abandoning the channel. This risk has contributed to a reduction in our estimates for advertising on the channel in 2020. We now expect FOX News ad revenue to be off by more than 15% this year to $1.07 billion. This decline includes a previous downgrade for issues associated with the COVID-19 pandemic. 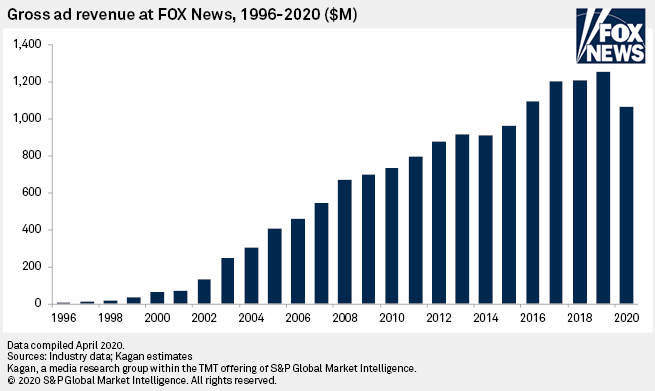 Kagan estimates FOX News margins to compress by about 180 basis points as a reduction in programming costs offsets some of the impacts of the revenue downturn.

FOX News has been one of the few cable networks that have not been forced to fill commercial breaks with myriad public service announcements, or PSAs. In addition to traditional advertisements, the channel has turned to direct response advertising, ads that typically appear in the middle of the night and that sell for a fraction of the cost for a traditional 30-second spot.

However, major advertisers may turn on FOX News, disagreeing with some of its coverage over the coronavirus pandemic. Many of the top FOX News anchors took President Donald Trump's lead in the early days of the coronavirus outbreak, downplaying how serious it would become. FOX News hosts Sean Hannity, Laura Ingraham and Jeanine Pirro have all faced criticism for their news coverage, which has caused a backlash among advertisers, according to a reporter from  The Hollywood Reporter, who spoke with some FOX News employees. "While the anchors were on air calling the whole thing a hoax to impeach the president, we were having daily meetings on how to prepare for a 9/11-like scenario and how we'd stay on air," an anonymous FOX News employee told THR.

"Everyone's dumping all over Fox anchors, and rightly so, for not taking this seriously," another FOX News employee told THR.

In addition to controversy over the coronavirus coverage, Ingraham earlier came under fire for attacking David Hogg, a teenager who survived the 2018 shooting at Marjory Stoneman Douglas High School in Parkland, Fla. With other survivors of the school shooting, he founded the gun-control advocacy group Never Again MSD.

On March 28, 2018, reacting to an article in which Hogg talked about being rejected from several colleges, Ingraham said he was whining about it.

David Hogg Rejected By Four Colleges To Which He Applied and whines about it. (Dinged by UCLA with a 4.1 GPA...totally predictable given acceptance rates.) https://www.dailywire.com/news/28770/gun-rights-provocateur-david-hogg-rejected-four-joseph-curl …

David Hogg, a self-appointed spokesman for a generation, revealed on Tuesday that four universities he has applied to have rejected his application. The Florida high school student, a survivor of the...

48K people are talking about this

Hogg, who responded to Ingraham via Twitter, called on advertisers to boycott FOX News and bail on the anchor's prime-time show. Many advertisers said they would do so.

Pick a number 1-12 contact the company next to that #

69.6K people are talking about this

The following eight advertisers responded immediately with a pledge to pull all advertising, according to The New York Times:

A ninth, Expedia Group Inc., said it had pulled ads but would not attribute this decision directly to Laura Ingraham, according to The New York Times.

Ingraham issued an apology on March 29, 2018, but it appeared to be too little, too late.

Both TV news and Twitter have become powerful tools, and engagement with both has soared with many people staying at home. Users with large followings need to remember that having strong opinions on some issues may turn off advertisers. In this current economic slump, advertisers are extremely sensitive to being associated with brands that appear unsympathetic.