Facebook's ambitious plan of linking consumers and merchants through its popular WhatsApp platform in emerging markets hinges on the expansion of its payments services. It needs regulatory blessings and strategic partnerships, but even a successful payments push may not contribute much to the bottom line.

The social network is building out a payments infrastructure around the world to position its four popular digital platforms — Facebook, Messenger, Instagram and WhatsApp — as ways for people to send money to each other and to shop for goods and services. Keeping the user within its digital ecosystem through the entire shopping journey requires deep integrations with merchants and payment intermediaries.

Facebook Shops and WhatsApp Business accounts aim to attract businesses to sell their wares on their digital platforms. PayPal and Stripe already support payments on Facebook and Messenger in the U.S. Outside the U.S., the social media company has either rolled out or is launching Facebook payments in at least 36 countries. It has similar plans to offer payments on Messenger, Instagram and WhatsApp around the world.

Of the four platforms, WhatsApp could make the biggest dent in digital payments, due in large part to its popularity in emerging markets, where most people still deal in cash and buy from mom-and-pop stores. India, Indonesia, Brazil and Mexico could be key to the WhatsApp-led push in digital payments as the majority of their combined $2.259 trillion of retail sales happened offline in 2019, according to 451 Research, part of S&P Global Market Intelligence. WhatsApp has the potential to facilitate remittances in India, Mexico and the Philippines; the three countries received more than $157 billion in aggregate inbound remittances in 2019, according to World Bank estimates. 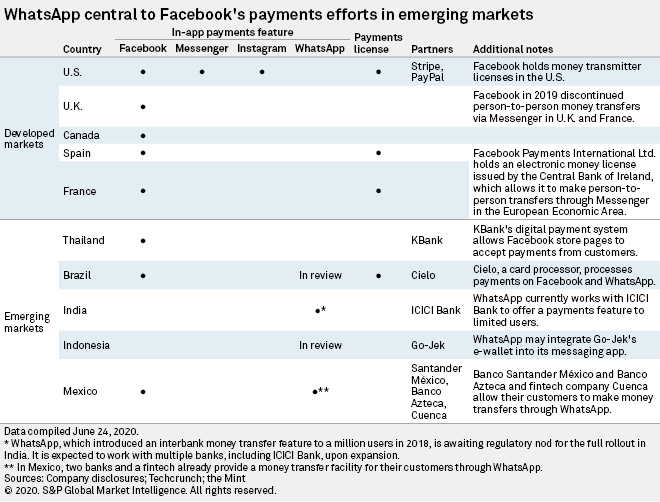 Facebook may have to subsidize payments to propel advertising revenues

WhatsApp already enables businesses to engage through a medium familiar to consumers.

Many companies across industries use WhatsApp Business application programming interfaces to provide customer support and even process digital payments through dynamically generated payments links shared through the messaging app. Businesses can create ads across Facebook and Instagram that link to WhatsApp, where customers can ask questions about products. Small merchants can use WhatsApp catalogs to showcase and share products with customers. The provision of payments within the app, however, makes it easier to close out a transaction in the aforementioned scenarios.

Facebook has already laid the groundwork to make money from WhatsApp in two ways. Companies using WhatsApp Business APIs can respond to customer messages for free for up to 24 hours, after which they will have to pay a fee per message. Click-to-WhatsApp advertisements sold to businesses are another source of revenue. These monetization efforts resemble the strategies of Chinese social network Tencent, which provides a myriad of services with an integrated payment solution through its WeChat app.

Offering WhatsApp payments will open up another revenue opportunity, but it is unlikely to be a profitable one. Consumer-facing payment fintechs have small margins in emerging markets, such as India and China, due to the low transaction take rate, which is the fee charged to facilitate a payment as a percentage of transaction value. 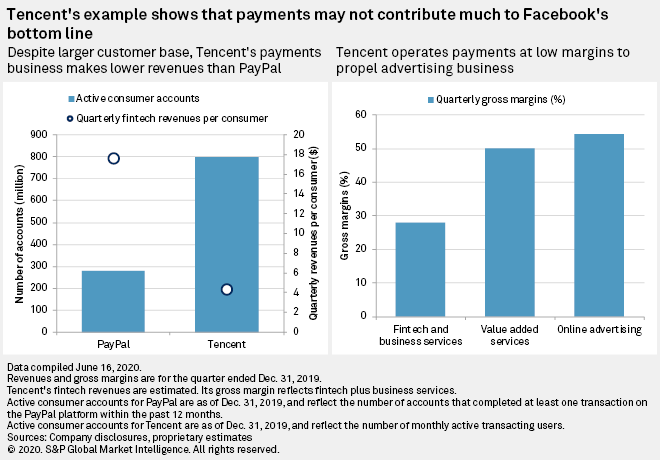 As small businesses are often averse to paying a merchant discount rate, payment fintechs either keep transaction charges low or absorb them to make money from other services provided to merchants and consumers. Tencent, for example, operates its payments business at low margins so that it can encourage both consumers and merchants to transact with WeChat Pay. It has built a high-frequency platform by cultivating transactional habits among its users. A Tencent mobile payment user made 113 transactions on average in the fourth quarter of 2019, compared to only 12 transactions per PayPal account during the same period.

Still, Tencent's extremely low transaction take rates meant that it generated less revenue than PayPal. Tencent saw fourth-quarter 2019 fintech revenues of $3.50 billion on the back of $4.326 trillion in processed transaction value, according to our estimates. By comparison, PayPal's $4.96 billion in revenues came off only $199.40 billion in processed transactions. After adjusting for payment processing charges and other operating expenses, Tencent's payments business is, at best, breaking even.

The payments platform, however, fuels a virtuous cycle of commercial activity in Tencent's ecosystem, which leads to higher advertising revenues. Facebook's vision for payments is similar, in that it sees payments as an integral part of its e-commerce infrastructure necessary to drive higher conversion rates. The U.S. social network hopes to command higher ad rates and sell more ads.

But Facebook's ambition is limited in scope compared to Tencent's. Building a Tencent-like closed digital framework would need both proprietary investments and partnerships across payments, gaming, content, e-commerce and other on-demand services. Facebook's plans for WhatsApp — limited to conversations, commerce and payments — reflect the constraints of having its user base spread across multiple countries.

Facebook cannot hope to replicate the proprietary digital payment platform of Tencent. Operating a closed-loop system can be very expensive as Tencent bears the card processing costs when users fund their wallets, but it gives Tencent control over the service of completing payments and discretion in adjusting the payment fee.

Closed-loop payments systems providing value storage are subject to greater regulation, and getting necessary licenses in the multiple countries where Facebook operates could be a tall order. 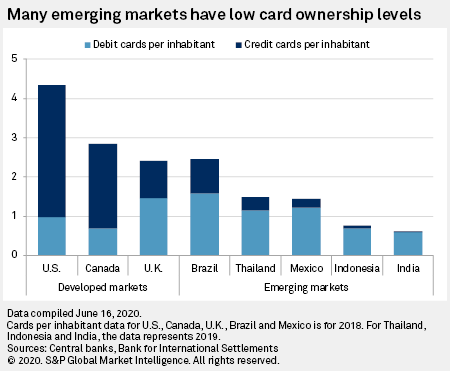 WhatsApp payments in India will run on the Unified Payments Interface, or UPI, a real-time payments system that facilitates transfers between bank accounts, subject to regulatory approval. In Indonesia, the messaging app will likely embed a stored-value electronic money account, which requires people to load funds before they can start transacting. In these two Asian countries with low card ownership, interbank transfers and e-money payments are the go-to payment instruments. Card payments will be the first choice in Brazil, whereas alternative payment methods could be added in Mexico and Thailand.

Regulators in two of WhatsApp's biggest markets, India and Brazil, do not yet appear to be on board with the messaging app's plans to enter payments.

Facebook is currently embroiled in a lawsuit that seeks to ban WhatsApp from launching payments over allegations that embedding the UPI feature in the messaging app violates the central bank's laws requiring payment companies to store and process data within India. While the social network noted in its response that it is already in compliance with the Reserve Bank of India's data localization rules, according to The Times of India, it is not clear whether a full-scale rollout of the UPI feature integration will happen any time soon.

In Brazil, the company's partnership with card processor Cielo is under review of regulators, which suspended WhatsApp payments within a few days of the launch, citing anticompetitive concerns, according to Reuters.

Regulatory issues could also arise in other markets, but some clever collaborations, such as Facebook achieved in recent months, could do the trick to some extent.

Partnerships key to building e-commerce and payments in India

Facebook has invested about $5.7 billion for a nearly 10% stake in Jio Platforms, a telecommunications business owned by Reliance Industries, which wants to leverage WhatsApp's reach to build an e-commerce venture. The partnership aims to have JioMart integrated into WhatsApp and allow consumers to use the messaging app for ordering groceries from neighborhood shops and making payments.

By piggybacking on India's most popular messaging app, JioMart could gain a quick foothold in the country's extremely competitive e-commerce space. The deal appears to reflect the value of integration with WhatsApp as Facebook managed to invest at a relatively lower valuation than the investment firms that acquired stakes in Jio Platforms along with the social network over the past couple of months. We estimate that a financial investor would have had to shell out at least $700 million more for the same size stake purchased by Facebook.

The deal creates options for its payments strategies. WhatsApp teamed up with ICICI Bank Ltd. for its beta testing of UPI payments. It will work with multiple banks on a full rollout and can choose Jio Platforms' payments bank affiliate, Jio Payments Bank Ltd., as a partner bank to access the payments infrastructure.

Collaborations with e-wallets in Southeast Asia

Facebook's undisclosed investment in ride-hailing service Go-Jek could pave the way for integrating the popular GoPay wallet into its messaging app in Indonesia, which does not allow companies with foreign ownership of more than 49% to operate electronic money. The investment was particularly meant to inject funds into the GoPay fintech business, in which Facebook now owns a 2.4% stake, according to Reuters.

Clever collaborations with domestic payment fintechs that allow unlicensed consumer technology companies to introduce an in-app payment feature have become a norm in Indonesia and other Southeast Asian countries. Regional ride-hailing platform Grab and e-commerce firm Tokopedia have teamed up with fintech company OVO to offer payments in Indonesia. Grab's partnerships with Kasikornbank in Thailand and fintech company Moca in Vietnam are other examples. These arrangements in Southeast Asia often involve one party buying a stake in another.

Go-Jek's coins.ph subsidiary in the Philippines could be a potential e-wallet partner should WhatsApp decide to introduce payments there.

Several Asian and Latin American countries are either already adopting real-time payments or considering implementing them. Facebook could potentially seek to leverage interbank transfers that bypass card rails to lower merchant costs and reduce the working capital needs of businesses through the instant collection of payments.

In India, it hopes to build services on top of UPI instant payments. Seeking bank partnerships in Singapore, Malaysia and Thailand could allow it to tap into their centralized payments infrastructures. Mexico and Brazil are implementing similar schemes. Central banks are increasingly mulling allowing nonbanks to take part in these schemes, but at present few of them provide nonbanks with direct or indirect access to the infrastructure. India's growing success with mobile payment adoption by creating a role for nonbanks in its payments scheme could inspire other developing countries to emulate it.

In the meantime, Facebook will likely offer existing popular payment options in some of these countries. In Thailand, its ties with KBank allow Facebook business account users to accept in-app bank transfers and card payments. While there has been no announcement yet, Facebook could potentially extend its KBank partnership to WhatsApp payments in the country.

It is not clear when WhatsApp payments will be rolled out in Mexico, but the messaging app is already facilitating money transfers and bill payments for two banks and a fintech company.