Climate Related Considerations In The Metals And Mining Sector

The mining sector has made significant strides in reducing its environmental impacts in recent years. In 2019, we saw several major mining companies committing to increase the use of renewable energy at their mine sites. The use of dry ore processing, a method that significantly reduces water consumption, has been on the rise. Yet the mining sector remains a significant consumer of energy. The sector consumes 1.25% of the world’s total energy, equivalent to the annual energy consumption of Spain[1]. Four metals: aluminium, copper, gold and iron, account for 2% of global industrial greenhouse gas (GHG) emissions[2].

As countries gear up for the climate negotiations in Glasgow later this year, they are likely to ratchet up their commitments to reducing GHG emissions. An accelerated low-carbon transition presents both opportunities and risks for the mining sector. A faster shift to a greener world means increased demand for renewable technologies such as electric vehicles, solar panels and battery storage systems, all of which require vast amounts of metals to produce. However, stricter climate regulations such as carbon pricing schemes could raise operating costs for businesses and affect their bottom lines.

If countries around the world implement policies that are in line with the ambitions set out in the Paris Agreement, to limit global temperature rise to well below two degrees Celsius, carbon emissions would need to be priced at a much higher level than they are today. Trucost’s research shows that across 1,418 mining assets in 56 different countries, nearly a third will be exposed to an increase in carbon price upwards of $100 per tonne of CO2e in 2030, four times the current carbon price of the EU’s Emissions Trading Scheme.

Carbon pricing risk at the mine level is a function of the carbon price at the location of the mine and the GHG intensity of the mining asset itself. Trucost has reviewed emissions data disclosed by 93 gold mines across 31 different countries, and it reveals that mines in South Africa have the highest GHG intensity per unit of ore treated. For example, the GHG intensity of gold mines in the country is three times higher than those located in Russia and 23 times higher than those located in the US. Although mines in South Africa are likely to be exposed to lower carbon prices than their US counterparts, operating costs for these mines could increase by 23% if stringent carbon pricing policies are implemented by 2025. By the same token, US gold mines could face an increase of 5% in operating costs. To mitigate this risk, miners should consider measures to reduce their GHG emissions, such as using more energy-efficient equipment, electrification of mining processes and increasing the use of renewable energy. These measures could also help hedge against volatility in fossil fuel prices.

Figure 1 Increase in mine site costs (labour, fuel and electricity cost at mine and mill) from unpriced carbon risk – 2025 (High carbon price scenario) 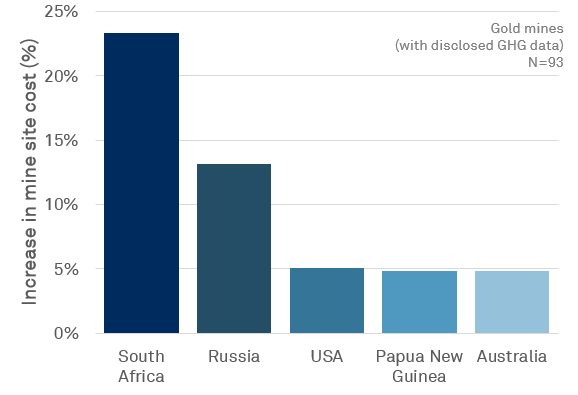 About a fifth of all mines analysed by Trucost are located in areas of extreme water stress, where the level of water consumption is above 80% of all available water in the area. Iron ore mines have the highest exposure to water risk, with 30% of the mines exposed to water stress, mainly mines located in Chile, Peru, and China. Water is an important input to mining operations and mines located in water stressed areas are likely to experience disruption during prolonged periods of drought.

Trucost analysis also found that 27% of mines are located in areas where water risk will increase between now and 2030, under a business-as-usual scenario. For example, the water risk of about a third of the gold and copper mines is expected to double by 2030. Increases in water risk are driven by the depletion of water tables, changing weather patterns or increases in demand. These mines are likely to be exposed to higher water costs, either in the form of increased extraction costs or water tariffs.

Climate-related risk is coming under the spotlight of investors

S&P Global Market Intelligence data shows a 1,200% increase in mentions of specific environmental and social issues in company earnings calls between 2017 and 2018, drought being the issue with the largest increase[3]. An advocacy group calling for more transparency on climate-related financial risks including carbon pricing risks has garnered support from companies and financial institutions representing a market capitalization of over $12 trillion[4].

To manage the risk of unexpected shocks, energy-intensive sectors that are dependent on the use of natural resources need analytical tools to help them understand their exposure to the unpriced risks of climate change and integrate them into their decision-making processes.

Learn how you can gain visibility into the climate competitiveness of mines to get ahead in the transition to a low-carbon future.