Mobile users in Asia-Pacific are warming up to the idea of doing multiple, often seemingly unrelated functions, with just a single "super app."

It is common for single-function apps to start with mobile money before branching out to other services, just as WeChat did with WeChat Pay in China.

Although the idea of super apps is not novel to Western companies, factors such as anti-trust regulation, privacy and cultural differences shed some doubt on the success of super apps in North America and Europe.

Tencent Holdings Ltd.'s WeChat is a classic example of a super app. Aside from its basic function of sending messages, WeChat can also be used to order food, hail taxis and book plane tickets — not because Tencent offers these services, but because it allows third-party companies to create apps within WeChat.

Officially called Mini Programs in China, these "apps within an app" allow mobile users to use services of third-party companies without downloading separate apps. WeChat now acts like its own operating system, as its Mini-Program inventory of over 1 million as of November 2018 rivals Apple Inc.'s 2.2 million iOS apps and Google LLC's 3.3 million Android apps. 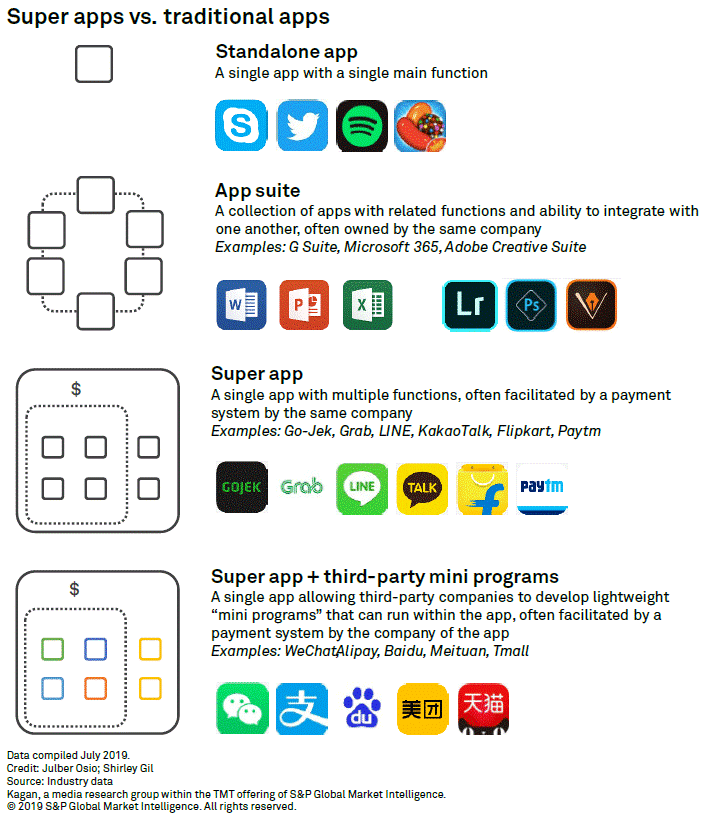 Integral to the success of WeChat and Alipay's Mini Programs are the native mobile payments systems WeChat Pay and Alipay. These in-app mobile payment systems allowed Tencent and Ant Financial to ink partnerships with various businesses and merchants to develop more use cases for the app.

Wave Money CEO Brad Jones said in a panel at MWC Shanghai 2019 that it is common for single-function apps to start with mobile money before branching out to other services. "When you add mobile money, you open up more monetization opportunities," according to Jones.

Japan's LINE and South Korea's KakaoTalk both started out as messaging apps, not as mobile payment apps. Both eventually branched out to other services including LINE Pay in December 2014 and KakaoPay in September 2014.

Indonesia's GO-JEK and Singapore's Grab — the biggest super apps in Southeast Asia — follow this model of developing their own services and packaging all of them in one app. Initially starting as ride-hailing apps, Go-Jek and Grab expanded their own branded services — such as Go-Send, Go-Massage, Grab Food and Grab Pet — through their mobile payments systems Go-Pay and GrabPay.

India is another hot spot for super apps, where companies such as Paytm Mobile Solutions Pvt. Ltd. and Flipkart India Private Ltd.dominate the scene. Reliance Jio Infocomm Ltd., the disruptive mobile operator that redefined India's mobile landscape through its 4G offerings, is also set to launch its own super app with over 100 services.

Are super apps an Asia-Pacific-only phenomenon?

For most emerging markets in the Asia-Pacific region, including China, people access the internet primarily through their mobile phones. As smartphone penetration grew alongside mobile internet penetration, mobile phones developed more use cases and became more embedded in people's daily lives. Connectivity-based solutions focused on mobile phones as the main platform. This "mobile-first" culture meant that app developers had to find a way to capture a variety of services in the simplest way possible.

In most developed countries, widespread internet availability preceded smartphone adoption, which meant connectivity-based solutions were first developed on other platforms, such as computers. This culture of using dedicated software to perform specific tasks was carried on to the era of smartphone apps.

Still, the idea of super apps is not novel to Western companies. As early as May 2016, Google revealed Android Instant Apps, which allows users to access third-party content through a simple Google search. Similarly, Facebook Inc. introduced Instant Games in November 2016, allowing users to play a light version of third-party games through the Messenger app.

However, these features never took center stage the same way WeChat's mini-programs did. Super apps succeeded in China because they are sheltered in a market where foreign competitors like Google and Facebook are blocked by the government. Tencent and Ant Financial sought to fill the vacuum left by these giants through an aggressive series of acquisitions and partnerships with local companies — something that might raise red flags for antitrust regulators in North America and Europe.

Privacy is another issue that is more pronounced and regulated in the West compared to the Asia-Pacific region. Incorporating multiple services in one app raises concerns about handling, storage and use of personal data, for which Facebook and Google are already under scrutiny.

Cultural differences are also huge deterrents to the super app model on a global scale. Super apps work in pocketed regions of China, India and Southeast Asia because of relatively similar cultures within each sub-region. Uber Technologies Inc. acknowledged this problem as it expanded to emerging markets. Its solution was not to incorporate more functions in its app, but to break it into separate, less cluttered apps such as Uber Lite in India and Uber Bus in Egypt.

Nonetheless, Western companies seem keen on experimenting with the super app model. In May 2019, Facebook announced it would blend the functions of the Facebook app, Messenger, WhatsApp and Instagram to create a super app. In the same month, Google said it was testing its mini-apps feature in the Search and Google Assistant apps.