Industry leaders and experts at this year's Philippines in View event are confident that the country’s pay-TV and broadband will reach greater heights moving forward. Held on May 18, the virtual conference organized by the Asia Video Industry Association, or AVIA, highlighted the triumphs and hurdles operators faced in meeting customer needs amid the COVID-19 pandemic and ABS-CBN Corp.'s mandated shutdown.

With its continuously growing pay-TV subscriber base, the Philippines appears as one of the outliers in the face of cord-cutting in the Asia-Pacific region. Low broadband penetration as well as lack of access to affordable and quality internet connection hinder majority of the population to use streaming as a means of entertainment, which usually happens in markets with declining pay-TV subscribers. According to Kagan estimates, the Philippines ranks next to Indonesia as the market with the largest pay-TV subscriber CAGR for the next five years.

SES Market Development Director John Huddle noted that direct-to-home's affordable prepaid model and the ability to reach rural areas provide DTH operators with significant headroom for growth. Regional cable operators also flourished in their own target areas due to the absence of a major cable infrastructure that can fully provide coverage to more than 7,000 islands of the archipelago. Timothy Bautista, vice president and COO of Cable Boss, sees an opportunity to leverage other content once international pay TV channels start leaving the linear space. This will make way for upcoming channels with different genres to be included in their cable portfolio, just waiting for a chance to air and compete. In the words of Bautista, the breathtaking pace of cable TV's disruption is meant to not only survive but to thrive. Huddle echoed the same sentiment and added that replacing international channels with local content will yield lower average revenue per user, making it more affordable to the Philippine market.

ABS-CBN's network closure highlighted the importance of local content to Filipino households. Following the cease-and-desist order, ABS-CBN launched the Kapamilya Channel on pay TV platforms. The opportunity to continue watching ABS-CBN content, coupled with the increasing availability of affordable pay TV plans, attracted loyal patrons of the network to a paid subscription for content that they used to access for free.

While the success of other media companies is not dependent on ABS-CBN's shutdown alone, losing one of the major market players served as a catalyst for pay TV and free-to-air businesses to have a significant slice of ABS-CBN's former share of the pie. GMA Network Inc.'s DTT decoder Affordabox launched in June 2020 reached more one million units sold in seven months, which could have balanced the DTT sales loss from ABS-CBN's TV Plus box. Since its launch in 2015, ABS-CBN's TV Plus has been instrumental in bridging the digital broadcast divide in the Philippines, enabling almost half of the country’s television households to watch digital channels using the box.

As a media business powerhouse, PLDT Inc. holds multiple assets across the video industry such as TV5 Network Inc. and Cignal TV Inc. Cignal reached the 3 million subscriber mark in November 2020 while TV5 viewership grew dramatically after ABS-CBN's SkyDirect and network shutdown. Manuel Pangilinan, chairman, president and CEO of PLDT recognized that it would have been difficult for the media conglomerate to develop its current market presence had ABS-CBN stayed in business. He also shared an anecdote about TV5 formerly being the "undisputed No. 3" as there was always the question of which was the No. 1 network between ABS-CBN and GMA. Despite having joint ventures with ABS-CBN through block timing shows, Pangilinan said that they are still working on their own content as it gives product differentiation and exclusivity, as well as the capability to replicate content across all platforms.

Despite the rise of pay TV, the consensus is that FTA will remain a household staple as majority of the population composed of lower-income households relies on free content for news and entertainment. The problem, however, lies in the fact that a large portion of the television households are still using analog television amid the planned analog switch off by 2023. Arnold Atienza, undersecretary of the Department of Information and Communications Technology, outlined the department's plan to promote digital terrestrial television this year and distribute DTT boxes to households by 2022 if Congress approves the requested budget.

Quarter-over-quarter growth for PLDT and Globe peaked during the second quarter of 2020 as the government started imposing strict lockdown measures, while Converge's 2020 sequential growth peaked during the third quarter due to lockdown extensions and most activities transitioning online. As a relatively new market entrant, Converge has been enjoying high quarterly growth as it builds its subscriber base, but the pandemic allowed the company to further explore untapped markets. 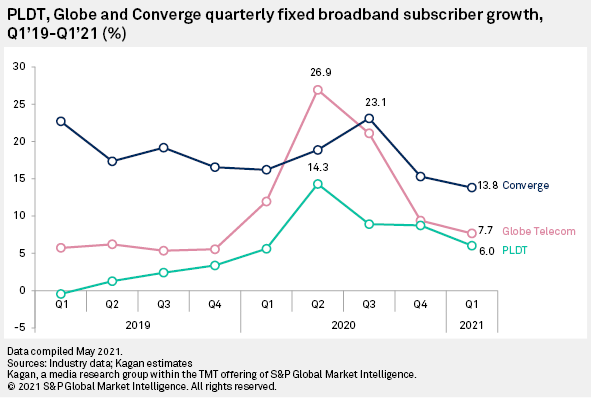 The pandemic has also driven cable broadband demand upward in rural areas not serviced by major providers. Philippine Cable Telecommunications Association President Joel Dabao pointed out that the work from home set-up enabled a large chunk of the working population to move out of Metro Manila and go back to their provinces, hence the increased demand for cable operators present in rural areas to provide bundled cable broadband services.

Dennis Anthony Uy, founder and CEO of Converge, said the country's fixed broadband landscape is still a blue ocean market in terms of quality and speed. Converge aims to address this by offering the Fiber X Time of day package, a cost-effective approach wherein subscribers can get twice the regular speed at a lower price for as long as 12 hours a day during their chosen period. Customers can choose to apply the speed boost during the day or the night, depending on when they require faster broadband connection.

Uy also does not see the absence of a telco aspect to his business as a disadvantage. According to him, while 5G's mobility is useful, telcos still need to consider weather destabilization and tower density, whereas fiber is better in terms of reliability and stability. Fiber also offers more capacity, especially during the pandemic where everyone is doing everything from home.

Ernest Cu, president and CEO of Globe, stressed that incubation of new ideas and diversification are some important keys to avoid commoditization. Globe shifted from primarily offering telco services to exploring new fields such as entertainment, fintech, e-commerce and telemedicine. Fresh ideas from Globe's venture capital arm 917Ventures also ensure that the company will always find more ways to innovate. "If we don't disrupt the market, somebody else will," he added.

Global Multichannel is a service of Kagan, a group within S&P Global Market Intelligence's TMT offering. Clients may access the full article along with the Philippines’ broadband and pay TV data by clicking here.

To learn more about our TMT (Technology, Media & Telecommunications)