Amid the backdrop of the COVID-19 pandemic, industry leaders advocated for greater inclusion of satellite services in the global 5G ecosystem at the Asia Video Industry Association's Satellite Industry Forum, held virtually Sept. 24-25. Historically the most expensive broadband option, satellites are still critical for remote countryside and mid-ocean connectivity.

AVIA opened the summit by presenting a joint report it released together with EMEA Satellite Operators Association, or ESOA, about the role of satellites in 5G. AVIA and ESOA's thesis is that satellites will bridge the blind spots in traditional terrestrial networks, bringing connectivity — including 5G — to more people.

ESOA Secretary General Aarti Holla-Maini made a bold statement saying that cost, not spectrum, was really the solution to rapid 5G rollouts. Holla-Maini explained that although the best 5G performance is achieved in millimeter wave, or mmWave, networks, mobile operators are hesitant to use mmWave spectrum for deployment because its poor propagation characteristics require a lot of towers, and therefore, money. The popular option is to move to low bands, but these bands are not allocated yet by most regulators in most countries. Holla-Maini proposed satellites as a cost-effective solution to 5G's coverage woes.

Using satellites to augment terrestrial networks is not new. Telstra Corp. Ltd. uses satellites to cover Australia's vast, sparsely populated Outback. The Maldives and most Pacific island nations rely primarily on satellite for their connectivity because tower and submarine cables are both expensive.

Click here for a broad overview of satellites and other nonterrestrial networks (clients only).

Satellites are popularly known to be inadequate for some use cases, such as high data throughput video streaming. Holla-Maini countered this by citing a recent report published by Sandvine Corp. highlighting various use cases serviced by satellite networks during the COVID-19 pandemic. In the report, the top use cases in satellite networks in terms of total traffic share are everyday general activities such as social media use through Facebook, WhatsApp and Instagram and video streaming through YouTube or Netflix.

These results dispel any "myths" about satellite not being good for data delivery or video streaming, according to Holla-Maini. "When used, satellite is as good as any other platform," she said. 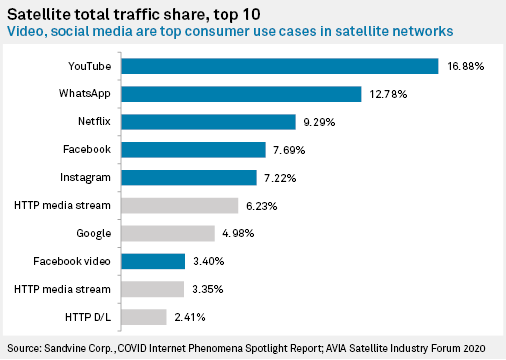 The COVID-19 pandemic only highlighted the importance of having resilient networks, especially for 5G. Satellites, being unaffected by the disasters that terrestrial networks are vulnerable to, such as typhoons and earthquakes, provide this ingredient of resiliency on new generation networks. Holla-Maini mentioned that satellites helped immediately restore connectivity in Vanuatu when a severe tropical cyclone wrecked terrestrial connectivity in April 2020.

To summarize the discussions, panelists said that satellite can contribute to all three 5G scenarios:

* Enhanced Mobile Broadband (EMBB): Satellites have been providing backhaul for four generations of mobile technology and 5G is no exception. As discussed earlier, satellites can support high data throughput applications such as video streaming.

* Ultra-reliable and Low Latency Communications (URLLC): Panelists argued that edge computing brings networks closer to the end user and effectively cutting latency. Although the benefit is indirect, the role of satellites is distributing content to these edge networks, which will then deliver low latency to end users. 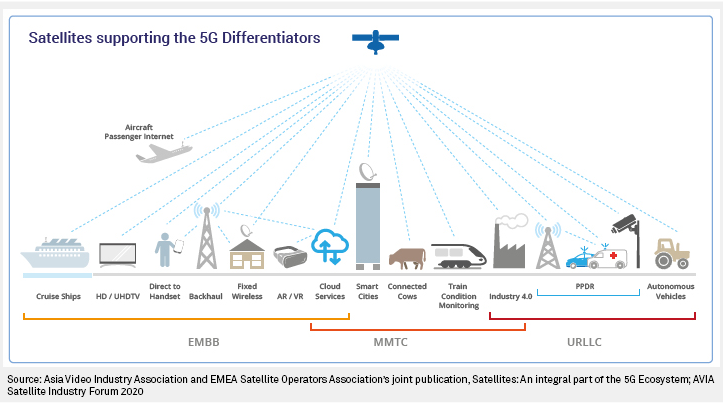 However, Holla-Maini raised the point that the mobile industry has been encroaching on the spectrum territories of satellite services in recent years. According to Holla-Maini, the spectrum contention between the mobile and satellite industries is focused on the 3.5 GHz and 28 GHz bands, also called C-band and Ka-band, respectively. Both bands are the most popular spectrum for 5G trials and deployments according to our recent report, but both are also the essential bands that power some satellites.

The International Telecommunication Union's World Radiocommunication Conference 2019, or WRC-19, affirmed the mobile use of the 3.5 GHz band but excluded the 28 GHz band in its list of approved mmWave bands for 5G. Holla-Maini welcomed this development, saying that ITU's decision to grant 26 GHz to mobile may keep them from competing with satellites on 28 GHz. This is indeed what we have seen in our 5G report as planned mmWave deployments started shifting from 28 GHz to 26 GHz.

The tug-of-war between mobile and satellite services also extends to business models. Most satellite companies, or satcos, are built on the business model of leasing wholesale network capacity to various service providers, including mobile operators. With the exception of satellite phones, most consumer devices cannot receive satellite signals. Instead, satellites beam signals to terrestrial networks of mobile operators that then relay the signals to consumer handsets.

In other words, mobile operators act as middlemen between satcos and consumers. Intelsat SA Regional Vice President for Asia-Pacific Terry Bleakley argued that moving away from this wholesale model and directly serving customers is the "holy grail" to ensure the competitiveness of satcos. This will take time, but Bleakley mentioned that some satcos are taking the first steps by adding managed services to their business models.

Advocates of the first camp reasoned that the diverse regulatory regimes in the Asia-Pacific region make cooperation necessary. Huang Baozhong, executive vice president of APT Satellite Holdings Ltd., said localization by partnering with industry verticals is required to bring down entry barriers and work around different regulations in the region. He further added that developing use cases is an important thing for any business model, and service providers are already experts with that. According to Huang, if satcos compete with service providers, they will be out of the market sooner.

The futures of mobile operators and satcos are likely intertwined thanks to 5G. While all panelists were bullish on 5G, they also mentioned the satellite industry is often left out of discussions. Some pointed to local regulators that impose speed and latency requirements on 5G deployments that effectively cut satellite networks out of the equation. Some, on the other hand, pointed out that the satellite industry as a whole lacks a unified voice in the global 5G arena.

Still, GEOshare LLC President and CEO Lon Levin believed the global 5G ecosystem has a lot to gain from deeper integration with the satellite industry. "The 5G world is coming faster than you think, yet our infrastructure is not ready to accommodate the massive amounts of data traffic that will occur," said Levin. "This represents an extraordinary opportunity for present and future satellite systems as they help meet the customer's needs."