Assessing The Impact Of COVID-19 On Businesses: Changes Happening With More On The Way


Assessing The Impact Of COVID-19 On Businesses: Changes Happening With More On The Way

The outbreak of the novel coronavirus is forcing companies and organizations around the world to rapidly adapt and change their businesses.  A recent survey conducted by 451 Research, part of S&P Global Market Intelligence, underlines a number of key issues affecting businesses, including:

The information in this article resulted from 451 Research’s Voice of the Enterprise: Digital Pulse, Coronavirus Flash Survey, March 2020.  A flash survey is an unscheduled, event-driven survey with a fast turnaround structured to cover a rapidly evolving situation relevant to tech markets. This survey was designed to measure the impact of the coronavirus outbreak on businesses.  It was conducted between March 10 and March 19, 2020, and represents approximately 820 completes from pre-qualified IT decision-makers.

Note that not all respondents answered each question, so the sample sizes for specific questions vary.

The results of this survey are essentially a snapshot of a specific period of time when events and opinions were changing rapidly.  For example, in the U.S., a state of emergency was declared on March 13, a few days after the start of the survey.  It is very likely that among U.S.-based respondents their organizational actions, and their overall view on the potential severity of the crisis, evolved during the time the survey was conducted.

The respondents are representative of small and midsize businesses, along with large enterprises in both the private and public sectors. The respondent base is geographically split as follows:

By industry, the largest respondent groups are:

The companies’ responses serve as a stark indicator of the short-term economic consequences of the pandemic, where the majority of respondents were either currently experiencing or expecting within three months to experience negative outcomes on nearly every segment of the survey.

The most serious issue for respondents was reduced access to clients or prospects, with two-thirds already experiencing and an additional 14% expecting to experience within three months, which equates to four of every five respondents. Only 17.3% responded that they expect no impact. This response gets at the root of serving customers and gaining new ones, and will have significant medium- to long-term impacts if the coronavirus remains for any length of time. This response in turn relates to a loss or reduction in customer demand, which was being seen by 32% of respondents, with an additional 26.1% expecting it within three months. 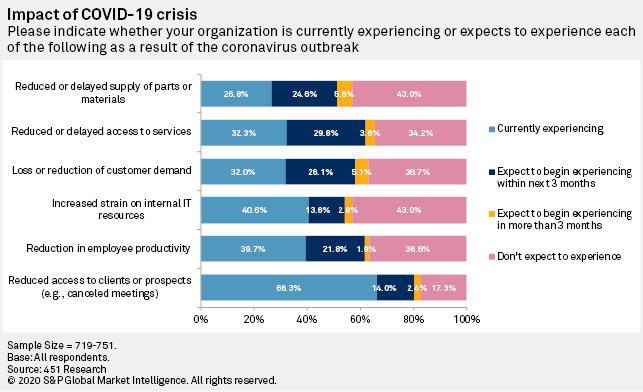 Reduced employee productivity was being felt by just under 40% of respondents, with an additional 21.8% expecting to face it in the short term.  Reduced productivity on the supply side will hurt, but reasons for the reduction cannot be pinpointed.  If it is simply a short-term result of transitioning office workers to their homes, then it might be overcome in relatively short order and could relate to the 40.6% of respondents that were seeing an increased strain on IT resources, as web-based productivity solutions and virtual private networks, or VPNs, are more heavily used.

A significant 43% share of respondents did not expect increased strain on IT resources, possibly indicating that many companies already have large work-at-home contingents.  However, that response also may be an effect of the timing of the survey, which was relatively early in the worldwide spread of the coronavirus.

Just under one-third of respondents were experiencing reduced/delayed access to services, with an additional 29.8% expecting it soon.  This serves as an interesting comparison to the response on reduced/delayed supply of parts and materials, with a slim majority of 51.4% currently or expecting to see that issue in the short-term.  Both responses get at the responsiveness of the part or service supply chain.  A significantly larger 43% did not expect parts or materials shortages, compared to 34.2% on the service side.  Overall, the greater sensitivity to services may indicate a perceived need for specific services compared to parts/materials.

When queried about the changes to spending due to the coronavirus outbreak, by far the most impacted segment of respondents’ expense portfolio was business travel.  Over 87% of the respondents noted that they were spending less money on travel, a result that is unsurprising based on the cancellation of conferences, trade shows and face-to-face client meetings.

Also notable was a significant bump in expenditures on IT resources and assets.  Thirty-four percent of the respondents stated that their companies had increased spending in this category, with the potential expenses likely going toward cloud-based collaborative platforms (i.e. video conferencing, data sharing apps, etc.) and both hardware and software to support home-based workers. 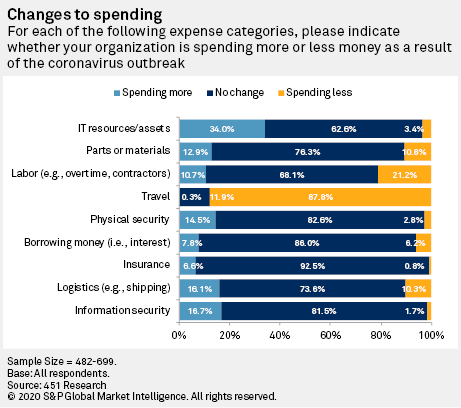 While there were modest increases in expenses on things like parts and materials, labor, physical security, logistics and information security, the majority of respondents indicated there had been no real change to their budgets for these expenses.

In response to what each company is experiencing from suppliers and customers, the pandemic is affecting planning as well.  Among those plans that companies have delayed, reduced or halted, hiring staff was the most popular response, at 34.4%, indicating that the growing unemployment claims in the U.S. and in some other countries will likely result in a downward revision for the first half of 2020, if not beyond.

New products or services were also affected, according to 22% of respondent companies, indicating that future plans have already been influenced.  Less altered by the pandemic were companies’ geographic expansion and strategic partnerships, named by only 10.5% and 10.3%, respectively.  Merger and acquisition activity was slightly less affected, at 8%. 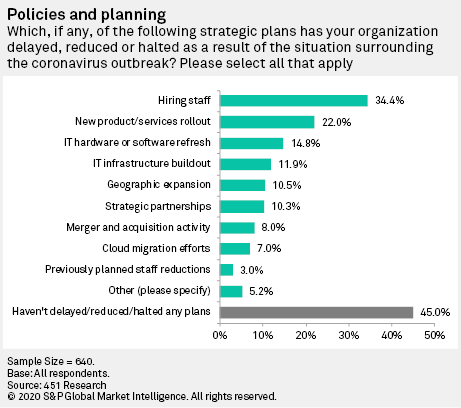 Internal IT plans have been negatively shaped as well.  Just under 15% planned to delay, halt or reduce IT hardware and software refreshes, with 11.9% of respondents naming IT infrastructure buildout plan being delayed, reduced or halted.  This has the potential to negatively influence the entire IT supply chain, indicating the potential economic fallout from the pandemic.  Cloud migration efforts had been less affected, at 7% of survey respondents.  It may be possible that cloud migration efforts could increase with the pandemic, as internal IT resources become stretched, and the need for additional services such as video conferencing come to the fore.

A large slice of those surveyed indicated that they had not delayed, reduced or halted any plans.  However, as noted previously, this survey was taken in the early days of the coronavirus, when it was primarily limited to Asia.  Presumably, as it has spread worldwide, more company plans have been affected, and this percentage would decrease. 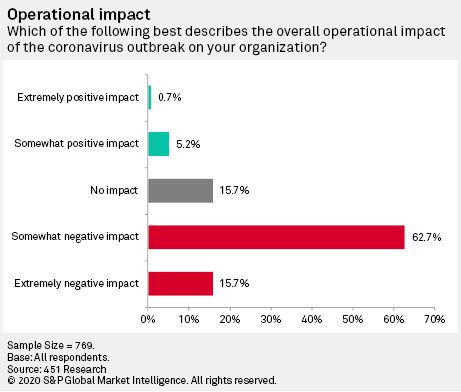 As for the handful of respondents indicating a positive impact, it is highly likely that some companies, such as cloud computing services, IT support and even some telecommunications service providers, are actually experiencing business-related benefits due to circumstances surrounding the coronavirus outbreak.