A recurring theme at this year's 5G Core Summit was that implementing 5G is not building a network for a single customer but for a whole society. To accomplish this, the 5G core needs an open and digital infrastructure defined by software that takes advantage of digital technologies such as cloud-based networks and software-defined network programmable connectivity. The summit, held in Madrid Sept. 24-25, featured operator, vendor and regulator presentations on how the industry needs to change its thinking of the 5G network to bring in new revenue streams as well as have multivendor core capabilities.

According to Enrique Blanco, global chief technology and information officer at Telefónica Spain, it is key to have different vendors offering different components to the 5G core to take advantage of 5G's full potential in terms of services — meaning no single vendor or country should control the end to end of the 5G core network. To achieve this, service providers need to consider three factors when establishing 5G core networks: open sourcing, network slicing and security.

Franz Seiser, vice president at Deutsche Telekom AG, described open sourcing as a game-changer in 5G. Less software coming from one supplier allows for faster functionality cycles because of the ability to focus on one piece of software at a time. This leads to more competition on the supply side, which is a boost for innovation. Paul Ceely, director of network strategy at BT, echoed the need for open source, arguing that in order to cope with the increase in data traffic 5G is set to bring from different verticals, the core network needs a huge amount of flexibility. The full range of these verticals is still unknown to most, so the platform needs to be extremely flexible to allow for new applications as they are needed over the next 10 years.

Lucy Lombardi, senior vice president of digital and ecosystem innovation at Telecom Italia, built on this argument. Lombardi said with the heavy investments made in 5G, operators need to be effective in optimizing investment strategies, and open source needs to be a strong focus for this to be achieved.

Network slicing is the process of separating several virtual networks on the same physical network infrastructure for the delivery of different services. Each slice has its own end-to-end network management to support a particular application. The concept of network slicing is not a new one and has been implemented partially by network sharing technology, but its potential has expanded with the arrival of 5G. During her presentation, Maria Cuevas, principal manager of the mobile and 5G research team at BT, said, "New technology enablers have come along such as network function virtualization that have allowed for more flexibility and network slicing. Network slicing in 5G is key as it gives way for complete end-to-end tailored slicing, allowing operators to serve the requirements of multiple business purposes in the most cost-effective way possible." 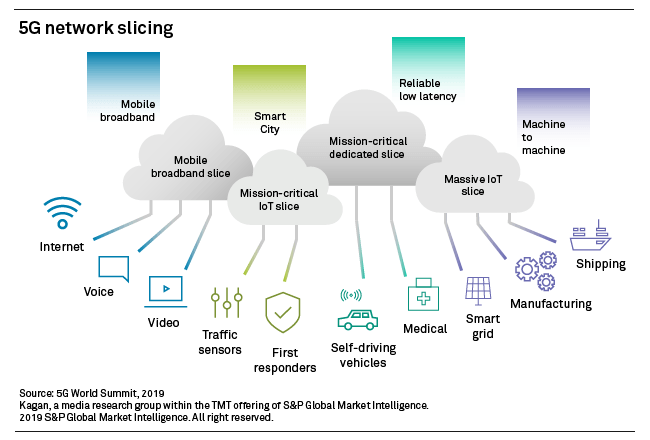 This end-to-end tailoring means operators can break down bandwidth, latency and chain network function virtualization to ensure the delivery of key functions and services in the internet of things domain use the 5G core as efficiently as possible.

Unlike its predecessors, the 5G use case is integrally different due to its ultra-low latency and exponentially faster output — its main strategic motives and selling points lie in IoT rather than the consumer segment. Moving away from business-to-consumer and into the business-to-business market brings about a higher need for increased security as there is less tolerance to risk.

According to Lise Fuhr, director general at ETNO, when thinking about mass IoT adoption such as remote telesurgery, self-driving cars and electricity on demand, operators need to consider how to secure infrastructure against the specific IoT service being delivered. Network slicing is key to this. Walter Wang, president of Huawei wireless and cloud core network marketing and solution sales at Huawei Technologies Co. Ltd., echoed the importance of network slicing in 5G security but also said there is a strong need for artificial intelligence to allow for predictive analytics and security automation to support machine learning algorithms and manage the complexities of the network.