On average, surveyed advertisers indicated they planned to place 43% of their 2020 total CTV ad spend directly with advertising platforms with an increase of three percentage points expected in 2021.

Advertisers surveyed appear to be taking advantage of multiple options for CTV ad inventory by spreading their ad spend among many suppliers. Pay-TV aggregator services ranked highest with respondents, receiving an average of 18% of their CTV ad spend.

Programmatic or automated trading is slowly overcoming the poor reputation it developed in the display market, but it still has a long way to go before advertisers are comfortable committing their connected TV, or CTV, ad spend there. According to Kagan's July 2020 survey of 90 U.S. CTV advertisers on their preferences, respondents reported spending less of their 2020 ad spend programmatically than through a direct deal with the inventory supplier. Programmatic open marketplaces received less spend from our respondents than private marketplaces.

On average, surveyed advertisers indicated they planned to place 43% of their 2020 total spend directly with advertising platforms. Respondents expect this will increase 3 percentage points in 2021, to represent an average of 46% placed directly. Survey respondents reported that advertising spending through ad agencies and spending on programmatic ads through private markets will remain essentially unchanged over the two year period. Spending on programmatic ads through the open market is expected to decline 3 percentage points to 11% of total annual advertising spending from 2020 to 2021. 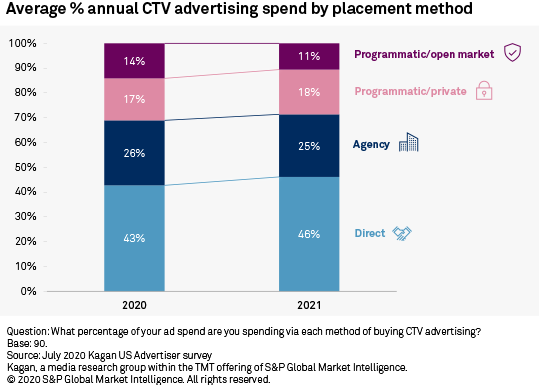 Just as advertisers have choices on how they want to buy, they also have many choices among inventory suppliers, which can be a challenge. It seems most advertisers at this time are taking advantage of many options for CTV ad inventory suppliers by spreading their ad spend among the options. Only one respondent devotes more than fifty percent of their ad spend in any one category and only 23 apply more than 25% in any one category.

In averaging the survey responses, pay-TV aggregator services received a greater percentage of ad spend from more respondents at 18%. The next most popular choices are the device platforms such as Roku and Amazon, TV network apps and free ad-supported platforms. The spreading of ad spend between many platforms is expected as many advertisers are still experimenting to figure out which platforms deliver the ad impressions that help meet their business goals.